Accessibility links
The Truth About Ugly Foods: They're Delicious, Abundant And Good For The Planet : The Salt From ugly fish like sea robin to the discarded parts of livestock, like ox cheeks and chicken feet, a new book celebrates repugnant-looking but flavorful foods, and urges us to eat more of them. 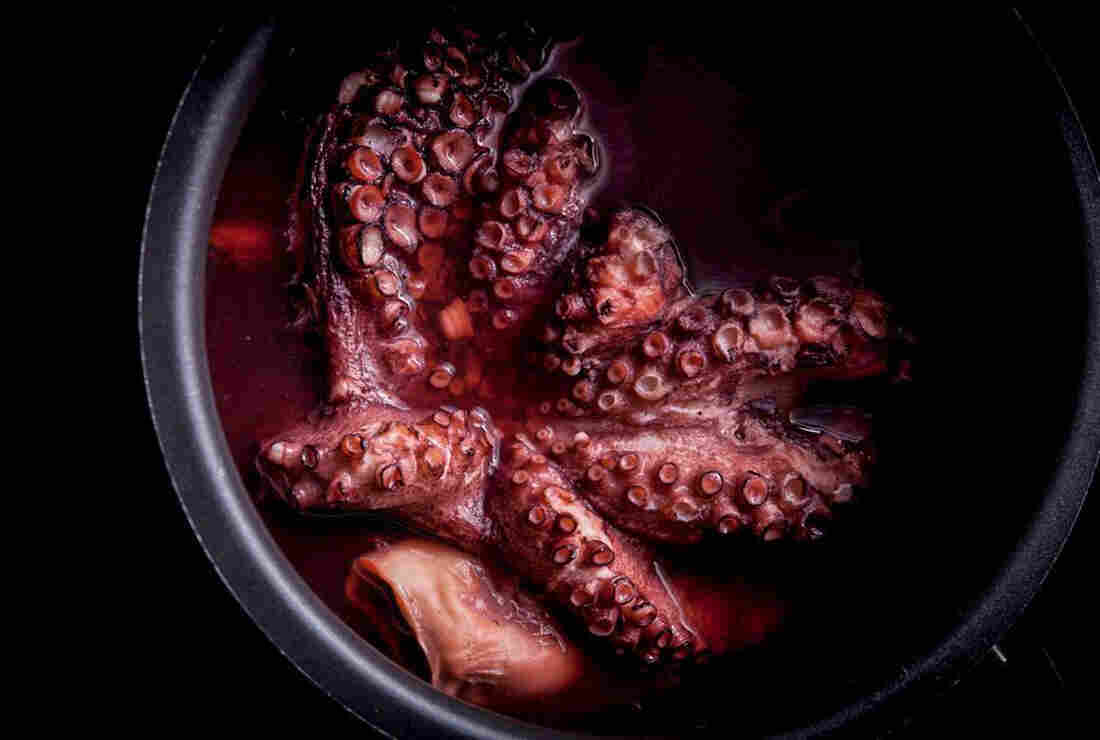 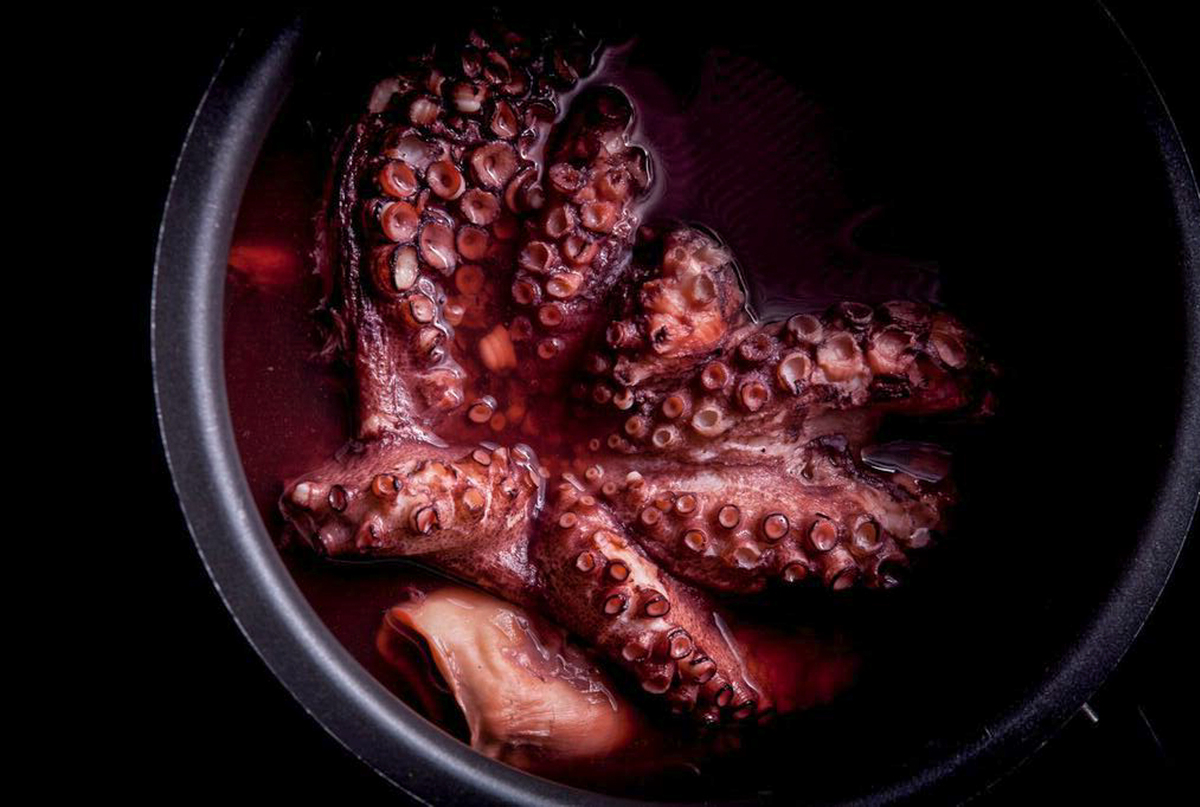 Boiled octopus, a recipe for "reliably tender, flavorful octopus that can be used as it is, or as a basis for fried or grilled octopus dishes," write Richard Horsey and Tim Wharton in Ugly Food. "Octopus is also totally sustainable, very economical and incredibly versatile — the various methods of preparation and cooking lend it subtly different flavors," says Wharton.

Wharton's provocative new book Ugly Food: Overlooked and Undercooked, written with fellow gourmet Richard Horsey, is a celebration of the gustatory pleasures of octopus and other beasts and plants less eaten. The authors make an impassioned case for why we should prefer the likes of sea robin, a plug-ugly whiskered fish found along America's eastern seaboard, to the comelier but parlously-overfished Atlantic cod and its kin.

Horsey and Wharton met as grad students at the University of London in the 1990s, bonding over a mutual love of food on a trip to California. They found the academic conference they were attending underwhelming, but accomplished their extra-curricular mission, says Horsey, "to blow all (our) money on the best food we could get."

Ugly Food is a love letter to the dishes Horsey, an international political analyst based in Myanmar, and Wharton, a musician-turned-academic at the University of Brighton in southern England, have encountered in their quest to delve "beyond the [chicken] breast." But the recipes it serves up — Maldivian curried octopus, boiled sheep's head from Scandinavia, rabbit stifado from Greece, French giblet pie and, of their own devising, ice-filtered squirrel consommé among other delicacies — throw into sharp relief a mainstream Anglo-American food culture fixated on the sanitized presentation of flawless specimens of a few favored foods. Besides being a cookbook, Ugly Food is equal parts culinary "manifesto," earthy polemic and disquisition into why we embrace some ingredients but balk at others no less nourishing and delicious and often considerably cheaper.

Actually, ugliness isn't the half of it. For every homely fish in Ugly Food there are cute critters like rabbit or squirrel that are similarly spurned — anything in fact that evokes an "emotional reaction, positive or negative," according to Horsey and Wharton.

"The food industry, like the fashion industry, seems driven by the pursuit of impossible perfection," they write. "Endless rows of blemish-free fruit and vegetables in supermarkets that taste of not-very-much. Pre-packaged meats with nary a head or foot or tail in sight. And a steady stream of cookbooks and articles with Photoshopped, super-saturated photos of beautiful dishes bathed in summer sunlight." 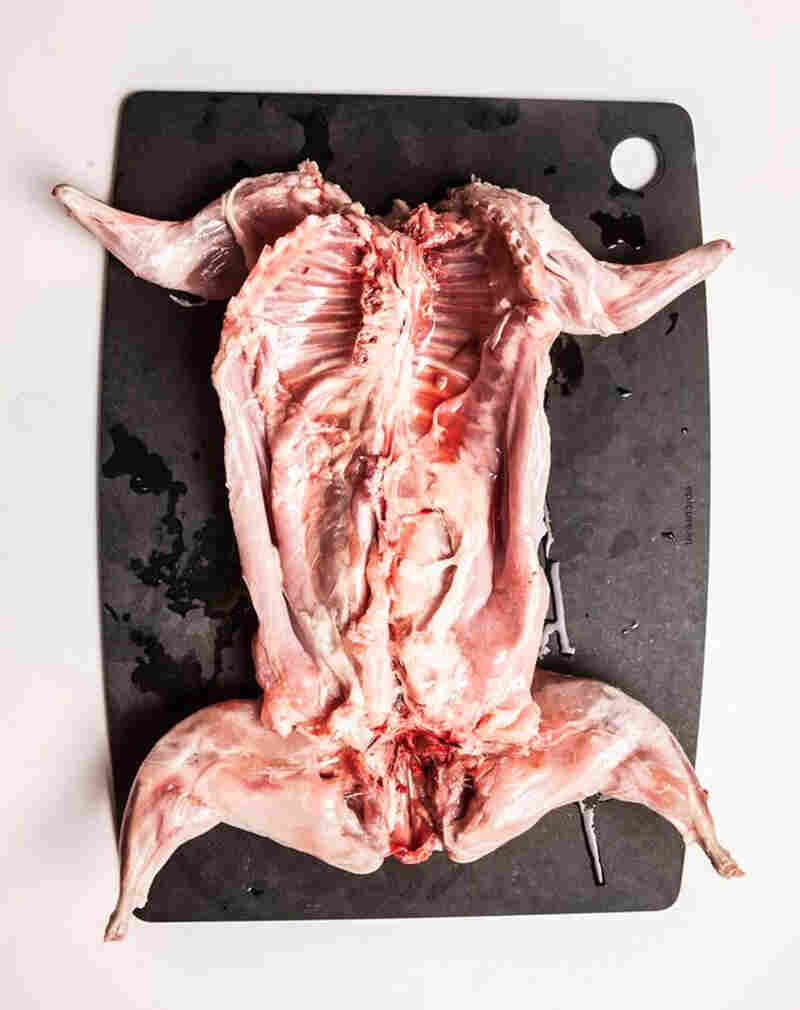 Rabbit, skinned and gutted, and ready to be made into rabbit stifado (a Greek stew with wine and onions) or rabbit ragu with penne and parmesan, a recipe devised by Horsey that has received rave reviews from Ugly Food readers in the UK. Courtesy of Tanya Ghosh hide caption

As a result, we've become estranged from the "messy reality" of the origins of food, says Horsey. Any sign of life — blood, guts, feathers, mud — is "suspect."

This is a relatively recent phenomenon, Horsey and Wharton note. Many foods we shun now were once staples in Britain, Ireland and America.

In perhaps the most celebrated English-language novel of the 20th century, set in Dublin on June 16, 1904, James Joyce introduces Ulysses' everyman lead character with a description of his culinary habits:

"Mr. Leopold Bloom ate with relish the inner organs of beasts and fowls. He liked thick giblet soup, nutty gizzards, a stuffed roast heart, liver slices fried with crustcrumbs, fried hencod's roes. Most of all he liked grilled mutton kidneys which gave to his palate a fine tang of faintly scented urine."

It's a menu of items that have long since disappeared from most of our plates. But it isn't only the impoverishment of diets and loss of culinary heritage that Horsey and Wharton lament. Confining ourselves to a narrow range of foodstuffs promotes unsustainable fishing practices, focused on a few prized species, and intensive factory farming, they write. Then there's the sheer waste from discarding perfectly edible fish outside the approved canon, not to mention the carbon footprint of shipping produce from afar when it's unavailable locally.

Horsey applauds the movement to rehabilitate "misshapen" fruit and vegetables and push supermarkets to stock them at markdowns for "highlighting waste in the supply chain." But he worries that selling them at a discount stigmatizes them as inferior when they're no less tasty than their perfectly formed brethren along the aisle. Besides, it reinforces a food production system that extols beauty over flavor, he adds. No supermarket carrots, pristine or otherwise, are going to taste very good, he says, because they're "cultivated for appearance rather than taste."

Ugly Food pushes a more radical agenda. "[We can] get tasty, sustainable, environmentally sound ingredients," says Horsey, "if [we] move away from the idea of the food industry as a purveyor of impossibly perfect ideals and start seeing it as a purveyor of grubby things that... taste great."

Horsey applauds the efforts of certain food TV personalities to "demythologize" unfamiliar and, yes, ugly food. Still, this often takes the form of a "dare me to eat it" approach that "exceptionalizes" such items, he says.

Horsey and Wharton conceive of their mission in more practical terms. Many of the ingredients they spotlight can seem a little exotic and far from table-ready. So Ugly Food offers techniques to cook ingredients like octopus (delicious braised, boiled, blanched or dried) and make them more approachable.

"People [don't] need to visit an expensive restaurant to experience this," says Wharton. "[It's] something they can do themselves." For example, buying a whole fish and freezing the head and bones to make soup or stew, he says.

Horsey and Wharton are already plotting a sequel to show home cooks how to shop for cheap and flavorful ugly food.

Take giblets, says Horsey. "They're not expensive and really are quite delicate and approachable."

"A char-grilled chicken heart... with plenty of salt and some lemon is my favorite part of a chicken," adds Wharton. "It's just a shame they only have one small heart."

Stephen Phillips is a writer in Portland, OR. His work has appeared in The Los Angeles Times, The San Francisco Chronicle, The Financial Times, Times Higher Education, the South China Morning Post and on The Atlantic's website.