Accessibility links
Vegan Cookbooks Spill The Beans About Aquafaba, The Eggless Egg White : The Salt The discovery that the liquid from canned beans can be whipped into an egg white substitute has taken the vegan world by storm. Now DIY recipes are being codified into cookbooks. 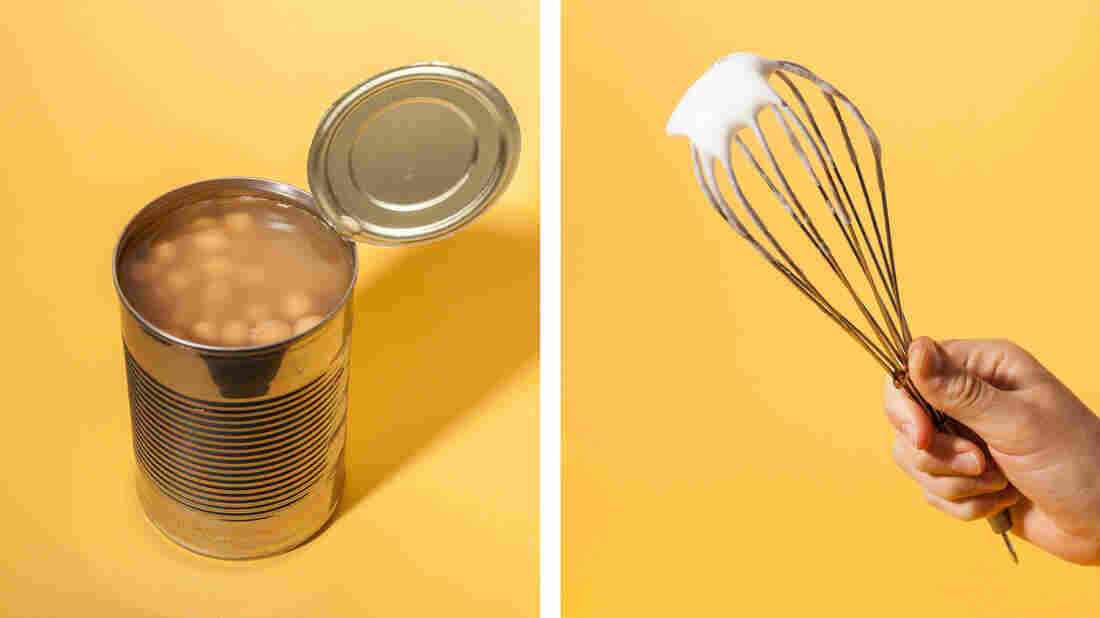 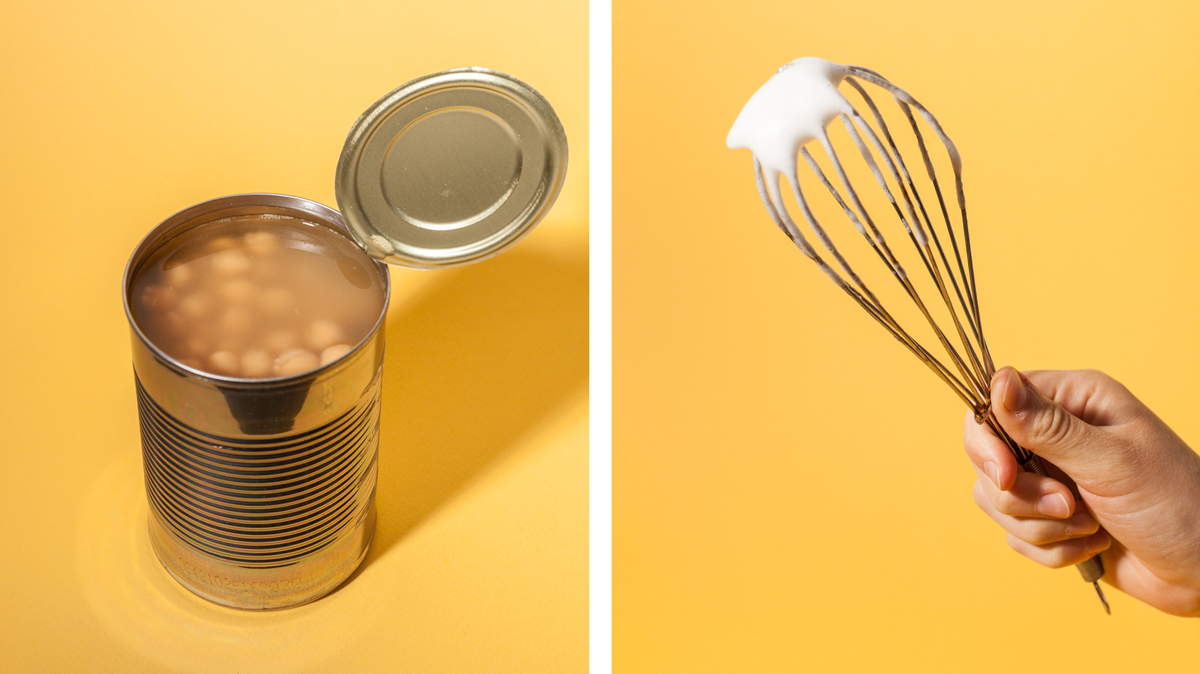 Aquafaba, commonly made from chickpea water, can be whipped into a stiff foam for an excellent vegan replacement for egg whites.

And useful, to boot!

Save that canned water,

And whip it to foam

It's an egg-white replacement

Made right at home!

OK, so it's not the playground rhyme you grew up with. But with the avid following that canned bean water — more appetizingly known as "aquafaba" — has gained in just a few short years, maybe it's time that rhyme got rewritten.

Aquafaba is commonly made from chickpea water, though some people have used soy or neutral-tasting beans like cannellini as a base. Whipped into a stiff foam, it's an excellent replacement for egg whites – and a cause for rejoicing among vegans.

The name aquafaba (loosely, a combination of the Latin words aqua, for water, and faba, for beans) comes courtesy of Goose Wohlt, a software engineer and vegan who stumbled across the magic ingredient in 2015, while looking for a way to make egg-free meringues for his mother's Seder. To crowdsource the process, Wohlt started working with a vegan Facebook group. Today, that group has more than 68,000 members, who post recipes and photos of dishes made with aquafaba, and the occasional "What am I doing wrong?" question.

After two years of rallying from the vegan community and others experimenting with "eggless" egg whites, these DIY recipes are now getting codified into cookbooks devoted solely to the pulse miracle that is aquafaba. In October 2016, vegan cookbook author and blogger Zsu Dever released the first of these books: Aquafaba. This month, vegan blogger Rebecca Coleman's Aquafabulous will also become available.

"The fact that we can take this liquid from beans and make it into a whole slew of delectable dishes is just incredible," Dever told NPR.

Egg whites are a culinary workhorse that omnivores frequently take for granted. Without them there are no foam-topped cocktails, no meringues, no mousses, macarons, or angel food cakes — just to name a few. So the discovery of aquafaba has been like "an explosion in the vegan community," Dever writes. 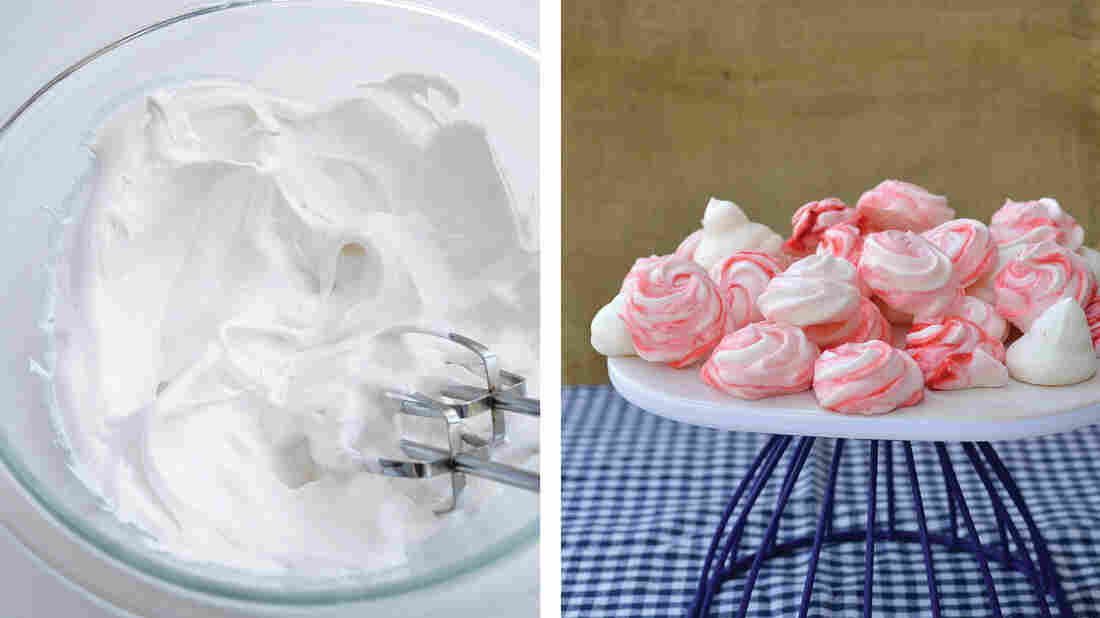 Egg whites are a culinary workhorse that omnivores frequently take for granted. It took a lot of trial and error to figure out how to use aquafaba as an egg-free substitute in dishes from meringue to brioche breads and more, says vegan blogger and cookbook author Zsu Dever. Courtesy of Aquafaba/Zsu Dever hide caption 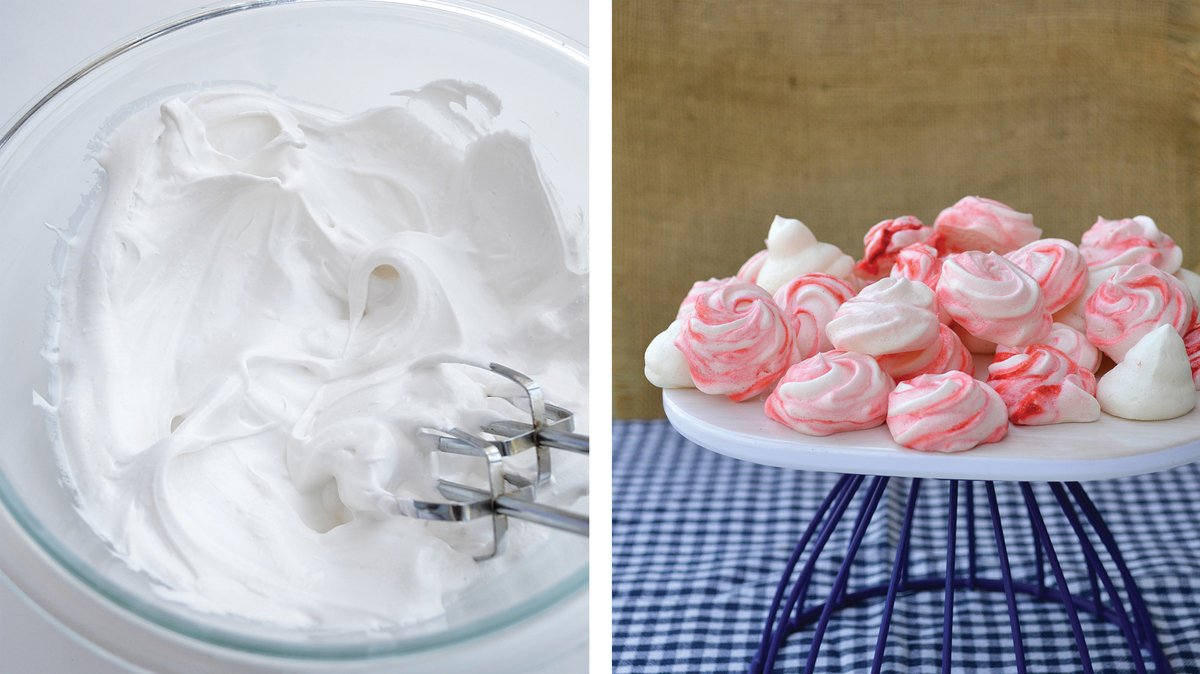 Egg whites are a culinary workhorse that omnivores frequently take for granted. It took a lot of trial and error to figure out how to use aquafaba as an egg-free substitute in dishes from meringue to brioche breads and more, says vegan blogger and cookbook author Zsu Dever.

In Aquafaba, Dever puts the not-so-secret ingredient through its paces, providing a variety of sweet and savory recipes, including vegan butter, cream cheese, doughnuts, challah and brioche breads and more.

Testing these recipes using aquafaba was no small task. Dever says there was a lot of experimentation: In total, she used 100 pounds of sugar and 150 pounds of chickpeas to test all of the recipes in her book.

"This wasn't something where [the recipes] just needed to taste good and look good," Dever says. "They needed to actually work — and not just in my kitchen."

While making meringue, Dever discovered, aquafaba would refuse to whip if there was any oil in the bowl. If the mix was too diluted, Dever says, the meringue would deflate.

But what is it about bean water that makes it such a multifaceted addition to the kitchen?

Though Wohlt crowdfunded some nutritional information on aquafaba, his website devoted to the ingredient is clear about the fact that there's still very little understanding of its chemistry. "Aquafaba is unique among egg replacers in that it captures some but not all of the characteristics of both egg white and yolk," he writes. "It can be used as a thickener, binder, emulsifier, foaming agent, and more."

Likely because aquafaba is still very much a grassroots product (I have yet to see jars of aquafaba sans beans sold in grocery stores, though surely it's only a matter of time), there's been little reason for companies to analyze how it works. 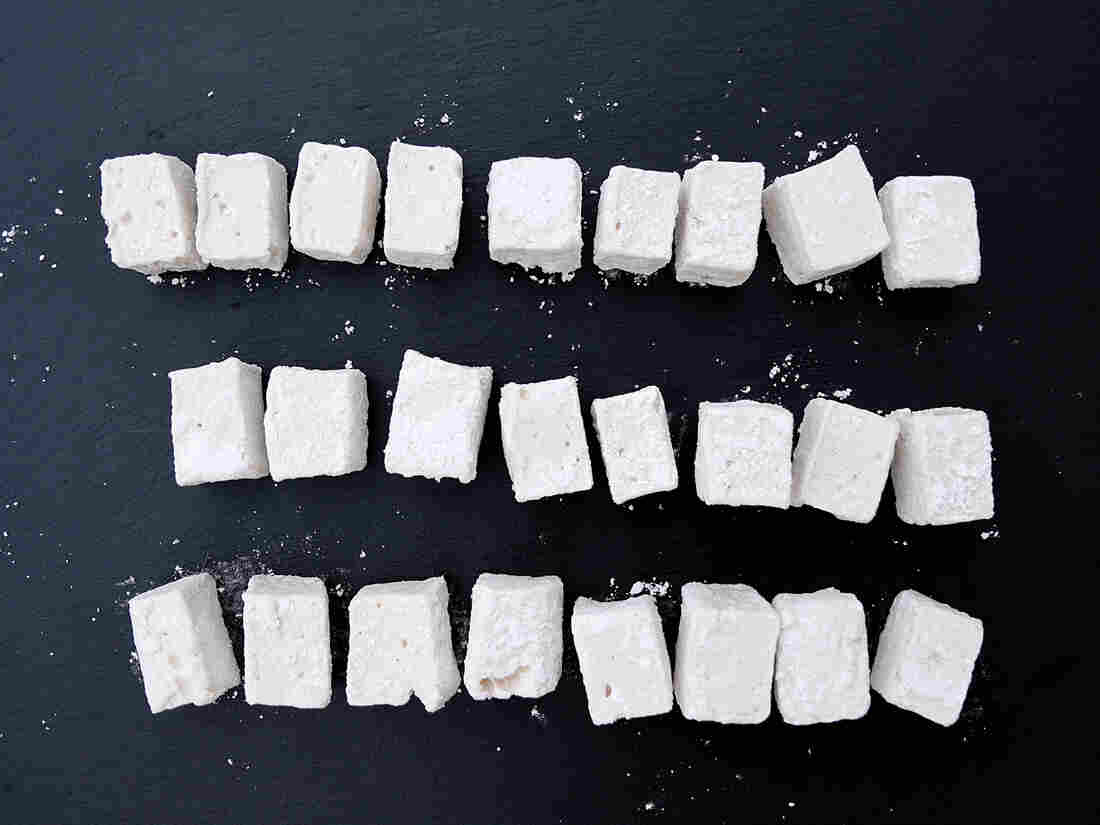 Marshmellows made from aquafaba Courtesy of Aquafaba/Zsu Dever hide caption 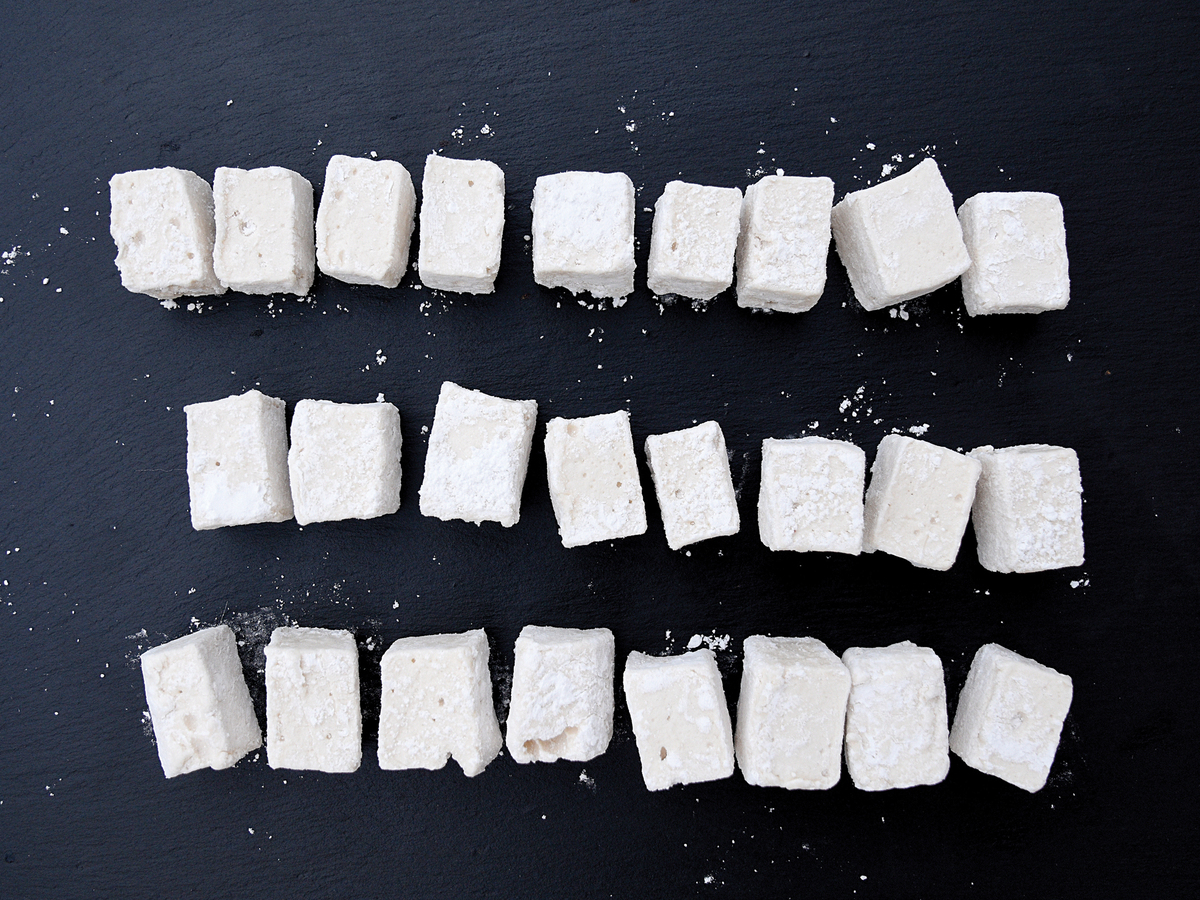 Marshmellows made from aquafaba

So far, only Sir Kensington's condiments appears to have made a big brand commercial food from aquafaba: a bean-water mayonnaise called Fabanaise that went to market in early 2016. Chefs have been quicker to experiment with aquafaba. Dan Barber's Blue Hill restaurant in New York City used chickpea water in its 2015 wastED popup, which made dishes out of ingredients that usually go to waste. Bartenders have put a vegan spin on foamy cocktails like gin fizzes or pisco sours by substituting aquafaba for egg whites.

In other words, beans are growing up. Rather than being the butt of flatulence jokes, bean water is written about almost reverently on cooking blogs. For vegan cooks, its existence is nothing less than a miracle. Even lexicographers love the rebranding of leftover bean water. In recent months, "aquafaba" has been added to the Oxford Dictionaries database.

"As language nerds we were quite pleased by that because it is a compound of Latin words and sounds very nice," Angus Stevenson, Oxford Dictionaries' head of content development, told The Guardian.

Tove Danovich is a writer based in Portland, Ore.