Accessibility links
Is It Safe To Eat Moldy Bread? : The Salt No, say food safety experts. Molds can easily penetrate deep into a soft food, like bread. But you can salvage other foods with tougher surfaces, like cabbages, carrots and hard cheeses. 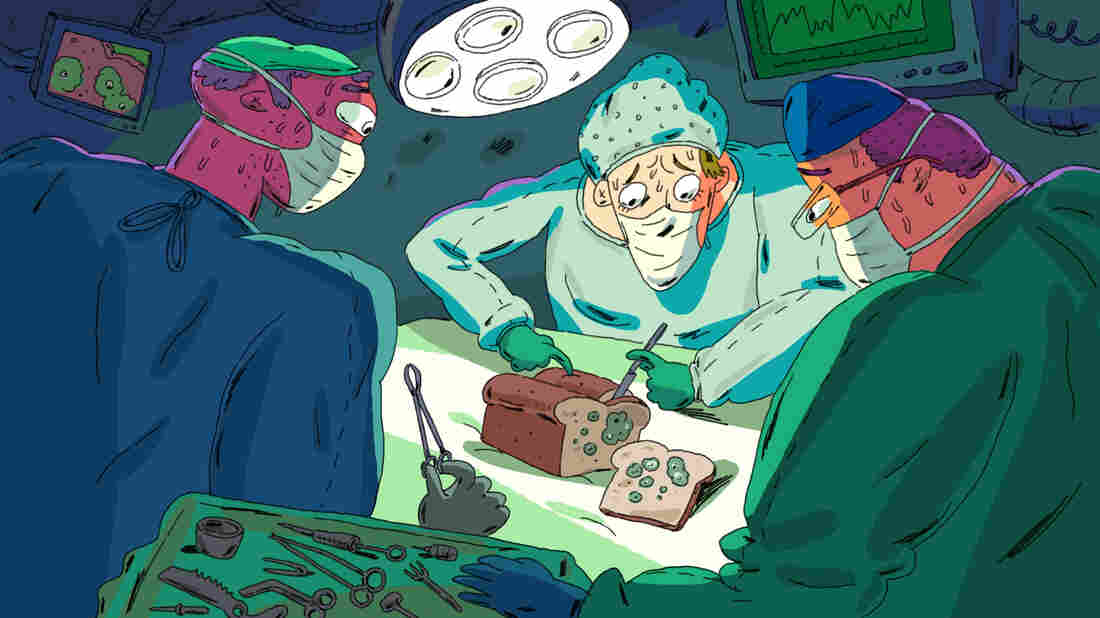 You may be tempted to save a piece of a moldy loaf by discarding the fuzzy bits. But food safety experts say molds penetrate deeper into the food than what's visible to us. And eating moldy food comes with health risks. Alex Reynolds/NPR hide caption 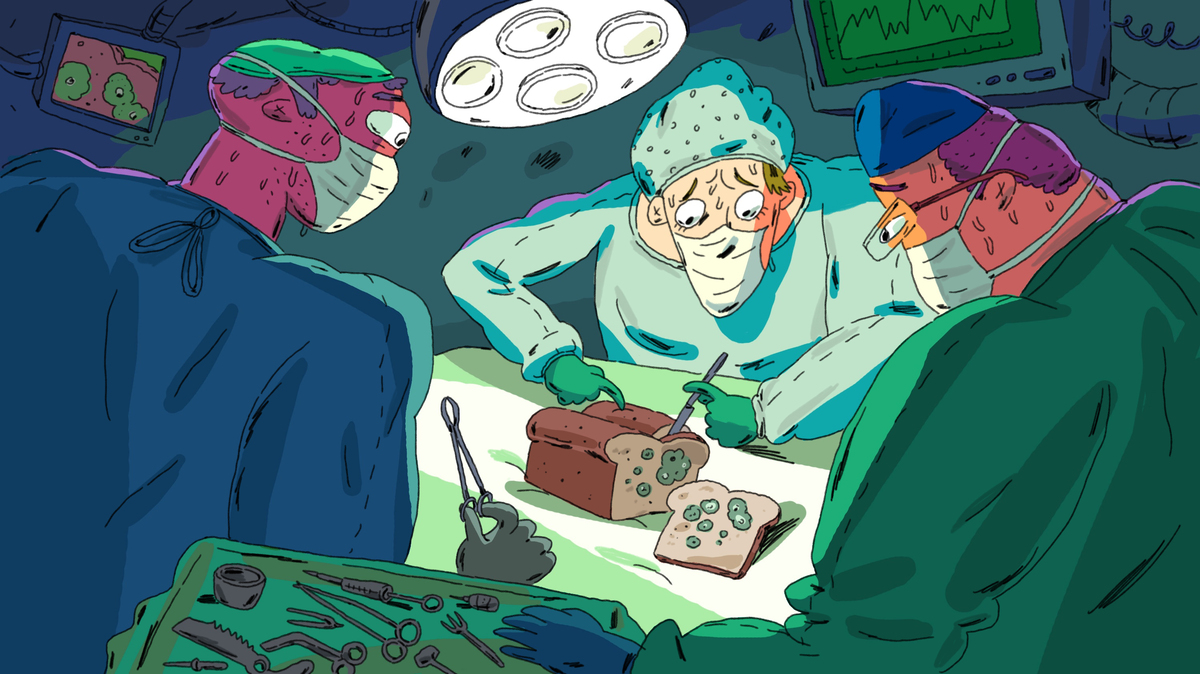 You may be tempted to save a piece of a moldy loaf by discarding the fuzzy bits. But food safety experts say molds penetrate deeper into the food than what's visible to us. And eating moldy food comes with health risks.

Like politics and music, the question of whether to eat moldy food can divide families, with relatives' admonishments reverberating in one's head for years.

"Every time I throw out moldy bread, I can still hear my dad lecturing me: 'That's perfectly good! Just cut that part off! It's penicillin!' " says Shawna Iwaniuk, a graphic designer in Alberta, Canada. "But ... I just can't."

So, who's right? Is the furry green stuff a death knell for a baguette, or just a minor setback?

For food safety experts, the answer is clear: Moldy bread is bad news.

"We don't recommend cutting mold off of bread, because it's a soft food," says Marianne Gravely, a senior technical information specialist for the United States Department of Agriculture. "With soft food, it's very easy for the roots [of the mold], or the tentacles, or whatever creepy word you want to use, to penetrate" deeper into the food.

Molds, which look like mini-mushrooms under a microscope, are actually a type of fungi, with visible spores on the surface and a network of microscopic roots that twist deep below that are often invisible to the naked eye. So a mold's penetration into a piece of bread may be greater than a quick look-over suggests, says Gravely.

You might have slightly more leeway when it comes to sliced bread in a bag: If after careful inspection of the interior and exterior of the bread on a long loaf, you can tell one end is unaffected, keep it, Gravely says. But otherwise, it should be tossed — the fact that bread is sliced is no guarantor that mold hasn't spread.

"I have seen mold spread from one slice to the next," she says.

What's more, by the time mold has moved in, other harmful kinds of bacteria associated with food spoiling may also have infiltrated the food.

Some molds, like those used for Gorgonzola cheese, are safe to eat. But the mold dotting bread isn't a benign source of extra fiber. Gravely says people who eat moldy food may suffer allergic reactions and respiratory problems. Even inhaling mold can be dangerous. To avoid breathing mold, the USDA recommends putting food in a plastic bag and then in a covered trashcan, out of the reach of children and animals.

"I'm sure some people would really want to press the situation, but bread is cheap," says Gravely. "Go buy some more."

Soft fruits, lunch meats and jams also must be tossed once moldy, she adds. But for those who mourn their castaway croissants, there's some good news: Tougher foods are salvageable even after fungus has invaded. Hard cheeses, salamis and vegetables like carrots, bell peppers and cabbage have tougher surfaces, making it more difficult for a mold's roots to move through. So you can excise the mold at the surface before it ruins the food's interior. For such foods, Gravely recommends cutting the mold out with a clean knife, allowing an inch of buffer on each side of a fuzzy patch.

Of course, the best way to cut down on funeral dirges for food past its prime is not to let the food get moldy in the first place. Gravely advises inspecting produce sold in plastic containers before buying it at the store. If shoppers discover a couple of moldy strawberries once at home, no need to jettison the entire bunch — just wash the other strawberries well and make sure the mold hasn't spread. The U.S. Department of Health and Human Services also has an app that helps consumers know how long different types of food generally last. Refrigerating food keeps it fresh longer, and cleaning the refrigerator every few months helps purge any food beginning to mold.

"They're pretty clever and adaptable," Gravely says of mold spores. "They prefer moist environments and warm temperatures, but they can grow in the refrigerator, and they can grow in sweet things or salty things."

But consumers shouldn't feel overwhelmed by the puny kitchen invaders, she says. After all, she adds, remember who's in charge: "Food in your kitchen is completely within your control."

Gnawing Questions is a semi-weekly column answering the food mysteries puzzling us and our readers. Got a question you want us to explore? Let us know via our contact form.