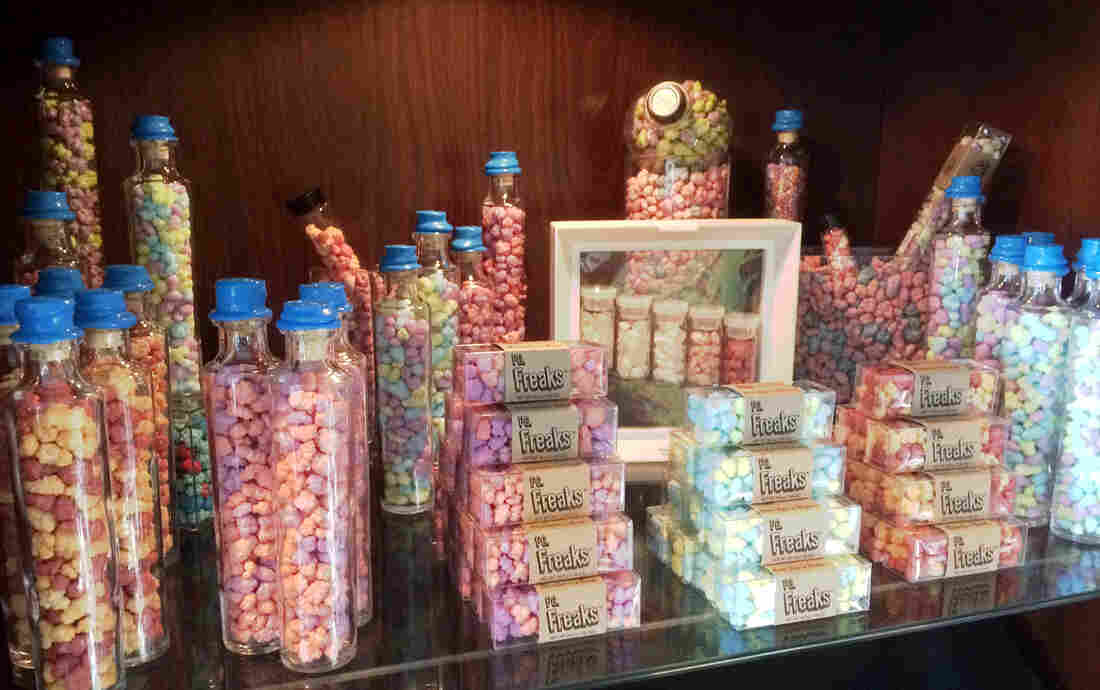 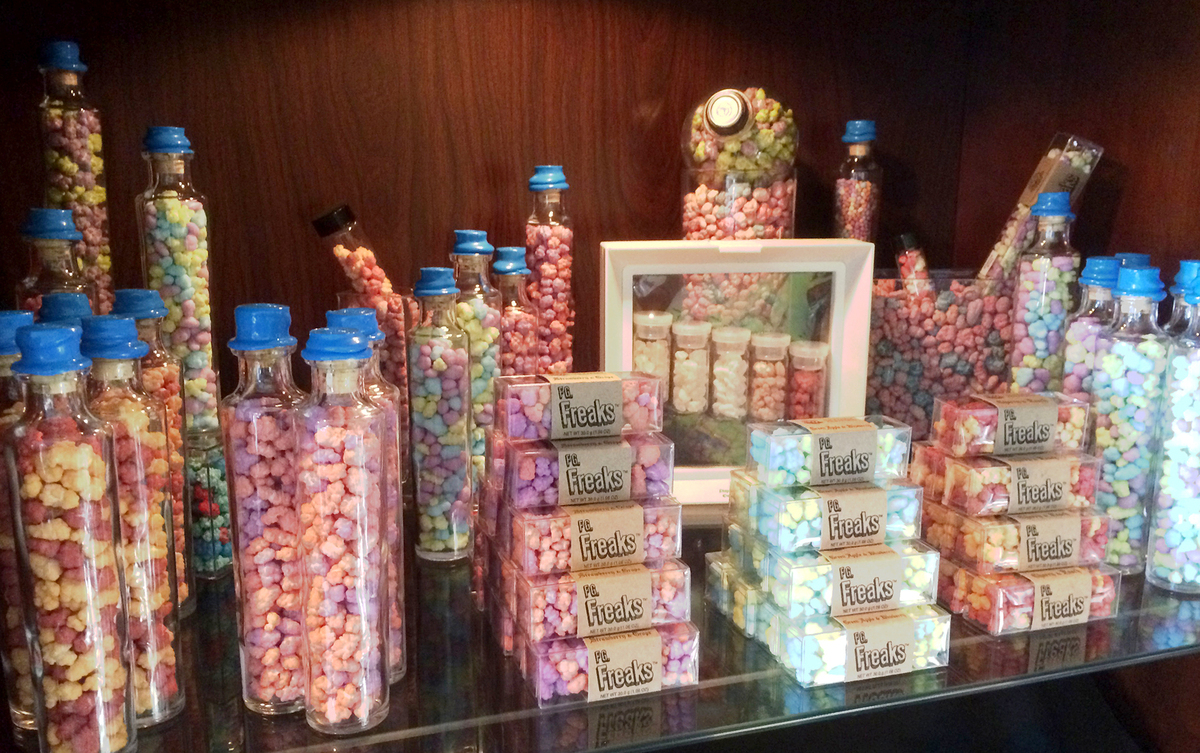 The Eugene J. Candy Co., which opened a year ago in Brooklyn, stocks offbeat novelties like wax fangs as well as its own experimental confections.

Inside a tiny, hard-to-find storefront in Brooklyn lies the darkly whimsical world of a most unusual "candy alchemist."

He calls himself "Eugene J.," and this real-life Willy Wonka is whipping up his own new confections across town from where Roald Dahl's Charlie and the Chocolate Factory will open on Broadway later this month.

Not much is known about this quiet man in black, who prefers to keep the focus on the candy. Behind a purple satin curtain, he toils away on his latest invention. 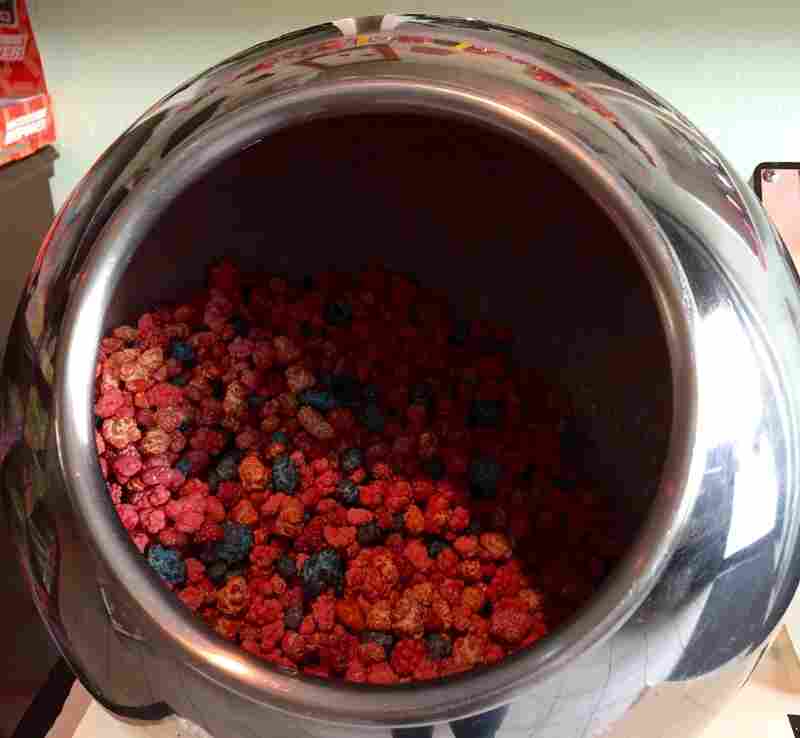 "There are so many variables: the temperature, the humidity, you have to look at solubility charts, when you add certain ingredients, at what compositions, at what times," he explains. "Since it's a seven-hour process, you get kind of taken away. You pretty much have to put in earplugs and enter a state of Zen."

As hundreds of pellets tumble hypnotically inside a revolving silver sphere, Eugene J. recalls some of his earliest prototypes.

"Everyone else had an Easy-Bake Oven," he says. "I had this candy-making kit with a little double boiler and little gizmos to cast gummies into little molds."

Eugene J. studied chemical engineering at Cooper Union, where lab work taught him how to properly conduct experiments, take meticulous notes, and learn from his mistakes. In a small studio apartment, he continued making candy in his spare time.

"They built a kitchenette into a closet, " he recalls, "so I didn't have much in the way of facilities."

But he did have imagination. Using a hot plate and a small convection oven, he fashioned a makeshift lab to fabricate gummies using common household ingredients like corn syrup and gelatin packets. He didn't succeed, but he was undeterred.

After college Eugene J. took a job in green manufacturing, where he dealt with patent applications, quality control issues, and scaling from research and development into production. But he continued his candy experiments after hours. In 2008 he moved to Berlin, not far from a popular nightclub. 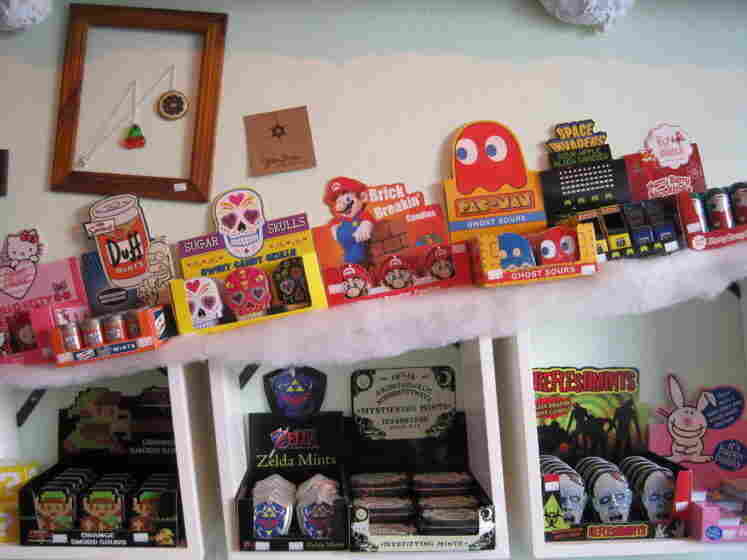 The Eugene J. Candy Co. opened a year ago. It stocks goods made by small-batch candy makers from across the U.S., as well as Eugene J.'s own panned candy, called FG. Freaks – a playful nod to Willy Wonka's rival, Fickelgruber. Courtesy of Eugene J. hide caption 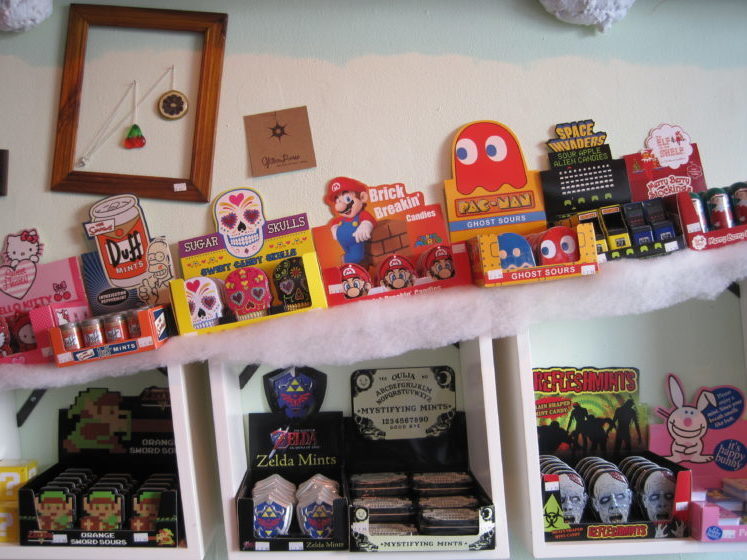 The Eugene J. Candy Co. opened a year ago. It stocks goods made by small-batch candy makers from across the U.S., as well as Eugene J.'s own panned candy, called FG. Freaks – a playful nod to Willy Wonka's rival, Fickelgruber.

"I would bike out at 2 a.m. and out of a briefcase sell my double-sided lollipops" to club-goers waiting in line outside, he recalls.

They sold well, encouraging him to keep stretching taffy late at night in his mostly empty apartment, using pots and pans and scales he brought with him from New York and a heat lamp purchased from a local hardware store. (He had to wear dark sunglasses to protect his eyes.)

When he moved back to New York, Eugene J. left engineering behind to apprentice at Dylan's Candy Bar, stocking shelves at what's billed as the world's largest confectionery emporium. What he lost in salary, he gained in inspiration.

"Stocking Wonka Nerds and Wonka Runts or Wonka SweeTARTS, you know, Wonka was fully in my head," he says.

Eugene J. was promoted to the corporate office at Dylan's Candy Bar, but never stopped thinking about making candy. He began acquiring equipment, such as a panning machine, which uses a motorized tumbler to apply an outer shell to candies like Skittles or M&Ms. Learning how to work with it involved a great deal of trial and error.

He knew, for example, that making the shells also involved a drying process, but without formal training, he tried using a blow dryer. The technique earned him "most fab hair" at Dylan's, but it proved less effective for confectionary use, blowing candy dust into his face.

A year ago, he opened his own little spin on Wonka's world: the Eugene J. Candy Co. He stocks wax fangs, gummy brains and scads of other offbeat novelties made by various small-batch manufacturers across the U.S. And he also makes his own candy, called FG. Freaks – a playful nod to Willy Wonka's rival, Fickelgruber.

Like Wonka's Nerds, FG. Freaks are tart and crunchy, but much larger — with a misshapen outer shell, like the surface of a cartoon moon. Making them is difficult, especially for a small batch candy maker without access to automation and other large-scale manufacturing resources. Some of Eugene J.'s first batches were thorny, a look he says he still loves but found impractical for packaging.

As he works on his current version, he's happy to demonstrate how he adds sugar syrup to the batch in progress, but when pushed for details, he's not entirely forthcoming.

"You're in Wonka's realm now," he says with a mischievous laugh, "so anything is possible."

When the batch is complete, he funnels the FG. Freaks into a glass apothecary jar, stamps the wax top with an off-kilter jack-o'-lantern that's his insignia, and places it on a slanted shelf – part candy, part curio.

Pleased with the results, he finally reveals his secret: "There's something to embrace about the perfectly imperfect."

Allyson McCabe is a journalist based in New York City.