Accessibility links
Waste Not, Want Not: Why Aren't More Farms Putting Poop To Good Use? : The Salt Digesters convert livestock manure into electricity. Farmers can use it to power their operations or even sell some back to the grid. But some have found the technology too pricey to maintain. 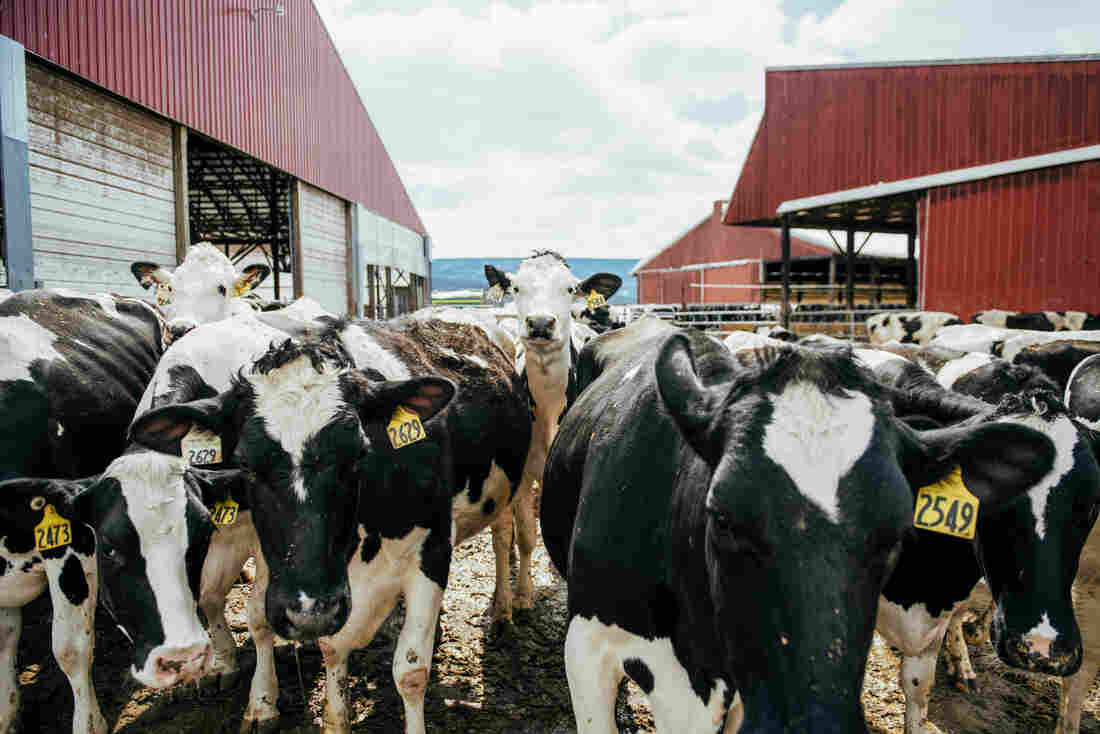 Reinford Farms has 700 dairy cows. As you can imagine, they produce a lot of ... um... material to be converted into electricity. Dani Fresh for WHYY hide caption 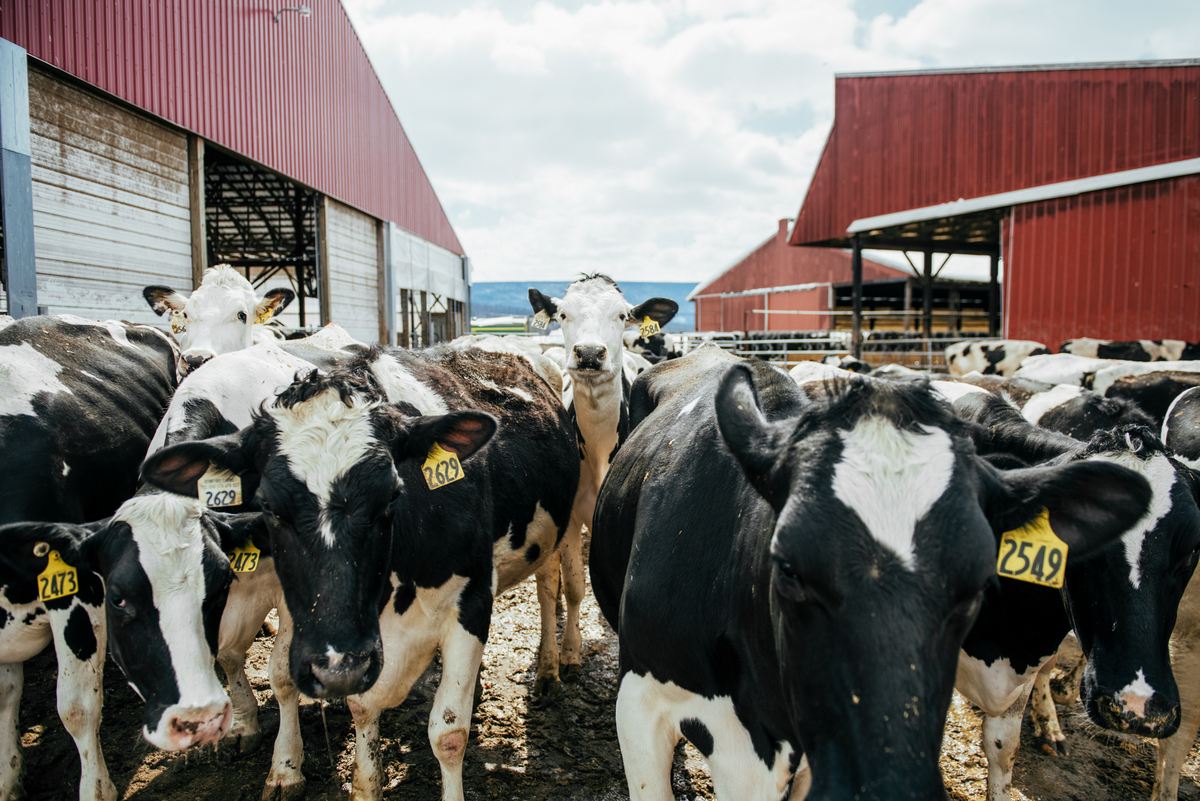 Reinford Farms has 700 dairy cows. As you can imagine, they produce a lot of ... um... material to be converted into electricity.

The 700 cows on Brett Reinford's dairy farm are making more than just milk.

Each day, the girls are producing 7,000 gallons of manure. And that smells exactly like you'd imagine. "We had gotten complaints from neighbors in the past that had said, 'Hey, it stinks too much. Can you do something about it?' " Reinford says.

So he looked around for a solution and landed on a device called a digester. A digester tamps down the smell a bit, but, more importantly, it takes all that cow poop and converts it to electricity.

Everyday, a farm worker climbs on a machine that looks like a snow plow and then shovels the manure down a ditch that leads to a 16-foot hole in the ground.

That giant hole in the ground is the digester. But at Reinford's farm there's not just manure down in the hole. A local supermarket chain pays him to take its leftover produce. For some grocery stores, that's cheaper than sending it to a landfill — and that food waste is the added ingredient that makes this digester a success.

Inside there's 20 tons of lettuce, celery and broccoli. The vegetables still look kind of fresh, as if they were just pulled off the shelves.

Reinford says the farm hires a person who "comes and grinds it up into a slush or a slurry."

"It looks like a smoothie when he's all done," he says.

That smoothie gets dumped in the digester.

After that, microorganisms start breaking down the slurry of dung and food. Because the mixture includes nutrient-rich food, the bacteria generate much more energy than if they were only working on manure. One of the products of that decomposition is a gas.

"It's a lot like your stomach. So you put food in it, you chew it up. That's what we essentially do with our grinder and the food waste ... you chew it up, it goes into your stomach, it creates gas...and then you...pass it through," he says. 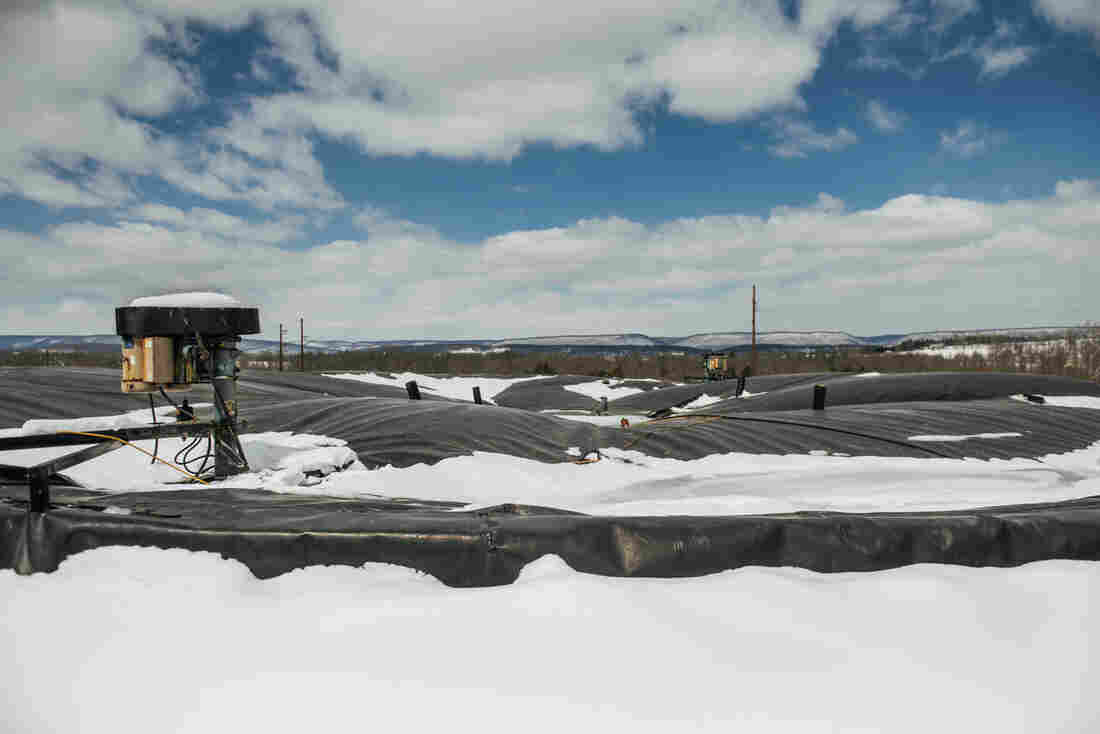 It's kind of like collecting a giant burp or fart, except the gas that passes out of the digester is about 60 percent methane. That's mostly what you're burning when you burn natural gas.

A pipe from the digester sends the methane to an engine that then converts the gas to power and heat.

"It heats our home, it heats our workshop, it heats all the hot water in our barn, and then, in the fall, we also use the heat that comes off of the radiator to dry all of our corn here on our farm. So we're not using any fossil fuels on this farm for the things that we need to heat," Reinford said.

The farm used to spend $2,500 a month to heat hot water in the house and barn.

Now the heating bill is zero.

How Colorado Is Turning Food Waste Into Electricity

The supermarket pays Reinford to deal with its food waste, plus the farm sells excess electricity back to the grid. That's at least three ways to make — or save - money.

Building the digester cost $1.1 million. But despite with that high price tag and the cost of maintenance, the farm not only saves $152,000 a year — Reinford is also making a profit.

"We used to look at manure as a nuisance, as, 'Oh, great. We have to deal with manure.' But now we see the valuable resource that manure is to our farm and also even to the community and to the environment," Reinford says.

Nine years ago, the farm got state and federal grants to cover 60 percent of the digester startup costs.

The incentives farmers can get vary from state to state. For example, Pennsylvania has cut back funding for digesters. But other states offer generous grants to encourage farmers to spend the money and do something good for the environment.

Other farmers also appreciate the environmental benefits and the opportunity to better manage waste, but they say, 'You have to make money.'

Lucas Waybright is manager and owner at Mason Dixon Farms in Gettysburg, Penn. That farm has had a digester for more than 30 years.

It's working well for Waybright. Still, he knows other farmers who received a grant to build a digester but aren't using theirs anymore. The cost of running the operation was more than the money the farmers earned from generating electricity.

Vermont has a program called Cow Power that supports farmers who decide to invest in a digester. Customers can choose to pay a little extra on their utility bill, and that money goes to farmers who've invested in poop to power systems.

A port in Oregon scaled up the digester idea across their community, but it did not work.

Port managers got 10 farms to truck in manure to one big digester, but they closed the operation down in August 2016.

General Manager Michele Bradley says they thought the income from selling power back to the grid would be enough, but "it became very clear right off the bat that you need multiple revenue sources to make a digester work out."

Unlike on Brett Reinford's farm, manure was the only ingredient going into that digester.

"The last thing we wanted to do was to shut it down, but we could no longer continue to bleed from the operation," Bradley says.

The port is now negotiating with a biogas company to see if it will take over the digester.

Only about 200 farms in the U.S. have a digester, but the Environmental Protection Agency estimates that more than 8,000 farms could have them.

David Babson, a technology manager at the U.S. Department of Energy, says we should think bigger. He'd like to see more digesters set up to process animal manure, human excrement and food waste.

"When you put the trash outside, you put it on the curb, you don't care where that goes, because to you, that's rubbish that is removed and put into a landfill somewhere," he says.

Babson says if Americans saw our trash as more than just rubbish, we wouldn't just bury it in a landfill.

Some places in the U.S. are already using digesters to capture the energy potential in food waste. There are community-wide operations in Oakland, San Jose, and 13 other places in California.

Alan Yu reports for WHYY's health and science show, The Pulse. This story originally appeared on an episode of its podcast called Power Struggle.