Accessibility links
A Watergate Villain Walks Into Berkeley Restaurant Chez Panisse. What Could Go Wrong? : The Salt A new film profiles influential chef Jeremiah Tower. When one of the most hated men in U.S. politics walked in for dinner at Berkeley's famed Chez Panisse, where Tower worked, a colorful scene ensued. 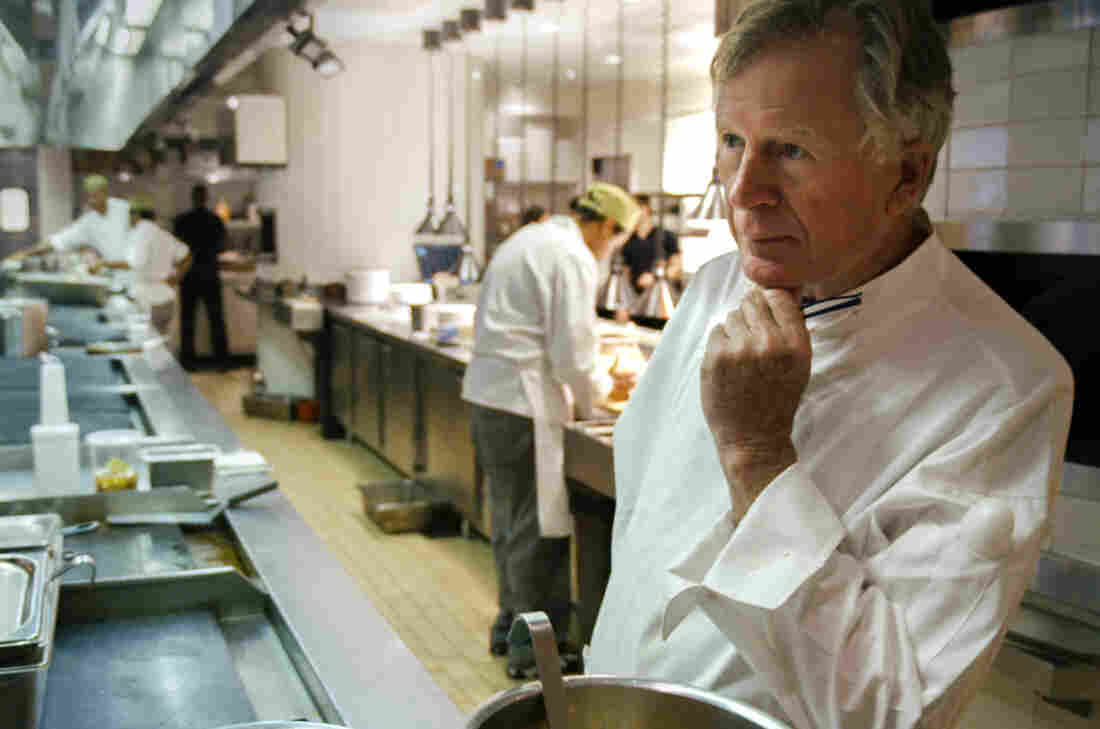 Jeremiah Tower is the subject of The Last Magnificent, a new documentary on his crash-and-burn career. It was produced by Anthony Bourdain, who feels that Tower has been denied his due in the American culinary pantheon. Courtesy of The Orchard hide caption

Editor's note: This post is about chefs and they can be quite coarse when they talk. Don't be surprised by a little foul language.

In these acrimonious times, many restaurants are treading the fine line between hospitality and politics. Anxiety-inducing though it might be, restaurants have found themselves in this awkward position before.

Just ask Jeremiah Tower, one of America's most influential chefs, who faced a similarly sticky situation four decades ago.

In 1974, when Tower was head chef at Alice Waters' Berkeley, Calif., restaurant, Chez Panisse, in walked H.R. Haldeman, Richard Nixon's former chief of staff and a key player in the Watergate cover-up. Today, Haldeman's name might not ring too many bells, but at the time, the man known as "Nixon's son of a bitch" was nationally notorious.

The Chez Panisse staff – very Berkeley and self-righteous – refused to serve him. 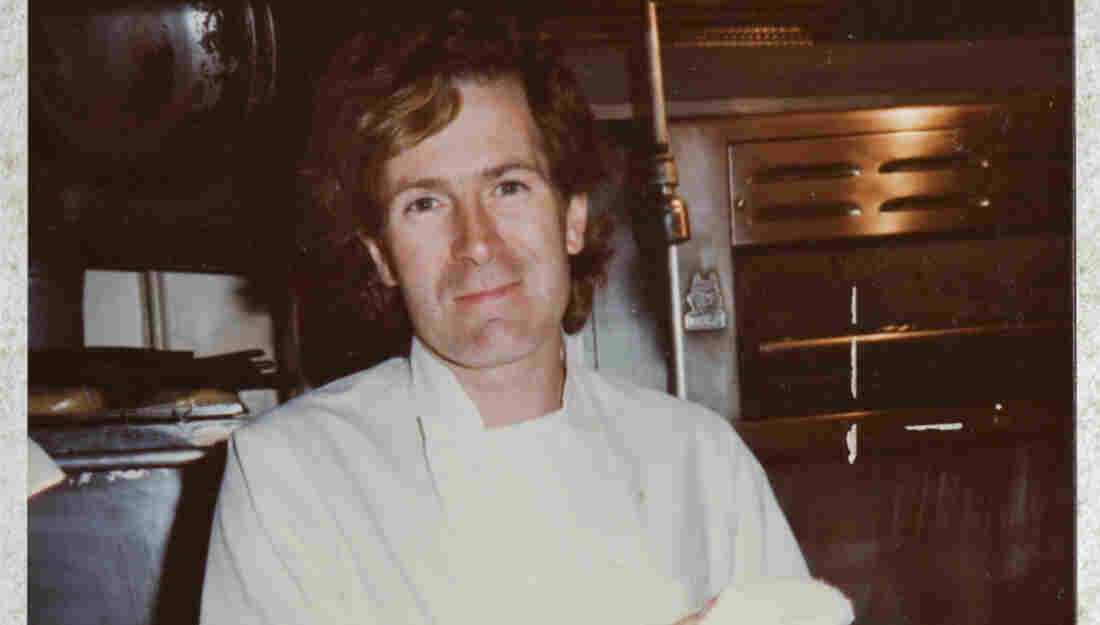 Jeremiah Tower in the kitchen at Chez Panisse, the landmark restaurant where, alongside Alice Waters, he helped shape modern American cuisine. When HR Haldeman, President Richard Nixon's former chief of staff and a key player in the Watergate cover-up, walked into the very Berkeley restaurant back in the '70s, a colorful scene ensued. Courtesy of The Orchard hide caption

It was a classic '70s moment. The country's sleaziest political scandal intersecting with a counterculture restaurant that would become the founding church of modern American cuisine.

In order to truly savor the Haldeman story, one must first conjure Tower's exuberant personality. His name probably rings fewer bells today than Haldeman's, but in his prime, first at Chez Panisse and then at his swanky San Francisco restaurant Stars, Tower reportedly rivaled Meryl Streep for column inches.

After ducking the spotlight for nearly two decades by hiding out in Mexico, Tower is currently basking in its amber glow. His elegant and acerbic 2003 memoir has been reissued as Start the Fire: How I Began a Food Revolution in America – the superb bibliography alone makes it worth the price, and arouses a deep admiration for this erudite if arrogant epicurean. But more significant is the launch of Jeremiah Tower: The Last Magnificent, a documentary on his crash-and-burn career. Produced by Anthony Bourdain, who feels that Tower has been denied his due in the American culinary pantheon, the film is well-intentioned but marred by an arch lyricism and interminable footage of Tower wandering among the Mayan ruins like an ageing hermit. Bourdain, ever ready with a vulgar bon mot, delights in calling the handsome and gay Tower "the first f***able American chef."

Tower was shaped by a wealthy and lonely childhood. He went to an English boarding school, where he learned about bad food and good manners, and later studied architecture at Harvard during the turbulent Vietnam era. Fleetingly moved to revolution, he filled a Dom Pérignon bottle with gasoline, stuffed it with an old Hermès scarf, carried it in a Tiffany bag to campus, and flung it ineptly against a wall. Posturing over, he fled back to his stove. Ever since he fixed himself a nasturtium sandwich as a solitary 5-year-old, he has spent his whole life as an apostle of good food. 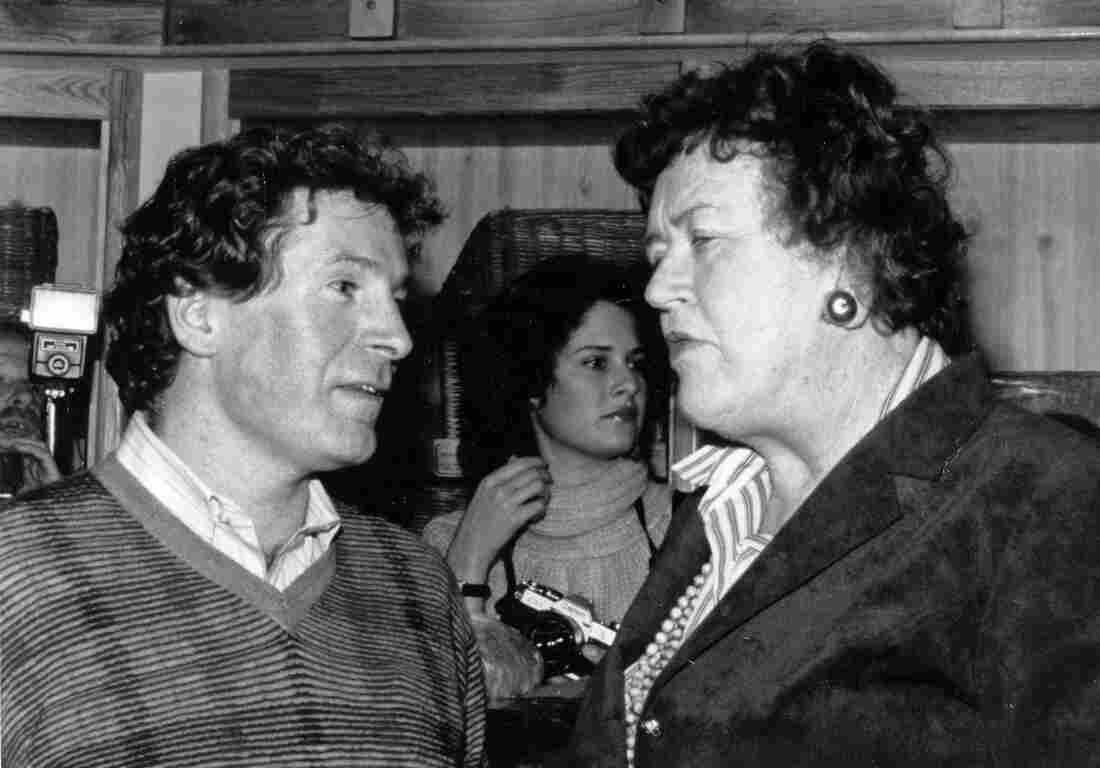 In 1973, Tower joined Chez Panisse as head chef. Fortified by heroic amounts of cocaine, champagne, oysters and the soaring operas of Verdi and Puccini, he, along with the "diminutive, bandannaed" Alice Waters, unleashed the California cuisine food revolution. It celebrated fresh, local ingredients classically prepared, with Tower providing the sensuous loft to Waters' mesclun asceticism.

One fateful summer evening in 1974, Watergate collided with Chez Panisse. 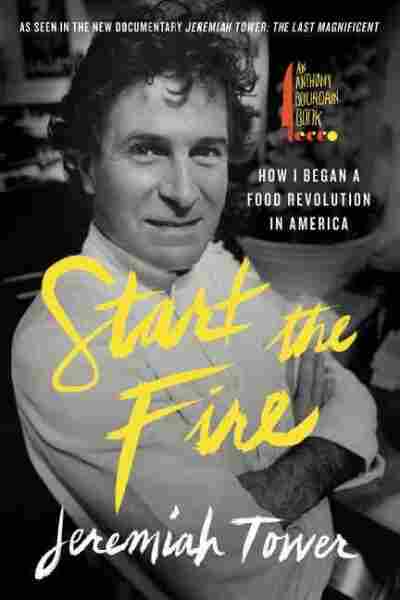 How I Began a Food Revolution in America

In the meantime, Tower, closeted in his tiny, opera-blasted kitchen, was unaware of "the waitstaff's powwows about the politically undesirable 'sh**head' in the dining room." Until a waiter came up and announced, "I am not serving that prick!"

"I recoiled in shock," writes Tower. "It would take something very rare indeed for a waiter to talk like that to a chef."

Haldeman was that "very rare" something. Socially, the tanned, cultured and patrician Californian was a perfect fit at Panisse. Politically, he was a pariah. But he had someone in his corner.

Tower turned on the waiter. "He's paying, isn't he? Take the food out now."

The waiter refused. As did the "mutinous staff" who had Waters' backing. The food was getting cold, but, writes Tower, "I was adamant that the man would be served and served well. As somewhat of an outcast myself, I sympathized. Throw Molotov cocktails as a political gesture I did, but intentionally serving bad food was not in my repertoire."

Fortunately, Jerry Budrick, whom Tower remembers warmly as "a steady presence," offered to take the dishes to the Haldeman table. Tower noticed the phone lines blinking – "most of the customers and half the staff were trying to call out — to reporters or for reinforcements, I was not sure." Regardless, he was getting on with his cooking when he heard his bearded beatnik sous chef snarl, "motherf***me." 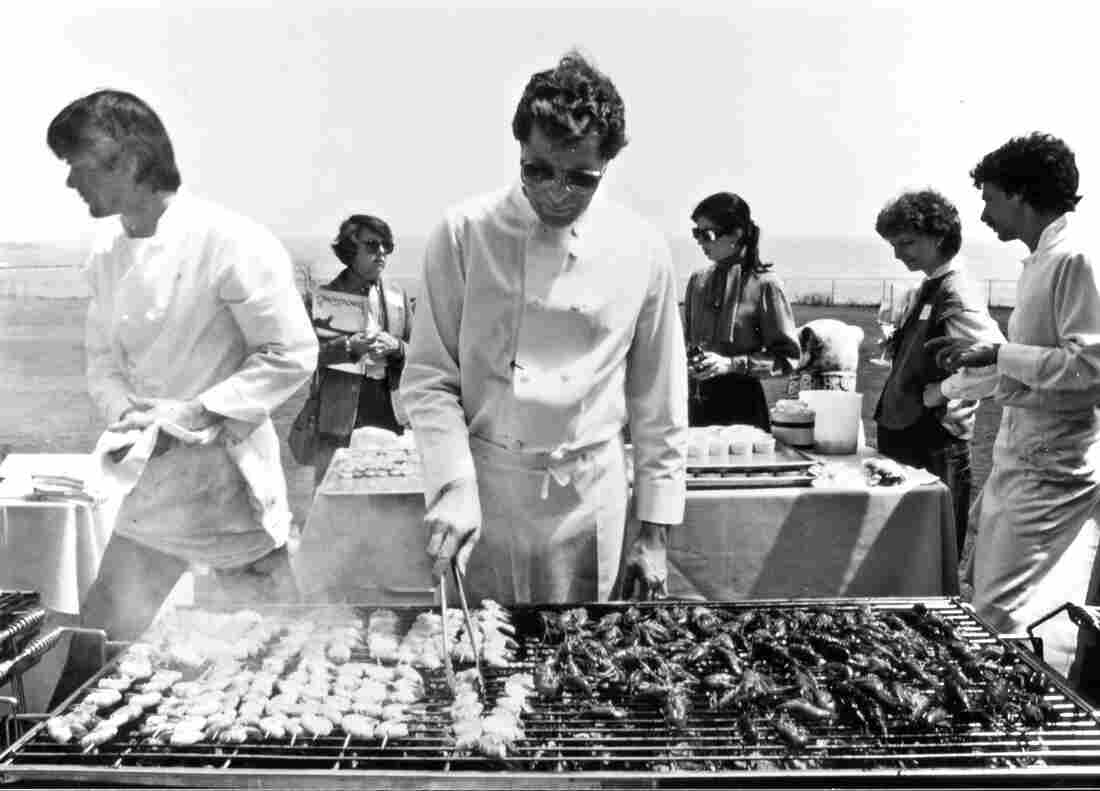 Jeremiah Tower grills lunch for 100 food journalists on the lawn of the Astor mansion in Newport Beach, R.I., in 1983. Tower wowed the East Coasters with his "new California" or new American cooking. Courtesy of Jeremiah Tower hide caption 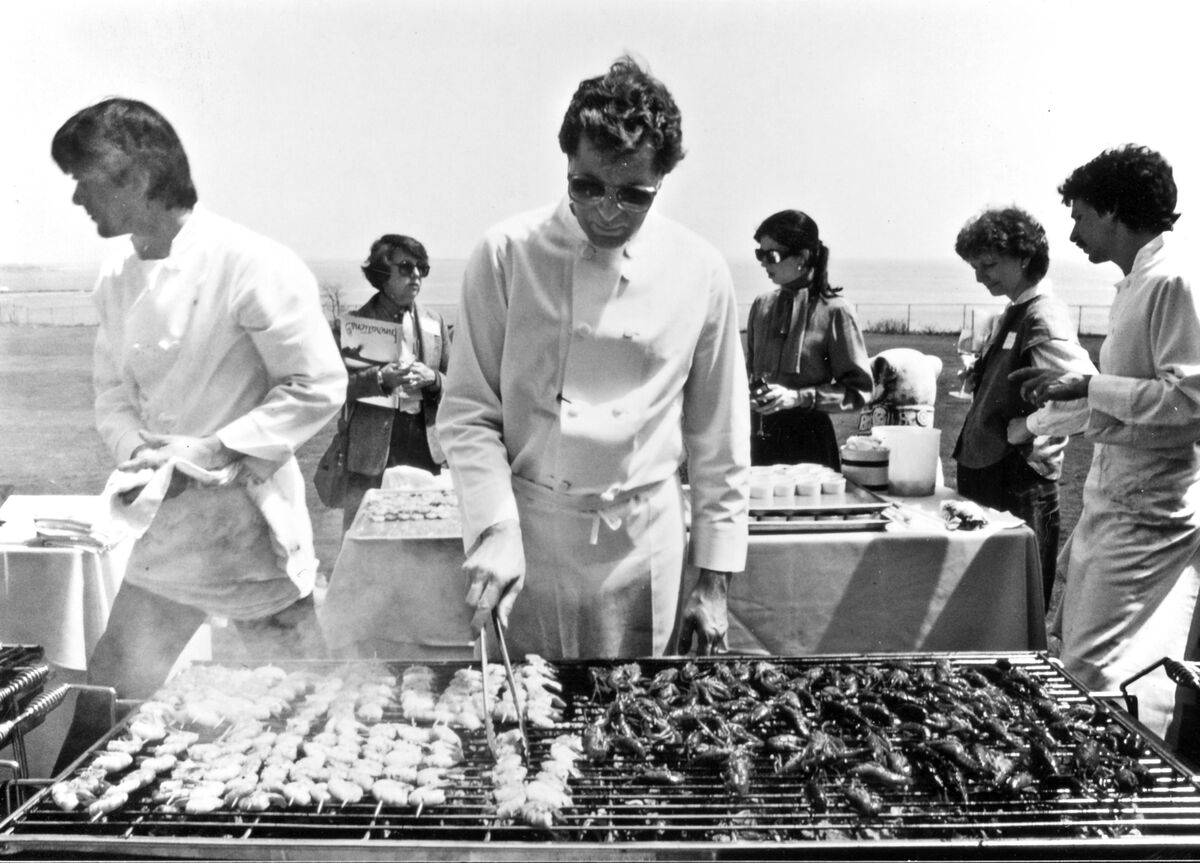 Jeremiah Tower grills lunch for 100 food journalists on the lawn of the Astor mansion in Newport Beach, R.I., in 1983. Tower wowed the East Coasters with his "new California" or new American cooking.

Tower turned around to see "Haldeman advancing on me with a smile and an outstretched hand."

He describes what transpired:

"The best thing about English public school training is that, when all else fails, your manners take over. Mine did. So I watched my hand as it rose slowly to clasp Haldeman's.

"Thank you," he said. And for not shaming him in front of his daughter. "Thank you for that."

"This is the perfect time to write about the Haldeman story," says Tower on the phone. "What chefs should know is, it's not about you. It's about the customer. You don't get to judge who can partake of that hospitality. If customers are being obnoxious you can ask them to leave. But not because of who they are or what their politics is. Everyone has the same right to live in this country. If they're just sitting there and enjoying their dinner, hallelujah."

If he had a restaurant today, would someone whose politics he disagreed with, say President Trump's chief strategist, Steve Bannon, be welcome? "Of course," says Tower. "I can't stand the idiot, but that's not the point. He probably can't stand me, either, probably thinks I'm a dangerous liberal. He can refuse to come to the restaurant. But once he's there, and being nice and normal, hallelujah."

The Haldeman dinner is part of Chez Panisse mythology. Competing versions abound, including the pernicious one that Haldeman was not charged because "this restaurant does not accept tainted money."

"Rubbish," says Budrick. "It was my job to wait his table, and I did. But then, Willy and Jeremiah, whom I love, but who is a royalist and loves the grand gesture, came up with the scheme that we wouldn't take his money. So, very politely I conveyed to Haldeman that the restaurant wasn't going to charge him. There was no talk of tainted money. We treated everyone politely. Edward Teller, the father of the hydrogen bomb, lived in Berkeley and was the object of local derision and hatred – but he came often to Chez Panisse and was welcome. That tainted-money story was written by Herb Caen" – a Pulitzer Prize-winner who wrote a much-loved gossip column for the San Francisco Chronicle.

"Somewhat blessedly," writes Tower about the fallout of the Haldeman visit, "Alice and the staff did not speak to me for a week."