Accessibility links
The Cocktail King Of Cuba: The Man Who Invented Hemingway's Favorite Daiquiri : The Salt Earning a spot on the author's list of most beloved drinks was no small feat. But bartender Constantino Ribalaigua, of Havana's now 200-year-old El Floridita, created a still-legendary cocktail. 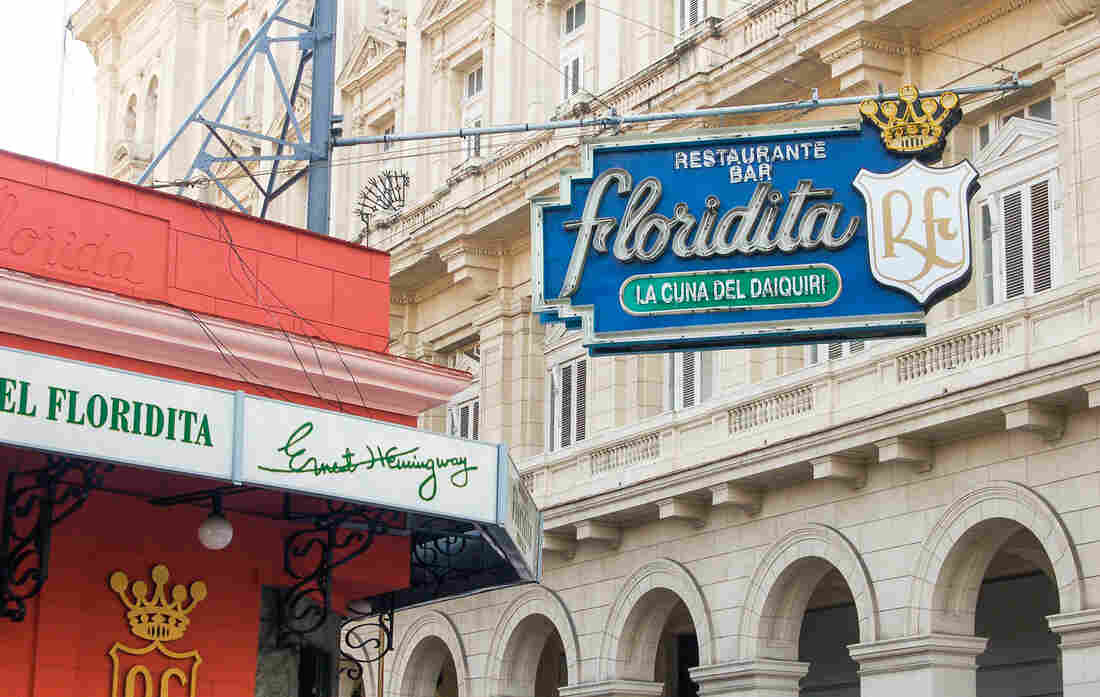 El Floridita in Havana may be 200 years old, but not a lot has changed. Amy Goodman/Flickr hide caption 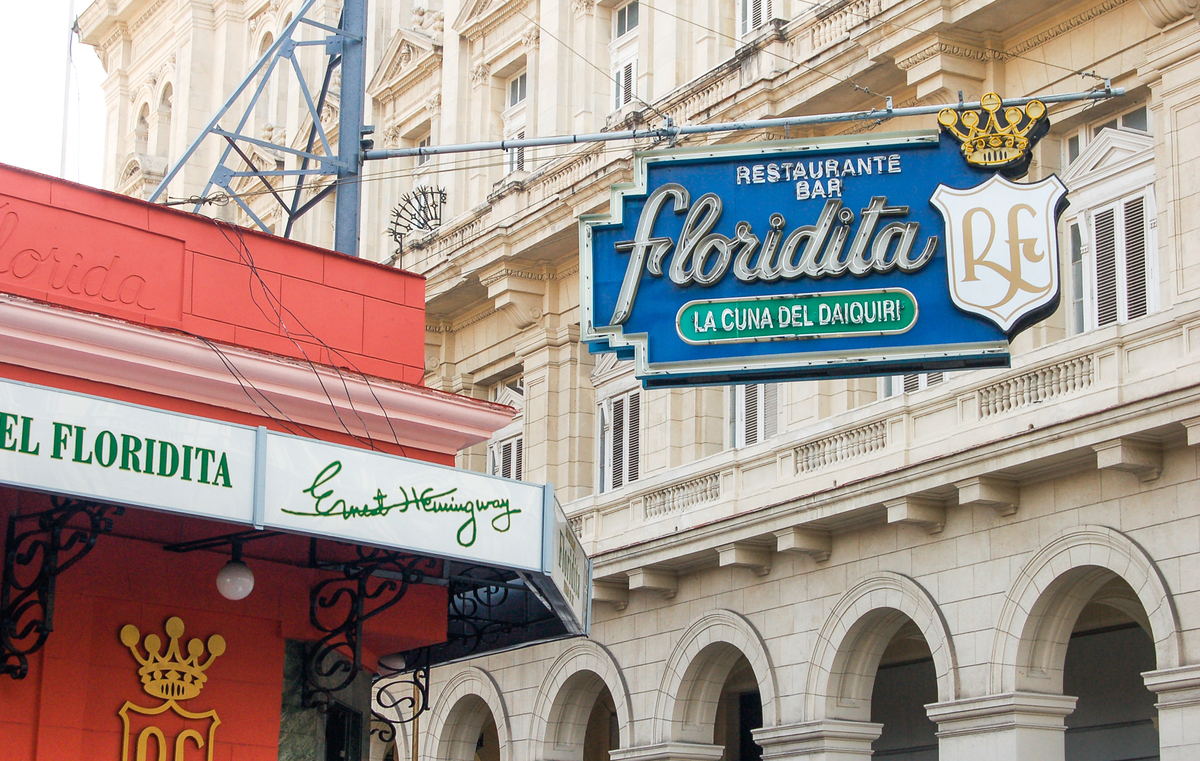 El Floridita in Havana may be 200 years old, but not a lot has changed.

Ernest Hemingway liked to get up early.

He did his best writing in the morning, standing in front of his typewriter, plucking the keys as fast as the words might come to him. This was fortunate, because by 11 a.m., the Havana heat began to creep into his rented room at the Hotel Ambos Mundos. He couldn't think in the swelter, much less write.

If the trade winds were good, Hemingway might make his way to Havana Harbor, where his boat, Pilar, was docked in the 1930s. But on other days, he would take the ornate caged elevator down from Room 511 to the lobby and make his way out to the sun-speckled street. It was just a 10-minute stroll through Old Havana from Hotel Ambos Mundos to El Floridita, Hemingway's favorite bar.

Between the heat and the morning spent cooped in his small room, Hemingway was always parched by the time he arrived at El Floridita.

The Golden Age Of Cocktails: When Americans Learned To Love Mixed Drinks

Luckily, bartender Constantino Ribalaigua Vert was always waiting in his white apron, shaker in hand and cocktail glasses lined up on the dark wood bar.

A good bartender knows the right way to greet a thirsty customer.

A great bartender knows that Ernest Hemingway was not your typical thirsty customer.

He had learned how to tend bar from his father. In 1914, the 26-year-old worked behind the mahogany counter at El Floridita, the American-style bar at the end of Obispo Street. By 1918, he had saved up enough cash to buy the place.

For the next three decades, Ribalaigua catered to tourists, artists, actors and expats, creating craft cocktails at a time when working with liquor was hardly considered an "art." Eventually, his craft would make El Floridita world famous. 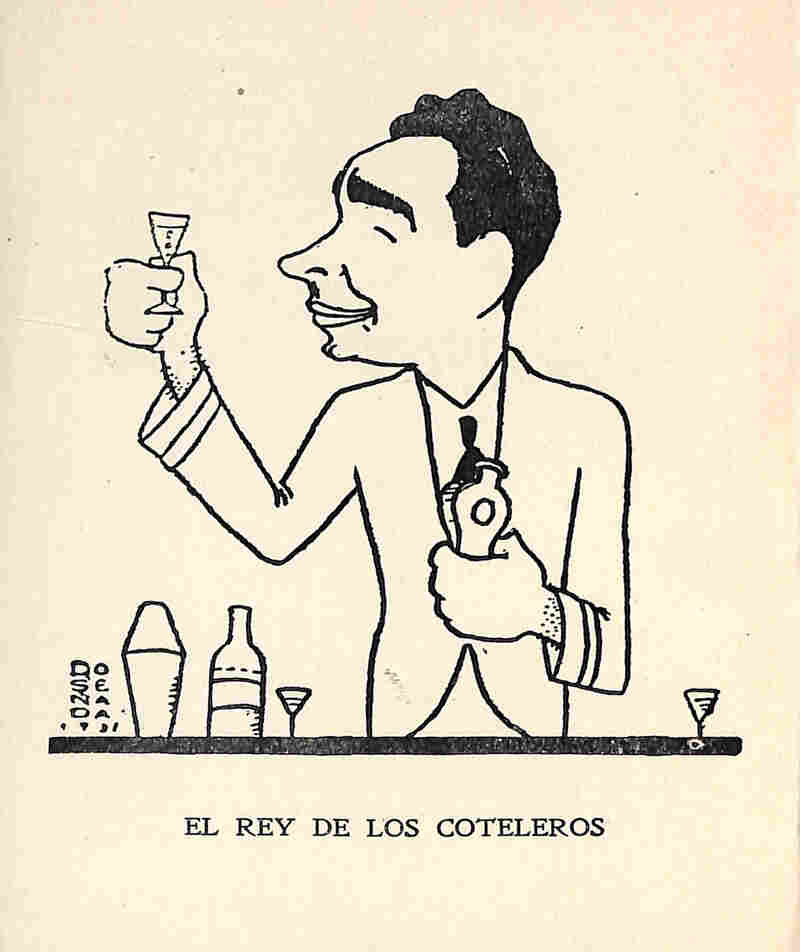 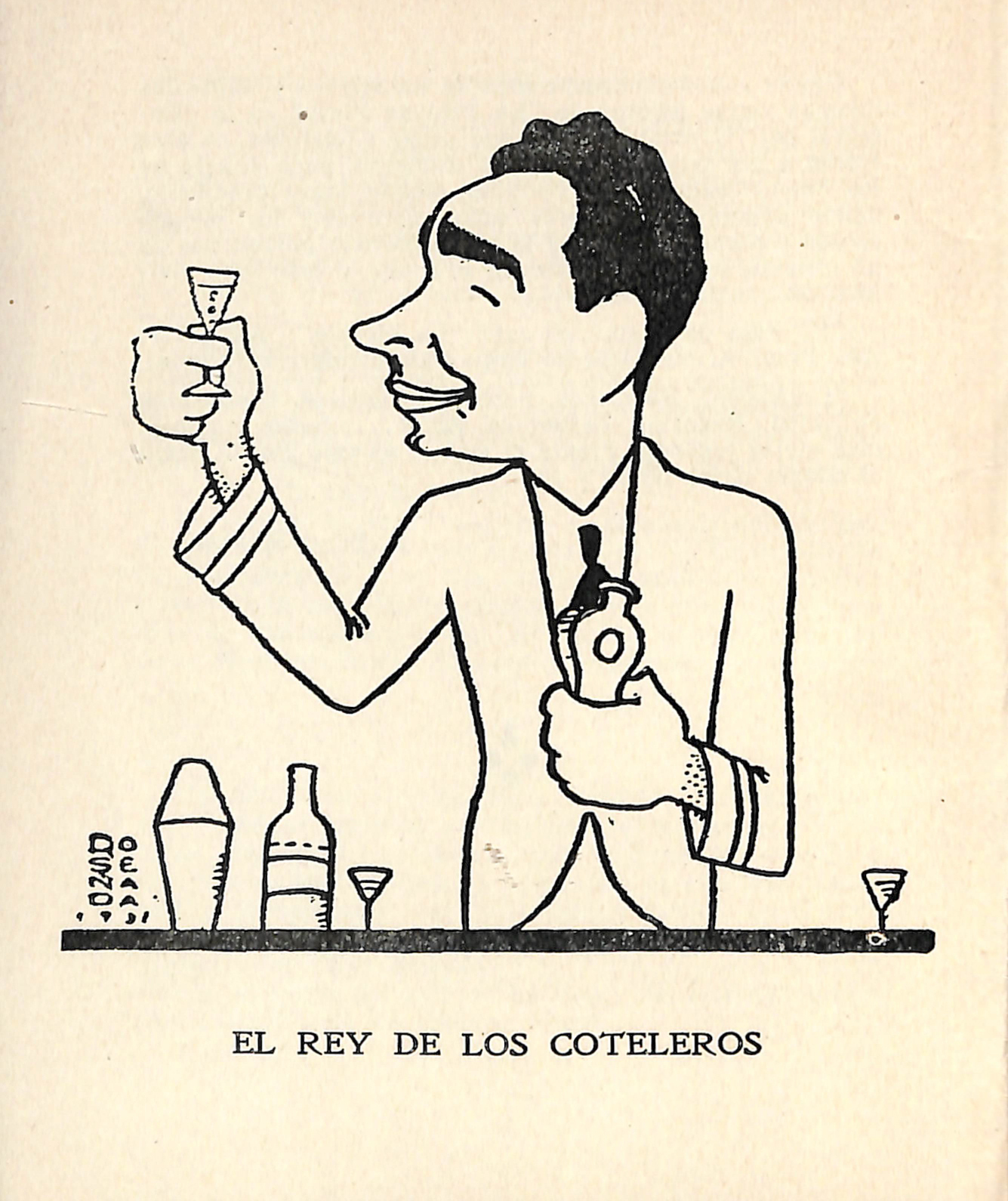 Illustration of Constantino Ribalaigua from a 1939 version of his book, Cocktails: La Bar Florida.

American sportswriter Jack Cuddy, holed up in Havana during the early 1930s to observe the New York Giants in spring training, once asked the man behind the bar at the Hotel Nacional to direct him to the best bartender in Cuba. "Constante," the man said, without hesitation. In the forward to Ribalaigua's 1935 recipe book, Bar La Florida Cocktails, Cuddy recalled what happened next: "We sent a committee of one to make a phone call to Sloppy Joes, the Plaza, the Sevilla and Prado 86. He returned and said the bartender was right. The vote was unanimously in favor of Constantino Ribalaigua."

Hemingway's introduction to Ribalaigua and El Floridita was more unintentional. In an interview with NPR, Hilary Hemingway, Ernest Hemingway's niece, explains: "In the early 1930s, Hemingway went into the Floridita to use the restroom one day. People in the bar were bragging about the daiquiris that were being served there. So he ordered one and took a sip. Ernest asked for another one, this time with 'less sugar and more rum.' And that's how the Papa Doble, or the Hemingway Daiquiri, was born."

Ribalaigua coined the drink after Hemingway — and the rest is literary-meets-libation history. The Papa was for Hemingway, known for his graying beard and fatherly self-assurance. The doble — well, that meant two. Two times more liquor to pack the most punch. Phillip Greene, author of the book To Have and Have Another: A Hemingway Cocktail Companion, says Hemingway proudly boasted to have downed 17 of Constante's daiquiris over the course of one afternoon in 1942. Seventeen dobles, that is. As Greene appropriately remarks in his book, "that's a hell of a lot of daiquiri."

The 1920s and '30s yielded a convoluted intersection between liquor and legality: The ascent of the cocktail in America was as much necessity as it was preference. During Prohibition, underground bars and speakeasies in America had limited access to quality booze — what they could get was strong, frequently homemade and often rough to taste. Backroom bartenders across the country had to be creative, adding fresh fruits or tasty garnishes to make the bathtub gin (and whiskey and rum) friendlier to the palate.

Those who could afford to escape the restraints of Prohibition traveled overseas to Paris, Spain and the Caribbean. Cuba, just 100 miles off the coast of Florida, was a near and welcomed respite for thirsty Americans. According to most estimates, American tourism to Cuba doubled from 1916 to 1926, from about 45,000 to 90,000 tourists a year.

Ribalaigua was a master of his trade at a time when there when there were no illusions about the cocktail's place in liquor lore. He invented more than 200 drinks and adapted dozens of others. His concoctions and recipes eventually made their way back to some of the finest bars in the U.S.

The daiquiri itself was not invented by Ribalaigua, but he did fine-tune it. He was the first to add chipped ice (a slightly more frappe-like version of today's frozen daiquiri), and he made four different versions at El Floridita. For the Papa Doble, he added grapefruit juice and a few drops of maraschino liqueur to two jiggers of light rum and the juice of a fresh lime.

British writer Basil Woon once wrote about the deftness with which Ribalaigua worked his magic behind the bar, explaining that he poured the ingredients freely, throwing the contents from shaker to shaker "with one motion," until Ribalaigua had filled the glasses "to the brim and not a drop is left over." 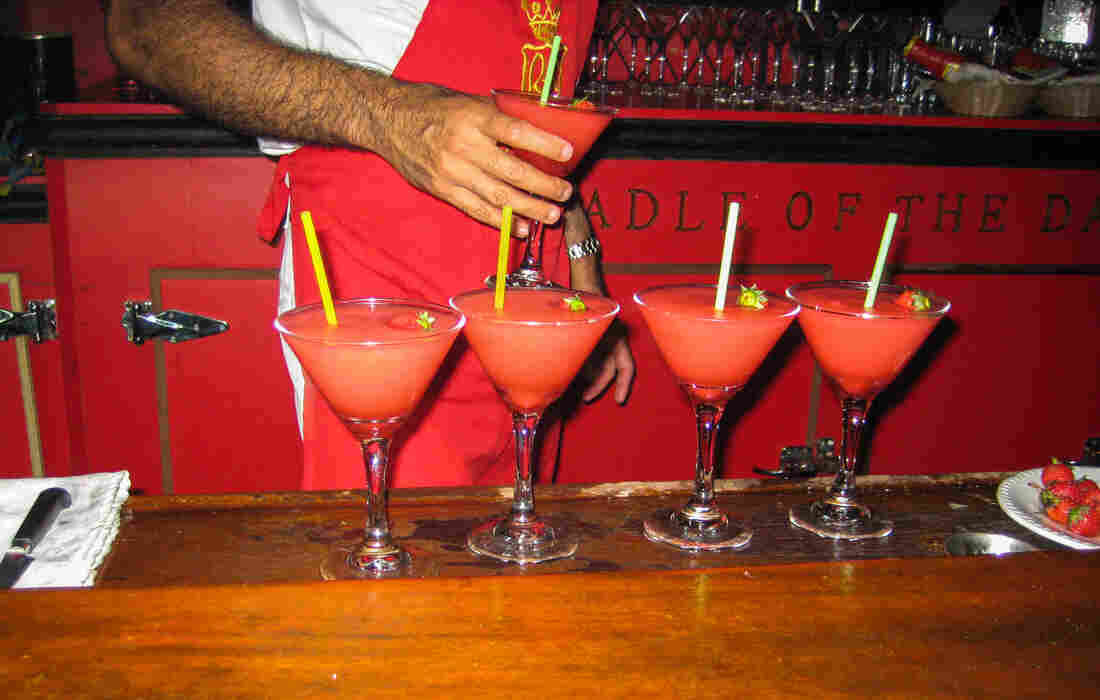 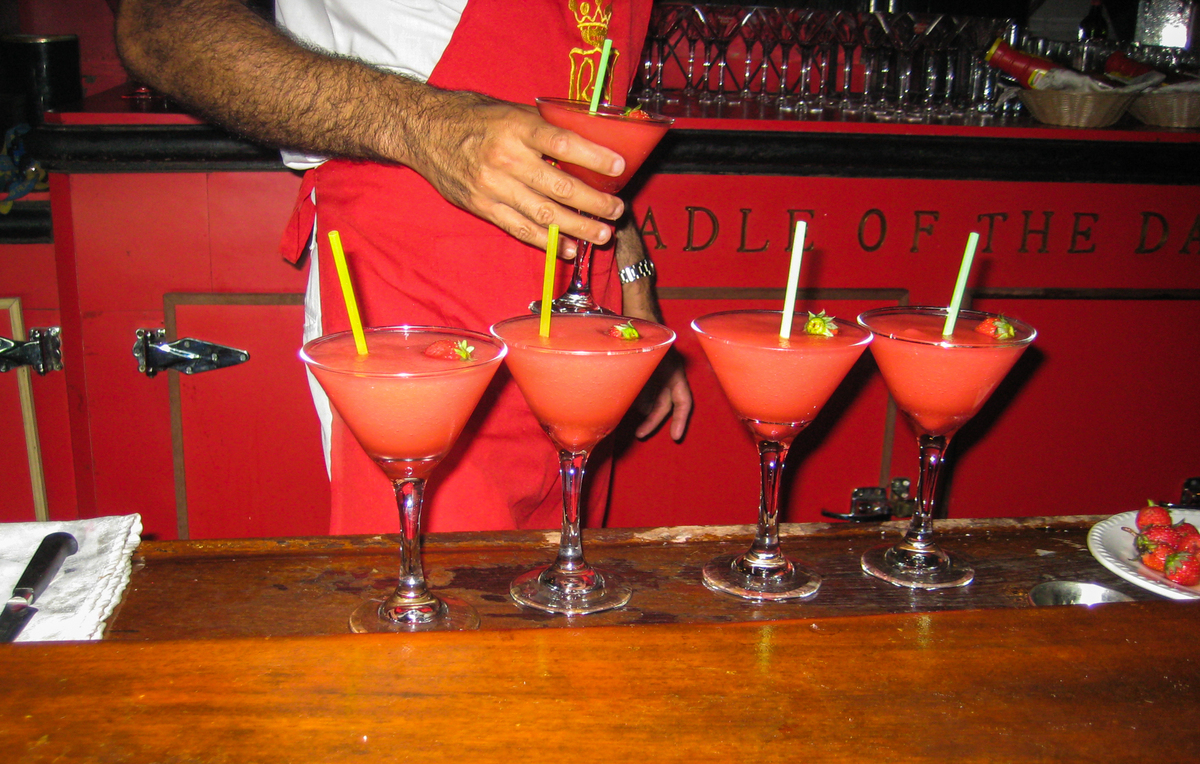 Strawberry daiquiris at El Floridita, where the Papa Doble, named for Ernest Hemingway, was born.

Cradle of the daiquiri

El Floridita soon became known as "la cuna del daiquiri," the cradle of the daiquiri — much because of the cocktail artistry of the hardworking Ribalaigua.

Even after Prohibition ended, Hemingway still swilled his daiquiris at El Floridita — and this, too, was because of Ribalaigua. In a letter dated June 5, 1943, Hemingway wrote to his third wife, Martha Gellhorn, "Everything is lovely here at the Nacional and the only thing lacking is you dear if you could only see the view from my room looking out over the beautiful gulf stream and Oh those daiquiris that nobody makes like old Constantino."

"He brought everyone who visited to see Constantino. They all would go to the Floridita to have drinks," says Hilary Hemingway. Ava Gardner and John Wayne dropped in for Constante-crafted cocktails. Over a bottle of Gordon's Gin at El Floridita, Spencer Tracy convinced Ernest Hemingway that Tracy should play the part of Santiago from The Old Man in the Sea. Hemingway once notoriously whispered to a fellow patron seated at the mahogany bar that there were FBI agents from the U.S. sitting just tables away, investigating his every move. 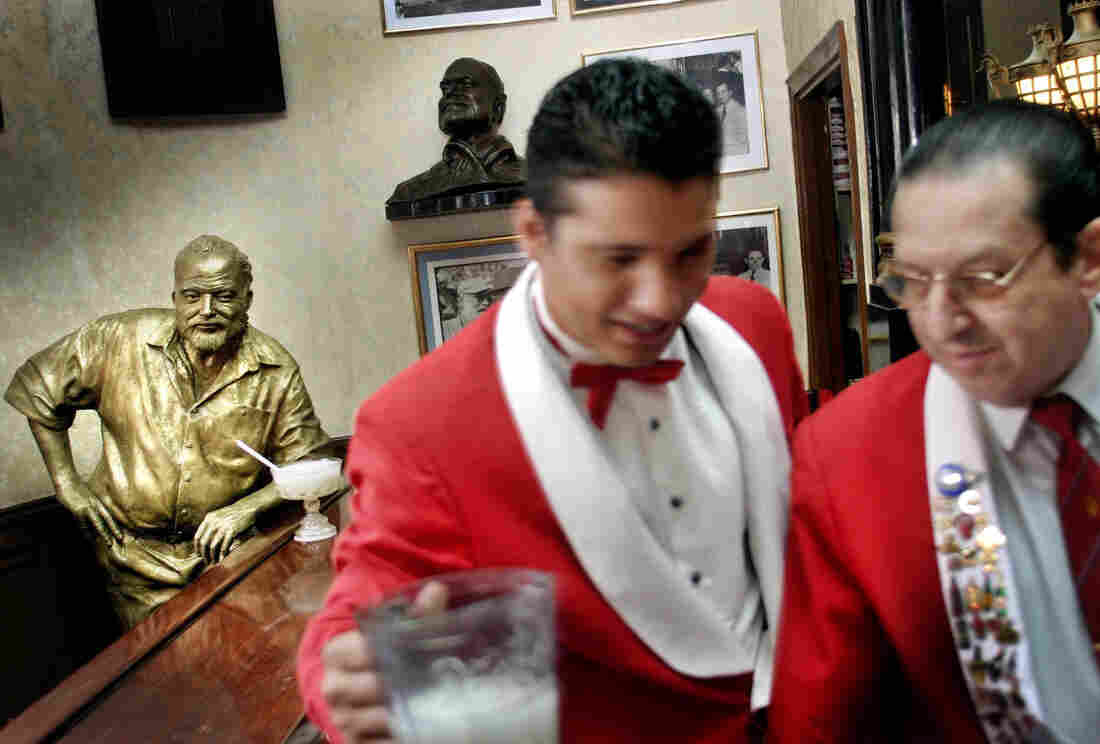 A life-size bronze statue of Ernest Hemingway leans on the bar at the author's regular spot at El Floridita, where every day a daiquiri is set before it. Sven Creutzmann/Mambo Photo/Getty Images hide caption 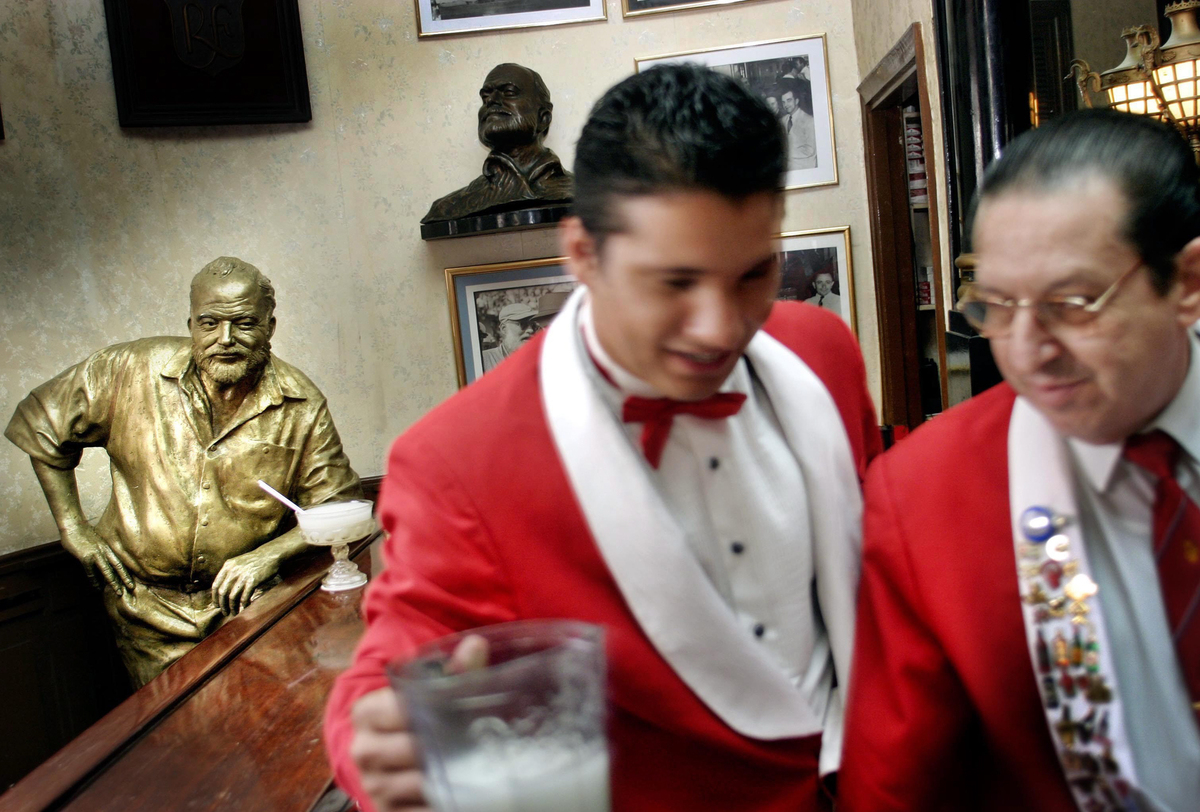 A life-size bronze statue of Ernest Hemingway leans on the bar at the author's regular spot at El Floridita, where every day a daiquiri is set before it.

The year 2017 marks the 200th anniversary of El Floridita, which opened in 1817. The bar is much the same as it was in Ribalaigua's time, a pink stucco building with a lighted sign out front. The heavy curtains are a splash of burgundy and the old wooden bar remains. At the end of the counter, there's a bronze statue of Ernest Hemingway. But behind the bar, the spirit of Ribalaigua, who died in 1952, looms forever in immortality — a hidden, ethereal figure with the cocktail shaker in his palm, ready to pour a hard drink with a cool hand, without spilling a single drop.

Nicole Jankowski is a freelance food, history and culture writer based in Detroit. You can find her on Facebook here.