Accessibility links
Tyson Foods Promises Better Conditions And Safety For Meat Workers : The Salt Meat-processing employs more than a half-million people. An investigation found they've got some of the most dangerous factory jobs in America and suffer from injury, low pay and lack of work breaks. 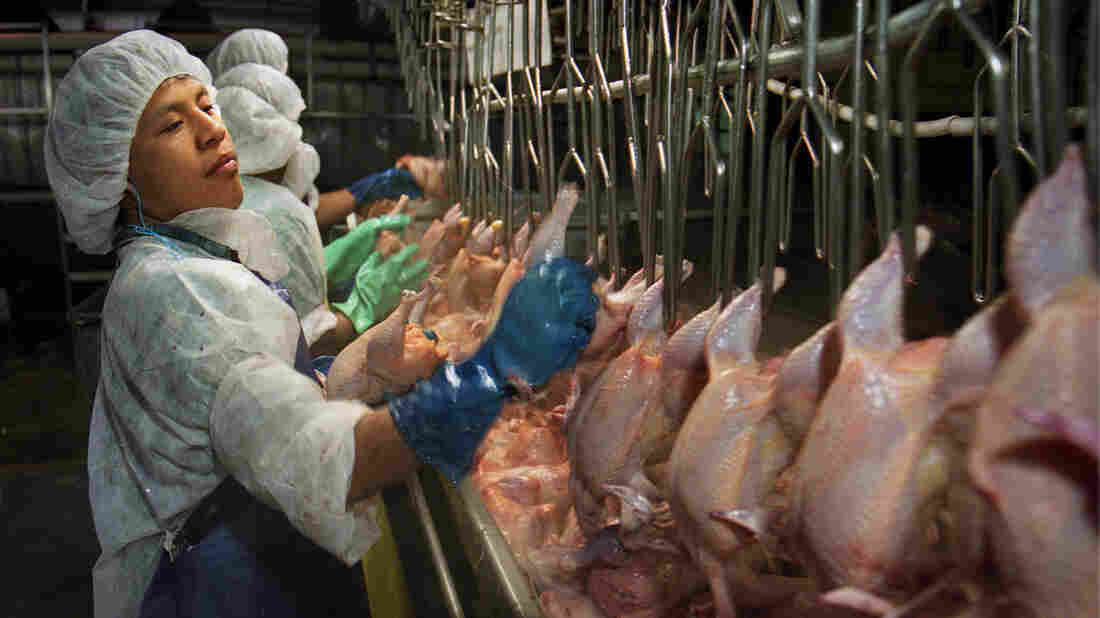 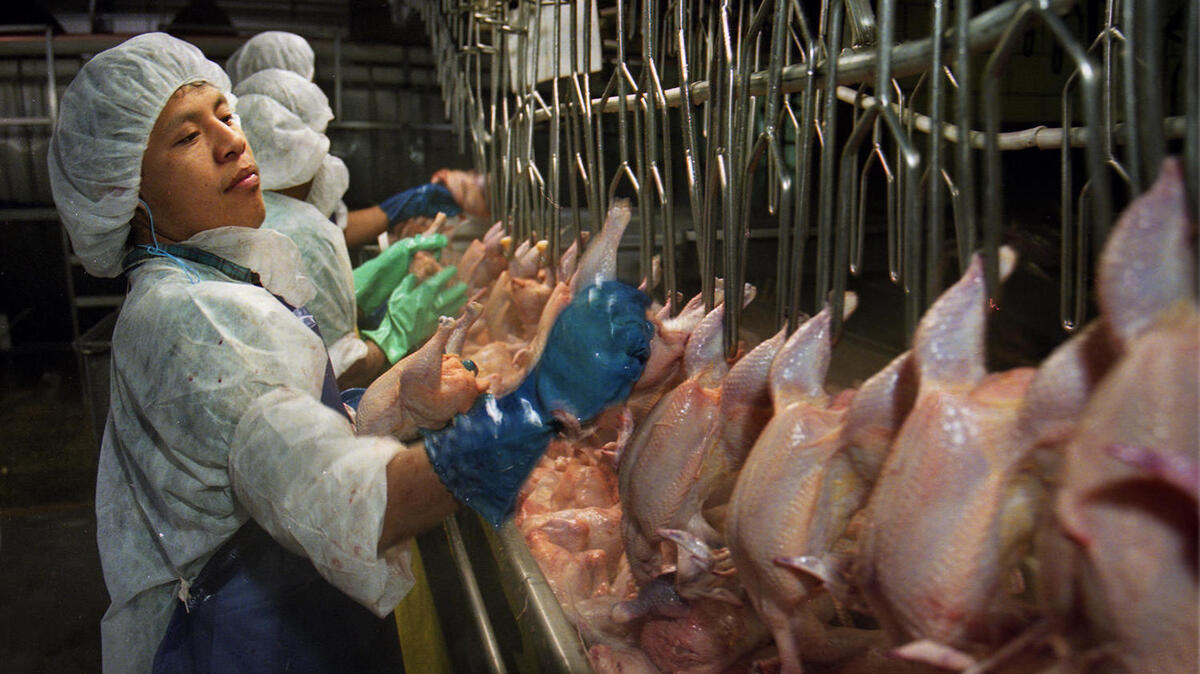 Poultry workers at major U.S. meat-processing plants are highly susceptible to repetitive-motion injuries, denied bathroom breaks and are most often immigrants and refugees.

Under pressure from worker advocates and growing consumer awareness, Tyson Foods on Wednesday promised better conditions for employees at its meat-processing plants.

Tyson, in a rare move for an industry heavily criticized for lack of worker safeguards, announced it would provide regularly scheduled bathroom breaks, give more attention to line speeds at plants, offer training on workers' rights and establish safety councils that include employees.

The initiatives are an expansion of a workplace safety pilot program launched in 2015 and social compliance audits begun in 2012, says Gary Mickelson, a Tyson spokesman. They are also part of new CEO Tom Hayes' deeper focus on sustainability, Mickelson says.

The announcement was made in conjunction with Oxfam America, an anti-poverty group that has long pushed for such concessions, and the United Food and Commercial Workers International Union, the primary union for 70,000 U.S. poultry workers.

A Harvest Public Media investigation found that the more than 500,000 men and women who work in slaughterhouses and meat-processing plants have some of the most dangerous factory jobs in America. Government fines for abuses are low and lines speeds are so fast that workers are often crippled for life with repetitive motion problems, the investigation found.

In a report issued last year called "No Relief," Oxfam charged that workers at the four largest U.S. poultry companies — Tyson Foods, Sanderson Farms, Perdue Farms and Pilgrim's Pride — are routinely denied bathroom breaks, forcing some to wear adult diapers to work and others to urinate on themselves in order to avoid retribution from supervisors.

Oxfam and other worker advocates want to use consumers as a lever to push companies to make changes. Without pressure from grocery-shoppers – much like buyers' growing concerns about animal welfare issues and antibiotic use – food companies have been slow to respond, says Oliver Gottfried, a senior campaign strategist for Oxfam America.

"Consumers are becoming more aware of that and we feel like once they learned what was happening to the hands that were feeding them, the hands that were processing the chicken, that they'd want to speak out about it," Gottfried says. "And they have."

Tyson, based in Springdale, Ark., employs 114,000 people, including roughly 95,000 in the company's U.S. chicken, beef, pork and prepared foods facilities.

Wednesday's announcement was among the first for incoming Chief Operating Officer Noel White, who was named to the spot in February following a shakeup of Tyson's leadership team.

"We've always been committed to supporting our employees and have sound workplace practices in place, but also want to do better," White said in a prepared announcement. "That's why we're taking steps that include expanding training, improving workplace safety and compensation, increasing transparency and helping workers with life skills."

Other initiatives announced Wednesday include hiking wages, publicly sharing results of a third-party audit on worker conditions, increasing benefits to include more vacation and holidays, and expanding existing safety programs.

Gottfried says Tyson is the first company to respond to Oxfam's call to action. Next up is Perdue, which Oxfam will visit this week to share customers' petitions calling for better working conditions.

The meatpacking industry has had a culture of secrecy and a lack of transparency in the past, Gottfried says, adding that the more consumers know about that, the more that culture will change.