Accessibility links
California Is On Its Way To Having An Avocado Crop Year-Round : The Salt Americans ate 2 billion pounds of avocados last year; many came from Mexico. That's because avocados grow year-round in Mexico's climate, but not California's. Researchers are working to change that. 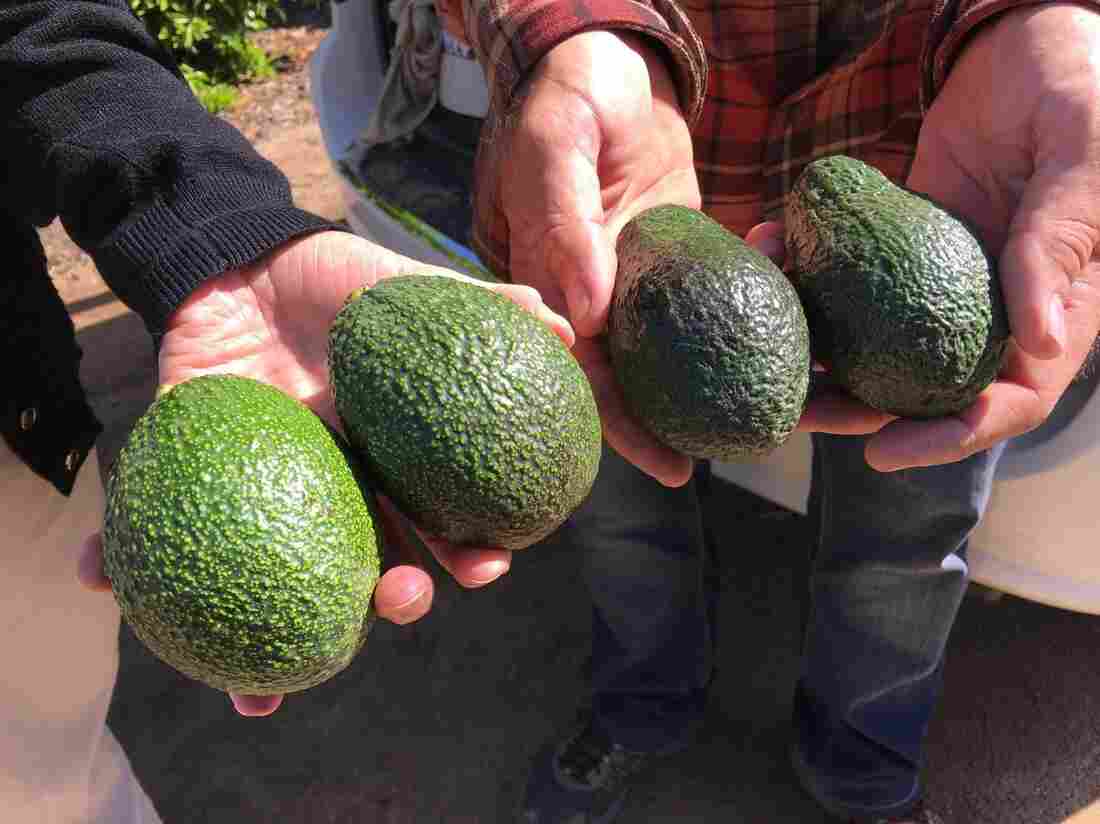 The avocados on the right are Hass, America's favorite variety of the green fruit. At left are GEM avocados, the great-granddaughter of the Hass. GEM avocados grow well in California's Central Valley and, in taste tests, they scored better than the Hass in terms of eating quality. Ezra David Romero/Valley Public Radio hide caption 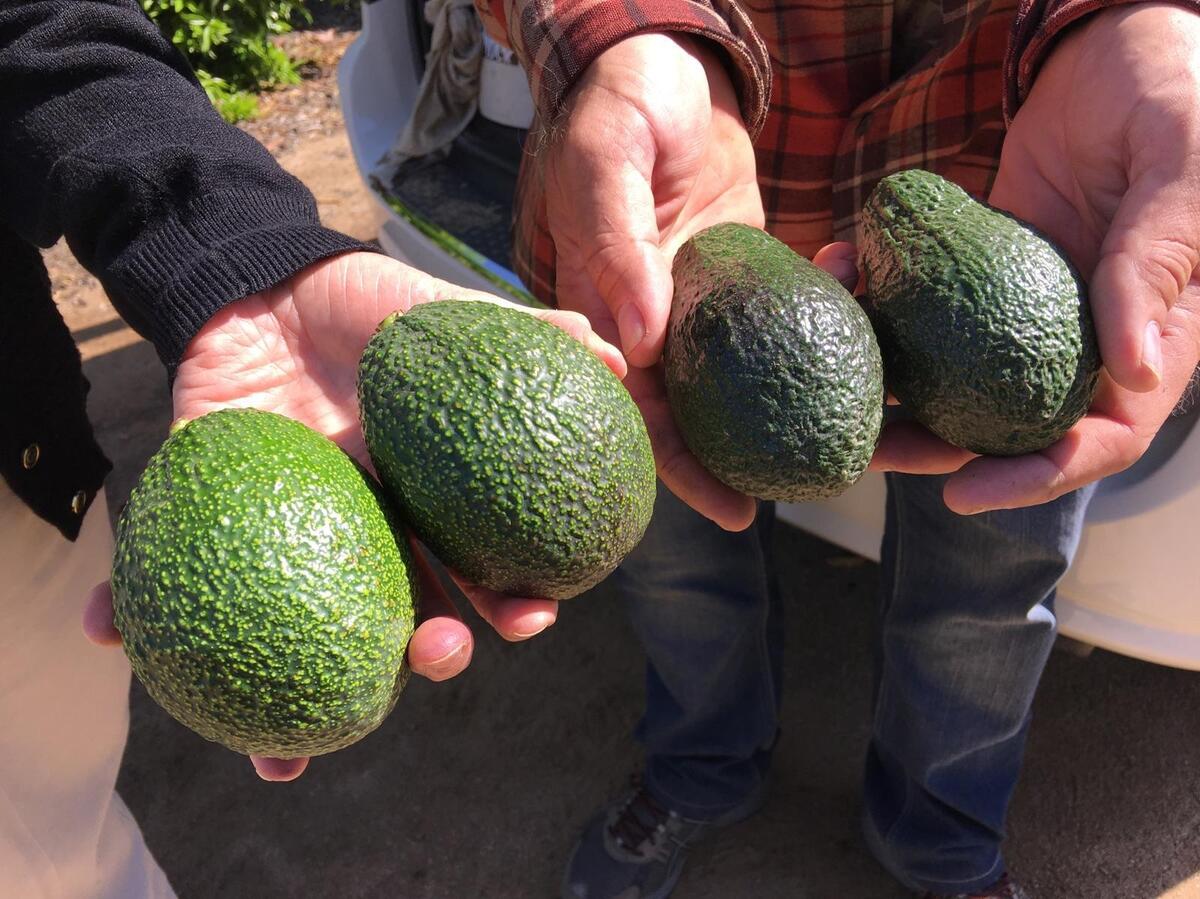 The avocados on the right are Hass, America's favorite variety of the green fruit. At left are GEM avocados, the great-granddaughter of the Hass. GEM avocados grow well in California's Central Valley and, in taste tests, they scored better than the Hass in terms of eating quality.

President Trump's tough talk on renegotiating the North American Free Trade Agreement with Mexico and Canada has raised many questions — including how such a move might negatively affect the flow of beloved produce to the U.S.

Like the avocado. Americans ate 2 billion pounds of avocados last year, two-thirds of which were imported – mostly from Mexico. That's because avocados grow year-round in Mexico's climate – but not in California's. But researchers in the Golden State — America's biggest producer of the green fruit — are working to change that.

Currently, most California avocados are grown in the southern part of the state and on a narrow strip along the coast. But if avocados could grow in the Central Valley, the state's agricultural powerhouse, farmers there could reap the benefits of our avocado addiction, as well as stand out among foreign imports.

Bite Back At Bad Cholesterol: Eat An Avocado A Day

For more than 20 years, researcher Mary Lu Arpaia has been on a mission to find an avocado tree that can withstand the Central Valley's frosty winters and hot summers. At a test field east of the Central Valley city of Visalia, Arpaia thinks she's found three varieties that can do just that.

"There's a void of California fruit on the market in the months of November, December and early January," Arpaia says. "So if we can find different selections that maybe are unique that fit into that window, then we help the entire California avocado industry."

Ninety-five percent of all the avocados Americans eat are Hass, a variety discovered in California in the 1920s. But the climate of the Central Valley does not allow Hass avocados to grow as well as they do in the milder climates of coastal and Southern California. Even in these locations, Hass only grow at certain times of the year — and not enough to compete with the large amount coming in from foreign markets. 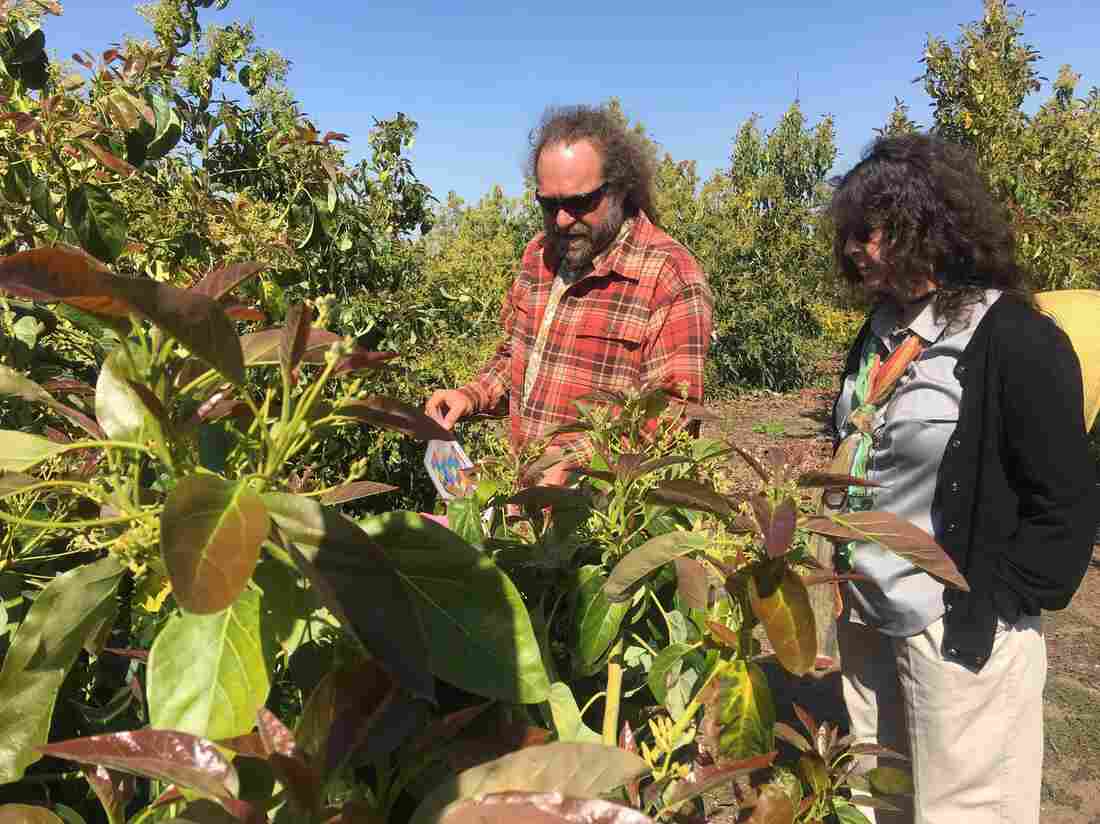 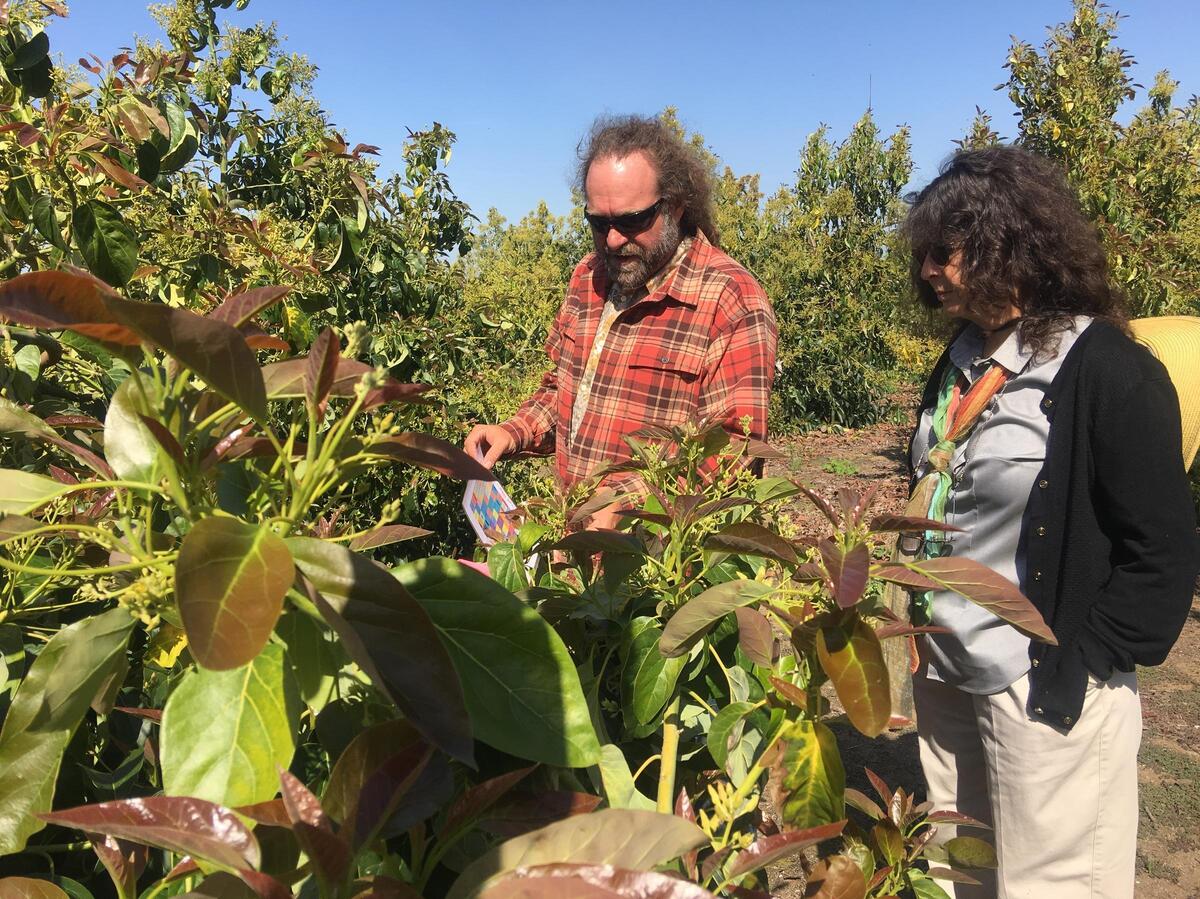 Eric Focht and Mary Lu Arpaia breed avocado trees across California. They're in search of varieties that will grow well in California's Central Valley.

The goal is to breed varieties that aren't super tall, can be planted close to each other and have a high yield. One type Arpaia and her colleague, Eric Focht, are recommending to growers has all these traits. It's called GEM, the great granddaughter of the Hass avocado, and is already sold at nurseries. Arpaia didn't breed it, but she and Focht recommended that the University of California system patent and release the variety.

Focht says that GEM avocados are "a little more oval or egg-shaped than Hass. It has the speckling on the skin. As it ripens, it will turn dark, and a lot of times the speckled lenticels [pores through which gases are exchanged] will get a ... golden color to it."

The second type is nicknamed "lunchbox" for its small size. The third has no name yet, but Arpaia and Focht think it holds promise.

"Lunchbox, that one peels nice, but I mean [the third, nameless variety] just falls out of the skin," Focht says.

Arpaia adds that the unnamed variety "makes wonderful guacamole, and I found with a non-replicated test in my refrigerator the fruit doesn't brown."

Arpaia say "lunchbox" and the nameless variety should be on the market within a year or two. That's good news for California avocado growers who want options.

"I want our avocado varieties to be in season for more than one week," Arpaia says, adding that she'd like different times of the year to be associated with certain varieties of avocados. "I want it where you can say it's July — it's time to pick this variety."

The avocado industry is also interested in Arpaia's research. Tim Spann, the research program director at the California Avocado Commission, says new varieties producing at different times of the year could widen the California avocado market.

"We have those premium supermarket chains that want California fruit," says Spann. "So if we can develop other varieties that will expand our season to a year-round or nearly year-round position, that would be fantastic."

The industry once funded the UC avocado research but pulled most of its funding a few years ago to focus on pests harming avocado trees. Now, Spann says the commission is thinking of reversing course.

"Within the last six months there's been a lot of talk about new varieties and how some of those varieties could help us expand our market," Spann says.

Jon Stearns is one of the few avocado farmers in the Central Valley. He grows 25 acres of mainly Hass avocados on a hill outside of Visalia and says the incline actually helps keep the trees warmer in winter. 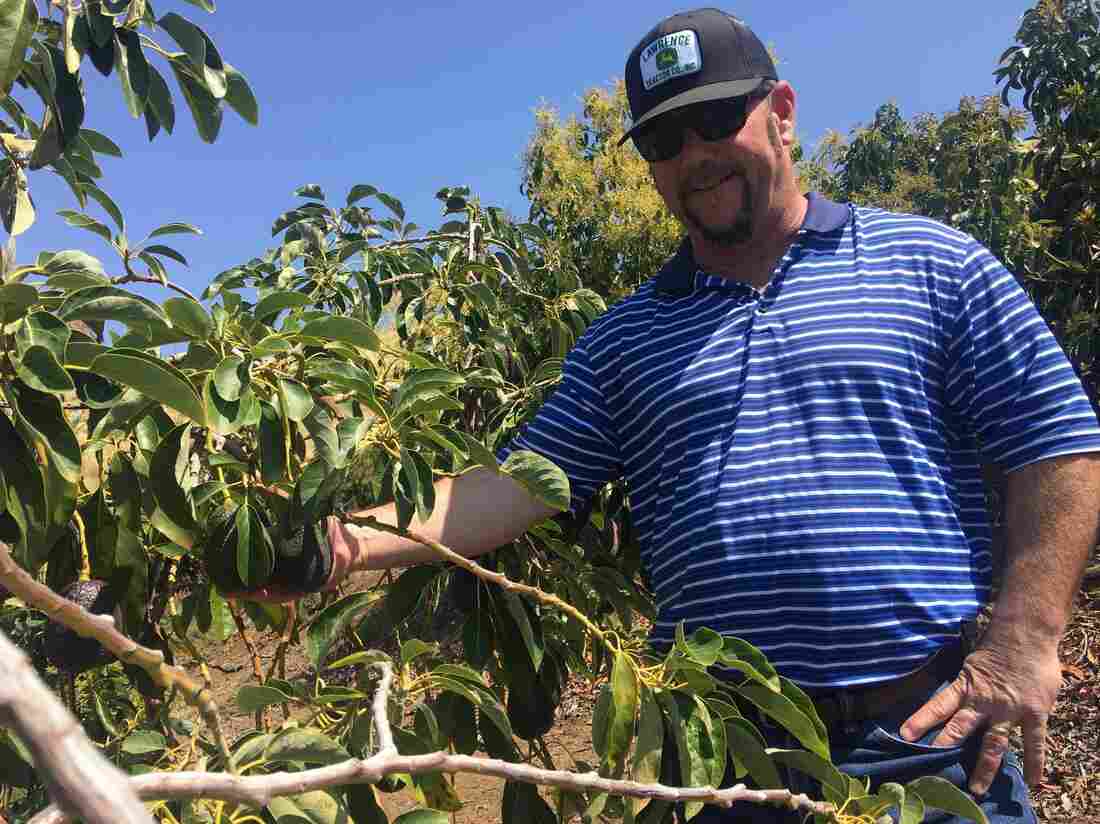 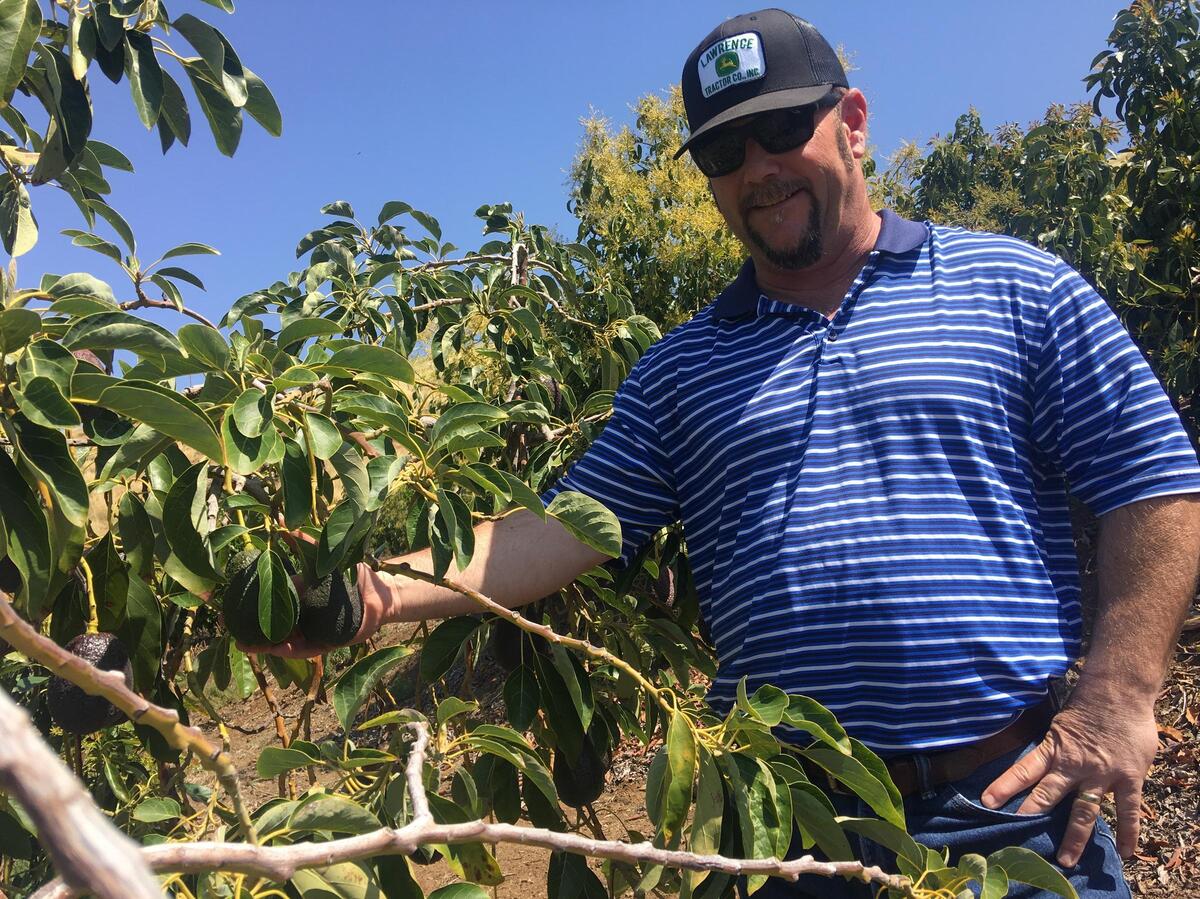 Jon Stearns says that as an avocado grower, he hopes new varieties come on the market.

"In the summertime we do some cooling techniques with our emitters and some foggers when it gets really hot — you know, over 105 degrees," Stearns says.

He says he'd love to get his hands on avocado varieties that grow well in the Central Valley. "If they could come up with a variety that's similar to the Hass that we could plant down at ground level instead of having it on the hills, I'm sure a lot of people would plant them," Stearns says.

And it's not just avocado farmers that are interested in the new varieties. Arpaia's avocado test plot is based at a UC citrus research center in part because she wants to see if avocados will grow well where citrus grows in California's Central Valley.

Valley citrus growers are considering alternative crops because of a looming threat to their business. A disease called Huanglongbing, which is carried by tiny bugs called psyllids, has already decimated the citrus industry in Florida and has made its way to Southern California.

Bob Blakely, of the trade organization California Citrus Mutual, says he hopes the disease does not make it to the Central Valley. "I hope that we're able to come up with resistant citrus varieties before we have to think about going to another crop. I'm just hopeful that the science is able to move quickly enough."

Blakely says if the disease does reach the Central Valley, citrus farmers will eventually need something else to grow. Maybe that could be avocados.

A version of this story first aired on Valley Public Radio, where Ezra David Romero is a reporter. He's on Twitter @ezraromero.