Accessibility links
'Paradise Lost': How The Apple Became The Forbidden Fruit : The Salt Some 350 years ago, Milton's epic chronicled the Fall of Man, wrought by the red fruit. Except that it might've been a fig or peach or pear. An ancient Roman made a pun – and the apple myth was born.

'Paradise Lost': How The Apple Became The Forbidden Fruit

'Paradise Lost': How The Apple Became The Forbidden Fruit 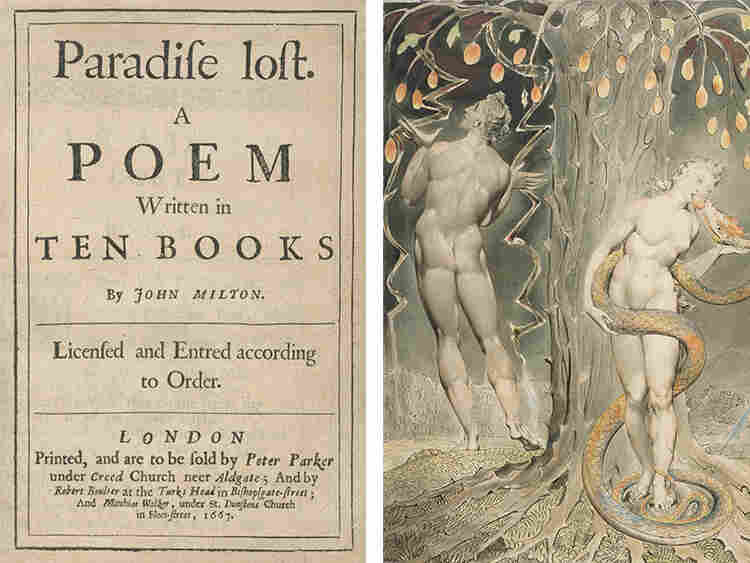 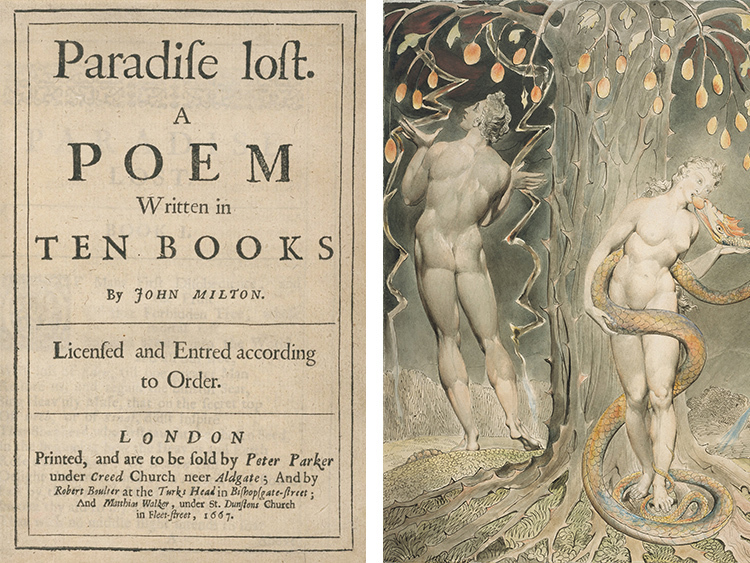 This month marks 350 years since John Milton sold his publisher the copyright of Paradise Lost for the sum of five pounds.

His great work dramatizes the oldest story in the Bible, whose principal characters we know only too well: God, Adam, Eve, Satan in the form of a talking snake — and an apple.

Except, of course, that Genesis never names the apple but simply refers to "the fruit." To quote from the King James Bible:

"Fruit" is also the word Milton employs in the poem's sonorous opening lines:

Of Mans First Disobedience, and the Fruit

Of that Forbidden Tree, whose mortal taste

Brought Death into the World, and all our woe

But in the course of his over-10,000-line poem, Milton names the fruit twice, explicitly calling it an apple. So how did the apple become the guilty fruit that brought death into this world and all our woe?

The short and unexpected answer is: a Latin pun.

In order to explain, we have to go all the way back to the fourth century A.D., when Pope Damasus ordered his leading scholar of scripture, Jerome, to translate the Hebrew Bible into Latin. Jerome's path-breaking, 15-year project, which resulted in the canonical Vulgate, used the Latin spoken by the common man. As it turned out, the Latin words for evil and apple are the same: malus.

In the Hebrew Bible, a generic term, peri, is used for the fruit hanging from the Tree of the Knowledge of Good and Evil, explains Robert Appelbaum, who discusses the biblical provenance of the apple in his book Aguecheek's Beef, Belch's Hiccup, and Other Gastronomic Interjections.

"Peri could be absolutely any fruit," he says. "Rabbinic commentators variously characterized it as a fig, a pomegranate, a grape, an apricot, a citron, or even wheat. Some commentators even thought of the forbidden fruit as a kind of wine, intoxicating to drink."

When Jerome was translating the "Tree of the Knowledge of Good and Evil," the word malus snaked in. A brilliant but controversial theologian, Jerome was known for his hot temper, but he obviously also had a rather cool sense of humor.

"Jerome had several options," says Appelbaum, a professor of English literature at Sweden's Uppsala University. "But he hit upon the idea of translating peri as malus, which in Latin has two very different meanings. As an adjective, malus means bad or evil. As a noun it seems to mean an apple, in our own sense of the word, coming from the very common tree now known officially as the Malus pumila. So Jerome came up with a very good pun."

The story doesn't end there. "To complicate things even more," says Appelbaum, "the word malus in Jerome's time, and for a long time after, could refer to any fleshy seed-bearing fruit. A pear was a kind of malus. So was the fig, the peach, and so forth."

Which explains why Michelangelo's Sistine Chapel fresco features a serpent coiled around a fig tree. But the apple began to dominate Fall artworks in Europe after the German artist Albrecht Dürer's famous 1504 engraving depicted the First Couple counterpoised beside an apple tree. It became a template for future artists such as Lucas Cranach the Elder, whose luminous Adam and Eve painting is hung with apples that glow like rubies. 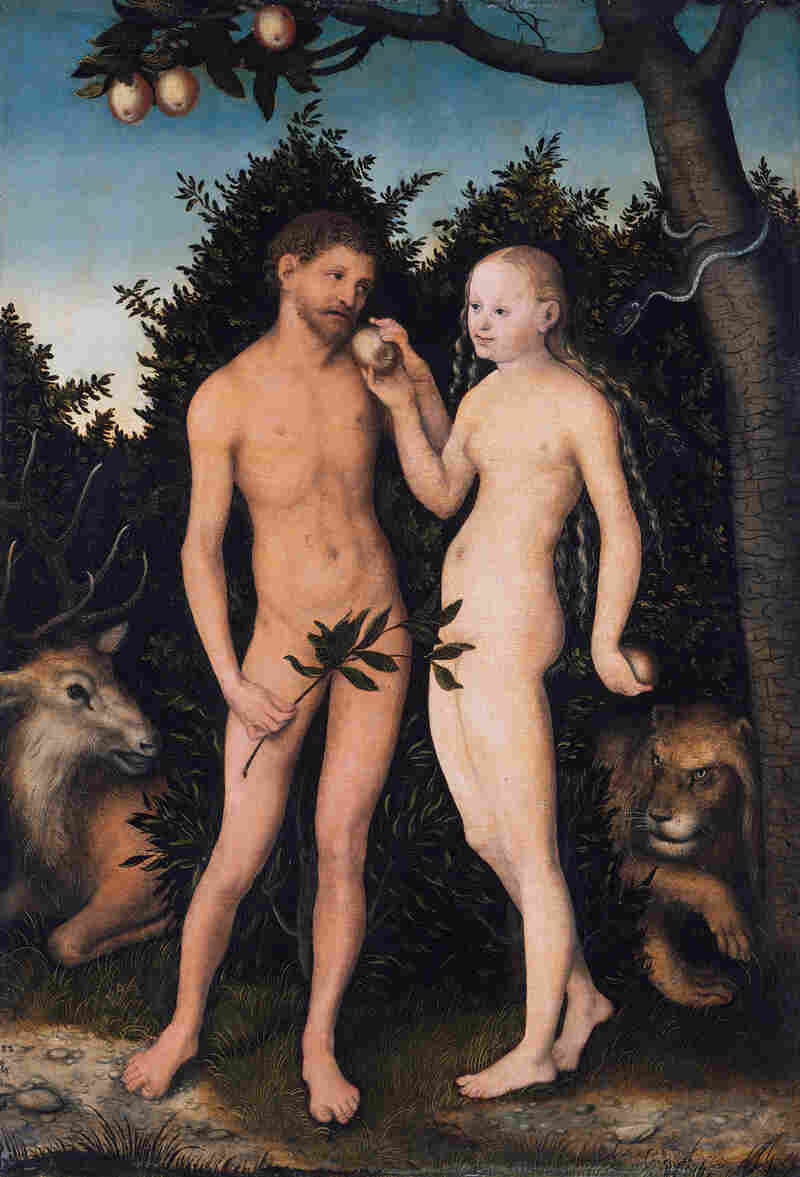 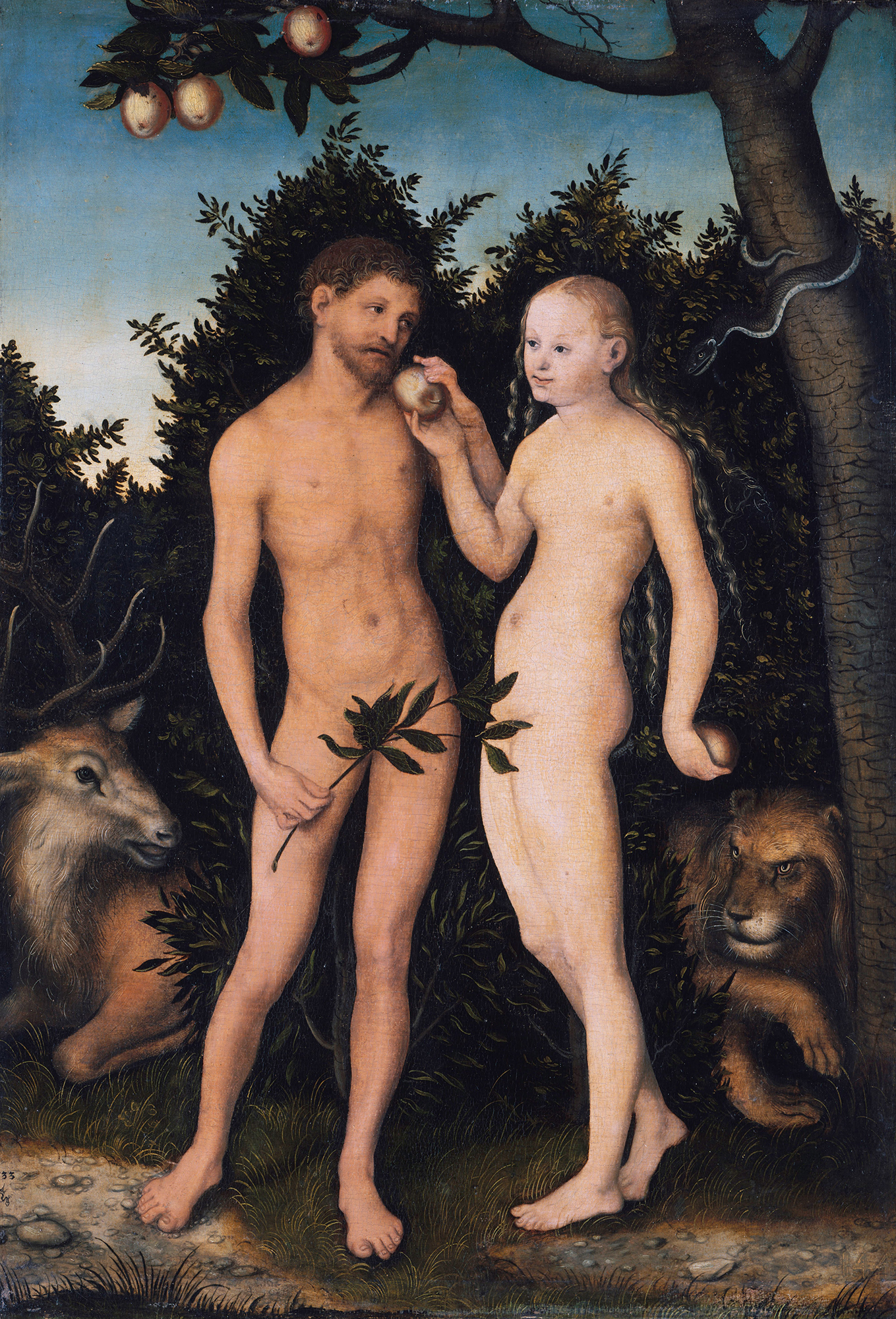 Milton, then, was only following cultural tradition. But he was a renowned Cambridge intellectual fluent in Latin, Greek and Hebrew, who served as secretary for foreign tongues to Oliver Cromwell during the Commonwealth. If anyone was aware of the malus pun, it would be him. And yet he chose to run it with it. Why?

Appelbaum says that Milton's use of the term "apple" was ambiguous. "Even in Milton's time the word had two meanings: either what was our common apple, or, again, any fleshy seed-bearing fruit. Milton probably had in mind an ambiguously named object with a variety of connotations as well as denotations, most but not all of them associating the idea of the apple with a kind of innocence, though also with a kind of intoxication, since hard apple cider was a common English drink."

It was only later readers of Milton, says Appelbaum, who thought of "apple" as "apple" and not any seed-bearing fruit. For them, the forbidden fruit became synonymous with the malus pumila. As a widely read canonical work, Paradise Lost was influential in cementing the role of apple in the Fall story.

But whether the forbidden fruit was an apple, fig, peach, pomegranate or something completely different, it is worth revisiting the temptation scene in Book 9 of Paradise Lost, both as an homage to Milton (who composed his masterpiece when he was blind, impoverished and in the doghouse for his regicidal politics) and simply to savor the sublime beauty of the language. Thomas Jefferson loved this poem. With its superfood dietary advice, celebration of the 'self-help is the best help' ideal, and presence of a snake-oil salesman, Paradise Lost is a quintessentially American story, although composed more than a century before the United States was founded.

What makes the temptation scene so absorbing and enjoyable is that, although written in archaic English, it is speckled with mundane details that make the reader stop in surprise.

Take, for instance, the serpent's impeccably timed gustatory seduction. It takes place not at any old time of the day but at lunchtime:

"Mean while the hour of Noon drew on, and wak'd/ An eager appetite."

What a canny and charmingly human detail. Milton builds on it by lingeringly conjuring the aroma of apples, knowing full well that an "ambrosial smell" can madden an empty stomach to action. The fruit's "savorie odour," rhapsodizes the snake, is more pleasing to the senses than the scent of the teats of an ewe or goat dropping with unsuckled milk at evening. Today's Food Network impresarios, with their overblown praise and frantic similes, couldn't dream up anything close to that peculiarly sensuous comparison.

It is easy to imagine the scene. Eve, curious, credulous and peckish, gazes longingly at the contraband "Ruddie and Gold" fruit while the unctuous snake-oil salesman murmurs his encouragement. Initially, she hangs back, suspicious of his "overpraising." But soon she begins to cave: How can a fruit so "Fair to the Eye, inviting to the Taste," be evil? Surely it is the opposite, its "sciental sap" must be the source of divine knowledge. The serpent must speak true.

So saying, her rash hand in evil hour

Forth reaching to the Fruit, she pluck'd, she eat:

Earth felt the wound, and Nature from her seat

Sighing through all her Works gave signs of woe,

That all was lost.

But Eve is insensible to the cosmic disappointment her lunch has caused. Sated and intoxicated as if with wine, she bows low before "O Sovran, vertuous, precious of all Trees," and hurries forth with "a bough of fairest fruit" to her beloved Adam, that he too might eat and aspire to godhead. Their shared meal, foreshadowed as it is by expulsion and doom, is a moving and poignant tableau of marital bliss.

Meanwhile, the serpent, its mission accomplished, slinks into the gloom. Satan heads eagerly toward a gathering of fellow devils, where he boasts that the Fall of Man has been wrought by something as ridiculous as "an apple."

Except that it was a fig or a peach or a pear. An ancient Roman punned – and the apple myth was born.

A previous version of this story misspelled the name of the author of Aguecheek's Beef, Belch's Hiccup, and Other Gastronomic Interjections. His name is Robert Appelbaum.