Accessibility links
Fresh Food By Prescription: This Health Care Firm Is Trimming Costs — And Waistlines : The Salt The rising prevalence and cost of Type 2 diabetes has doctors at Geisinger Health System turning to food as a form of medicine. They're prescribing free, fresh food to low-income patients. 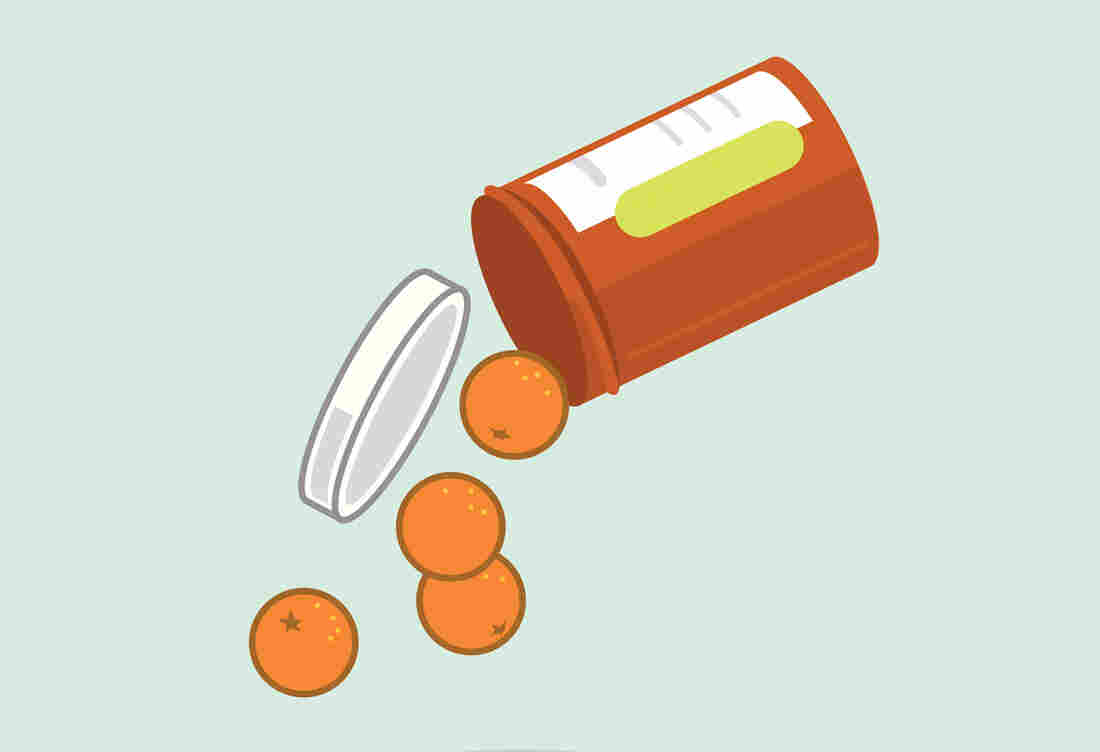 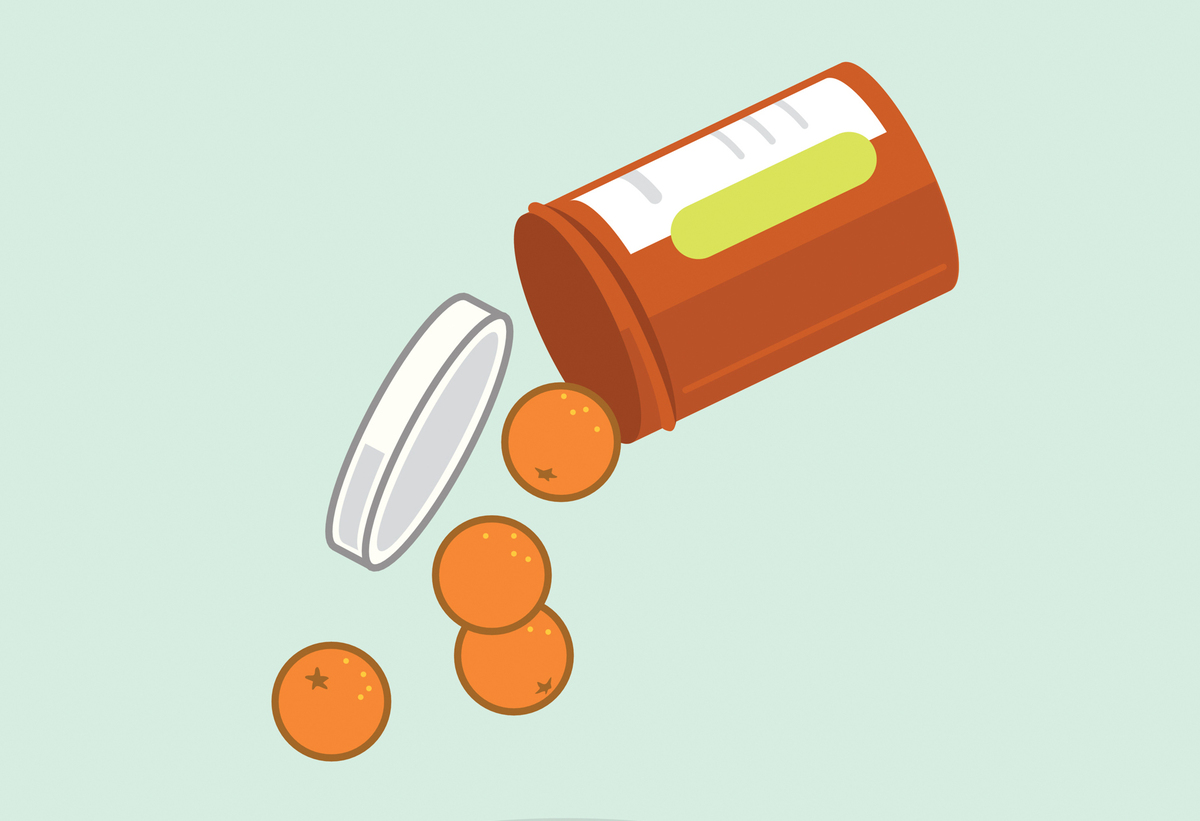 The advice to eat a healthy diet is not new. Back around 400 B.C., Hippocrates, the Greek doctor, had this missive: Let food be thy medicine.

But as a society, we've got a long way to go. About 1 out of every 2 deaths from heart disease, stroke and Type 2 diabetes in the U.S. is linked to a poor diet. That's about 1,000 deaths a day.

There are lots of places to lay the blame. Calories are cheap, and indulgent foods full of salt, sugar and fat are usually within our reach 24/7.

So, how best to turn this around? Consider Tom Shicowich's story. It begins with a toe. His left pinky toe.

"One day I looked down and it was a different color ... kind of blue," Shicowich says. And he began to feel sick. "I thought I was coming down with the flu."

The next day he was on the operating table. A surgeon amputated his toe, and it took two weeks of intravenous antibiotics to fend off the infection. 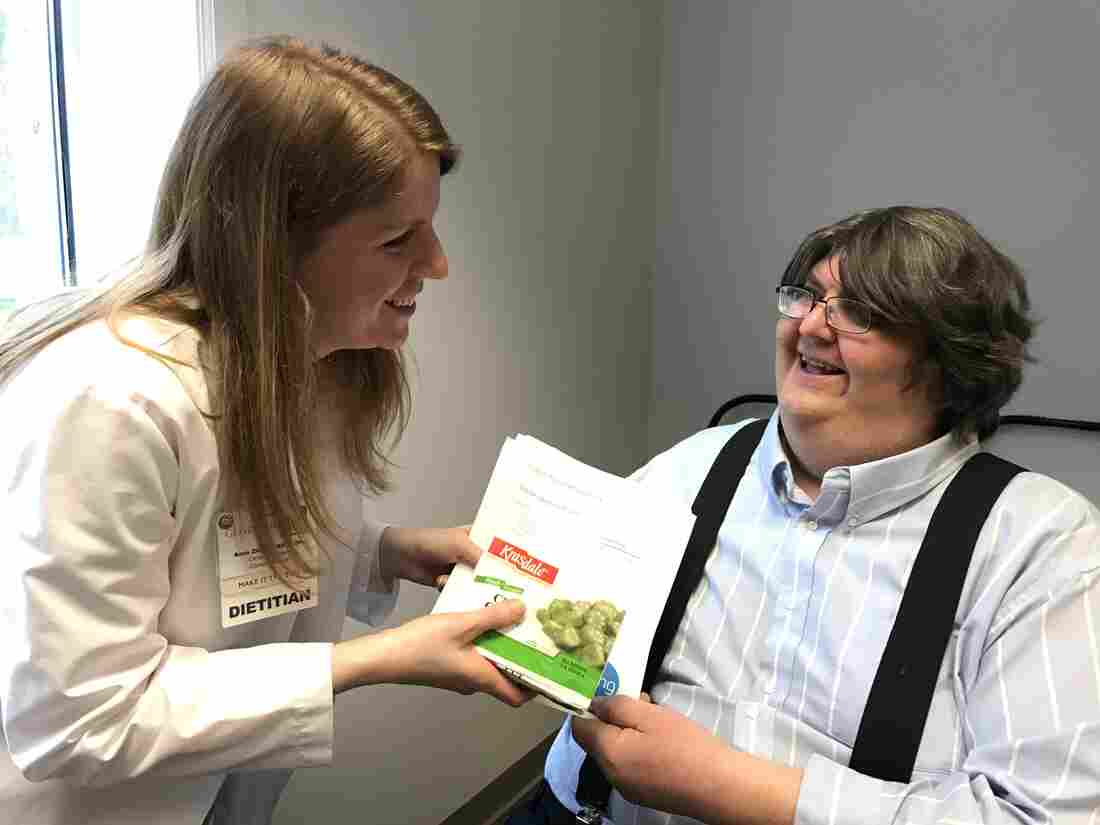 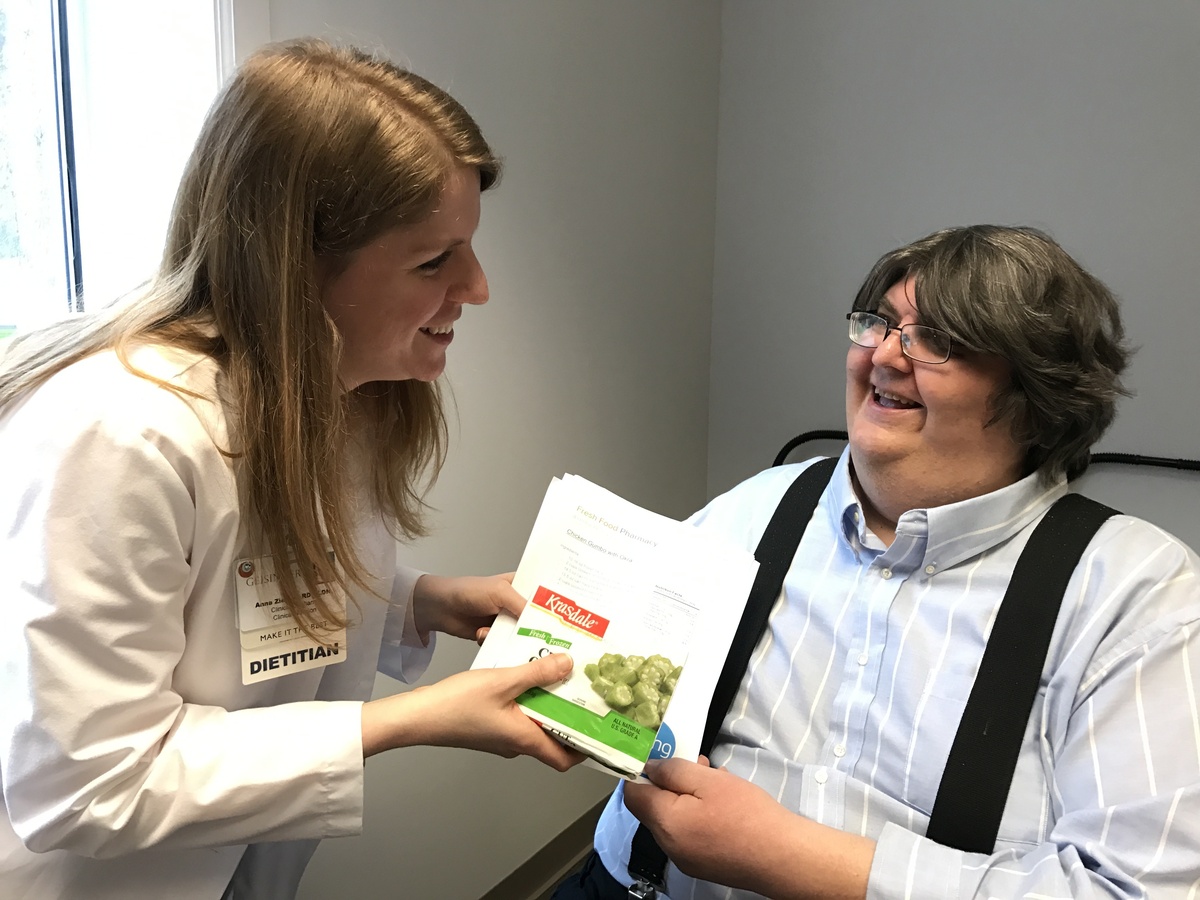 All told, he spent a month in the hospital and a rehab facility. "Oh, I tell you, it was a bad year," Shicowich recalls.

But this wasn't just bad luck. His toe emergency was somewhat predictable. Foot infections are a common complication of Type 2 diabetes — often due to nerve damage and poor blood flow, especially when the disease isn't well-controlled.

He racked up about $200,000 in medical charges from his toe emergency. The portion he had to pay out of pocket drained his savings account. "I did shell out $23,000 to the hospital, so that was a kick in the head," Shicowich tells us.

It was also a wake-up call.

Shicowich was more than 100 pounds overweight. He was was fighting nerve damage, high blood pressure and kidney problems — all complications of diabetes.

"So I knew it was time for a change," he told me. And last year, he found the help — and the motivation — he was looking for: a new food pharmacy program that has helped him overhaul how he eats.

Welcome to the food pharmacy

"Folks, good morning, and welcome to the ribbon-cutting and opening of the Fresh Food Pharmacy," intoned Sam Balukoff, the master of ceremonies at Geisinger Health System's recent debut of a new food pharmacy located on the grounds of a hospital in central Pennsylvania.

At this event, Shicowich was one of the stars of the show. Over the past year, he and about 180 patients with Type 2 diabetes have been participating in a pilot program aimed at getting them to change their diets and lose weight. They receive free groceries of healthy foods every week.

Shicowich has lost about 45 pounds, and he is now much more active. 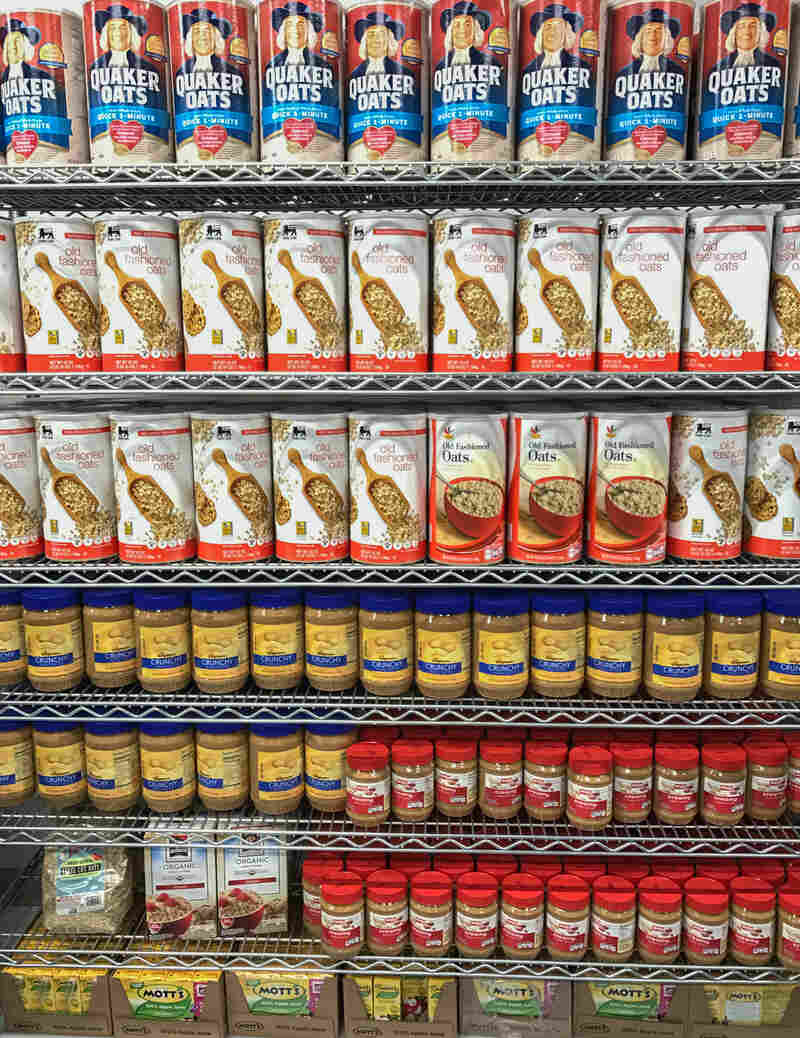 Each week, Shicowich and the other participants come to the food pharmacy. In its new incarnation, it looks more like a grocery, with neatly stocked shelves filled with healthy staples such as whole grain pasta and beans. The refrigerators are full of fresh produce, greens, low-fat dairy, lean meats and fish.

The participants meet one-on-one with a registered dietitian. They're given recipes and hands-on instruction on how to prepare healthy meals. Then, they go home with a very different kind of prescription: five days' worth of free, fresh food.

Shicowich says it's a huge change from his old habit. "I would stop at a Burger King or a McDonald's or buy a frozen Hungry-Man dinner, basic bachelor food — you know, heat and eat."

But those days are over. Now, he and his girlfriend cook meals at home. He says now it's much easier to climb a flight of stairs or take a walk with his girlfriend.

Shicowich's health has improved. His blood sugar and blood pressure have dropped so much that if he keeps on track, his doctors say they will reduce his medications.

"It's life-changing," David Feinberg, the president and CEO of Geisinger Health System, says of the results Geisinger has seen.

He says, so far, all the patients in the pilot program have made similar improvements. "It's mind-blowing," he says. And he says the range of support patients are offered — everything from dietary counseling to wellness classes and workshops — can help them succeed.

Take, for instance, the significant declines in patients' hemoglobin A1C levels. This is a blood test used to track how well patients with diabetes are controlling their blood sugar.

A year ago, Shicowich's A1C was close to 11. Now it's down in the high-6 range. Anything under 6.5 is considered below the threshold of Type 2 diabetes, according to the Mayo Clinic. Feinberg says this means that Shicowich — and other participants in the program — have a much better chance of avoiding many complications of Type 2 diabetes if they can maintain their A1C levels down in this range.

"[They] won't go blind; [they] won't have kidney disease, amputations," Feinberg says. "The list goes on and on."

Cheaper than paying for complications

When this program started, some questioned the premise of giving away free, fresh food to patients with diabetes. But keep in mind, the costs associated with diabetes in the U.S. now exceed $240 billion a year.

Once you consider that price tag, Geisinger's program can look like a bargain. Over the course of a year, the company will spend about $1,000 on each Fresh Food Pharmacy patient. All of the participants in the program are low-income, so the gift of the food eliminated a key obstacle to eating well. 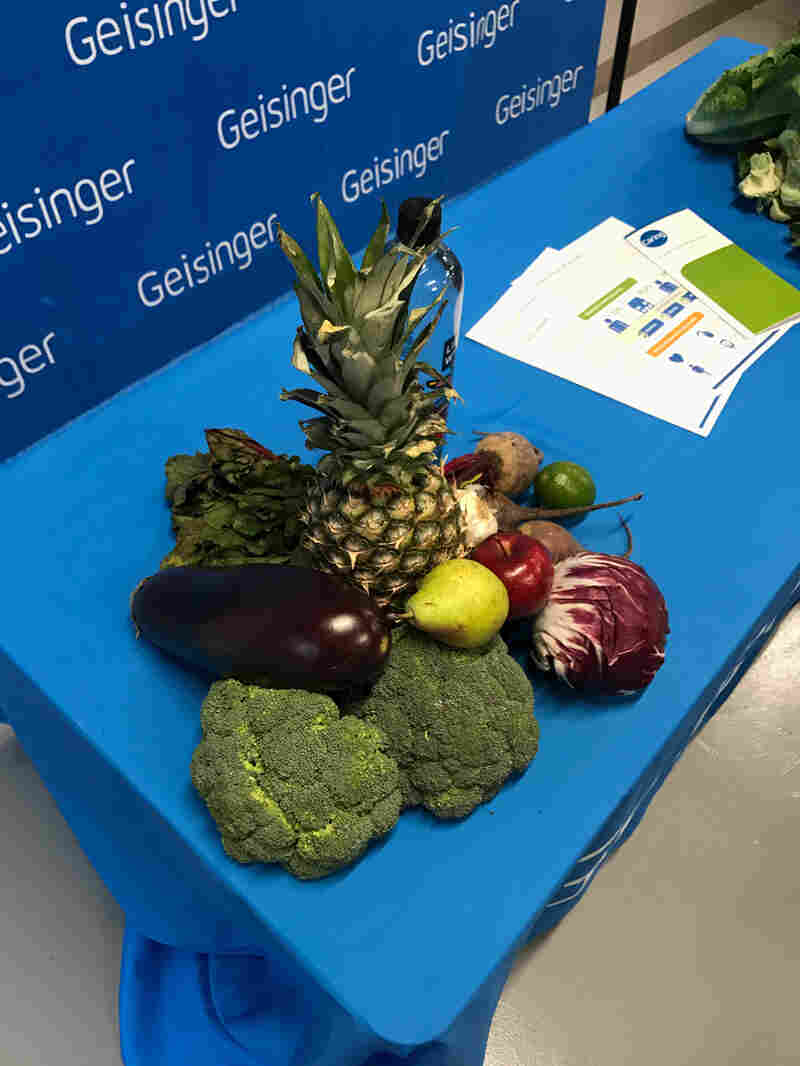 Patients enrolled in the Fresh Food Pharmacy program receive about a week's worth of free, fresh produce and other healthy items. Allison Aubrey/NPR hide caption 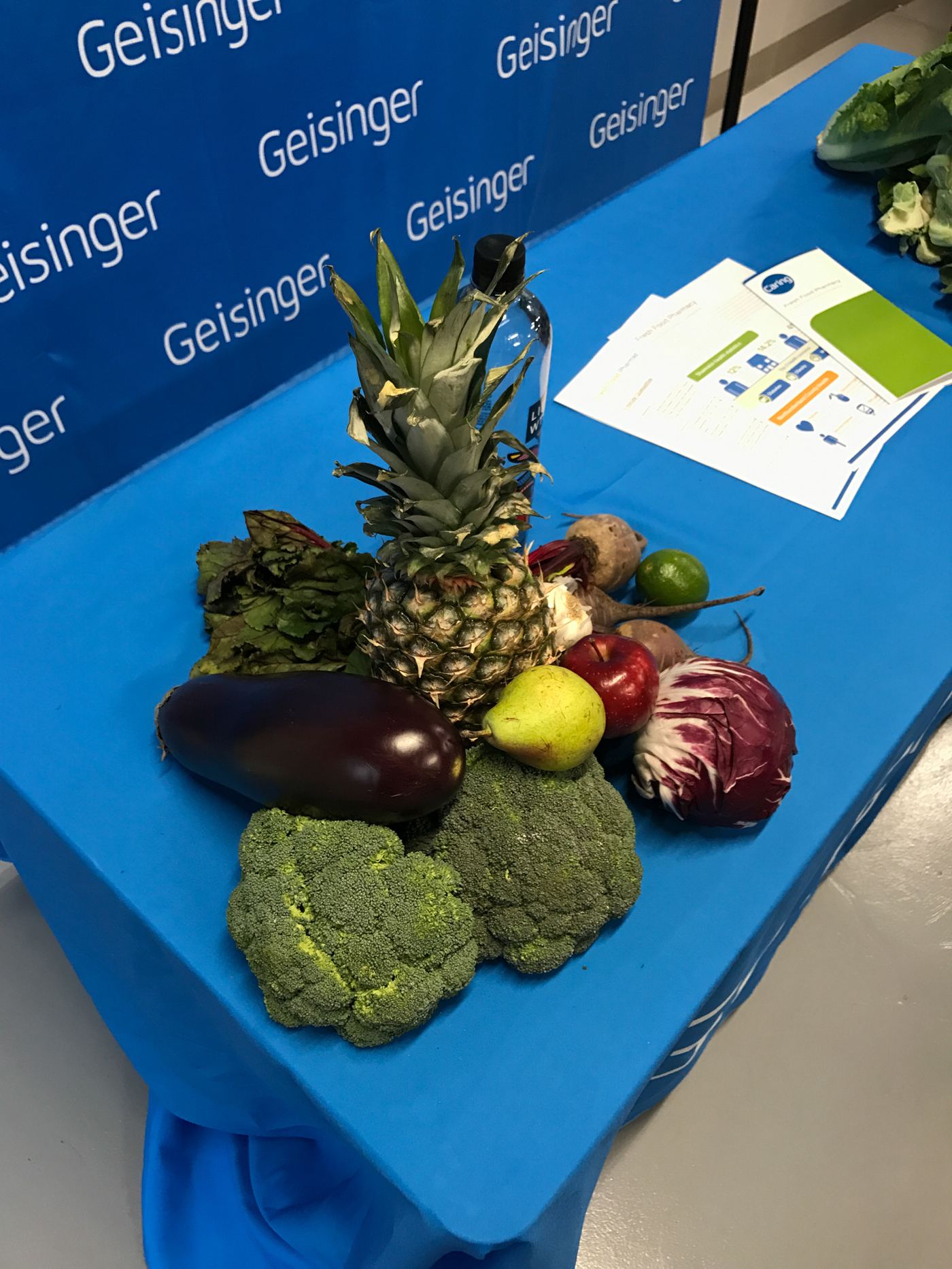 Patients enrolled in the Fresh Food Pharmacy program receive about a week's worth of free, fresh produce and other healthy items.

But would this lead to a reduction in health care costs?

Feinberg says as his team tracks hemoglobin A1C levels in the pilot participants, it is also assessing the number of medical visits and sicknesses along with the overall cost of caring for these patients.

It's still early days, and the team plans to fully analyze its first year of data. But here's what it estimates so far: "A decrease in hemoglobin A1C of 1 point saves us [about] $8,000," Feinberg says.

And many of the participants have seen a decline in hemoglobin A1C of about 3 points. "So that's [about] $24,000 we're saving in health care costs," Feinberg says. "It's a really good value." Geisinger is now in the process of expanding the program to new locations within Pennsylvania.

Is prevention medicine the future?

This program is an example of the booming interest in prevention-oriented medicine.

The current health care system in the U.S. is often more aptly described as a disease-care system. "It's reactive," says Mitesh Patel, a physician and assistant professor of health care management at The Wharton School at the University of Pennsylvania. "We wait until people get sick and then spend lot of resources helping them get better."

But Patel says there are signs this is beginning to change. "I think the paradigm shift has already begun," he told us. Patel's take on Geisinger's new Fresh Food Pharmacy program: It includes the kind of financial and social incentives that can help motivate people to make changes.

For instance, the Fresh Food Pharmacy gives free, fresh food not just to the patients enrolled but to everyone in their household as well.

"The way we behave is really influenced by others around us," says Patel. So promoting a group effort could "make the program a lot more sticky and more likely to succeed."

It's always a challenge to get people to maintain lifestyle changes over the long term. But, Patel says, "If you get the entire family to change the way they eat, you're much more likely to improve health." 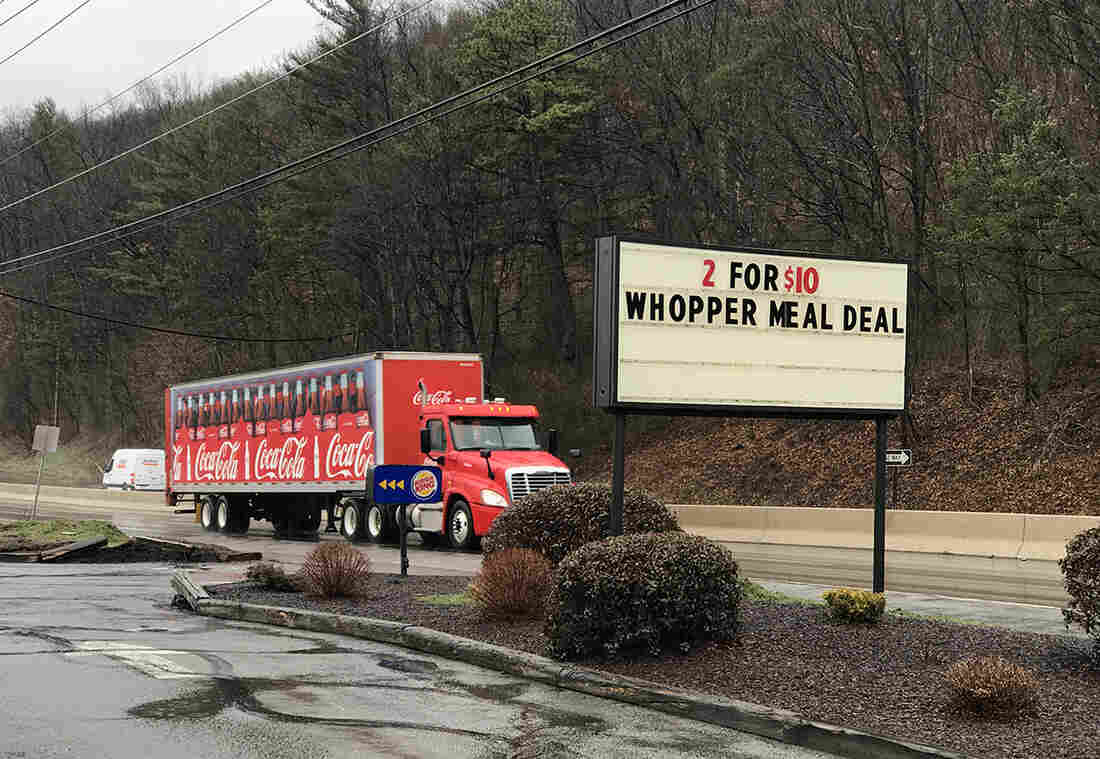 A Coca-Cola truck drives past a Burger King in Northumberland County, Pa. More than 40 percent of county residents have conditions that put them at risk of diabetes, and 14.2 percent of households are food-insecure. Allison Aubrey/NPR hide caption

The evidence that lifestyle-modification programs can reduce health care costs is starting to accumulate.

Earlier this year, researchers published findings in the journal Health Affairs that evaluated the medical expenses of Medicare patients with prediabetes. The patients had completed a one-year diabetes prevention program focused on healthy eating and increased physical activity. The researchers found, overall, the average health care savings was about $300 per person, per quarter — compared with patients who hadn't been through the program.

A previous version of this story misspelled a reference to Tom Shicowich's last name as Shicovich.