Accessibility links
Here's What Michelle Obama Thinks About Trump's School Lunch Rules : The Salt The former first lady got fired up talking about the issues she championed during her eight years in the White House. Last week the Trump administration announced changes to school nutrition rules. 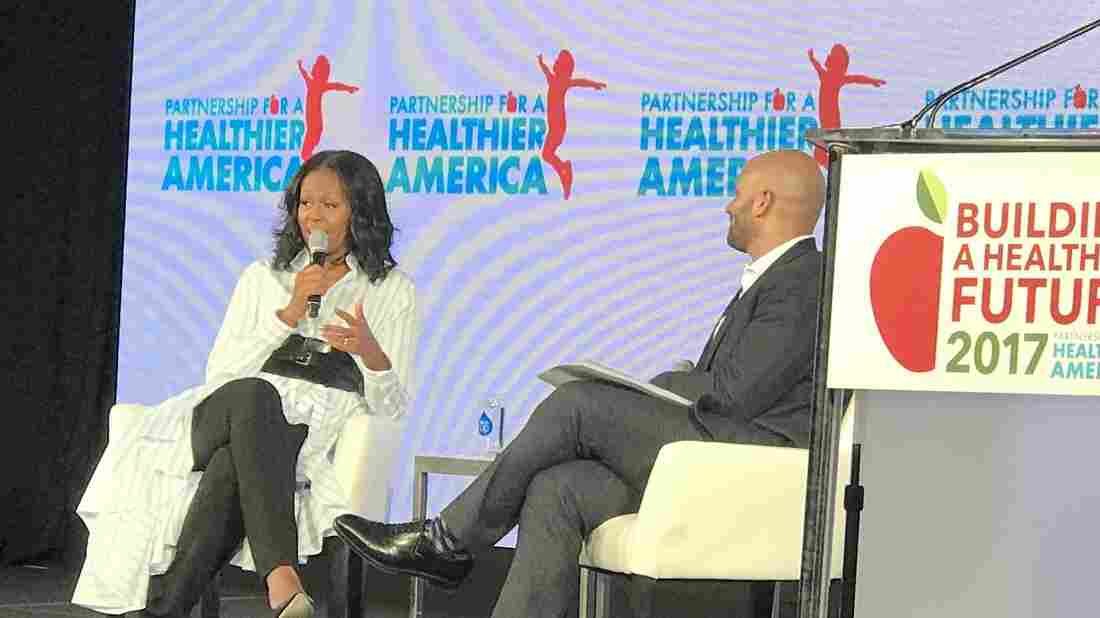 Michelle Obama speaks at the Partnership for a Healthier America conference in Washington, D.C., on Friday. Allison Aubrey/NPR hide caption 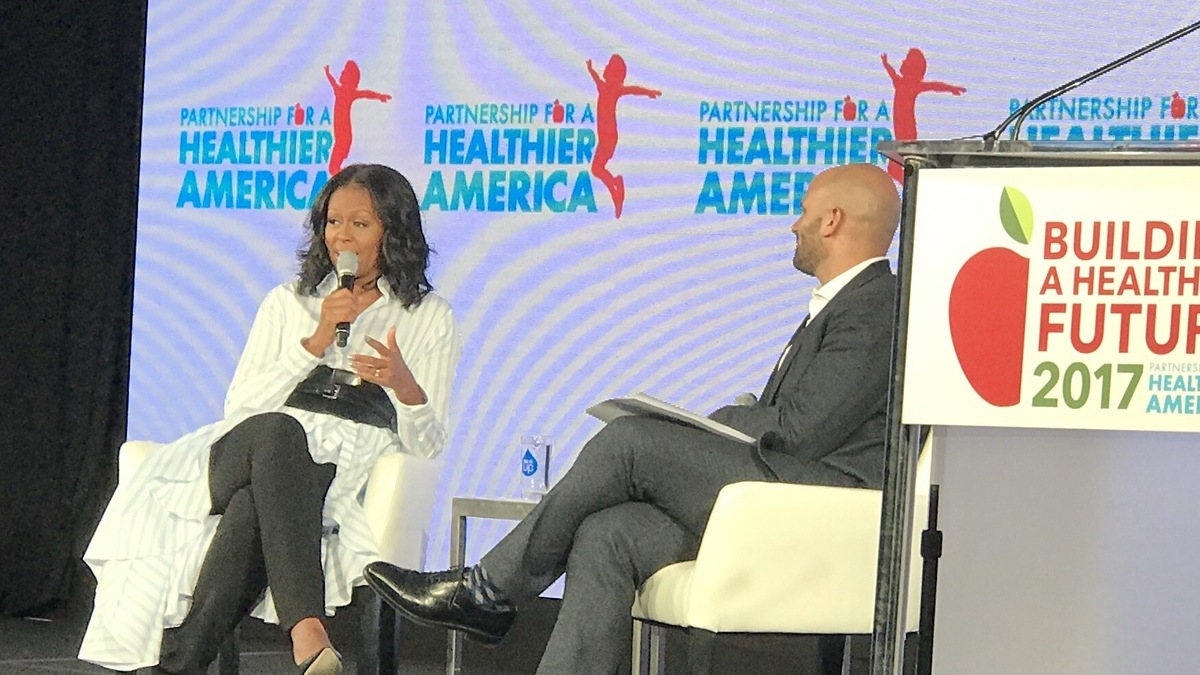 Michelle Obama speaks at the Partnership for a Healthier America conference in Washington, D.C., on Friday.

When it comes to feeding kids a healthy diet, "it's not politics, it's parenting," Michelle Obama said Friday.

And then she got a little fired up.

Without ever naming President Trump, the former first lady took aim at changes the administration announced last week that weaken some of the school nutrition standards she championed.

"Think about why someone is OK with your kids eating crap," she told the crowd at the Partnership for a Healthier America conference.

"We gotta make sure we don't let anybody take us back," she said as the crowd cheered. "Every elected official on this planet should understand: Don't play with our children. Don't do it," Obama implored.

Trump's agriculture secretary, Sonny Perdue, announced changes to the school lunch program during a visit to a school cafeteria in Leesburg, Va. He said he had listened to the complaints of students and school food administrators. "We all know that kids are pretty outspoken about what they want to eat and what they don't," Perdue said.

"[School] meals can't be nutritious if they're ... put in the trash. We've got to balance the nutritional aspect - the sodium content, the whole grain content - with the palatability," Perdue said at the time.

But changes to school nutrition rules — and delays on calorie labeling (also announced by the Trump administration last week) — aren't likely to hold back the momentum of the movement for healthier eating habits.

This is the conclusion of attendees gathered on Friday at the Partnership for a Healthier America conference in Washington, D.C., where Obama spoke.

The nonprofit group works with private-sector companies and partners to nudge them to make commitments to promote healthier products and practices. For instance, this week, the PHA announced new commitments from global chocolate and candy companies, including Mars Chocolate and Nestle USA, to limit portion sizes and label calories on the front of packages.

Another commitment came from the National Association of Convenience Stores, which pledged to an industry-wide effort to promote healthier choices to consumers.

The PHA got its start with the help of Michelle Obama's leadership. And she still serves as the group's honorary chair.

"The PHA was probably the smartest thing that we [did] out of the White House — helping to build an outside nonprofit organization that ... can work hand-in-hand with the private sector and public sector and build partnerships in a positive way," Obama said at the event.

And she added that, though she's taking time to breathe after eight years in the White House, she's still very much committed to working towards a healthier America. "You've got me as a partner as long as I can continue to be of use," she said.