Accessibility links
Many Of California's Salmon Populations Unlikely To Survive The Century : The Salt Climate change, dams and agriculture are threatening Chinook salmon, the iconic fish at the core of the state's fishing industry, a report predicts. And 23 other fish species are also at risk. 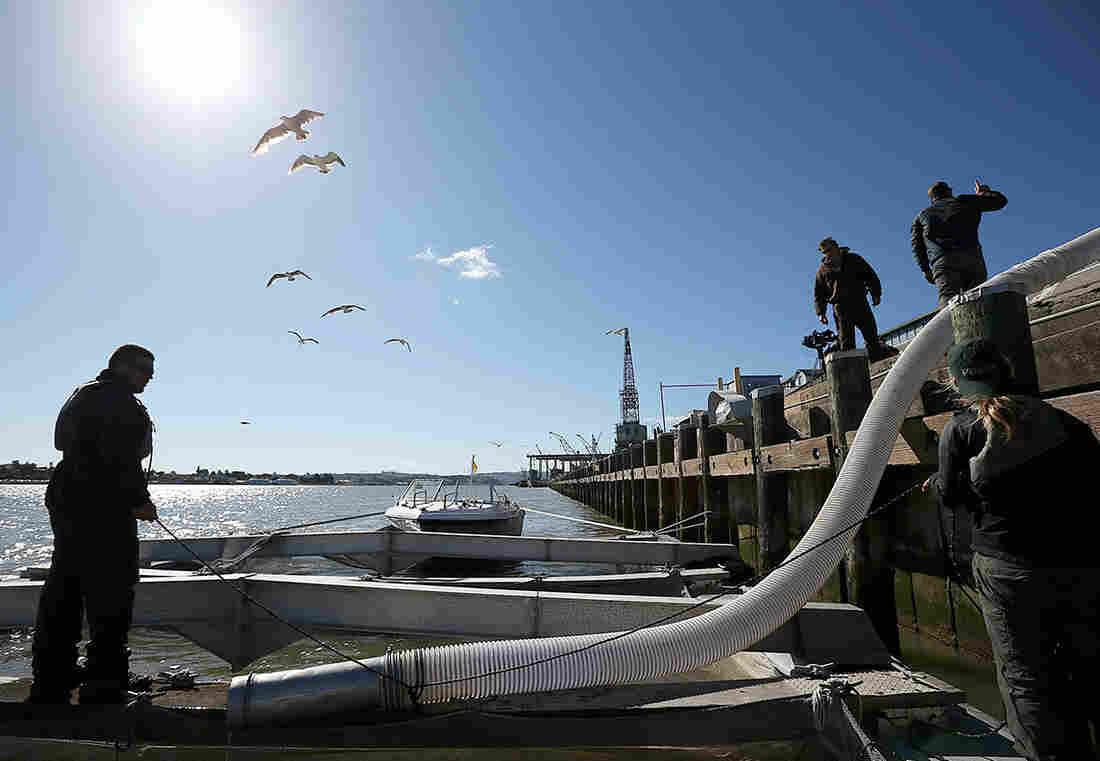 Workers prepare to release thousands of fingerling Chinook salmon into the Mare Island Strait in Vallejo, Calif., in 2014. A new report names climate change, dams and agriculture as the major threats to the prized and iconic fish, which is still the core of the state's robust fishing industry. Justin Sullivan/Getty Images hide caption 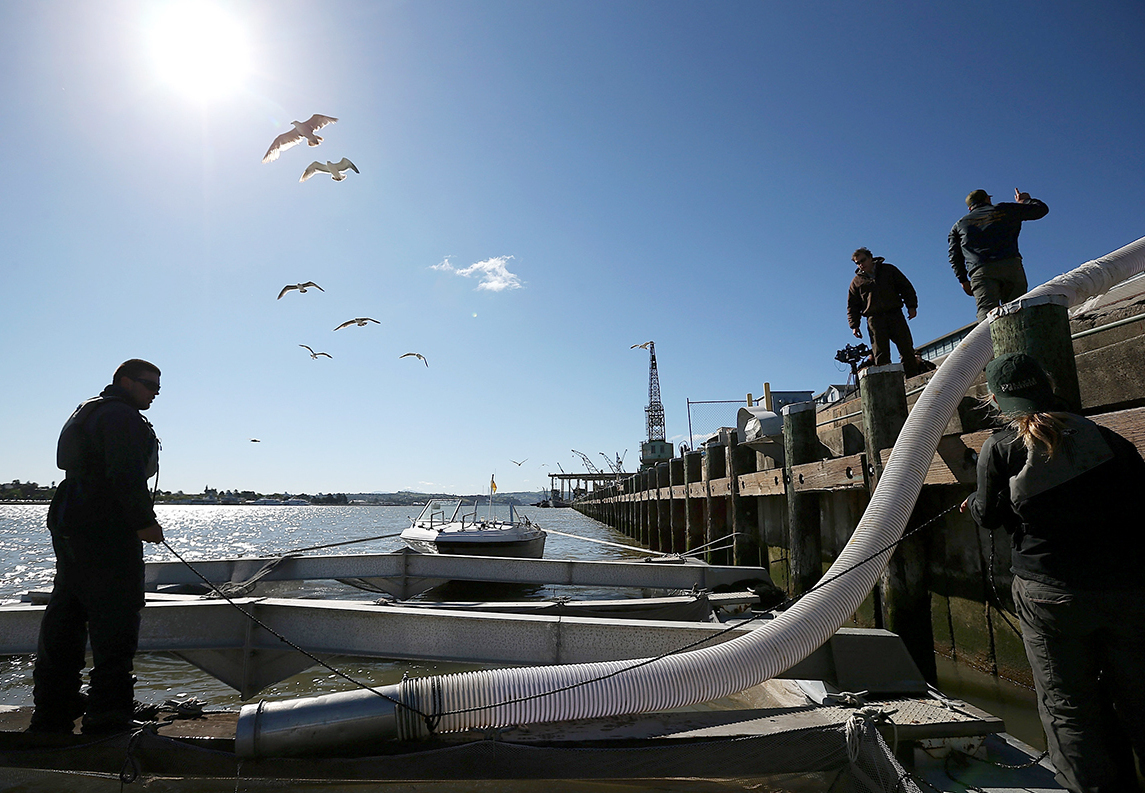 Workers prepare to release thousands of fingerling Chinook salmon into the Mare Island Strait in Vallejo, Calif., in 2014. A new report names climate change, dams and agriculture as the major threats to the prized and iconic fish, which is still the core of the state's robust fishing industry.

Wild Chinook salmon, probably the most prized seafood item on the West Coast, could all but vanish from California within a hundred years, according to a report released Tuesday.

The authors, with the University of California, Davis, and the conservation group California Trout, name climate change, dams and agriculture as the major threats to the prized and iconic fish, which is still the core of the state's robust fishing industry.

Chinook salmon are just one species at risk of disappearing. All told, California is home to 31 genetically distinct kinds of salmon and trout — 23 of which are at risk of going extinct sometime in the next century, according to the report.

The report, titled State of the Salmonids II: Fish in Hot Water, comes as an update to a 2008 assessment that made similar conclusions – except that nine years ago, the outlook wasn't nearly so bad. At the time, the authors – among them UC Davis fisheries biologist Peter Moyle, who works at the university's Center for Watershed Sciences and also contributed to the new report – concluded that five genetically distinct types of California salmon might vanish in the next five decades.

Now, the 50-year outlook is three times as bad, with 14 species and subspecies deemed likely to disappear if current trends continue. Though some factors affecting fish, like degraded river habitat and excessive diversions for irrigation, can be reversed, the report says climate change, already underway, could devastate California's salmon and trout populations.

"As we began drafting the 2017 report, we realized that the new information and increasingly obvious impacts of climate change required us to rethink the metrics used in the 2008 report to evaluate status [of each species]," says Moyle, who wrote the new report with UC Davis colleague Robert Lusardi and California Trout's conservation program coordinator, Patrick J. Samuel.

Salmon and trout depend on clean – and, especially – cold water. But as the Earth warms, there will be less snow and cold water in the mountains where rivers, like the once salmon-rich Sacramento and the Klamath, begin. Many waterways will become too warm for the fish to tolerate, or even dry up completely, in the summer months, the authors predict.

Agriculture can have similar impacts on watersheds, and in their 106-page report, the authors repeatedly cite production of food, marijuana, wine and other crops as a major threat to California's salmon and trout. Farming and grazing can foul waterways with eroded sediments and chemicals. Irrigating crops also means pumping large amounts of water out of rivers, which can disrupt salmon migration patterns or strand them in warm, shallow water.

On California's North Coast, in a region known as the "emerald triangle" for its marijuana production, Coho salmon – once thick in nearly every small coastal creek as far south as Santa Cruz – are critically threatened, according to the report. The authors estimate that, as recently as 75 years ago, 100,000 to 300,000 Coho spawned each year in northern California's and southern Oregon's coastal streams. Today, less than 5,000 still swim upstream to lay and fertilize their eggs. 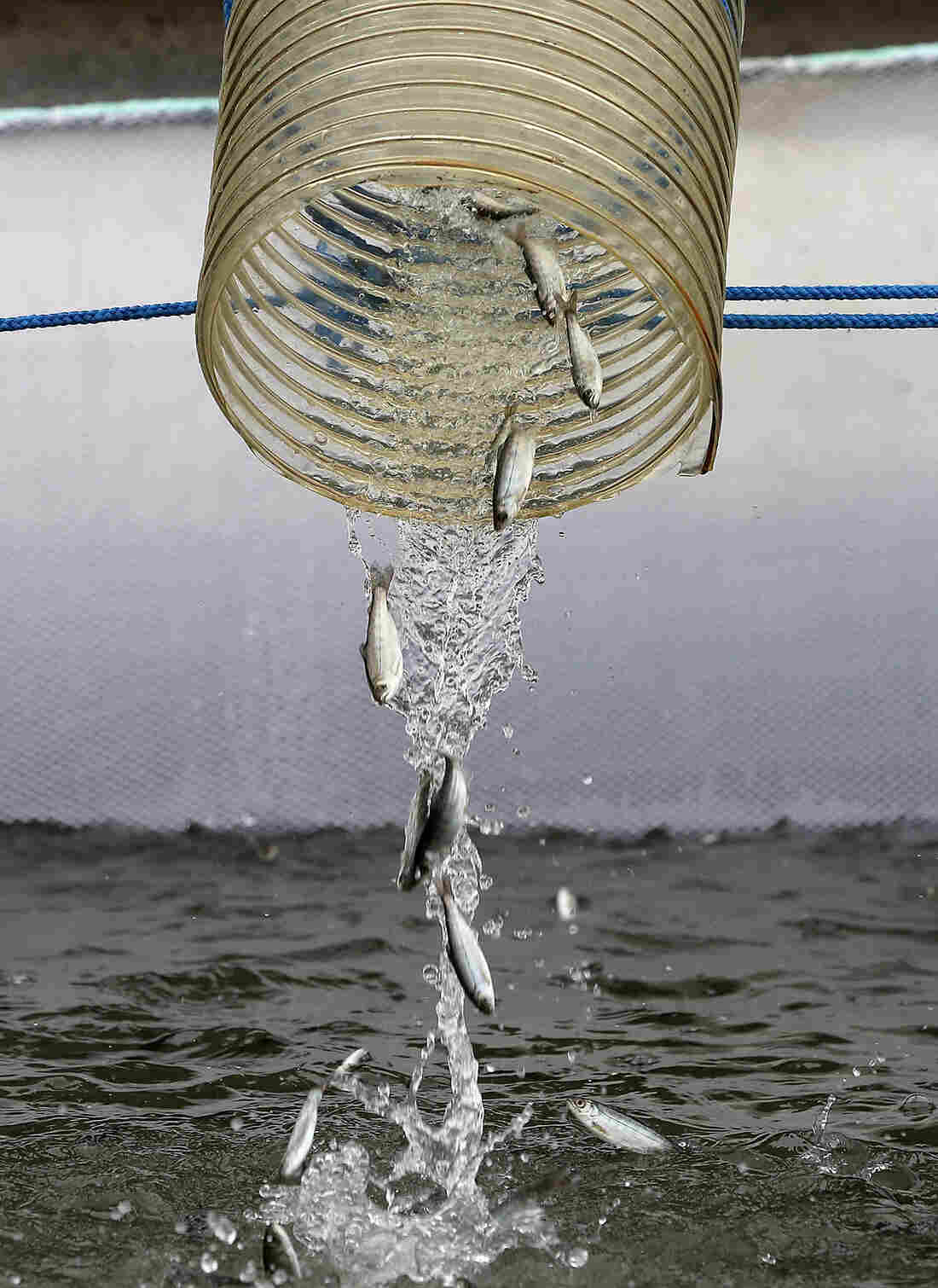 Fingerling Chinook salmon are dumped into a holding pen as they are transfered from a truck into the Sacramento River in Rio Vista, Calif., in March 2014. Justin Sullivan/Getty Images hide caption

Northern California marijuana growers — whose crop was legalized late last year – are known to suck dry creeks where Coho salmon spawn, especially in the summer, when virtually no rain falls in most of the state and growers become especially reliant on irrigation.

The juveniles of Chinook salmon, by contrast, spend just a few months in freshwater before migrating to the sea, which makes them somewhat less vulnerable to inland habitat loss. Still, Chinook salmon – the only salmon species that is commercially fished and marketed in California – are not doing well, either. The report says six of California's eight genetically distinct Chinook populations are likely to disappear.

While hundreds of thousands of Chinook still spawn in California in a productive year, these prized fish are mostly the products of hatcheries that fertilize salmon eggs in tanks and release babies into the wild at several months of age. According to the authors, this life-support system, though good for fishermen in the short term, is bad for wild, self-sustaining runs of salmon and steelhead. That's because the hatchery fish often spawn with wild fish, weakening gene lines and blurring the genetic distinctions between different populations.

California's salmon are not necessarily all goners. The authors suggest restoring riverside floodplains and coastal marshes, where young fish find abundant food. They also recommend focusing conservation efforts on streams that arise from mountain springs. Such spring-fed creeks will likely remain cold even as the planet warms, and they might be the only places for salmon to spawn in the future. Removing dams also could allow salmon access to cold-water tributaries, the authors say.

During a media teleconference call on Tuesday, California Trout's executive director Curtis Knight said native salmon might still be a part of California's culture, economy and diet in the future.

"We do still have time, and we are optimistic that with some effort, we can have a future that involves these fish," he said.