Accessibility links
Government Confirms A Surge In Foreign Guest Workers On U.S. Farms : The Salt Government statistics show a big increase in the number of foreign guest workers approved to work on American farms this year. It's up 36 percent over the same period last year. 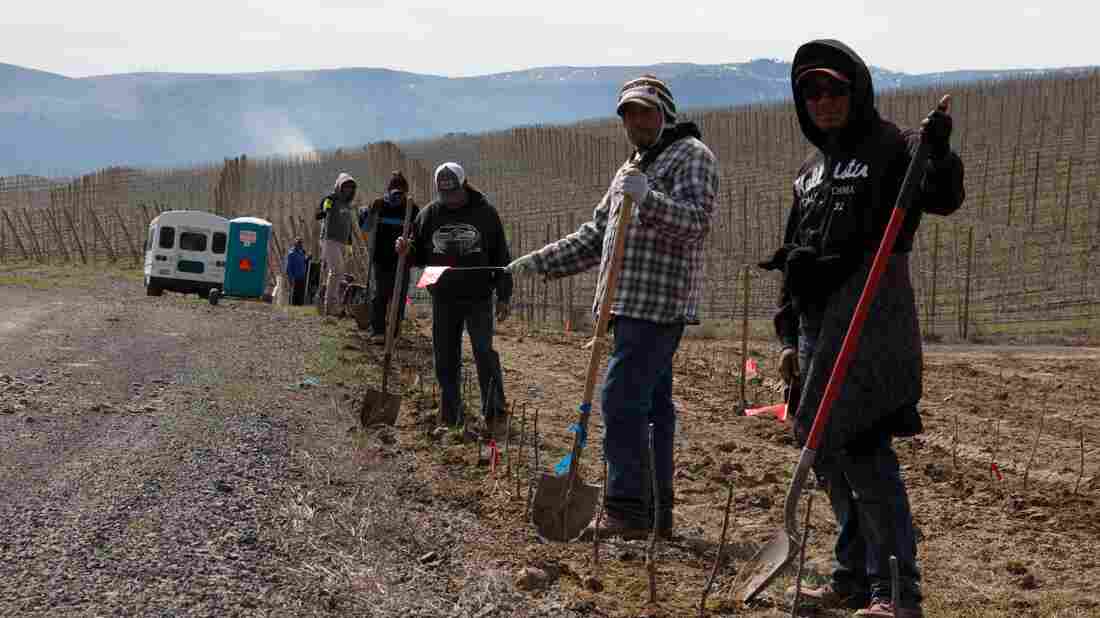 The workers planting apple trees at this orchard in Wenatchee, Wash., came to the U.S. on temporary visas for farm workers. Dan Charles/NPR hide caption 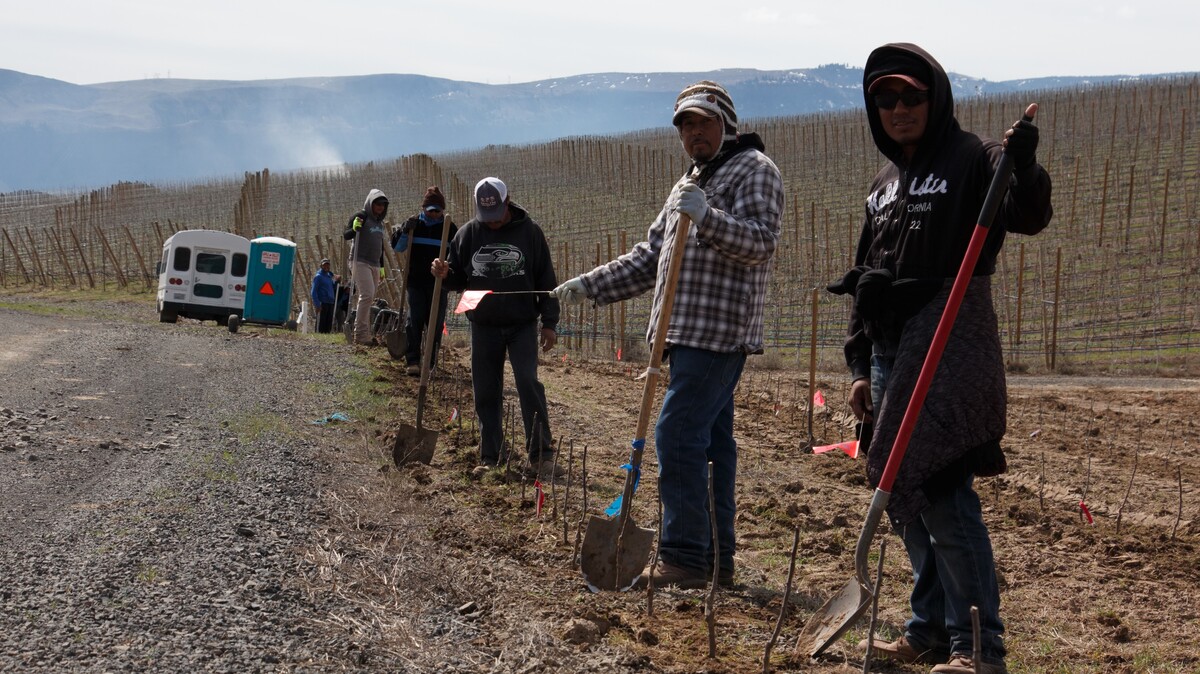 The workers planting apple trees at this orchard in Wenatchee, Wash., came to the U.S. on temporary visas for farm workers.

The numbers are out — and they confirm what we've been hearing from farmers and immigration lawyers. More and more farmers are turning to foreign "guest workers" to plant and harvest the country's crops.

Farmers have to get permission from the U.S. Department of Labor to bring in foreign workers using a category of visa called H-2A. During the first three months of 2017, the Department of Labor approved applications to fill 69,272 farm jobs with workers on H-2A visas. That's up from 50,887 positions approved during same period a year ago, an increase of 36 percent.

The H-2A visa program has been growing steadily in recent years, mostly because farmers have had increasing difficulty recruiting enough workers here in the U.S. Previous increases, though, ranged from 10 to 20 percent per year, far short of the big jump so far in 2017.

The guest worker program has been controversial, for several reasons. Some farm worker advocates argue that employers have used the program to avoid having to attract workers the old-fashioned way, through higher wages. Temporary workers also have limited rights; they cannot leave their jobs or switch employers, and critics say it leaves them vulnerable to abuse or mistreatment. They're also separated from their families for much of the year. On the other hand, employers are required to provide free housing to H-2A workers and to pay them a fair wage, as determined by the Department of Labor. These workers also are here legally; they don't have to hide from law enforcement.

Dan Fazio is executive director of WAFLA, which helps arrange foreign temporary workers for tree fruit growers in Washington state. He tells The Salt in an email that on April 21, his organization stopped taking requests for workers needed in 2017 because he just didn't have enough staff. WAFLA recruits foreign workers and transports them to the state.

Employers say that the big jump in H-2A applications is partly because the worker shortage is getting worse. But it's also because farmers who hire lots of workers — and the workers themselves — are worried about the Trump administration's tougher enforcement of immigration laws. Many farm workers who live in the United States are citizens of Mexico or Central American countries and don't have legal authorization to be in this country.

The government's statistics also show a shift in the places that depend on H-2A workers. For many years, North Carolina's sweet potato and tobacco farms were the top destination for temporary foreign workers. In fiscal year 2017, though, which started in October 2016, North Carolina has fallen well behind both Florida and Georgia. California, meanwhile, has jumped up to fourth place.

Foreign temporary workers still account for a small portion — perhaps 10 percent — of the workers who tend the country's crops. But their importance is increasing rapidly and could reach 20 percent in the near future, according to some experts, such as Philip Martin, an emeritus professor at the University of California, Davis.