Accessibility links
Cloud Eggs: The Latest Instagram Food Fad Is Actually Centuries Old : The Salt The fanciful dish was meant to impress nearly 400 years ago, so don't roll your eyes at photos of these pretty edibles: They're actually a time-honored tradition tinged with a bit of kitchen science. 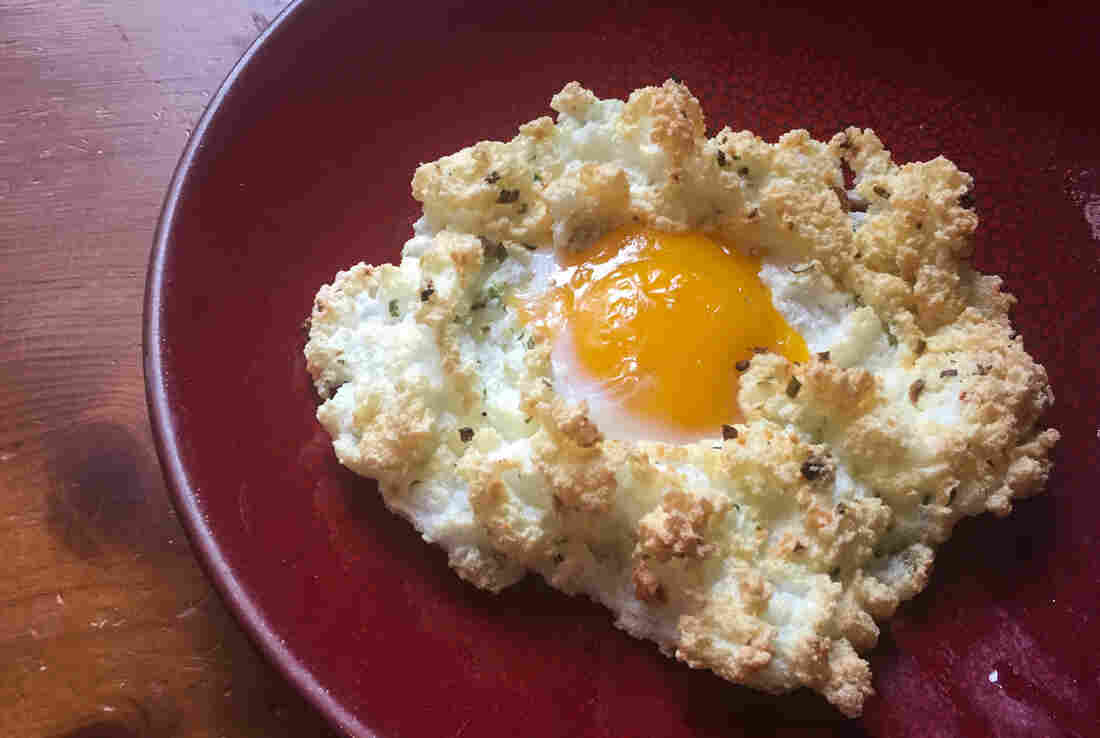 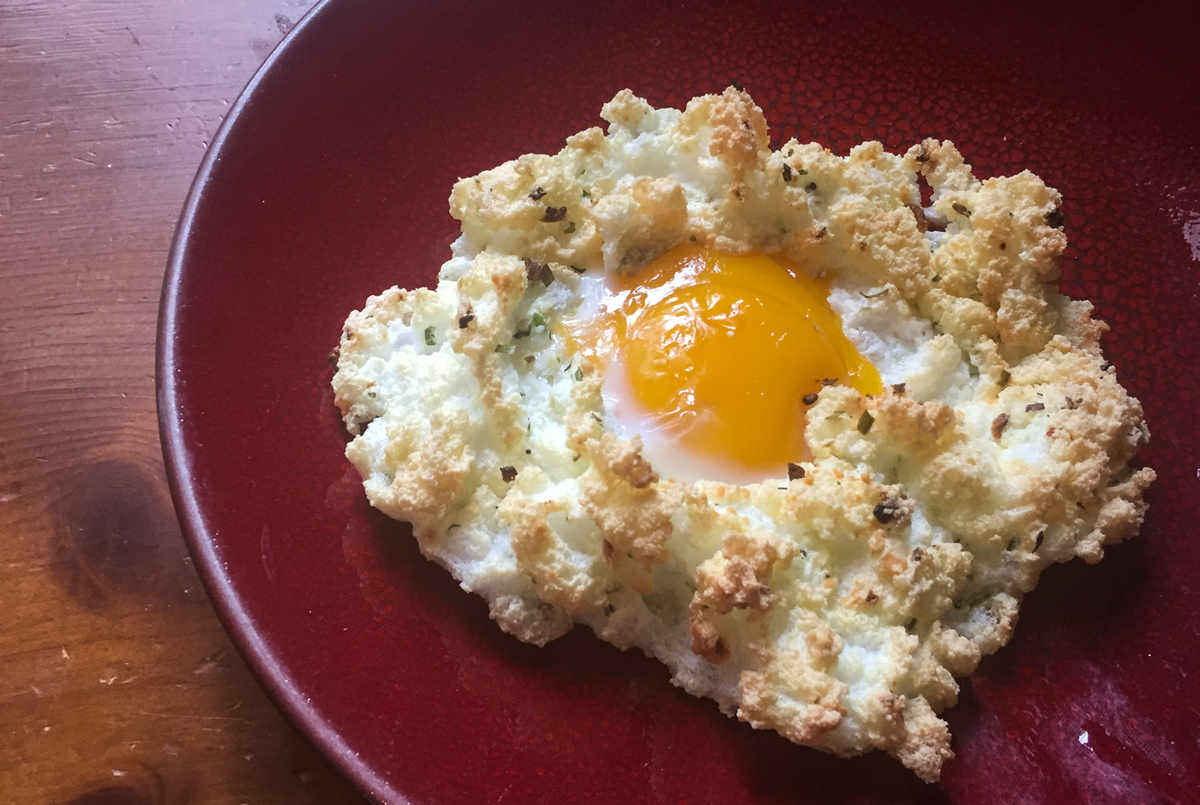 Cloud eggs: It's not just Instagrammers who find them pretty. Chefs of the 17th century whipped them up, too. Then, as now, they were meant to impress.

They're seemingly unavoidable on Instagram these days: photos of bright yellow egg yolks nestled in a fluffy bed of egg whites, like the sun framed by billowy clouds. They're called cloud eggs, and they're pretty enough to look like a taste of heaven ... which is probably why people are obsessively whipping them up and sharing their pictures on social media.

Yet the latest food fad du jour is actually a modern spin on a nearly 400-year-old recipe.

"They are basically a very, very old dish. It's essentially something called Eggs in Snow, which the French have been making for centuries. And it's suddenly taking off on Instagram," says Daniel Gritzer, the culinary director at Serious Eats.

He points to a recipe for Oeufs à la Neige (eggs in snow), in Le Cuisinier François, a seminal cookbook published in 1651, just as France was beginning a revolution in cookery that would make it the culinary leader of the world for centuries.

Modern cloud eggs are simple to make, but look sophisticated. Recipes vary, but basically, you take an egg, separate the whites and yolk, beat the whites into a stiff foam and season to taste. Then you scoop the foam into a cloud-like form on a baking sheet covered with parchment, leaving a hollow in the middle for the yolk, and pop it into the oven at 450 degrees Fahrenheit. In some versions, the yolk goes into the oven at the same time as the whites; in others, the whites bake first for a few minutes, then the yolk is added and the whole thing is baked for a couple of minutes longer. Baking times vary, but recipes generally call for around 5 to 6 minutes total.

The 17th century version was cooked a bit differently: Instead of hand-mixers or whisks, chefs used bundles of finely split sticks. The egg foam and yolk were placed on a buttered dish and baked atop of coals instead of in an oven. The whole thing was heated from above with a cooking tool called a salamander – basically, a hot fire shovel held over the dish. (Think of it as a 1600s version of a butane kitchen torch or a form of controlled broiling.) It was served with a sprinkle of sugar. These days, the name "eggs in snow" (or "snow eggs") denotes a different dish: a dessert made of meringue poached in sweetened milk and served with a custard. (It's a French classic, and was a favorite of famed food writer Craig Claiborne.) But the snow eggs described in that 1651 recipe were essentially the same thing as cloud eggs, agrees Paula Marcoux, a food historian who specializes in re-creating recipes using period cooking techniques. 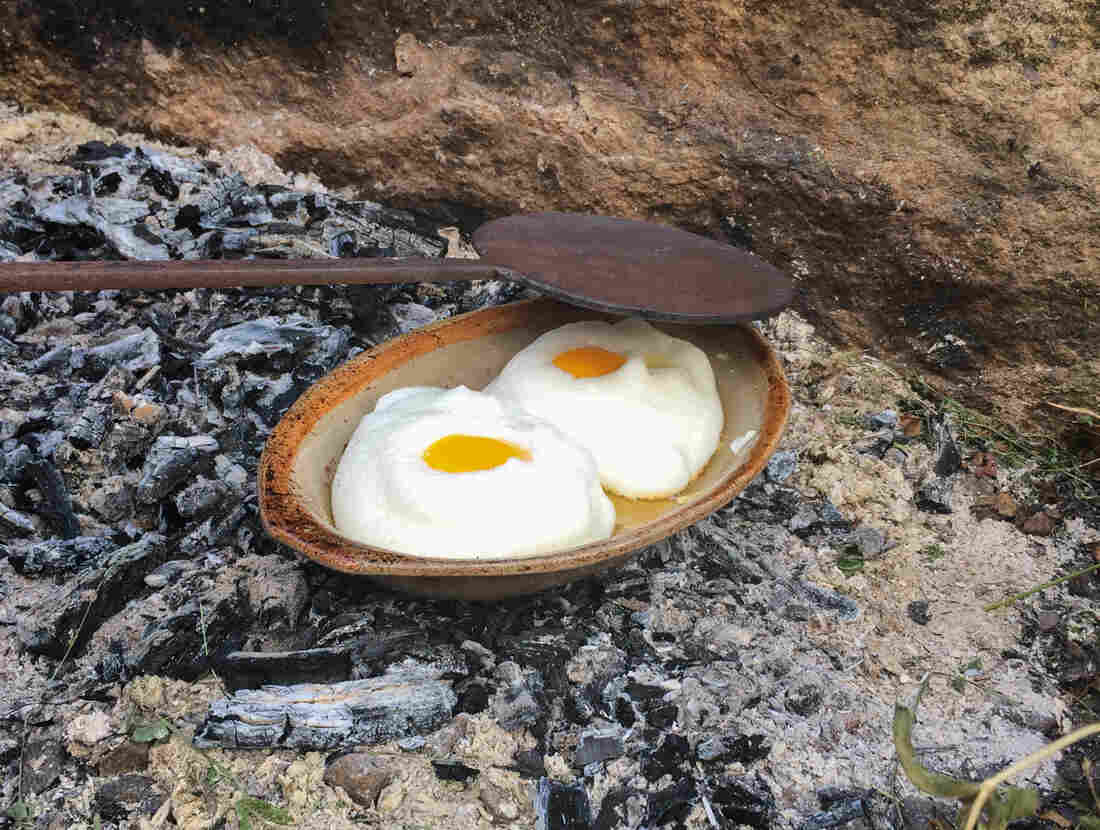 Food historian Paula Marcoux decided to follow the 1651 recipe for Eggs in Snow, using the period cooking tools it called for. Instead of an oven, she placed the eggs on a buttered dish over hot coals and heated it from above using a hot fire shovel called a salamander. The result was surprisingly delicious, she says — and yes, it was basically cloud eggs. Courtesy of Paula Marcoux hide caption 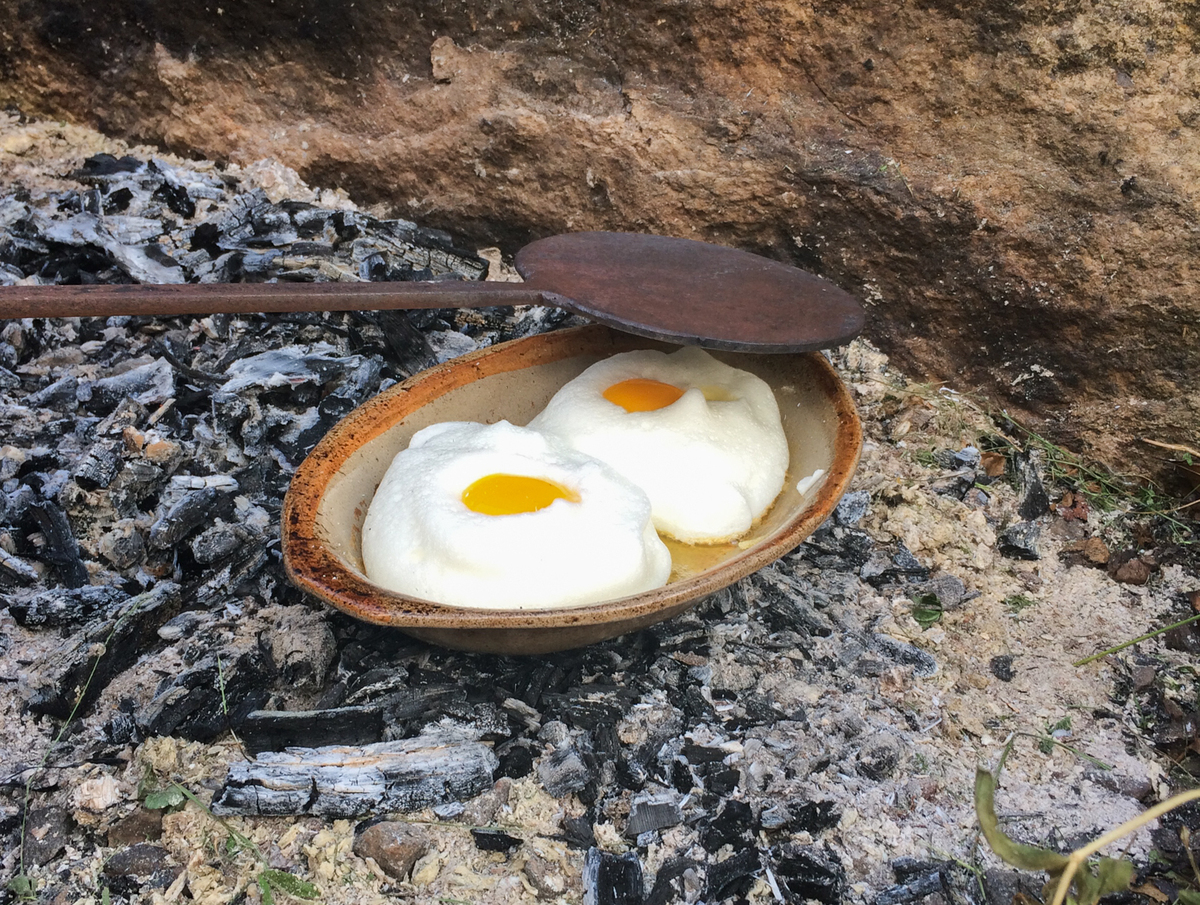 Food historian Paula Marcoux decided to follow the 1651 recipe for Eggs in Snow, using the period cooking tools it called for. Instead of an oven, she placed the eggs on a buttered dish over hot coals and heated it from above using a hot fire shovel called a salamander. The result was surprisingly delicious, she says — and yes, it was basically cloud eggs.

Like today's cloud eggs, Marcoux says, the 17th century recipe was likely a novelty dish meant to impress. "It's just one of those things rich people did for amusement ... kind of like today."

And chefs of the era were also beginning to unravel the mysteries of cooking science. "Seventeenth century people are figuring out how proteins work – it's the very earliest phases of what becomes fine French cooking," says Marcoux.

Nowadays, chefs know that when you beat an egg white, you're actually participating in a cool bit of biochemistry. Egg whites are mostly liquid, but they're full of proteins. When beaten, those proteins unfold and bind with each other, creating a structure.

"They start to arrange themselves into a network, like a net, as they bond to each other and stretch out," explains Gritzer. That structure traps the air introduced through beating, and also holds the water in egg whites in place. The result is foam.

It's a touch of kitchen magic that has fascinated cooks for centuries.

"Even in 19th-century America, people were excited," says Marcoux. And later, "in the 1950s, people were crazy about making meringue pies. It's almost something home cooks tap into as a show-offy kind of thing. We see that happening in generation after generation of home cooks."

In my home kitchen, I gave cloud eggs a whirl. On their own, they're pretty but bland. But a dash of salt and pepper, a dusting of Sunny Paris spice blend (purple shallots, chives, dill weed, basil and peppercorn, among other things) and a generous sprinkling of grated sharp cheddar, all folded into the foam before baking, fixed things nicely.

As for cloud eggs' 17th century counterpart? That was surprisingly scrumptious, says Marcoux. My queries had piqued her curiosity, so she tackled the 1651 recipe using historically accurate tools — hot fire shovel and all. She'd been skeptical beforehand, but "it was as delicious as it was silly!" she reported back.

So if you should encounter cloud eggs in the wilds of the Internet, instead of asking yourself, as The Washington Post did recently, "Uh, why is this a thing?" just know the answer is: Because we are human and there is little new under the sun — not even cloud eggs.

Maria Godoy is a senior editor with NPR and host of The Salt. She's on Twitter: @mgodoyh.