Accessibility links
If Raw Fruits Or Veggies Give You A Tingly Mouth, It's A Real Syndrome : The Salt Pollen allergies can trigger reactions to fruits and vegetables. The condition — known as oral allergy syndrome — can come on suddenly and often goes undiagnosed. 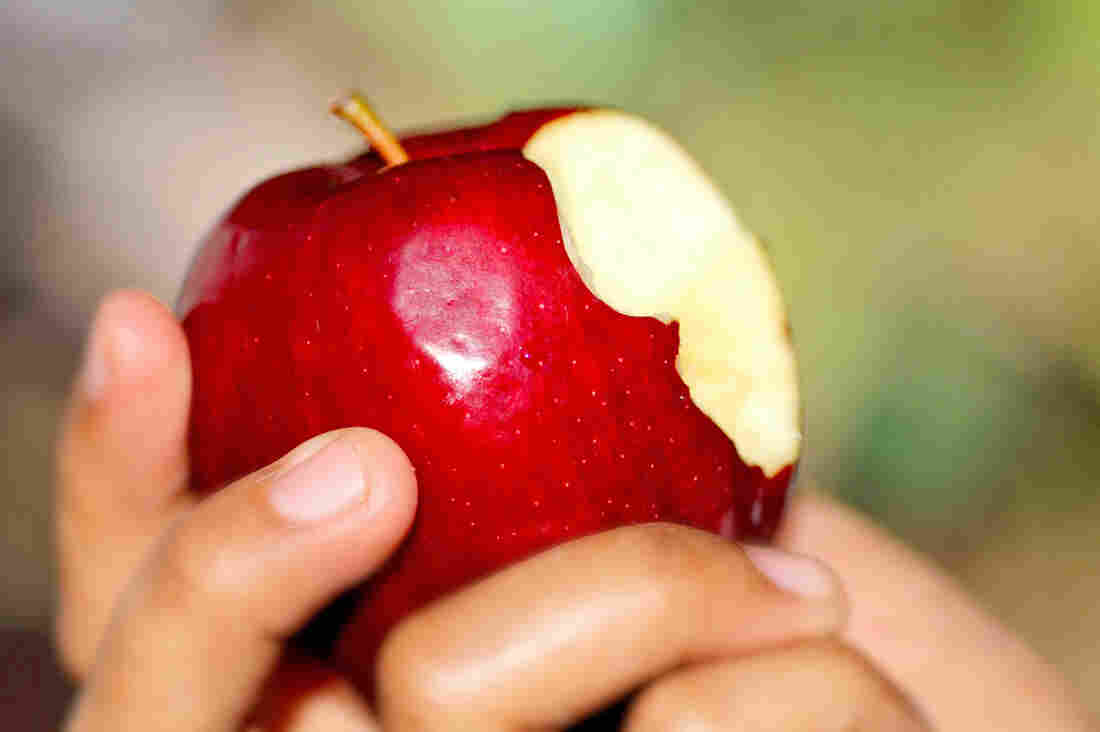 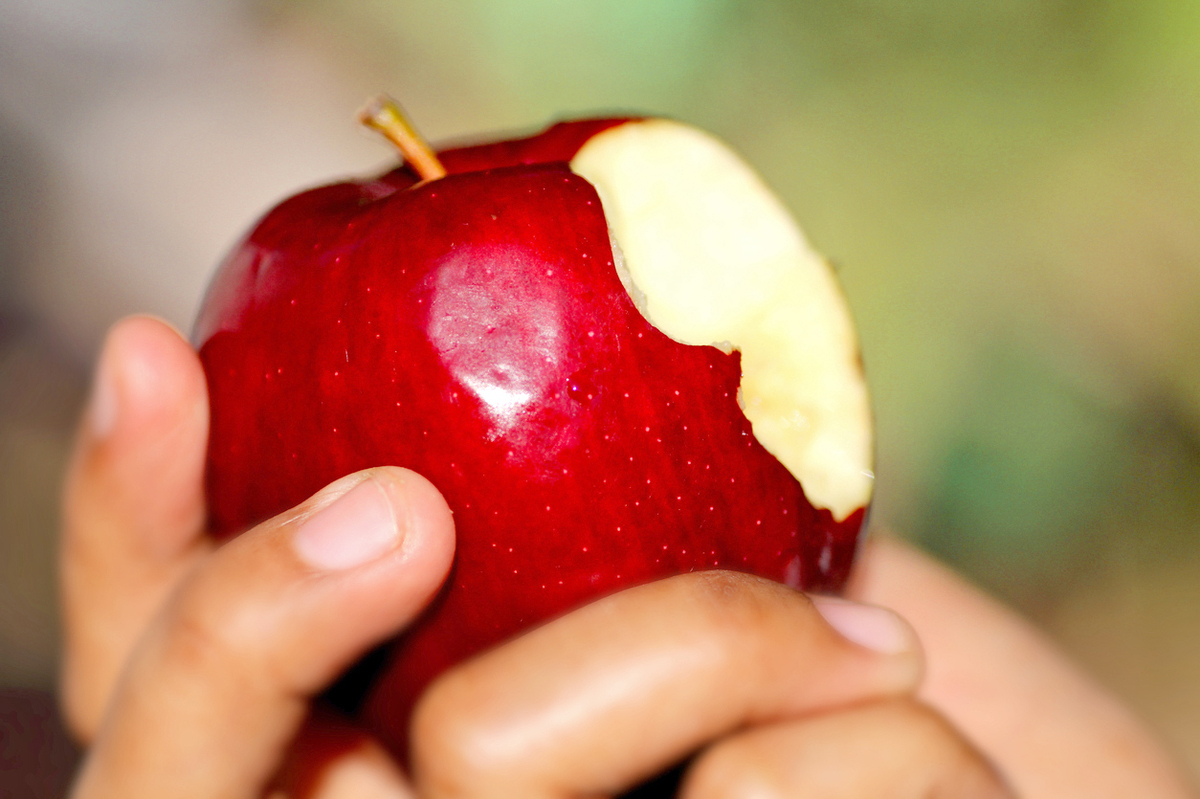 If you have ever noticed an itchy or tingly sensation in your mouth after biting into a raw apple, carrot, banana or any of the fruits and veggies listed here, read on.

People who are allergic to pollen are accustomed to runny eyes and sniffles this time of year. But some seasonal allergy sufferers have it worse: They can develop allergic reactions to common fruits and vegetables.

The allergic reactions — which are usually mild — can come on suddenly. And people can react to foods they had been eating with no problem for most of their lives.

The condition is called oral allergy syndrome. "I do think that this is one of the most underreported and underrecognized conditions, " says Dr. Carah Santos, an allergist at National Jewish Health in Denver.

"We call it cross-reactivity," explains Santos. "Your immune system sees something as looking very similar to something it already reacts to." 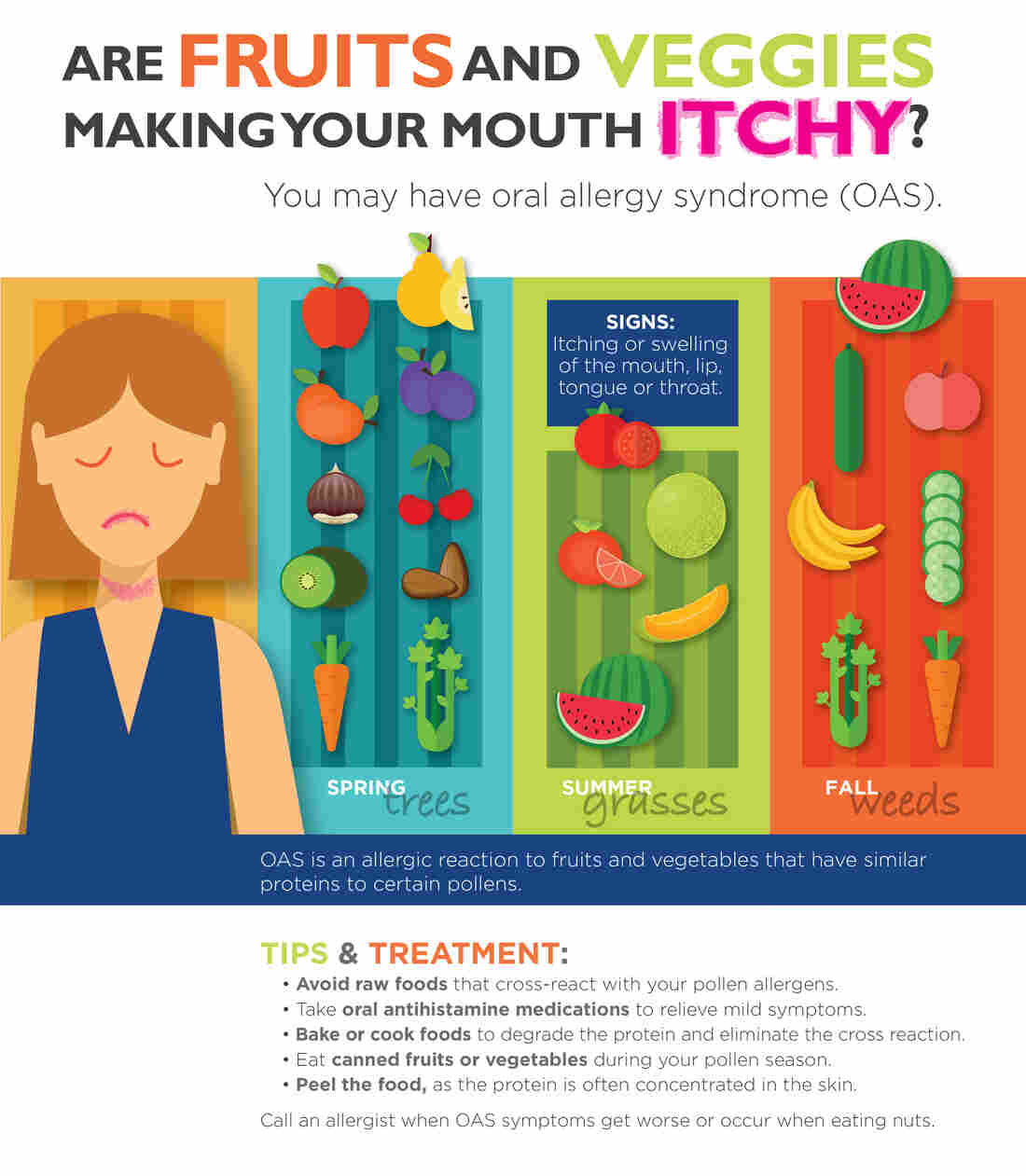 Bananas were the trigger for Jessica Slattery, who lives in the suburbs of Denver. She began to notice a reaction every time she ate one.

"The first thing I'd feel is a little itch on my tongue," Slattery says. "I'd feel it down my throat ... it's just a little tingle."

Sometimes, her lips would swell, too.

When Slattery described the reaction to her friends, they were skeptical. "They were, like, 'How could you possibly be allergic to a banana?' " Slattery recalls.

Fruits are not on the list of top allergenic foods; most people have only heard of the top culprits such as eggs, fish and nuts.

But Slattery knew it wasn't in her head. Over time, she started reacting to other foods, including kiwi, pineapple and avocado.

She noticed she was most reactive to these foods during the spring and fall, when her pollen allergies kicked in.

The standard tests to detect food allergies often come back negative for people with OAS. This happened to Slattery. "I had testing ... for everything I thought I was allergic to, and everything came back negative."

This was frustrating, she says, because several doctors could not explain what she had. Ultimately, an allergist diagnosed her with oral allergy syndrome simply by taking a detailed history of her symptoms. She says it was a relief to get the diagnosis.

People with oral allergy syndrome are typically advised to avoid the raw foods they react to. But there is a workaround: Peeling or cooking the fruits and vegetables before eating them can be helpful.

For instance, if apples cause a reaction, applesauce may be OK. Or if bananas are a problem, try banana bread instead. "Oftentimes [people with OAS] can eat these foods because the cooking process can degrade the proteins that look like the pollen," says Santos.

Here are other tips on managing oral allergy syndrome from National Jewish Health:

The experts at National Jewish Health advise that people call an allergist when OAS symptoms get worse or occur when eating nuts.