Accessibility links
'Praise The Lard': A Barbecue Legend Shows Us How To Master Smoked Chicken Wings : The Salt Mike Mills' chicken wings have been named the best in the country. He is even in the Barbecue Hall of Fame. His new book with daughter Amy Mills shares the gospel of barbecue with home cooks. 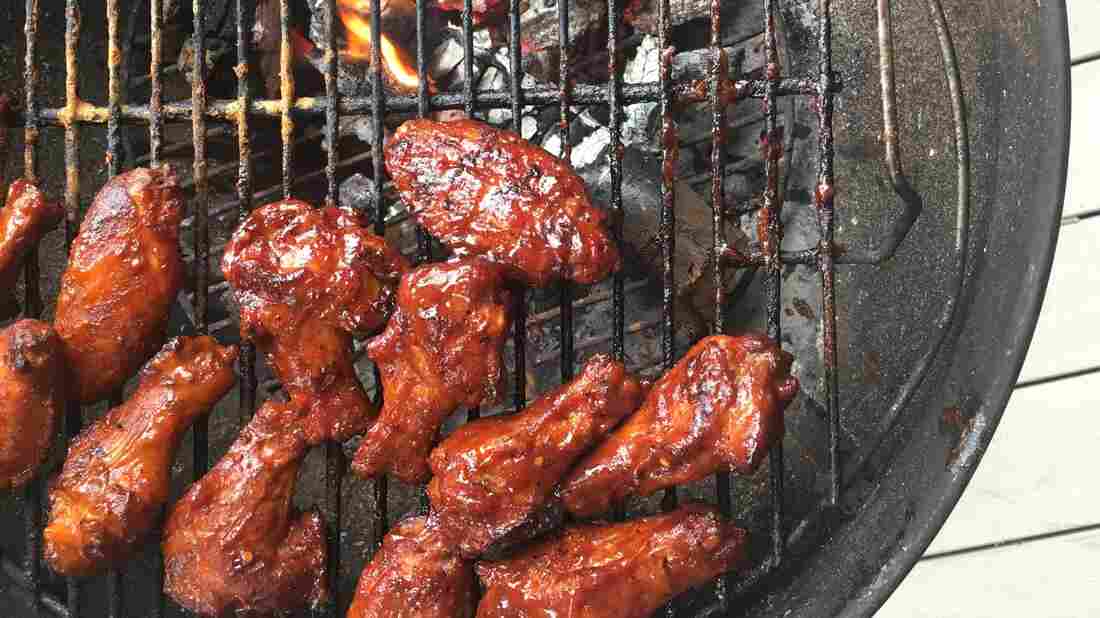 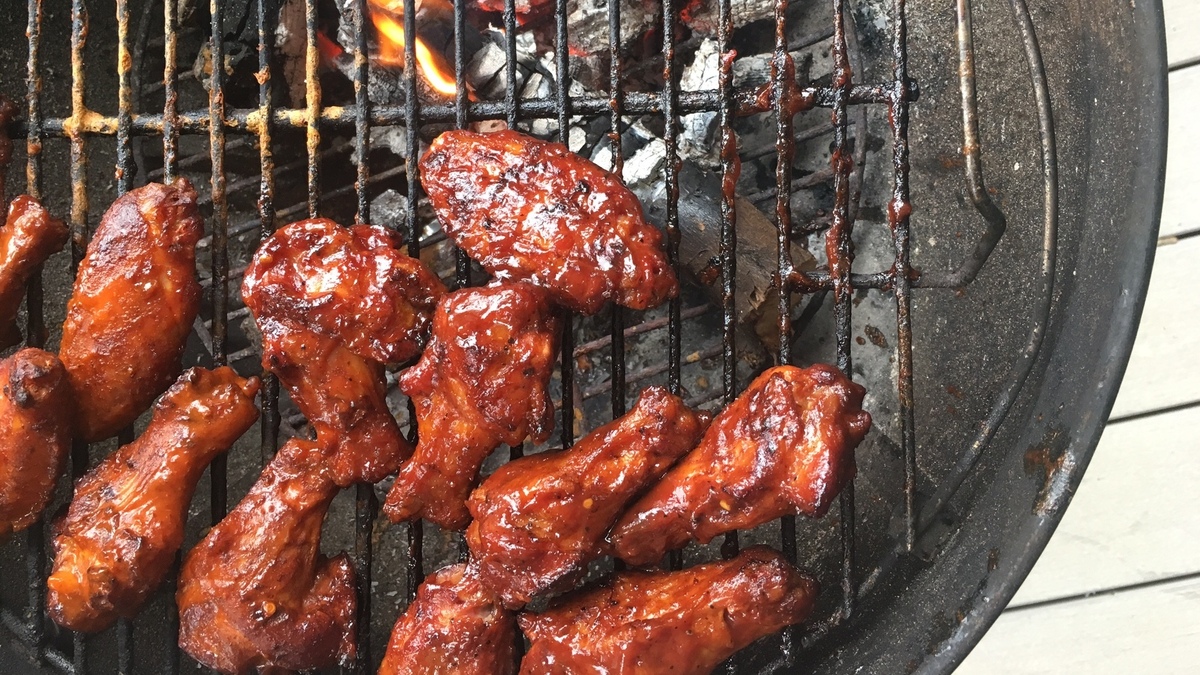 Mike and Amy Mills are a father-daughter team from southern Illinois.

Mike was trained as a dental technician. "I made false teeth — crowns, bridges, partials — this type of thing. It's what I did as a trade," he recalls. "Later on, I started barbecuing just for the fun of doing it."

And that's what made him famous.

Mike is 75 now. Along with a pen and glasses, he carries a meat thermometer in his shirt pocket. He doesn't like to brag, but he has won numerous international barbecue competitions. He is even in the Barbecue Hall of Fame in Kansas City, Mo. 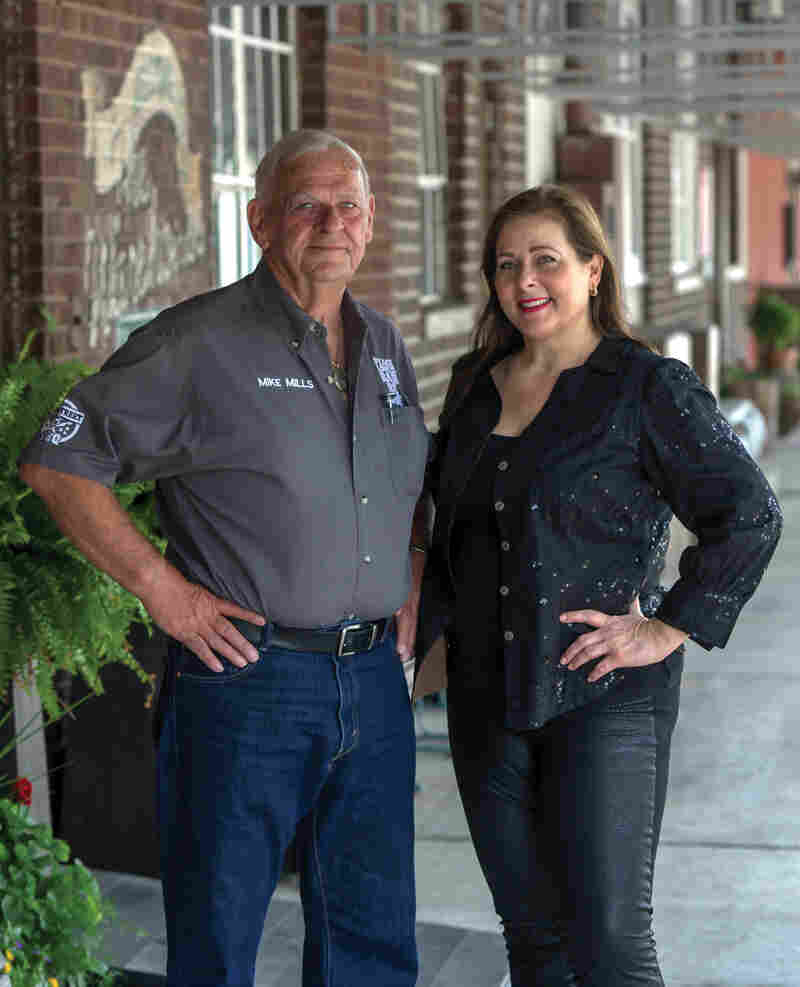 In short, the guy standing on my porch on a recent rainy day is a barbecue legend. With his daughter Amy, he runs a place in Murphysboro, Ill., called 17th Street Barbecue, where they spread "the gospel of barbecue," as Amy puts it. Hence the title of their new cookbook, Praise the Lard: Recipes and Revelations from a Legendary Life in Barbecue. It has simple recipes like pimento cheese and tangy coleslaw, as well as more ambitious projects — like instructions on how to select and prepare a whole hog.

We didn't get in that deep. I asked Mike and Amy to show us something people can make in their own backyards: smoked chicken wings finished on the grill. These barbecue evangelists preach that you don't need fancy equipment to make great meat.

To prove it, they set to work on a well-used and very basic Weber charcoal grill. For heat, Mike likes a natural lump charcoal — not charcoal briquettes.

"It's all-natural wood — it's not got chemicals and coal and other additives just to extend the wood product. It's 100 percent wood," he says.

He puts the charcoal lumps in a chimney and lights them. Once the coals are red hot, he dumps them onto the grill. "You want your coals to be nice and red and charred," he explains. 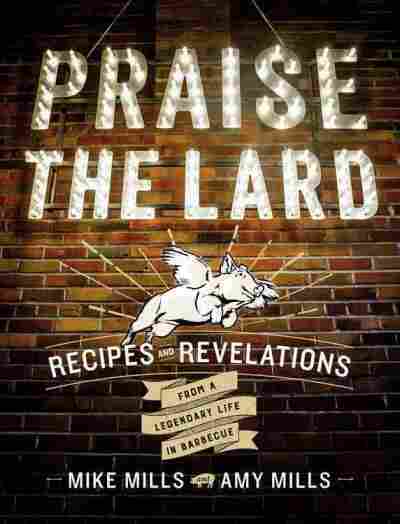 Recipes and Revelations from a Legendary Life in Barbecue

by Mike Mills and Amy Mills

Then, right on top of the glowing coals goes an almost magic ingredient: a branch of apple wood, which Mike and Amy brought with them from southern Illinois.

"Something a lot of people don't know: Trees have bark. Bark blackens your meat. Your apple wood has a skin. ... It's very thin," Mike says. So apple wood won't darken your meat, he says.

"So charcoal is the heat source," Amy adds, "and wood is the flavor."

As soon as the apple wood goes on, a sweet, smoky aroma fills the porch. "It smells like heaven," Mike says — and that's before there's even any meat on the grill.

The wings have already gotten a spice rub. They go on over indirect heat and should sit there for about an hour and a half undisturbed. They're not intensely cooking just yet, just slowly smoking.

That's one of the beauties of barbecuing, Mike says — it's "the great friendship maker," an excuse for people to get together with no hurry and just sit around and talk. "People aren't pushing and shoving; they know when it's ready there's going to be something good." 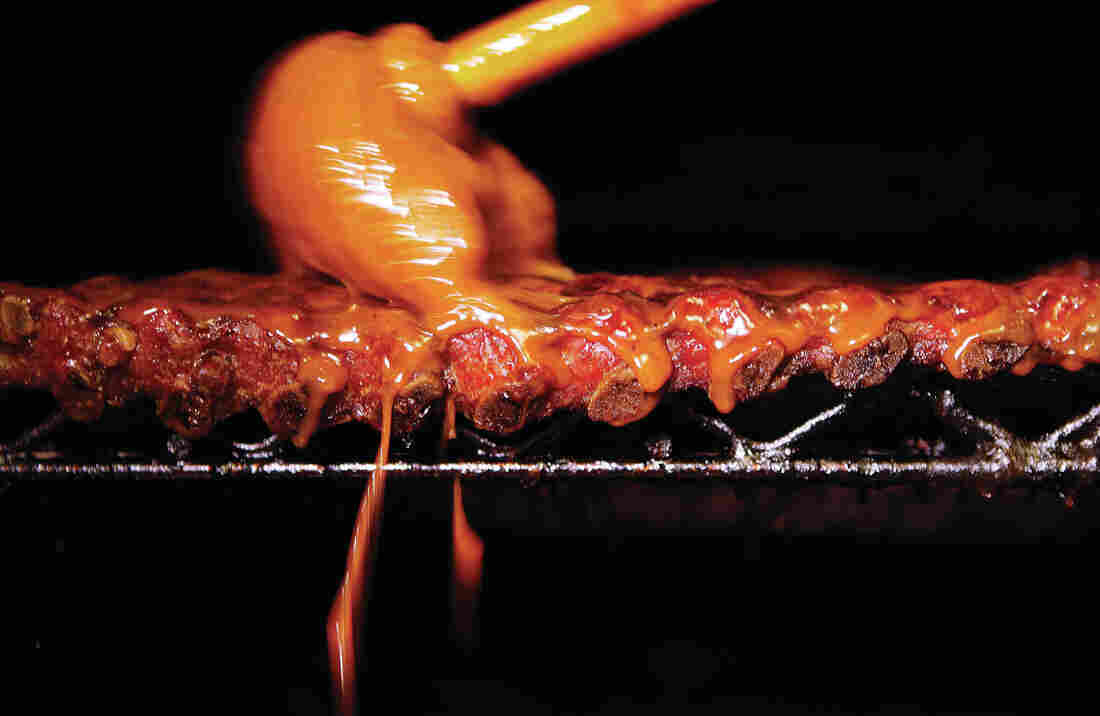 Ribs "mopped" with barbecue sauce on the grill. "We're not painting a house; we're fixing a meal. That's why we use a mop" instead of a brush, Mike explains. Courtesy of Ken Goodman/Rux Martin Books/Houghton Mifflin Harcourt hide caption 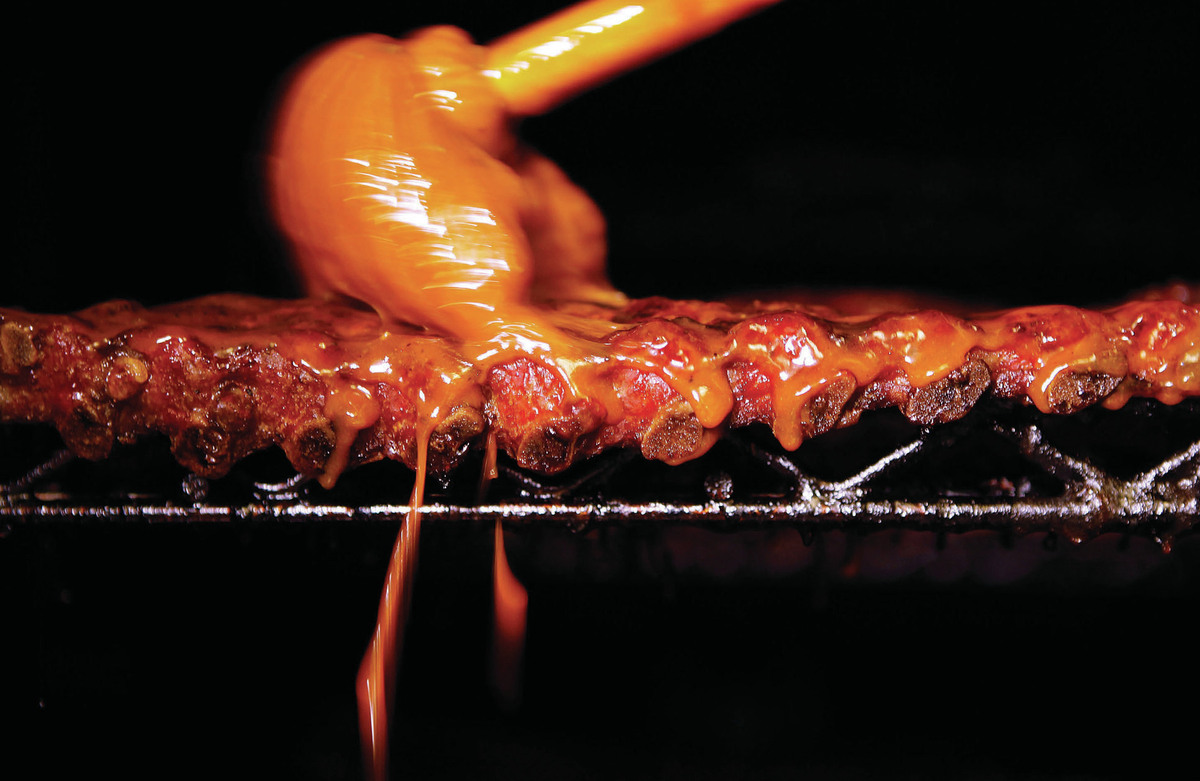 Ribs "mopped" with barbecue sauce on the grill. "We're not painting a house; we're fixing a meal. That's why we use a mop" instead of a brush, Mike explains.

Finally, we move on to the second step in these two-step wings: It's time to apply a couple of different house sauces — with a tiny little mop. "We're not painting a house; we're fixing a meal. That's why we use a mop" instead of a brush, Mike explains. At this point, he and Amy add more hot coals and sear the wings over direct heat.

The cookbook includes the family's recipe for barbecue sauce, which you'll find below.

You want to pull the wings off the grill when the internal temperature hits 165 degrees Fahrenheit, or when they look nice and charred but not blackened.

"You eat with your eyes, too," Mike notes. "In fact, that's the first thing you eat with is your eyes and your nose."

At this point, I need to recruit an impartial judge to help taste these wings, so I corral my next-door neighbor, Diane Swann. She has lived in this neighborhood for decades and she loves a good wing — hot, mild or in-between. Amy hands Diane a wingette. Her verdict?

"There are just so many layers of flavor here — garlic, salt, dry rub, smoke, chicken itself, and then the sauce," Amy says.

As Diane puts it with a chuckle, "Poor chicken don't stand a chance."

(Courtesy of Mike And Amy Mills)

3/4 cup ketchup (made with cane sugar, such as Red Gold or Hunt's)

Combine the ketchup, rice vinegar, apple cider juice, cider vinegar, brown sugar, Worcestershire sauce, mustard, granulated garlic, white pepper, cayenne and bacon bits in a large saucepan. Bring to a boil, stir in the apple, onion and green pepper, then lower the heat. Simmer the sauce, stirring often, for 10 to 15 minutes, until it thickens slightly. Decant into a Mason jar, cover and refrigerate. The sauce will keep for at least a month. Warm or bring to room temperature before serving.

Variation: To make this sauce a little hotter, add more cayenne pepper to taste, an additional 1/4 to 1/2 teaspoon. Be careful: A little goes a long way.

An earlier version of the recipe for Apple City Barbecue Sauce left out one ingredient: 1/4 cup apple cider vinegar. It's now listed.