Accessibility links
2 Scientists, 2 Different Approaches To Saving Bees From Poison Dust : The Salt Two scientists agree that pesticide-laden dust from planting equipment kills bees. But they're proposing different solutions, because they disagree about whether the pesticides are useful to farmers. 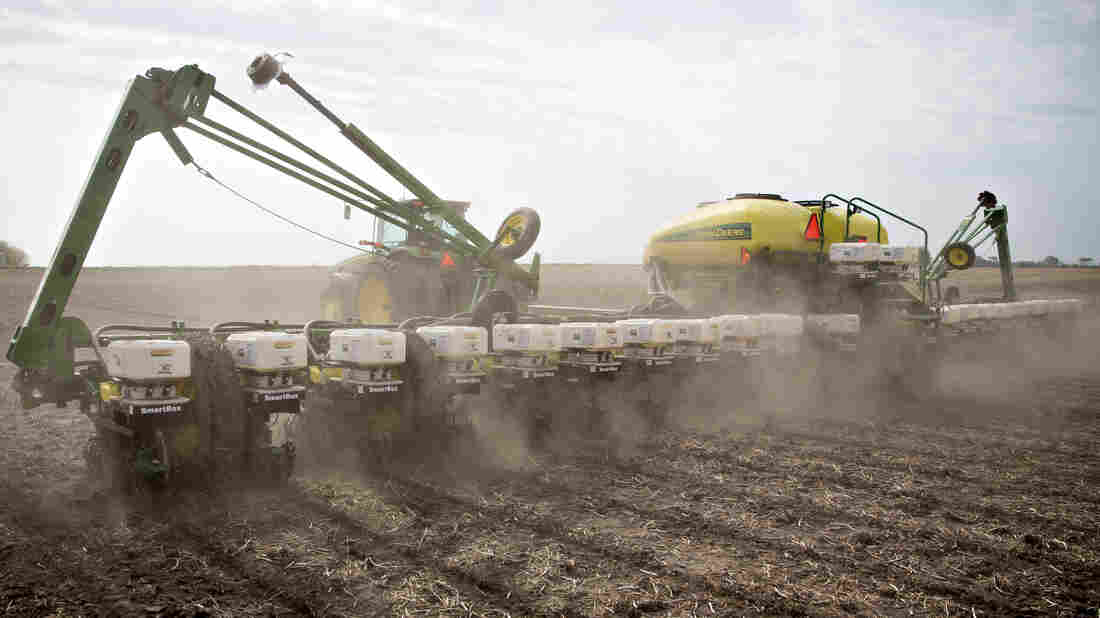 A tractor pulls a planter while distributing corn seed on a field in Malden, Ill. Two scientists agree that pesticide-laden dust from planting equipment kills bees. But they're proposing different solutions, because they disagree about whether the pesticides are useful to farmers. Bloomberg/Bloomberg via Getty Images hide caption 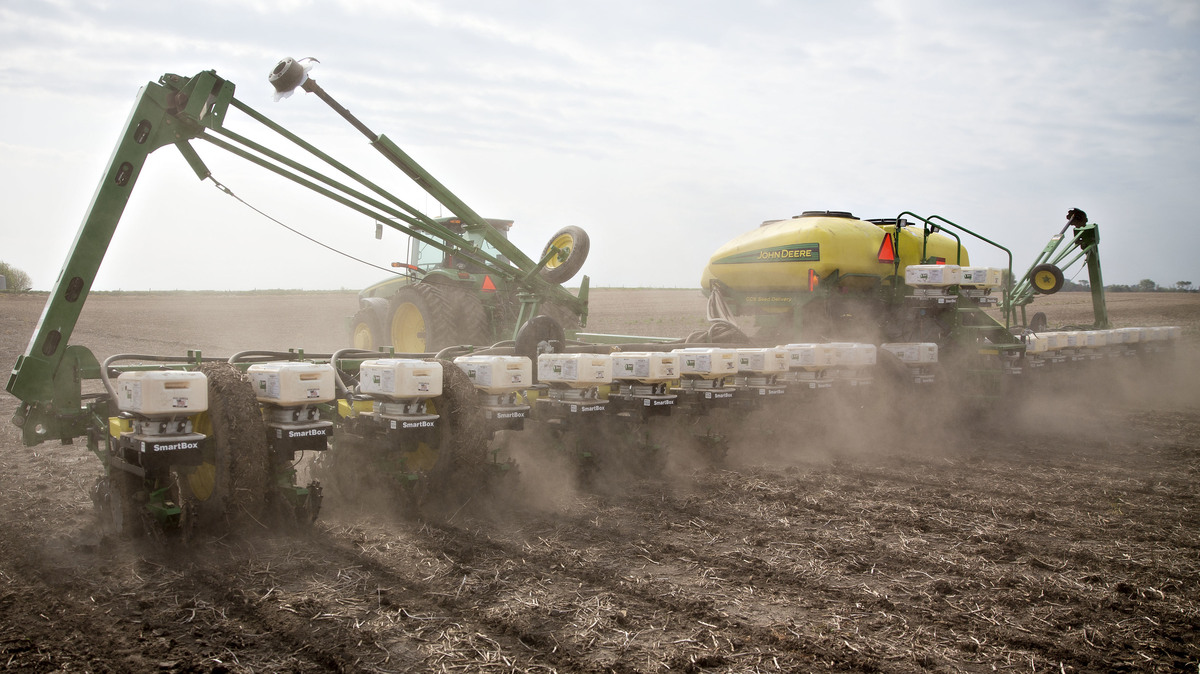 A tractor pulls a planter while distributing corn seed on a field in Malden, Ill. Two scientists agree that pesticide-laden dust from planting equipment kills bees. But they're proposing different solutions, because they disagree about whether the pesticides are useful to farmers.

It's planting time in America. Farmers are spending long days on their tractors, pulling massive planters across millions of acres of farmland, dropping corn and soybean seeds into the ground.

Most of those seeds have been coated with pesticides known as neonicotinoids, or neonics for short. And despite attempts by pesticide makers to reduce this, some of that coating is getting rubbed off the seeds and blown into the air. That dust is settling on the ground, on ponds, and on vegetation nearby.

Honeybees and wild bees, looking for food, will encounter traces of the pesticides, and some will be harmed. They may become disoriented and bring less food back to their colony. Many may die.

Several years ago, Christian Krupke, an insect specialist at Purdue University in Indiana, became one of the first researchers to discover that rogue dust was wiping out bee colonies. At first, Art Schaafsma, an entomologist at the University of Guelph, in Canada, didn't believe it was true.

"Unfortunately — myself included — in the early days there was a lot of skepticism," Schaafsma says. He regrets that reaction now. "We do have a problem, and we've got to fix it," he tells me.

There are a lot of things that Krupke and Schaafsma disagree about when it comes to neonicotinoids. Krupke believes — while Schaafsma does not — that bees may also be harmed by exposure to smaller quantities of neonicotinoids that show up in the leaves and pollen of plants grown from coated seeds, or even in wildflowers that grow in or near fields where the crops are planted.

They do agree that the dust is a problem. They just have different ideas about how to fix it.

Schaafsma's solution is sitting in a garage on the Ridgetown Campus of the University of Guelph. It's a shiny new piece of farm equipment, a seed planter that Schaafsma has taken apart and re-engineered.

Like most modern planters, it uses air pressure to move the seeds from a storage bin through tubes and into the soil. Schaafsma points to the end of one pipe. "This is the air intake, OK? See the problem already?

That pipe is close to the ground. When a tractor pulls this planter across a field, dust will get sucked into this opening, along with air. Inside the planting mechanism, "the air is rushing past that seed, it's laden with dirt, and it's acting like a sandblaster," Schaafsma says. That dirt grinds a little bit of the neonicotinoid coating from the seed, and then carries the pesticide dust with it as it exhausts from the planter, straight up into the air.

That's normally how the planter works. But Schaafsma has made some changes on this one, outfitting it with special dust traps, similar to high-quality vacuum cleaner filters. "We're probably filtering 99 percent of what comes out of the exhaust," he says.

Schaafsma thinks that this equipment, if installed on all seed planters, would eliminate most of the risk to bees from neonicotinoid-treated seeds.

Schaafsma has been testing his theory by setting up honeybee hives near corn fields that were planted using his filter-outfitted equipment, monitoring these hives and measuring their honey production. "We just want to demonstrate that it can be done — that bees and corn can co-exist," he says.

Schaafsma wants co-existence because he wants farmers to be able to use neonicotinoid-treated seed. "I see them as valuable tools, which should be handled with care," he says.

This, however, is where Schaafsma and Christian Krupke part ways. Krupke is not convinced that farmers are getting much benefit — if any — from the seed coatings. In most cases, Krupke says, the pesticides don't appear to be worth the money that farmers are spending.

So his solution is even simpler: Stop using them so much. At the very least, he says, seed companies should give farmers the option of planting seeds without neonicotinoids on them. Right now, it's often difficult to find such untreated seeds.

This month, Krupke and some colleagues published two scientific papers with evidence to support his case. The first study, conducted by researchers at seven Midwestern universities, concluded that neonicotinoid-treated soybean seeds performed no better than untreated seeds in fending off aphids, one of the major pests that the seed treatments are supposed to control. According to the study, farmers would be better off leaving their seeds untreated, monitoring their fields, and resorting to conventional spraying of pesticides when the aphids attacked.

In another study, Krupke found that the seed treatments weren't of much benefit to corn yields, either. In some fields, pesticide-treated seed performed better, in other fields it did worse. Combining the results from all the sites, the average yield from the treated seed was about 2 percent higher, but Krupke says that difference is not statistically or economically significant — certainly not the kind of clear effect that would justify its use on nearly all the corn in the country.

Companies that sell seeds and neonicotinoid pesticides have attacked similar studies in the past, arguing that farmers clearly do see benefits from the seed treatments, because they're happy to pay for them. Other researchers, including Schaafsma, have reported that treated seed has produced higher yields, with the increase ranging from 1.5 to 5 percent.

Krupke says he'd like to do more extensive studies comparing treated and untreated seed, but companies that control the seed now are refusing to provide samples for him to use.

Krupke says that there's growing interest among farmers in plant seeds that are not treated with neonicotinoids — if only they could find such seeds.

Schaafsma, for his part, thinks it will be easier to stop dust pollution from seed planters than to convince farmers not to use pesticide-coated seeds. This is something that farmers clearly would like to do, he says, and it's technically feasible. Bayer CropScience, the big chemical company that sells most of the neonic seed coatings, has developed its own version of a dust trap that could be installed on planters.

The problem is, none of the big farm-equipment companies are offering the dust traps for sale. These companies that make planting equipment, such as Case, Kinze, and John Deere, have installed shields that direct the neonic-laden exhaust down toward the ground, rather than into the air, but Schaafsma says that's not good enough.

"The only people who don't recognize [the problem] well enough yet are the equipment manufacturers," he says.