Accessibility links
Seeds Of Change: Mini Gardens Help Drive The Growth Of Food At Home : The Salt Container kits, designed for urban living and planted with recipes already in mind, are appealing to people who are interested in home cooking, food-sourcing and the environment. 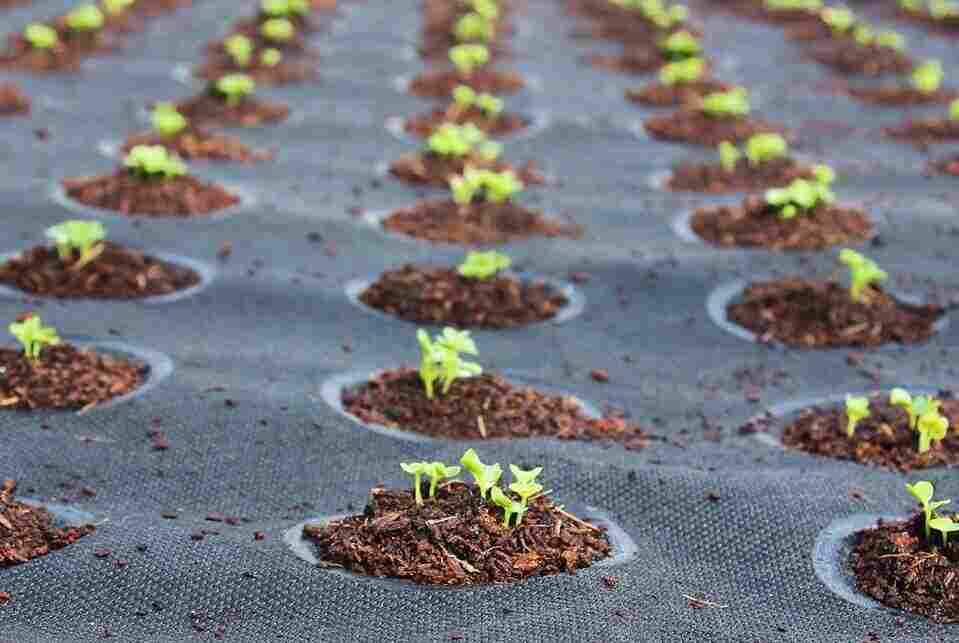 Seedsheets are made of weed-blocking fabric, a thick layer of soil and dissolvable pods full of organic seeds. Courtesy of Seedsheet hide caption 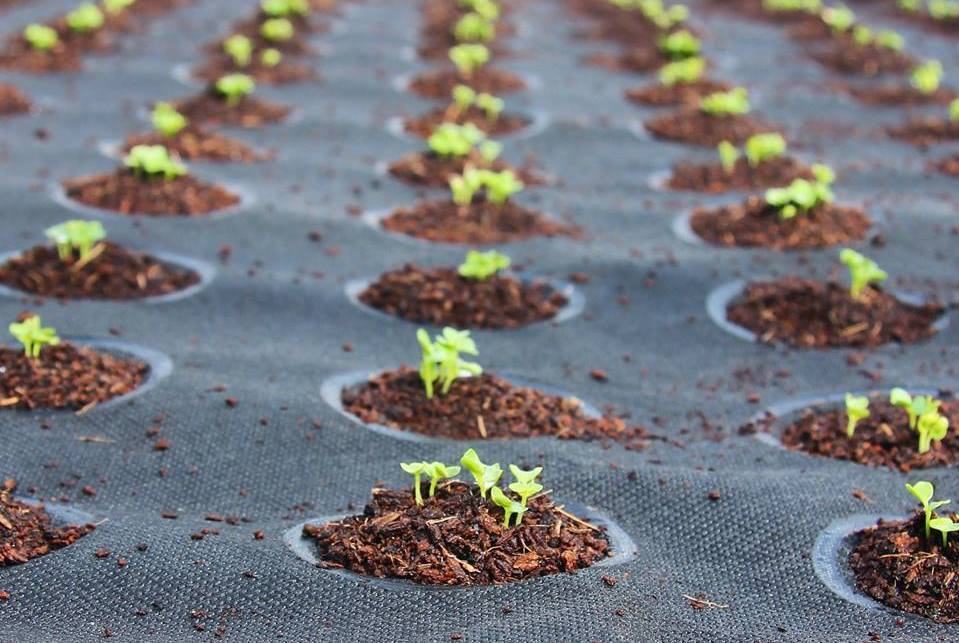 Seedsheets are made of weed-blocking fabric, a thick layer of soil and dissolvable pods full of organic seeds.

The short, but intense, growing season in Vermont might be a drawback for some, but for native son Cam MacKugler, it has turned out to be the key to developing his container garden kit startup, Seedsheet.

"Up here in Vermont," says MacKugler, "we don't have a lot of time to grow our food, so the goal is to get as much as you can as quickly as possible."

A house-sitting stint on a co-worker's farm in 2012 is what inspired MacKugler, an architect working in sustainable design in Middlebury, a small town in western Vermont. "I was paid with access to the backyard garden," he says, "and I was looking at the companion planting [an agricultural system for maximizing space and crop productivity] and how well it was designed — the arrangement of tomatoes and basil and zucchini. The idea for Seedsheet almost immediately came to me."

Sketching out the concept with crayons that were handy in the farmhouse, MacKugler was intrigued by the idea of foolproof gardening that would appeal to people living in cities with little or no outdoor space, but who still wanted the experience of harvesting their own crops. 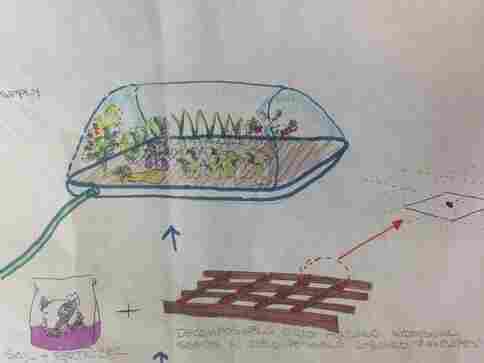 When MacKugler first came up with the concept of Seedsheet, he sketched out the concept with crayons that were handy in the farmhouse where he was inspired by the garden. Courtesy of Seedsheet hide caption

As MacKugler says, "We're kind of the Blue Apron of agriculture. It's not meal delivery, it's farm delivery."

A 2017 gardening industry survey produced by GardenResearch.com shows that 1 in 3 U.S. households now produces something edible at home, whether it's a pot of herbs on the windowsill or a raised-bed kitchen garden. In fact, consumer interest in growing food has translated to a $1 billion increase in sales in just five years, surpassing sales for flower gardening.

It's that all-important 18- to 34-year-old demographic — millennials — who are driving much of that growth, says Michelle Simakis, editor of Garden Center Magazine.

"Some millennials did not grow up gardening with their parents, so they aren't necessarily gardening as a hobby or to beautify their homes like previous generations did," says Simakis. "They are planting vegetables and fruit because they want to know where their food comes from and are interested in cooking with produce that's better than what they can find in stores."

As a millennial himself, MacKugler's instinct for the Seedsheet concept is all about making that "Green Acres" dream come true, but within the confines of modern urban living. His instincts are proving correct: 100 percent of Seedsheet customers live in cities, from Washington, D.C., to San Francisco.

"Most people here in Vermont think we're crazy, but that's because they've been raised as gardeners and don't see the need for this kind of product," he says.

His original concept involved spacing different types of seeds within two layers of dissolvable film, which were placed on top of soil and then watered. MacKugler had it tested by friends and family, who liked the basic idea — except for the weeds that sprouted alongside the seedlings, making it difficult to know what needed to be plucked. A new design using a 12-inch circle of recyclable weed-blocking fabric dotted with four or eight dissolvable pods filled with organic seeds and a thin layer of soil solved the weed problem.

"Companies in the lawn and garden industry are aware they need to provide products that guarantee ease and success for first-time gardeners," says Paul Cohen, research director of gardenresearch.com. Noting that he'd seen MacKugler demonstrating his product on a recent episode of the budding-entrepreneur reality TV show Shark Tank, Cohen says, "I expect to see a lot more of these types of products in the future."

MacKugler is particularly mindful of making first-time gardeners feel successful. "Our main goal is to choose varieties that will grow really quickly. We're figuring out which plants can grow together and reach maturity around the same time so people can coordinate cooking meals around the harvest."

MacKugler and his team focus on fast-growing varietals like Glacier tomatoes, while Ruby Streaks mustard greens and Valentine's Day radishes can be ready to eat in about a month. 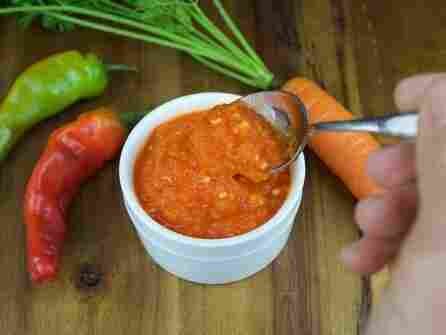 "You can grow a lot of food in a small amount of space," asserts MacKugler. "People will say, 'You can't grow tomatoes in a bucket,' but it's actually very easy."

Indeed, besides MacKugler's kits, Simakis notes there are already a variety of other options popping up in the small garden marketplace. Both IKEA and Miracle-Gro offer countertop units, while would-be gardeners with a little more space can opt for LED-powered, indoor hydroponic growing kits. But she also sees that the millennial interest in growing food may be tied to loftier goals.

"Making gardening easy is important, but I think more companies are starting to promote the importance of gardening to help the environment, and generally speaking, the millennial generation is drawn to causes," she says.

For MacKugler, his own interest in sustainable design and supporting the local community means sourcing organic seeds and relying on the expertise of an important segment of the nearby population: farmers.

Because Vermont's farmers are typically out of work during the winter and early spring until planting season starts, they are becoming the biggest asset for his young company, where everything from custom machinery to seed assembly procedures needs to be built from the ground up. And with up to 600 kits being made per hour, MacKugler says, "We're selling more kits now than we actually have people in our town."

Curating seeds specifically for recipes has also been an important focus for MacKugler, highlighting another millennial trend: home cooking. A recent survey by online grocer Peapod shows that millennials are now twice as likely to cook at home than baby boomers, but they are more in need of inspiration than older, more experienced cooks. The "Hot Sauce Seedsheet" is one recipe-based kit designed to feed that need, with four seed varieties that grow together in a standard 12-inch pot: the Ring-O-Fire Cayenne Pepper, Dragon Red Carrot, Napoli Carrot and Purple Bunching Onions. The kit comes with recipes for spicy carrot juice and, of course, hot sauce.

"Our goal is to cultivate an understanding of how gardening works," says MacKugler. "Everyone should be able to call themselves a gardener, no matter where they live."