Accessibility links
How New Roots Are Driving An Apple Renaissance : The Salt The apple renaissance of recent years has given us new varieties of fruit. But that's only half of the story, and half of the tree. Another revolution is happening below ground, in the tree roots.

How New Roots Are Driving An Apple Renaissance

How New Roots Are Driving An Apple Renaissance 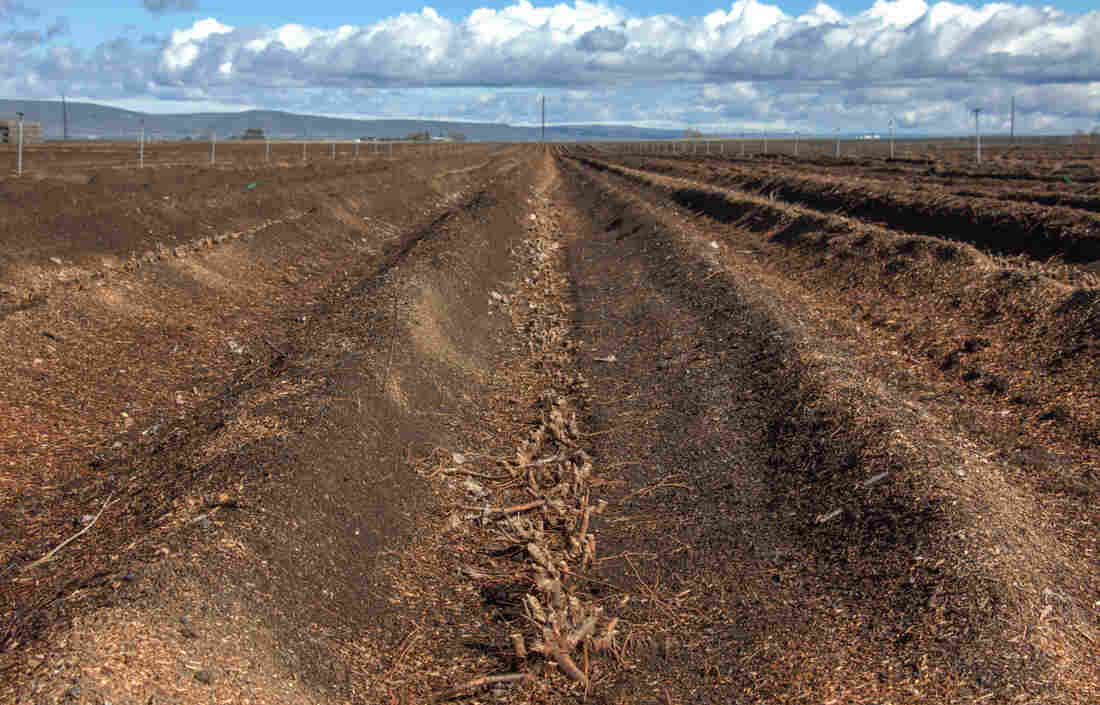 A bed of apple roots at Willow Drive Nursery, in Ephrata, Wash. These roots are a vital part of the apple industry. Dan Charles/NPR hide caption 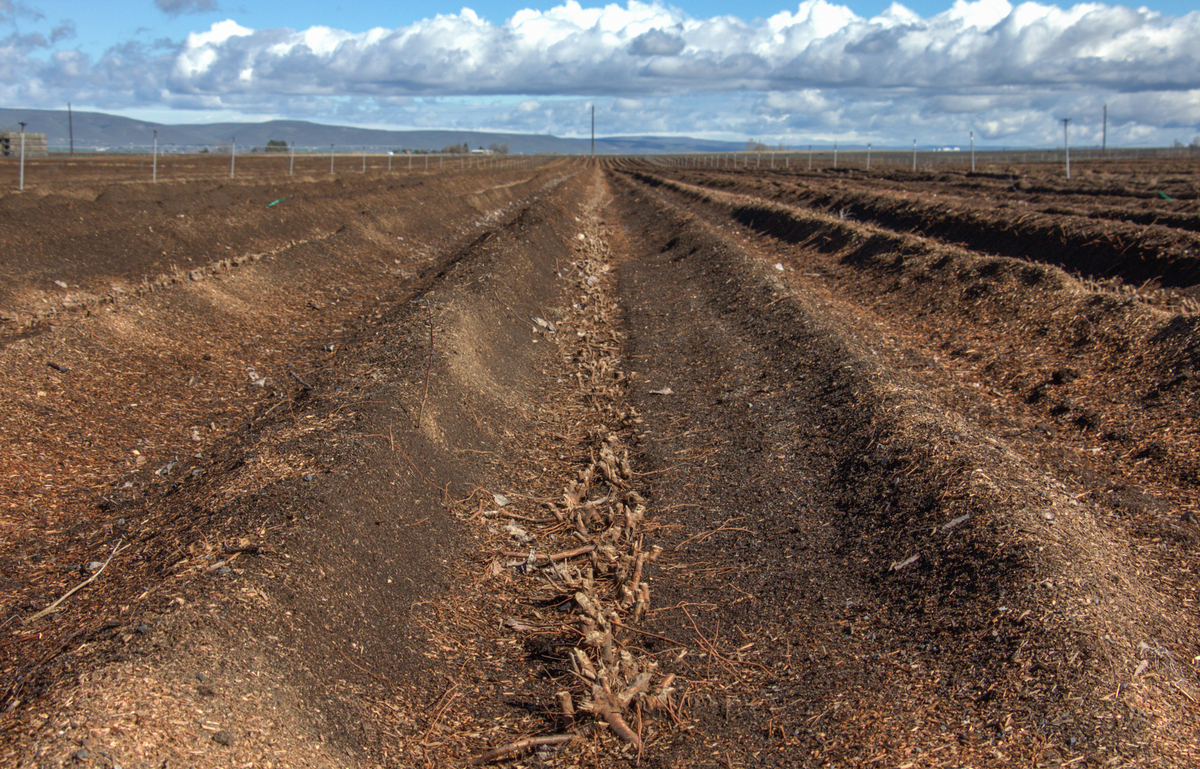 A bed of apple roots at Willow Drive Nursery, in Ephrata, Wash. These roots are a vital part of the apple industry.

"That's the old industry," Tom Auvil tells me, nodding toward an apple orchard that we're driving past. We're near Wenatchee, Wash., which calls itself the Apple Capital of the World. Auvil grew up in the apple business, and until recently, he was a horticulturist for the Washington Tree Fruit Research Commission.

The trees do look old, but that's not what Auvil is getting at. He's talking about their size and shape. They're large and round, far enough apart to let their branches spread. In the fall, workers will have to climb ladders to pick their fruit. 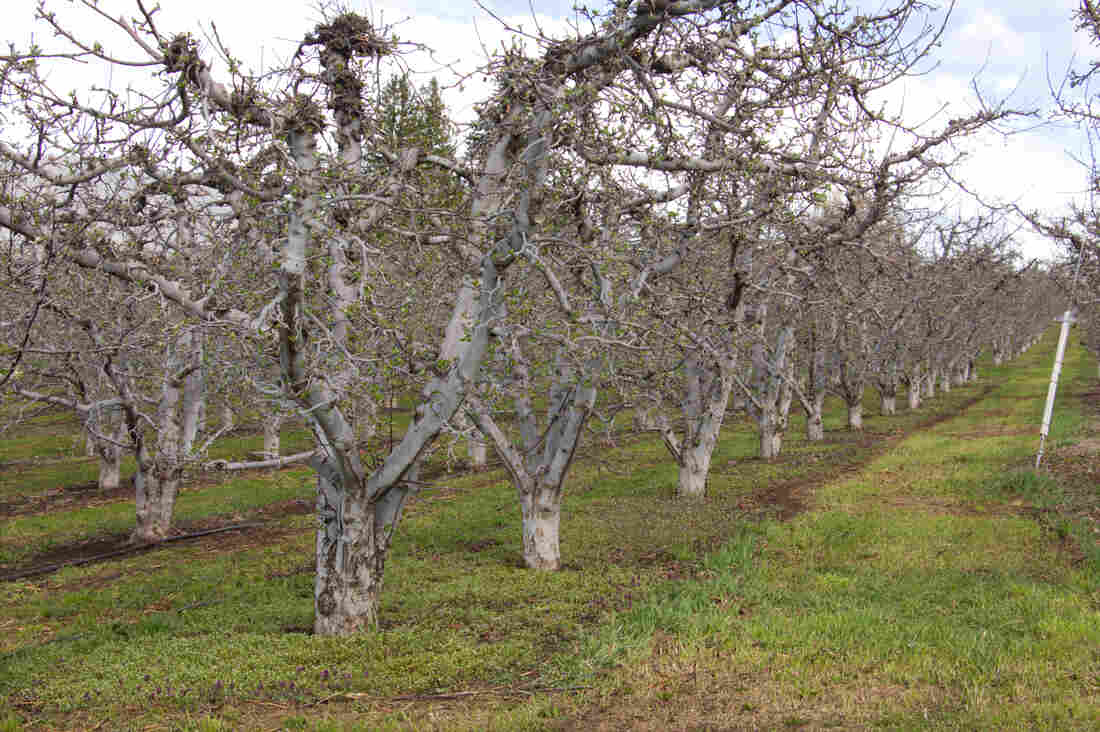 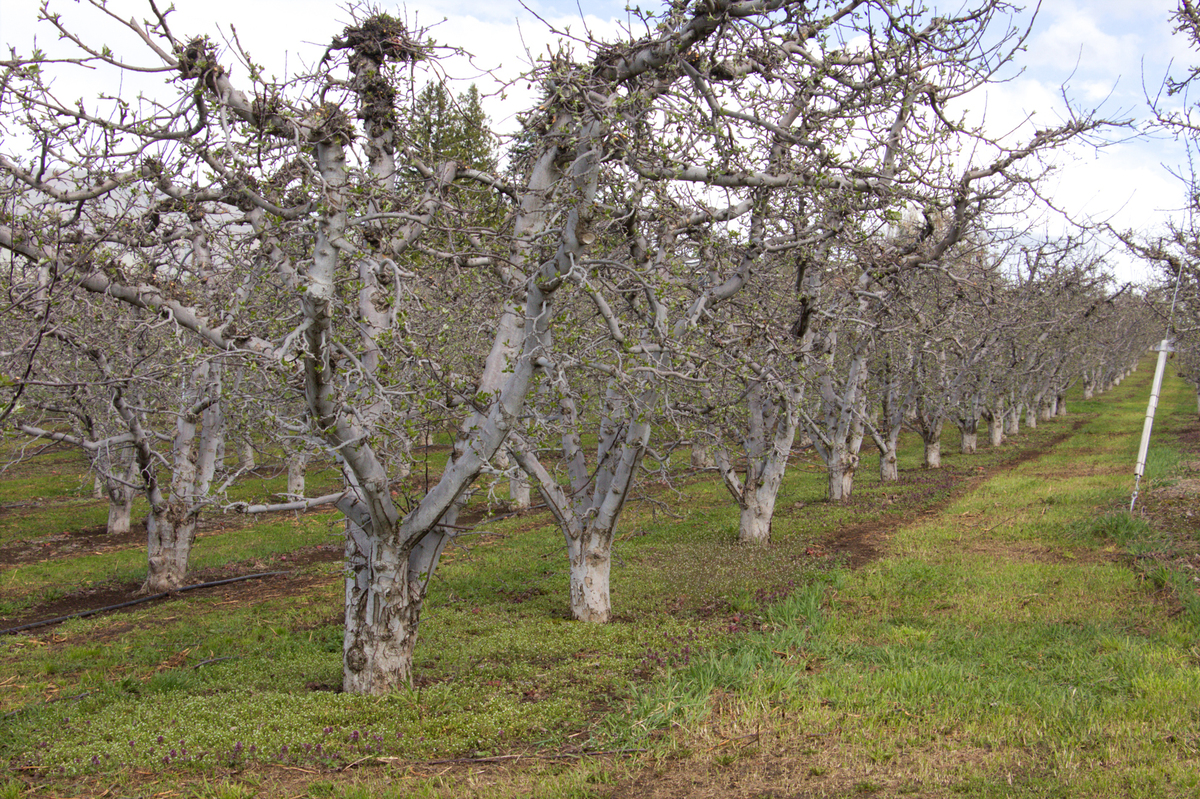 But here is what the new apple industry looks like. This orchard looks more like a vineyard. 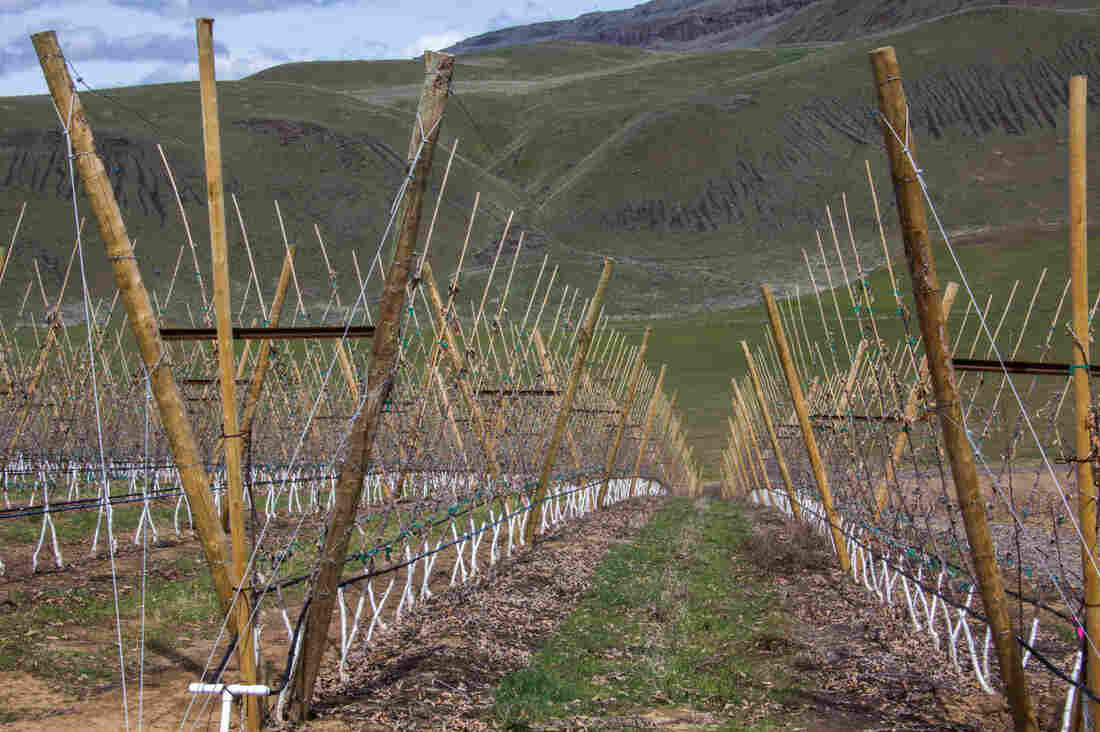 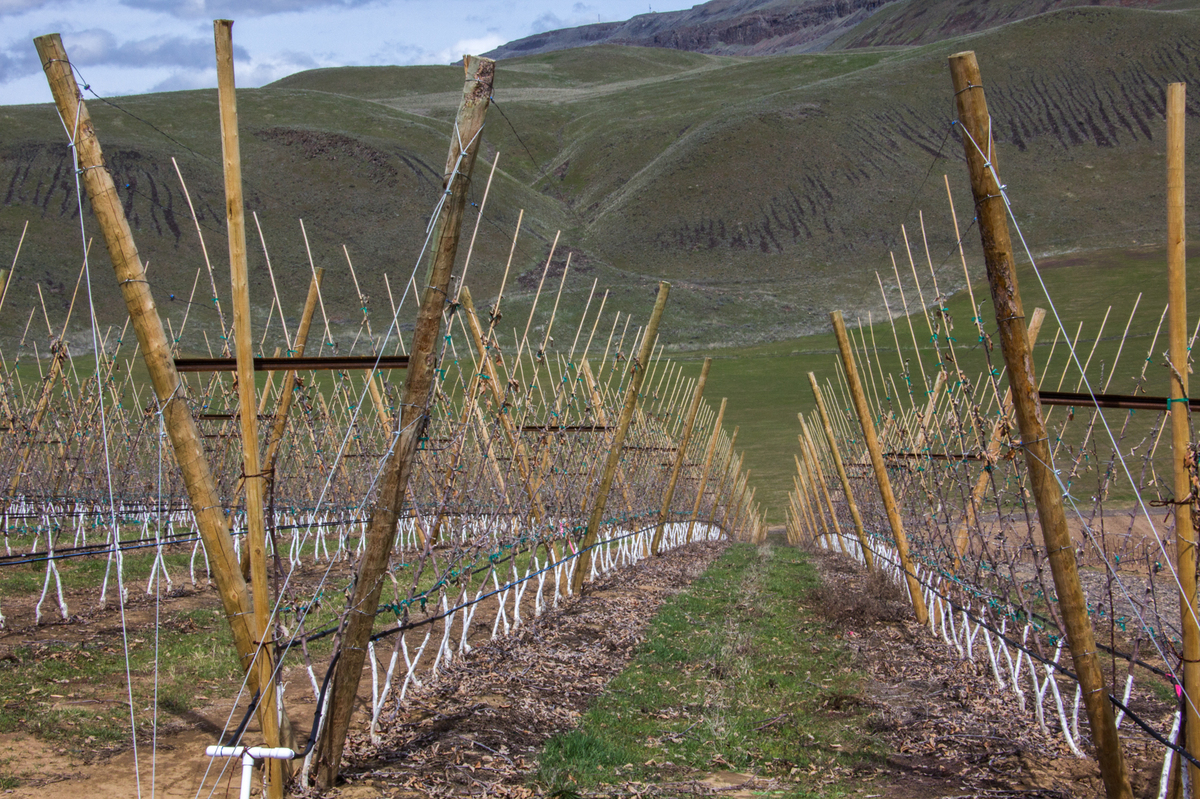 These trees are young, so they're tiny. But they'll never get very big. They're packed closely together, thousands of them on a single acre. Each tree is supported by poles or wires. Workers can harvest the apples while standing on platforms that roll slowly past the row of trees.

The source of this transformation is something that we can't even see: the roots.

Commercial apple trees, you see, don't grow from seeds. They're spliced together from two different sources. To create a new Honeycrisp or Fuji tree, you have to cut a small branch, or just a bud, from a parent tree of that variety. This branch needs roots to survive and grow, so you have to graft that branch onto the root from some other apple tree. 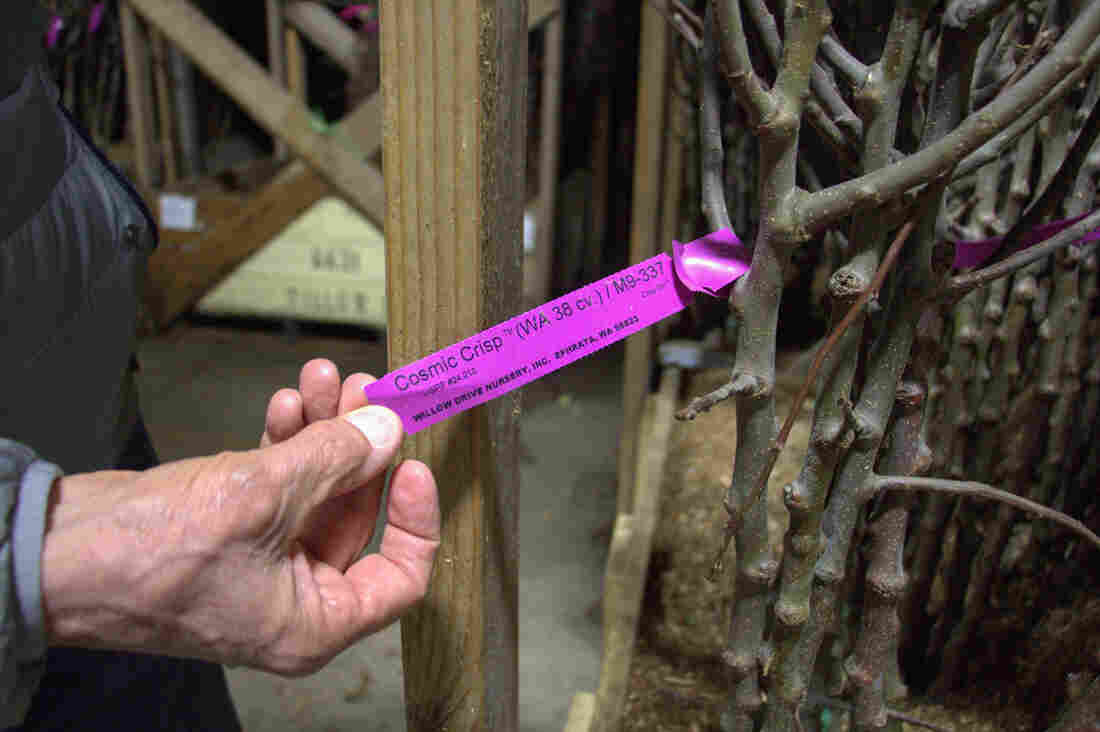 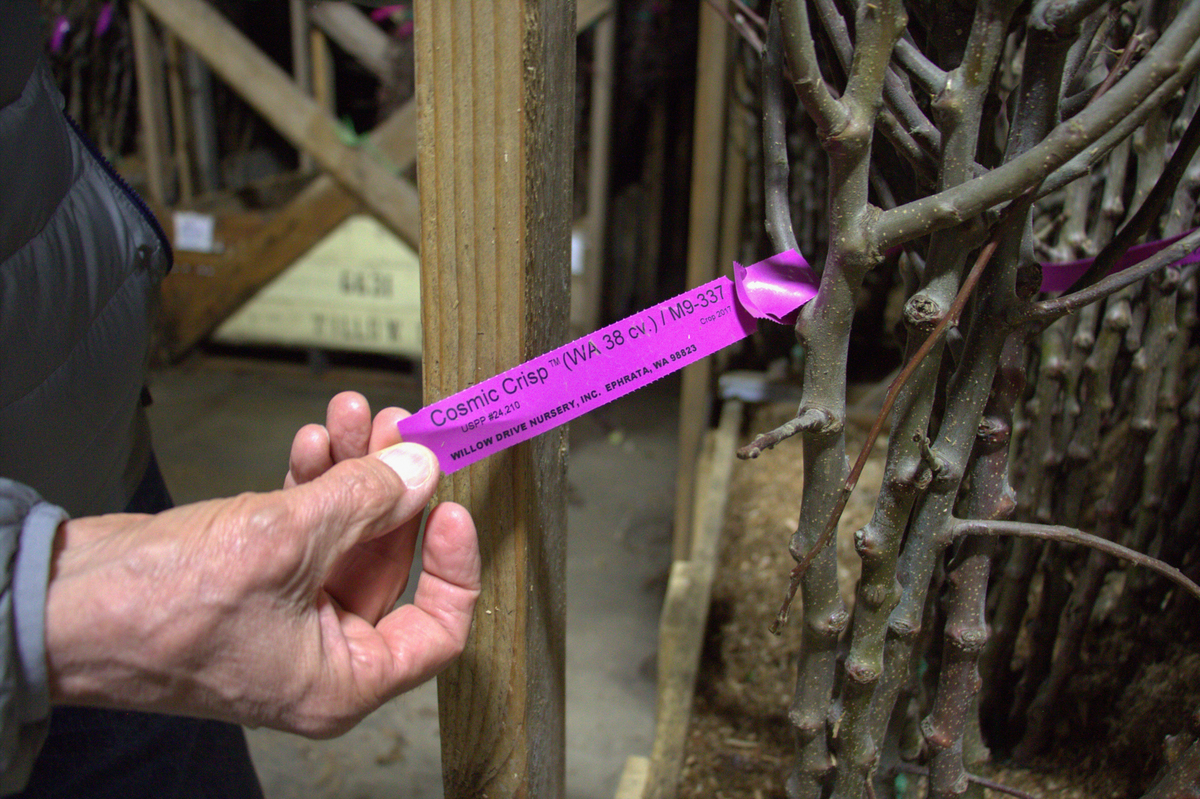 In the old days, most tree nurseries in the United States didn't really care what roots they used. They'd just grow seedlings from random apple seeds and use them as their "rootstock."

Seedling roots were genetically diverse, which meant that each tree in the orchard was slightly different from its neighbor, and the apple grower had to prune each one with individual care. "It took an artistic eye to figure out how to grow a tree large enough and in a productive enough form," says Auvil.

The trees in new-style orchards, though, are grafted onto the roots of "dwarf" trees. And that rootstock revolution "was a massive switch," says Kate Evans, who manages apple breeding at Washington State University. ""That dwarfing rootstock enabled this more intensive production system that we have. As we move forward, it means that we can move into having orchards where our fruit is much more uniform, we're not having problems of managing a big three-dimensional canopy, we can move forward with mechanization, we can lose ladders, which are dangerous."

In Washington, dwarfing rootstocks transformed the state's apple industry, starting in the 1970s. 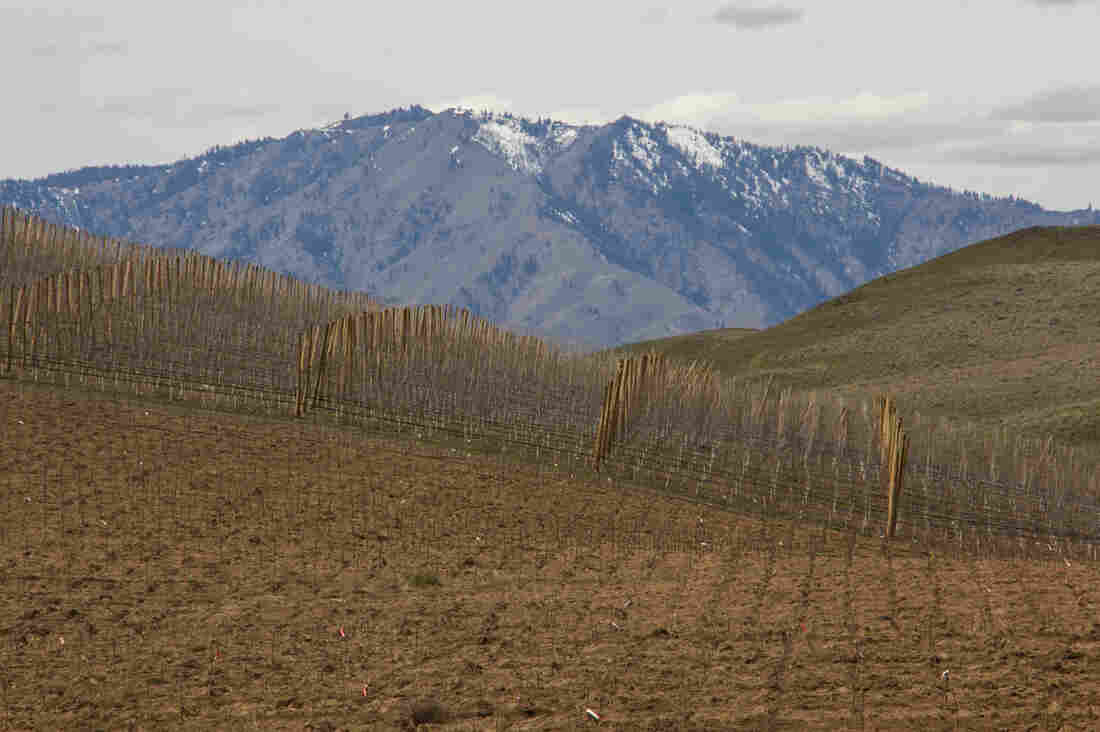 A modern orchard near Wenatchee, Wash. The trees in the foreground have just been planted. In the background, an orchard of young trees. Dan Charles/NPR hide caption 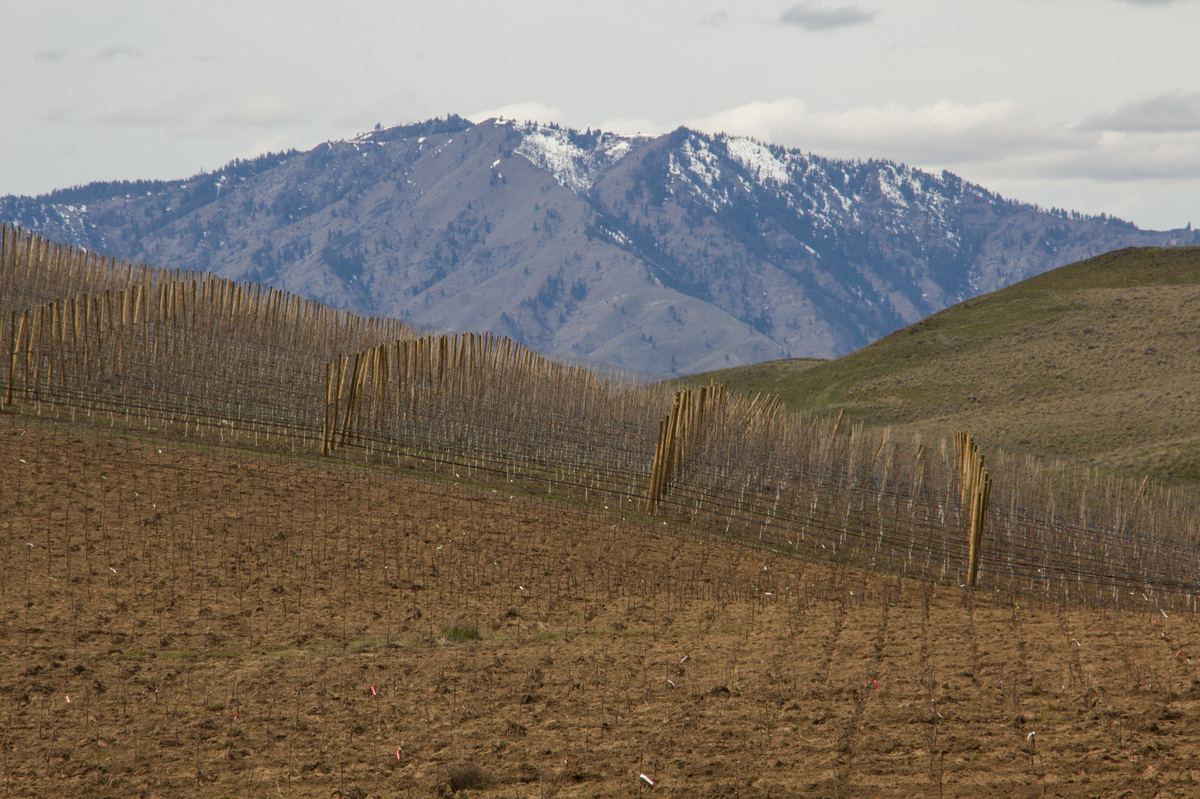 A modern orchard near Wenatchee, Wash. The trees in the foreground have just been planted. In the background, an orchard of young trees.

Now a second wave in that rootstock revolution is underway. Because the first wave was built on a startling vulnerability.

It was based on just a handful of dwarfing rootstocks, known as "Malling" rootstocks because they were selected at a research center in East Malling, England. In fact, for decades, a single type of dwarfing roots dominated the industry — that one called M.9, or Malling 9. "Up to 2013, M.9 was the global standard for dwarf rootstock production around the world," says Auvil.

This meant that any weakness in Malling 9, any vulnerability to disease, made much of the world's apple production vulnerable as well. And M.9 did have vulnerabilities — to a disease called fire blight, for instance, as well as to diseases caused by soil fungi.

A few foresighted apple breeders at Cornell University and the U.S. Department of Agriculture's research station in Geneva, N.Y., came riding to the rescue. In the 1970s, two of them, James Cummins and Herbert Aldwinckle, started looking for other, hardier, dwarf trees that also could serve as rootstocks. They tested seedlings that were grown from the seeds of wild apple trees that collectors brought back from the apple's ancestral homeland of central Asia.

"They basically tried to kill every seedling," says Auvil. "They would flood these trays of seedlings with a cocktail of fungal diseases to see if they could kill them with root rots. And then they'd take the survivors and inoculate them with fire blight."

It took decades, and the researchers who started this effort have since retired, but a USDA plant breeder named Gennaro Fazio has carried on their work. In recent years, he has tested and released a series of new dwarfing rootstocks, known as the Geneva rootstocks.

These Geneva rootstocks have become the first choice for apple growers planting new orchards — especially when they're replanting, putting new trees into the same land where apple trees previously grew, because that soil usually is full of fungi that attack apple roots.

Geneva rootstocks are in short supply, though. Nurseries have to multiply their supply of them by cutting pieces of the roots and replanting them, just as they have to take cuttings of Honeycrisp branches in order to create new trees. It's a slow, laborious process.

But it's the future — and the present, as shown by this tag on a newly planted tree near Wenatchee. The roots of this tree, named G.41, are from Geneva. 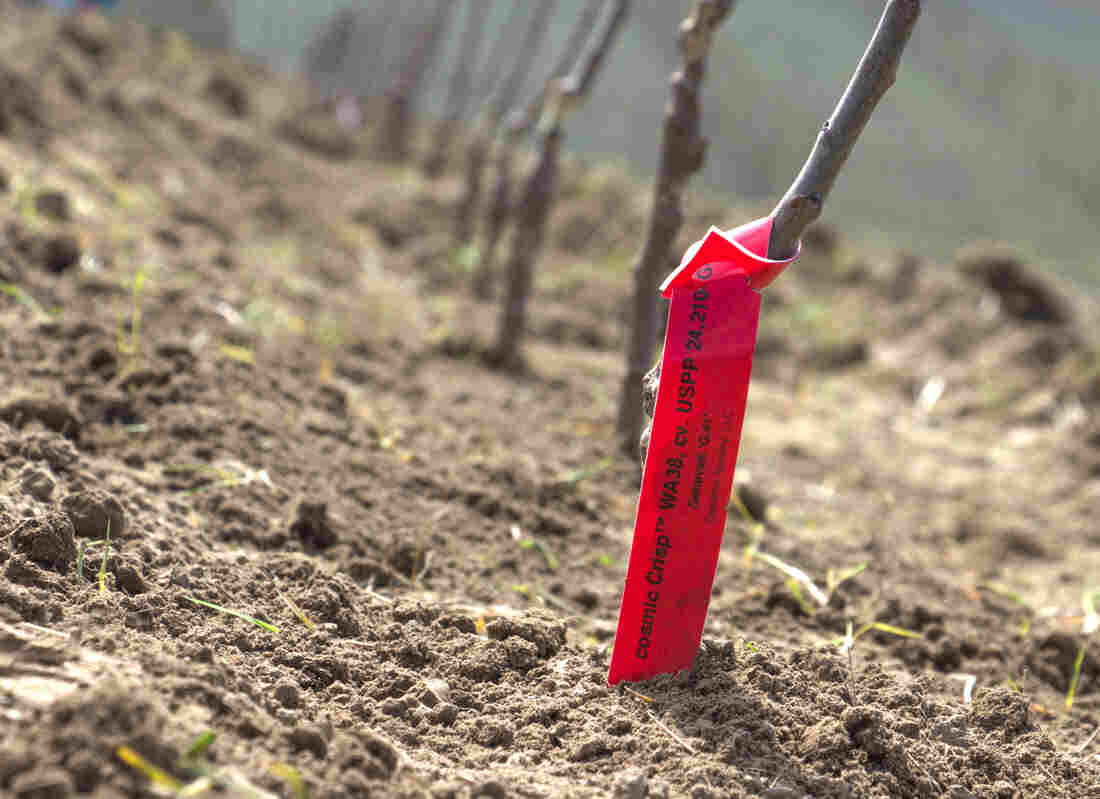 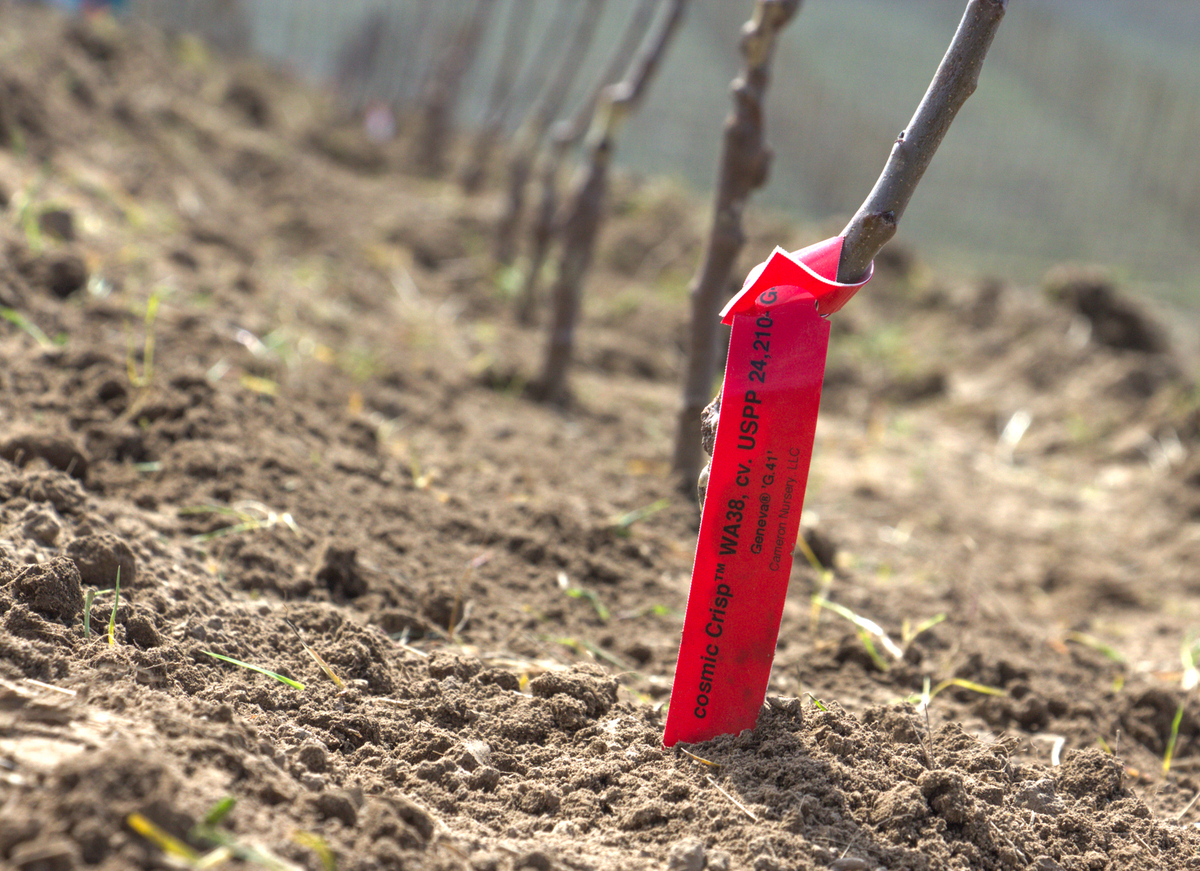