Accessibility links
Want More Traditional Chinese Fare? Panda Express Says: Give Us A Try : The Salt The fast-food chain is often knocked for its Americanized spin on Chinese food. But as American palates expand, it wants to keep up by offering more traditional Chinese recipes ... to an extent. 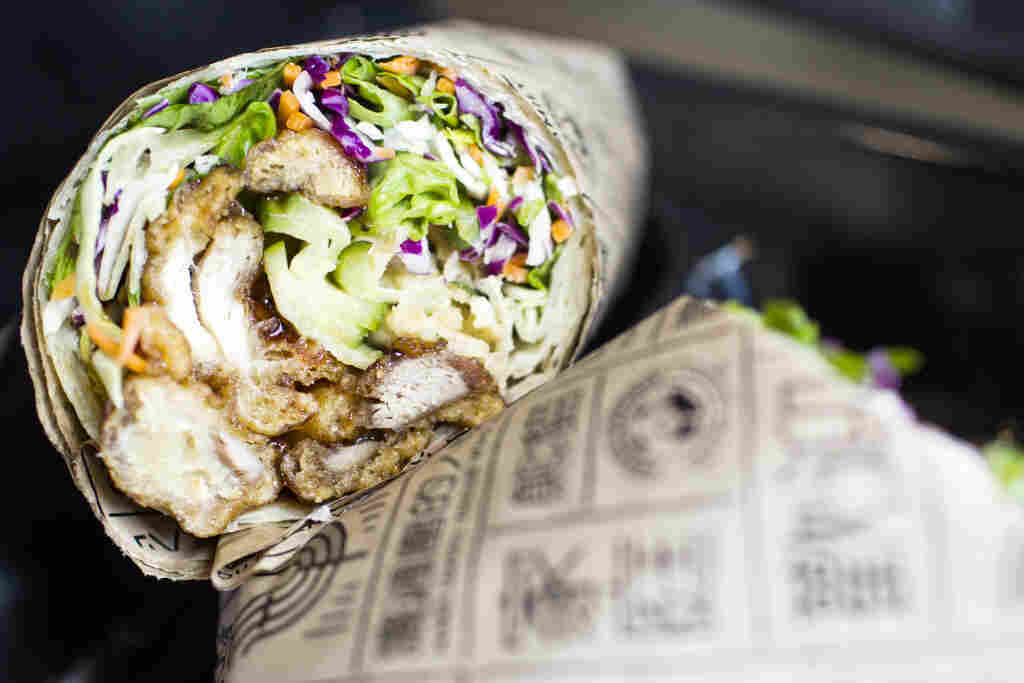 One traditional Chinese dish that Panda Express altered and is now trying out in certain Southern California outlets: cōng yóu bing, also known as a scallion pancake. Less traditional is how the chain envisions diners eating it — like a wrap or a burrito, stuffed with orange chicken or other entrees. Maya Sugarman/KPCC hide caption 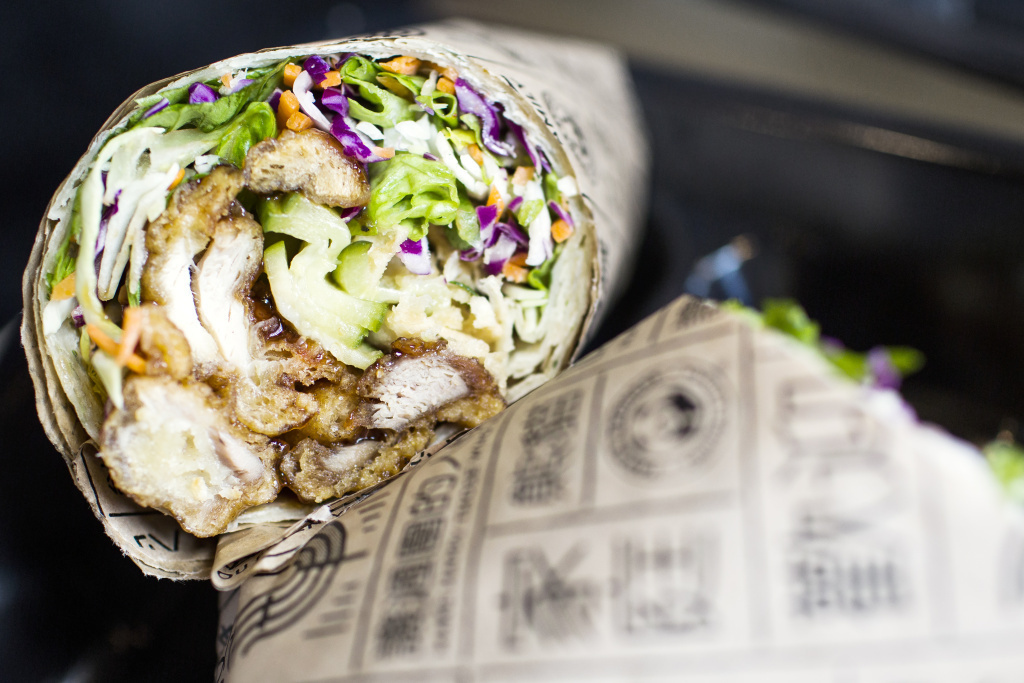 One traditional Chinese dish that Panda Express altered and is now trying out in certain Southern California outlets: cōng yóu bing, also known as a scallion pancake. Less traditional is how the chain envisions diners eating it — like a wrap or a burrito, stuffed with orange chicken or other entrees.

While many Americans are familiar with dishes like egg foo young, there are Chinese-American and Chinese immigrant communities throughout the country where foods like ma po tofu and congee are also on menus.

And Panda Express, America's biggest Chinese fast-food chain, hopes to make those more traditional dishes mainstream. "Panda Express ... has the opportunity to be the ambassador of Chinese food to many people," says Andrea Cherng, the company's chief marketing officer.

Chern's parents opened Panda Express in 1983, at a time when Chinese food was still seen as "exotic." It's now America's biggest Chinese fast-food chain, with more than 1,900 locations around the world.

But as Americans have become more curious, adventurous eaters, the challenge for the chain is to keep up with the changing food culture — while still seeming familiar enough not to alienate those many mall and airport diners who come to the chain for its Americanized spin on Chinese food.

"Our job at Panda Express is to follow that journey of how palates have grown," Cherng says.

A history of adaptation for American palates

Over the years, critics have often knocked Panda Express for serving up "mediocre" Chinese food that you wouldn't actually find on a menu in China. (Buzzfeed went so far as to create a video called "Chinese People Try Panda Express for the First Time.") But the story of Chinese food in America has always been one of adaptation.

"It still takes time for many Americans to like Chinese food," says historian Haiming Liu, author of "From Canton Restaurant to Panda Express: A History of Chinese Food in the United States. "It's a historical problem for Chinese food, and Chinese restaurants have to do something about it."

As Liu explains, Chinese food didn't start to become popular in the U.S. until the 20th century. Before that, hundreds of thousands of Chinese laborers who landed on the West Coast in the mid 19th century — to help build railroads, farm and mine — were met with deep racism.

Many non-Chinese were suspicious of the newcomers and saw them as competition for jobs. Those racist, nativist attitudes extended to cuisine: Prejudiced Americans complained of the stench of Chinatown's kitchens, and editorials asked whether "Chinese eat rats?"

Liu says anti-Chinese fervor on the West Coast prompted some Chinese to head East. And that's why, "in the 1900s, Chinese restaurants started to grow really fast in places like New York City," says Liu. (As The Salt has reported, a loophole in immigration law also played a big role in the Chinese restaurant boom of the 1910s.)

In New York, Chinese immigrants found diners that were more open-minded — as long as the recipes were adapted for American palates, Liu says.

Americans didn't care for the strong, pungent flavors of ingredients that might have been used in traditional Chinese cooking such as bitter melon, black mushrooms or mustard greens. So chefs adapted.

"In American-style Chinese food, the vegetables used tend to be crunchy but flavorless – broccoli, carrots, celery, bean sprouts," says Jennifer 8. Lee, whose documentary, The Search for General Tso, traces the roots and myths of the popular American Chinese chicken dish. "Chop suey, for example, is based on a familiar dish, but it's not something you see Chinese people eat. It became this food that completely catered to Western tastes."

American-Chinese cuisine got an additional profile boost in the 1960s, when the U.S. overhauled immigration laws that had previously kept may Asians out. A flood of new immigrants were able to come from different regions of China, like the Sichuan and Hunan provinces, and they brought their regional cuisines with them, Liu says.

Those newcomers also tended to be more affluent than their predecessors, and that made an impression on non-Chinese Americans, says Liu. "Americans realized that Chinese people can be rich and wealthy," he says, "and their food could be good, accordingly." (Indeed, the way immigrant cuisines are valued in America has often reflected the way those immigrants themselves are seen.) But those immigrants who opened restaurants still adapted and softened their dishes so they would be welcomed by their new country.

That's a tradition that Panda Express — which was born in California's San Gabriel Valley, home to a large Chinese-American population — followed as it expanded throughout America.

Searching for the next orange chicken hit

"There is this bridge that we are making from our Chinese heritage to a wider American audience," says Cherng. "How do we introduce the flavors that we experience around the San Gabriel Valley to the mainstream?"

Take the chain's single most popular dish, orange chicken. It makes up a third of its sales, but it's not a traditional Chinese recipe: Developed in the 1980s, the dish actually sprung from a blend of cuisines that Panda Express' then-head chef had tasted, both in China's Sichuan province and in Hawaii.

Though orange chicken is often derided as "inauthentic," Cherng believes the dish honors the food of her family because it evolved to suit its surroundings, just as her own immigrant parents did when they first moved to America in the mid-1960s.

So she and her team have been looking to the cuisine her friends and family grew up on to discover the next orange chicken-like hit.

Helping her on that quest is Jimmy Wang, who works as Panda Express' "innovation chef. He's developing recipes that are familiar enough to Americans, but also familiar to Chinese people trying an Americanized version of a classic dish.

"We want to make sure that whatever we change isn't a sacrifice, but an enhancement," he says. "We don't want to be so focused on the history of it that we forget that we need to make a delicious dish at the end of the day."

For example, in developing Panda Express' recipe for Pacific Chili Shrimp, Wang needed to find an alternative for the fermented, nutty flavor of Chinese black vinegar that's traditionally used. "A lot of times, customers would say that it tasted weird," he says.

So he swapped in distilled, white vinegar. And instead of adding heat from the fermented chili paste, he used crushed chilis. "It's warm and less abrasive," says Wang, "and it's something that customers have had before."

Changing those ingredients may get the dish away from its origins, but it's a modification that makes it accessible to more diners, says Wang. "If there's history tied to something that we know of, then that's good start," Wang says. 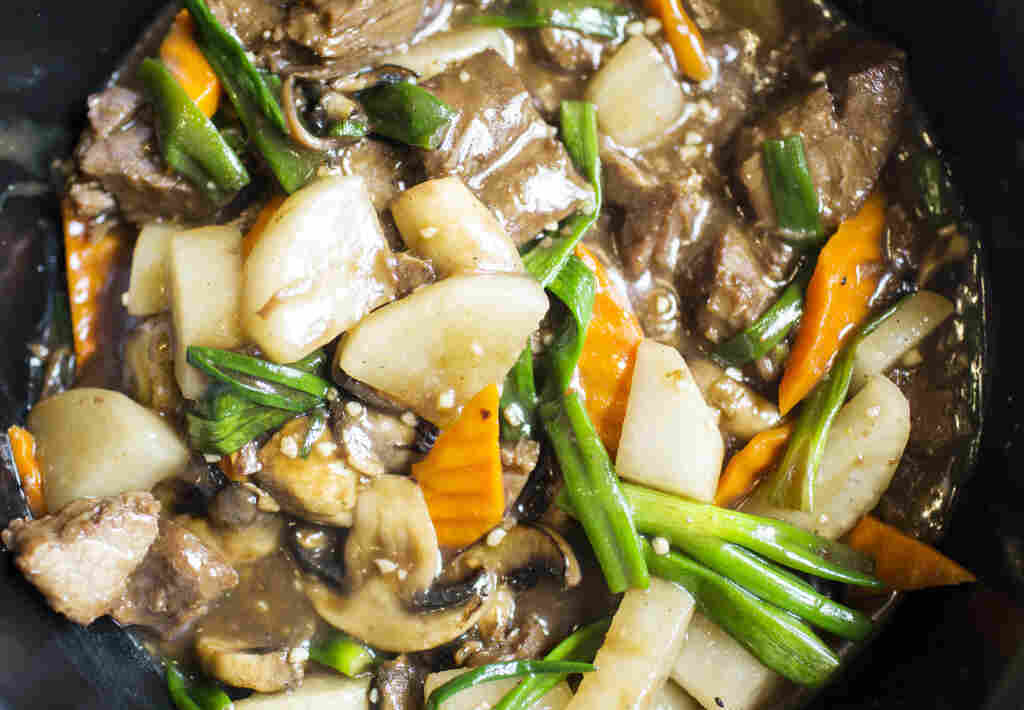 One of the new dishes being tested at the Panda Express Innovation Kitchen in Pasadena, Calif., is this beef brisket stew. It was inspired by a dish of braised beef that chef Jimmy Wang's mother and grandmother used to make for him when he was growing up in Taiwan. Maya Sugarman/KPCC hide caption 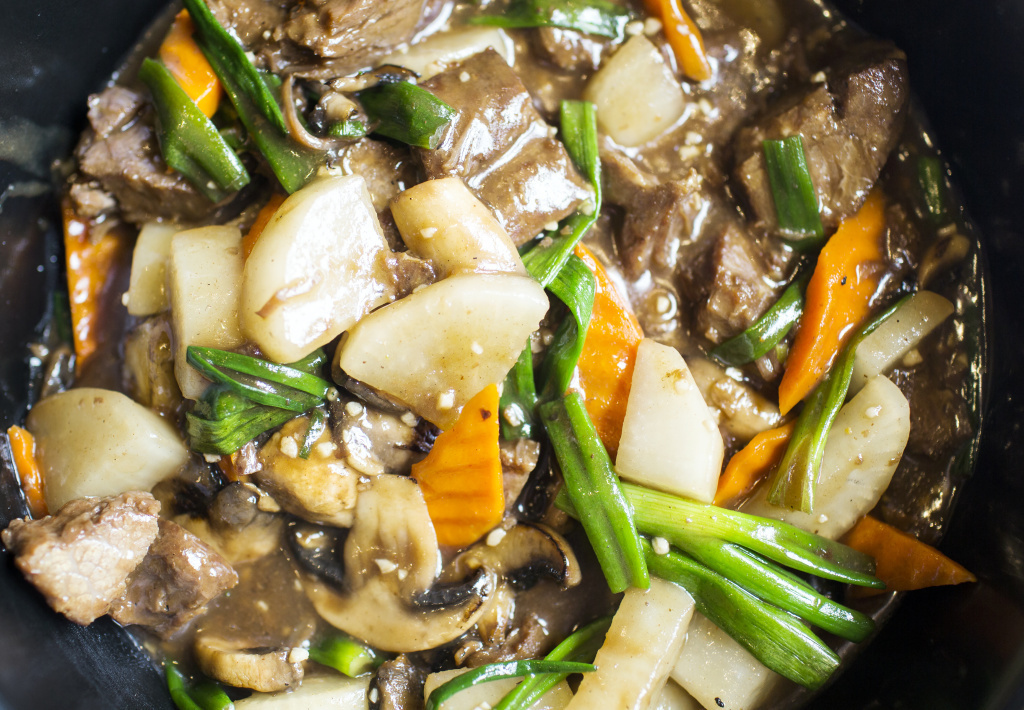 One of the new dishes being tested at the Panda Express Innovation Kitchen in Pasadena, Calif., is this beef brisket stew. It was inspired by a dish of braised beef that chef Jimmy Wang's mother and grandmother used to make for him when he was growing up in Taiwan.

One traditional dish that the chain altered and is now trying out in certain Southern California outlets: cōng yóu bing, also known as a scallion pancake. Less traditional is how Cherng envisions diners eating it — like a wrap or a burrito, stuffed with orange chicken or other entrees.

Cherng and chef Wang are testing out lots of other recipes, too, like a beef brisket stew inspired by hóng shāo niú ròu, a dish of braised beef that Wang's mother and grandmother used to make for him when he was growing up in Taiwan.

"The best that American Chinese food can bring to bear is taking parts of the past – the flavors that we know – and bringing it forward in original ways," says Cherng.