Accessibility links
This Art Group Installs Pick-Your-Own-Fruit Parks Around Los Angeles : The Salt Since 2004, the group Fallen Fruit has been planting fruit trees around the city and across the U.S. Once mature, the trees produce hundreds of pounds of produce a year — all free to the public. 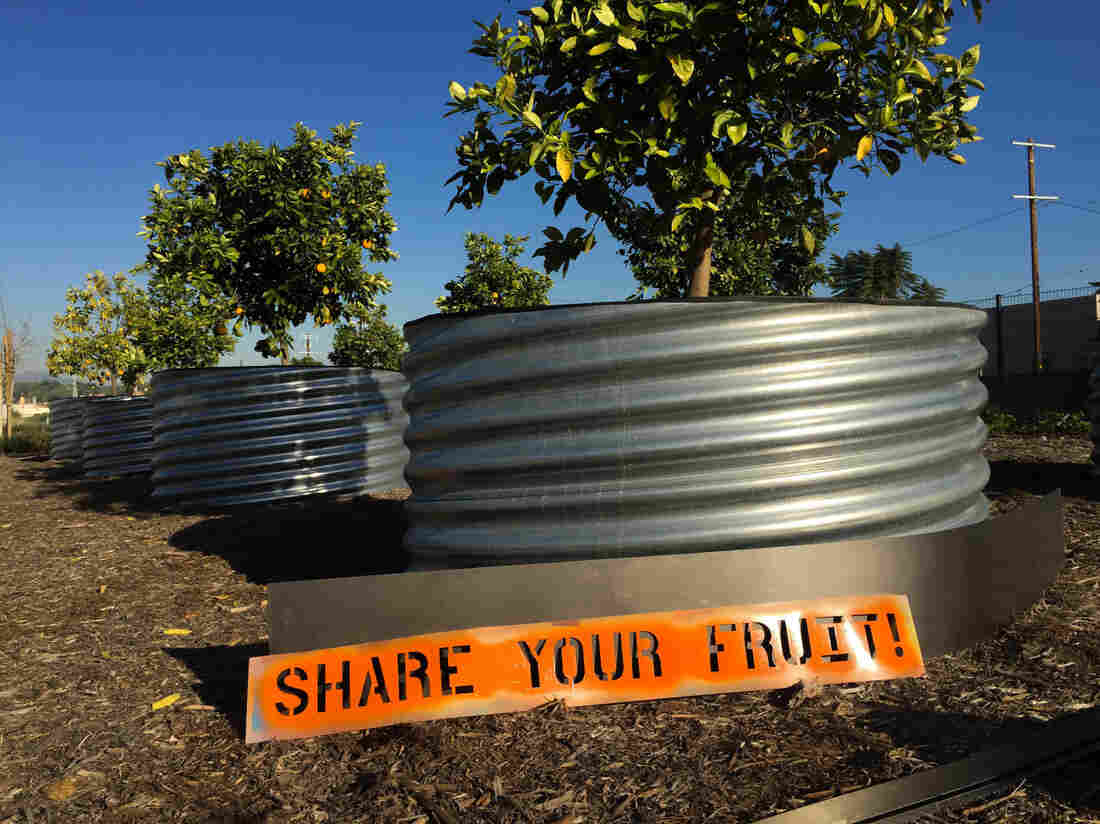 One of Fallen Fruit's public art installations — a fruit tree in a planter at the Los Angeles State Historic Park. Courtesy of Fallen Fruit hide caption 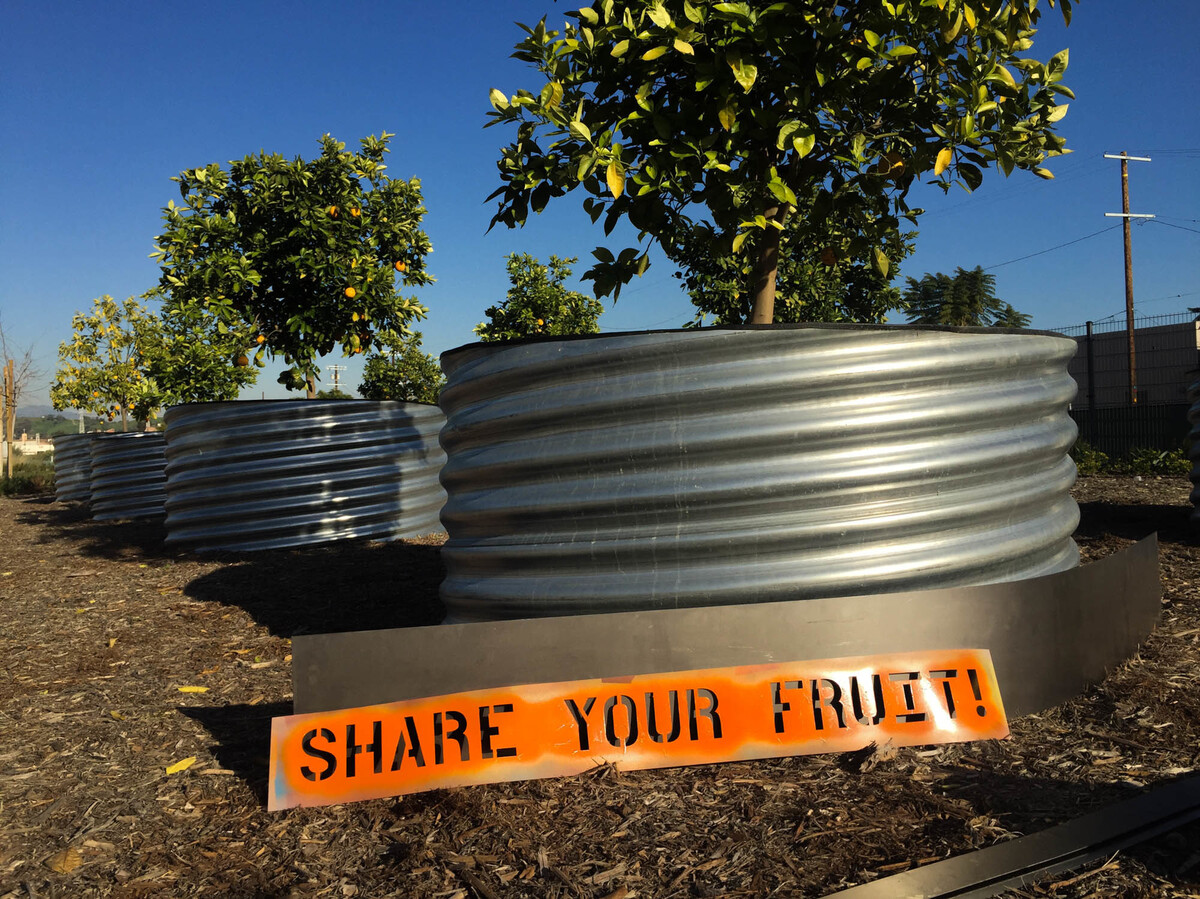 One of Fallen Fruit's public art installations — a fruit tree in a planter at the Los Angeles State Historic Park.

The Stoneview Nature Center is a lovely new five-acre public park in Los Angeles with seven different types of orange trees, avocados, figs, grapes, lemons, blackberries, lemonade berries, and blueberries galore. An open path snakes around the manicured space. There's a birdhouse for quails to lay their eggs, a hotel for native bees to drop in, a hand-drawn maze on asphalt for the kids and picnic tables for the families.

The fruit is completely free to the public, though many of the trees are still in their infant stages and have yet to bear much fruit. Time, though, will do the trick. In a couple of years, the park will be teeming with produce.

"This is an urban sanctuary," says Shawna Joplin, the park's superintendent. "It's passive recreation. You can come here to do some birdwatching and take fruit home with you."

The fruit trees were installed by David Burns and Austin Young, Los Angeles-based artists who operate under the name Fallen Fruit. Since 2004, they've been mapping and installing fruit trees around the Los Angeles area and across the country.

"We were interested in how Los Angeles is a driving city, and we felt really disconnected from our neighborhood and community and thought that a map [of fruit trees] would help people meet their neighbors," Young says. He hoped the map would l inspire people to immerse themselves in their neighborhoods.

But soon, they began to plant actual trees.

In 2013, they opened their first fruit park in California in El Segundo, which was commissioned by the Los Angeles County Department of Cultural Affairs. Since then, they've been hired to plant their projects around the world.

Recently, Burns and Young installed an orange orchard in the Los Angeles Historic Park. Quotes submitted by members of the local community wrapped around the planters, with messages like "Sharing is essential with new friends." The duo is also working on creating an urban fruit trailhead on a 13-mile trail network called Park to Playa; it will be Los Angeles County's first regional trail that will connect urban residents to the natural coast.

At the Stoneview Nature Center, which opened in April, the pair prioritized fruits that have played a role in California history, arranging them in the colors of the rainbow. There, you'll find pomegranates (red), next to oranges, then lemons (yellow), avocados (green), berries (blue and indigo), and finally, grapes (violet). 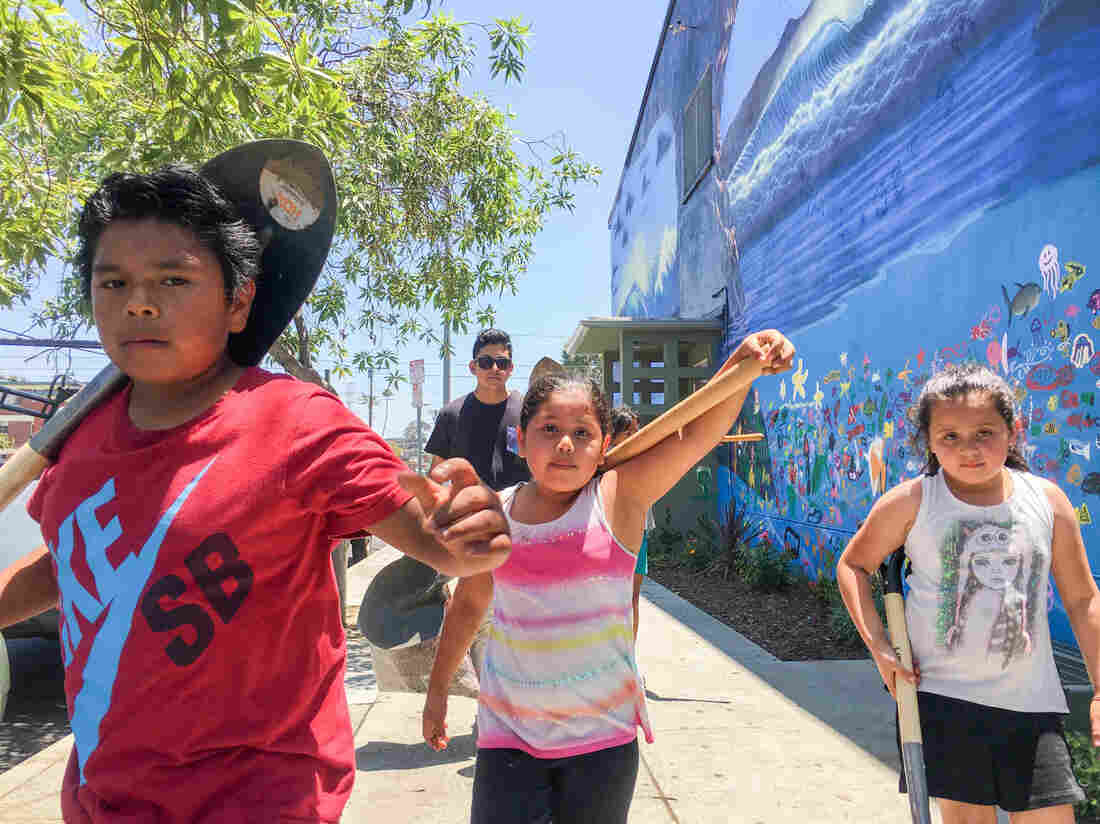 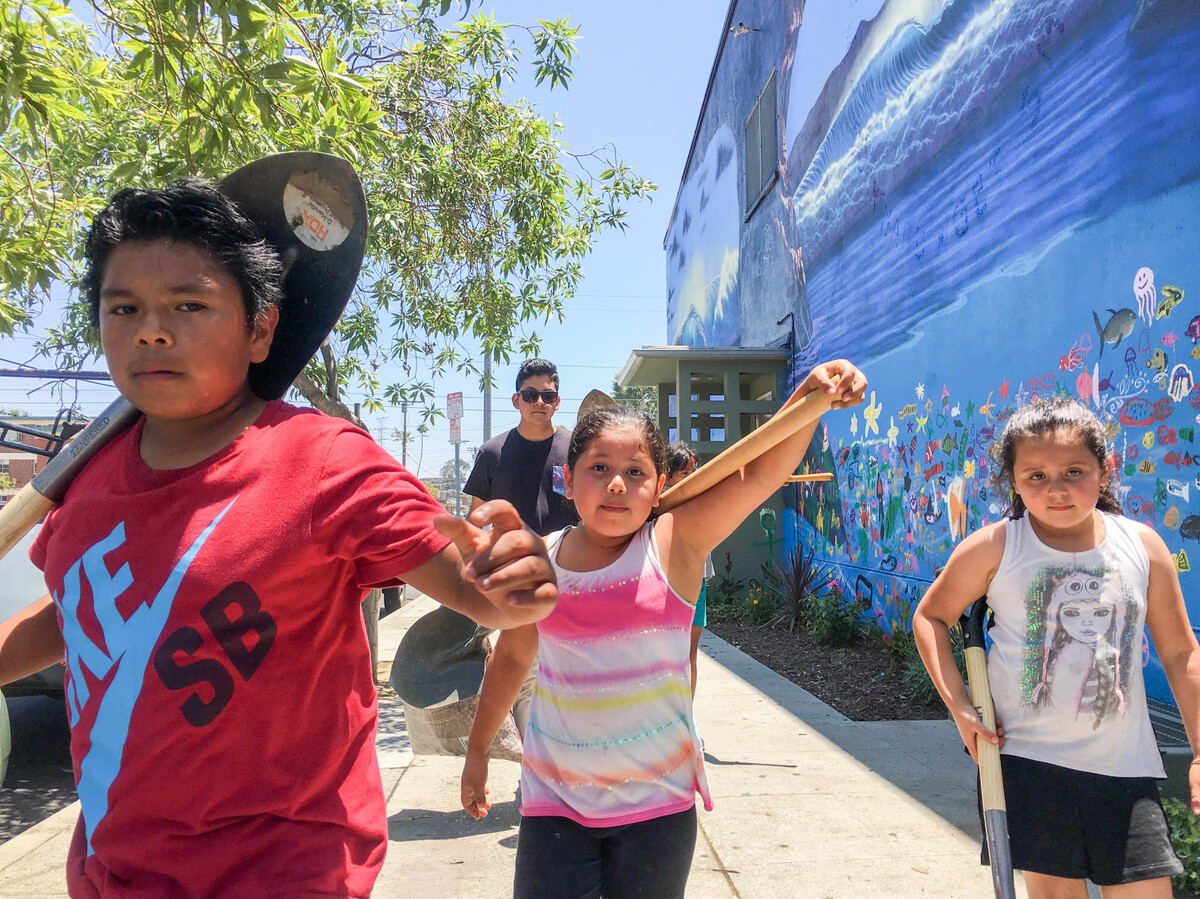 Students from Ann Street Elementary in Los Angeles plant fruit trees for their neighbors and passersby to share.

"Every park site is different," Burns says. "We also pay attention to a quantity that supports the neighborhood and the space, and also the ripening and blossoming schedule."

The quantity is astonishing: The parks that Burn and Young have worked on typically hold around 20 to 50 trees. A tree takes two to four years to mature. Once it does, each tree can produce 300-500 pounds of fruit each year during its lifespan of up to 50 years. 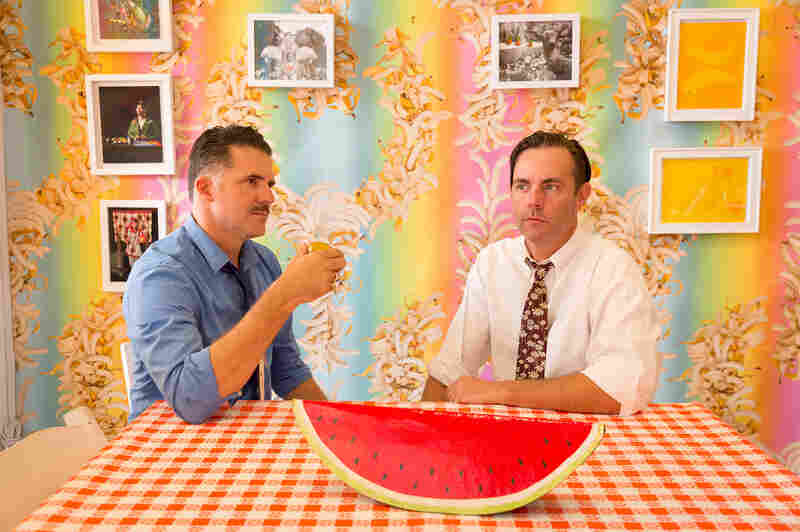 "It's more than just feeding people and thinking of gardening," Burns says, explaining the thinking behind their fruit tree selections. "We're also thinking of historic and cultural meaning."

For example, he says they plant Hass avocado trees because the Hass was the first fruit patented in California. And the lemon trees in the Stoneview Nature Center's lovely rainbow-colored grove hark back to a time in the early 20th century when Mexican-American children were forced to attend segregated schools that were essentially feeder schools to the lemon industry, which used the children as laborers.

In early 2017, Burns and Young launched a digital project called Endless Orchard — an online database of public fruit trees across the United States. "We invite everyone to share their fruit, to plant fruit trees in front of their house and map it," Young says.

When it comes to Los Angeles, the fruit map provides revealing perspective on the city's demographics. For instance, Young and Burns have noticed that in Historic Filipinotown, there's a high concentration of persimmons, a fruit popular in that culture.

"Places with a strong Middle Eastern influence tend to have a lot of fig trees, and there's lots of pomegranates south of Melrose — perhaps that's because of the Armenian culture there," Young says.

The map is also reflective of Angeleno history. Remnants of the old orange and lemon groves of the San Fernando Valley are apparent today. "You can see still the original grid of some of these orchards," Burn says. "So many neighborhoods [in Los Angeles have] grown around these old orange groves."

And that lies at the heart of their mission: to use fruit as a medium to get people physically connected with their neighborhoods.

"We think of it as social sculpture," Young says. "It's an artwork that in a real way changes people's relationship to space."