Accessibility links
Ethiopia's Coffee Farmers Are 'On The Front Lines Of Climate Change' : The Salt A new study says that Ethiopia could lose more than 50 percent of its coffee growing regions to climate change. But, higher altitude areas could become more suitable for coffee in the coming decades. 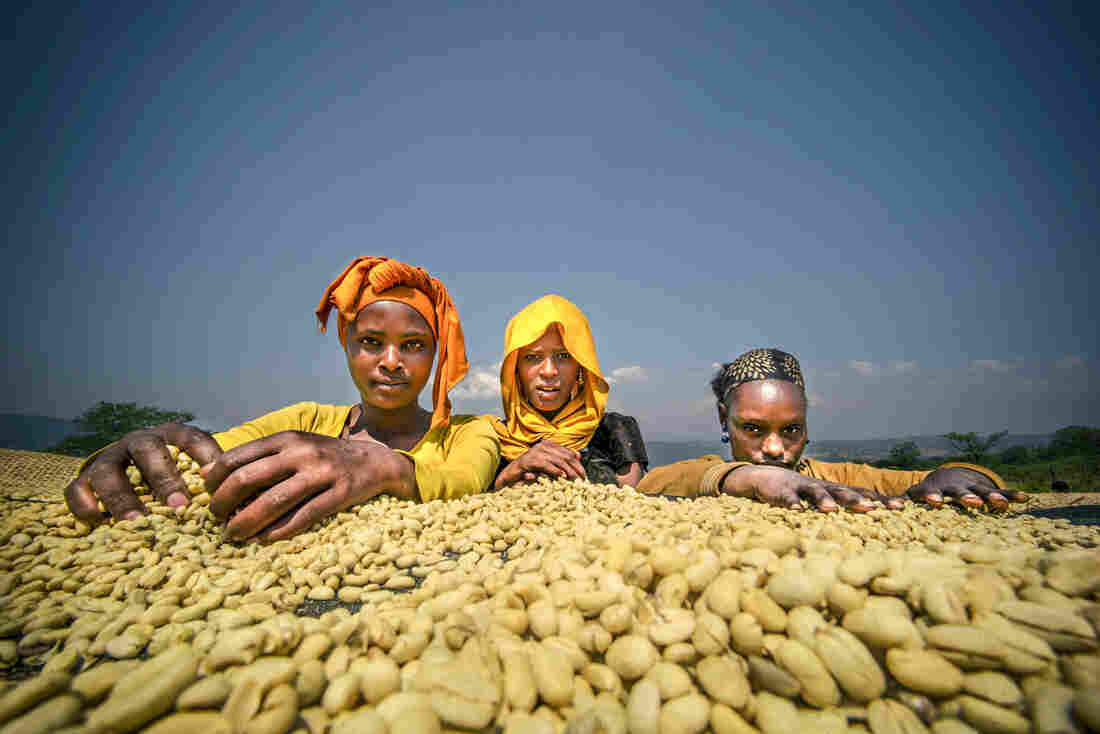 Growing coffee provides income for about 15 percent of Ethiopia's population and is the country's top export. Climate change is likely to shrink the land suitable for coffee, thereby also hurting the livelihoods of many people. Courtesy of Emily Garthwaite hide caption 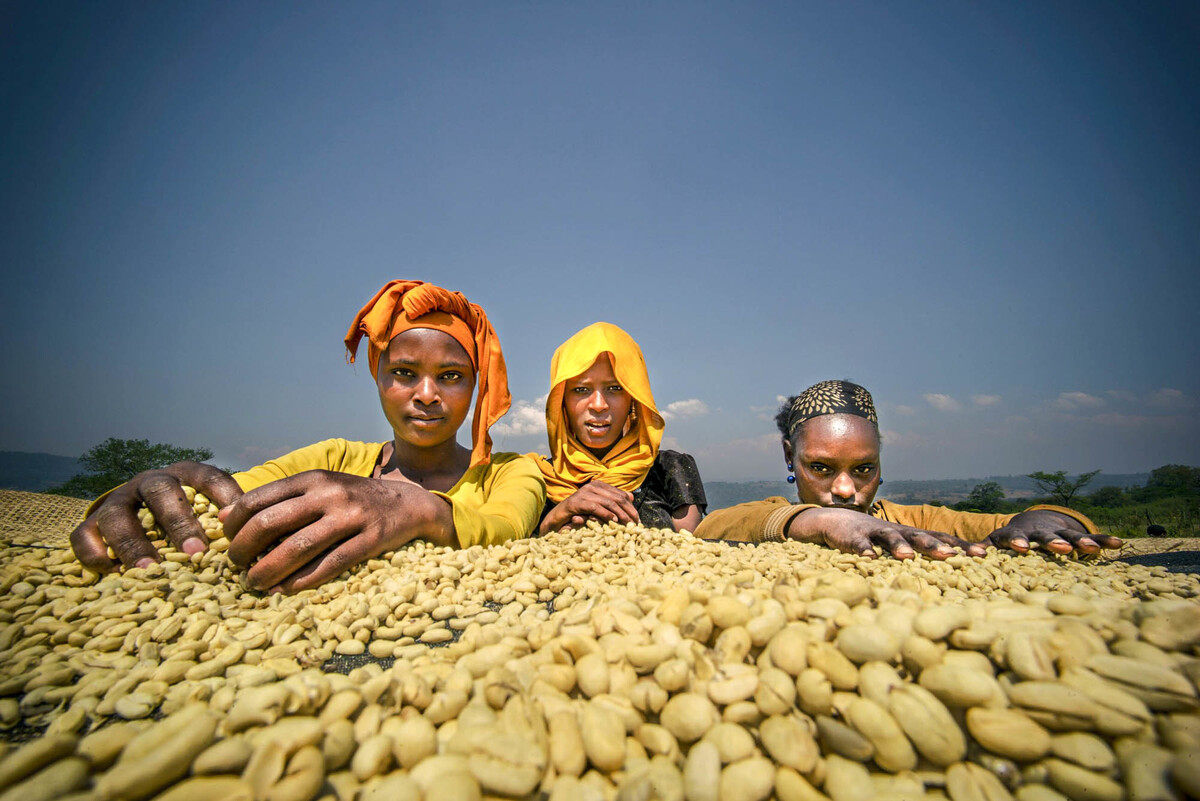 Growing coffee provides income for about 15 percent of Ethiopia's population and is the country's top export. Climate change is likely to shrink the land suitable for coffee, thereby also hurting the livelihoods of many people.

Ethiopia gave the world Coffea arabica, the species that produces most of the coffee we drink these days. Today, the country is the largest African producer of Arabica coffee. The crop is the backbone of the country's economy – some 15 million Ethiopians depend on it for a living.

But the effects of climate change – higher temperatures and less rainfall – could take a toll on the country's ability to farm this treasured crop. In parts of Ethiopia, spring and summer rains have already declined by 15 percent to 20 percent since the 1970s. Climate data shows that rainfall in Gore, a town in southwestern Ethiopia, has declined by more than 40 inches since the 1950s. And the frequency of droughts has increased in recent years, affecting coffee growing regions as well.

Ethiopia could lose from 39 percent to 59 percent of its current coffee-growing areas to climate change by the end of the century, according to a new study published in Nature Plants.

Ethiopian coffee farmers are "on the front lines of climate change," says Aaron Davis, a scientist at the Royal Botanic Gardens, Kew, in London, and one of the study's authors. He says many coffee farmers have told him that they are experiencing less frequent harvests.

A 2012 report by the Famine Early Warning Systems Network and other U.S. agencies found that continued warming in Ethiopia could reduce the country's coffee-growing area, but it didn't offer details on the extent of that potential impact.

The authors of the new study used satellite imagery and climate models to get more detailed projections on what parts of Ethiopia would be suitable for growing coffee in the coming decades. The team then tested their model's accuracy by doing some "rigorous ground-truthing," says Davis. Over several years, he and his colleagues traveled to Ethiopia to verify their satellite imagery and model projections against actual conditions on the ground. 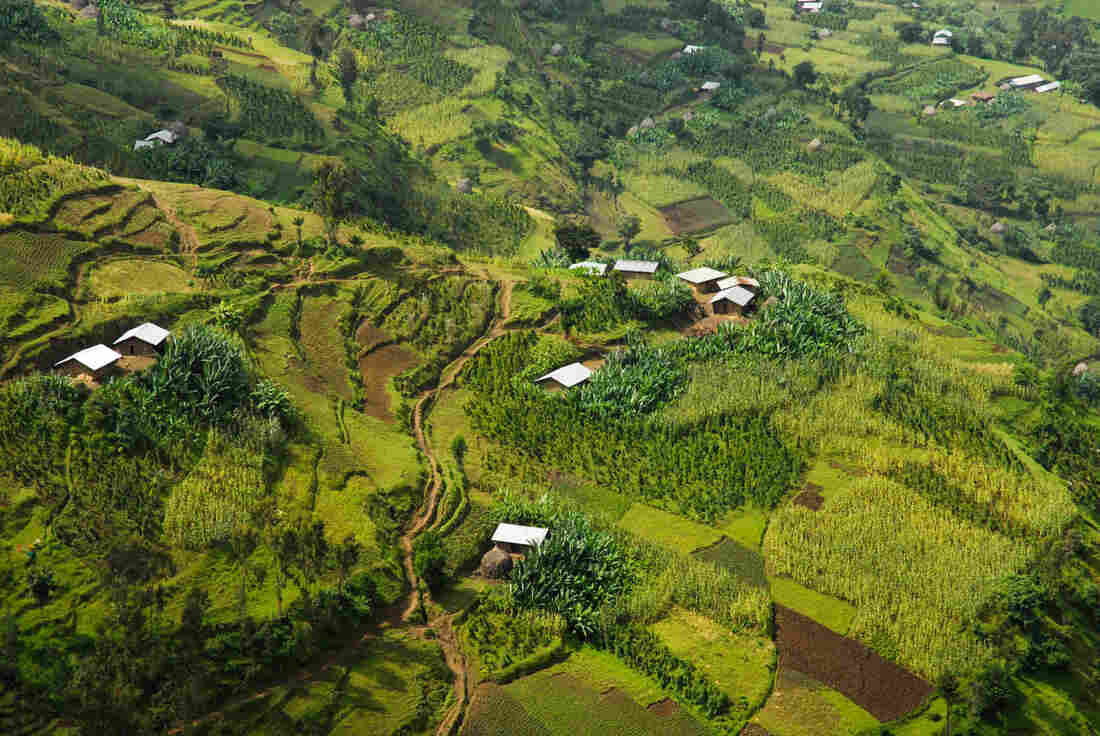 The vast majority of Ethiopia's coffee is grown on 4 million smallholder farms. Many farmers don't have the money or resources to adapt to the changing climate. Courtes of Royal Botanic Gardens, Kew hide caption 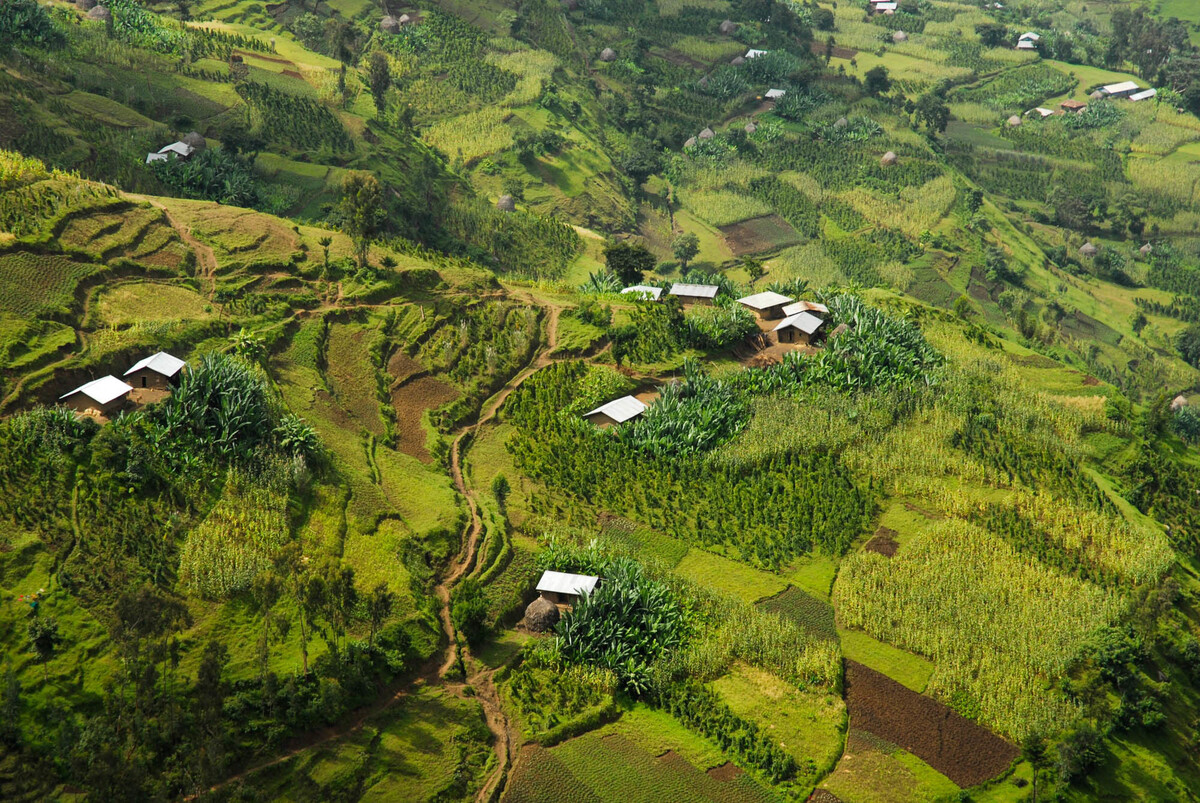 The vast majority of Ethiopia's coffee is grown on 4 million smallholder farms. Many farmers don't have the money or resources to adapt to the changing climate.

While he was in central Ethiopia in 2015, Davis says he saw the effects of drought firsthand.

"When we arrived, hundreds if not thousands of hectares of coffee were completely dead," he says. This was a highly productive plantation in the Harar region that had been around since 1910. "And it just seemed that it had reached the tipping point."

However, coffee farmers could adapt by moving their plantations to newer, more suitable regions in the coming decades, the study finds. Most coffee is grown in the Ethiopian highlands at altitudes ranging from about 1200 to 2200 meters, Davis says. As lower-altitude regions become too inhospitable for Arabica coffee, it may be possible to grow them at increasingly higher altitudes.

According to the study, Ethiopia's coffee-growing areas could expand despite climate change, if farmers moved their farms to higher altitudes and adopted other mitigation strategies such as irrigating and mulching.

But doing this is harder than it sounds, Davis admits.

"It looks easy in the paper, just move everything upslope, to higher ground," he says. "But in reality, it's going to take a lot of coordination, a lot of effort and a lot of resources to do that."

Most Ethiopian coffee farmers don't have those resources, Davis says. While there are some large, commercial farms, most are smallholder farms. Many farmers don't even have their own transportation and can't afford to take steps to mitigate the effects of climate change.

The new study concludes that the effects of climate change will be so severe in some of Ethiopia's coffee-growing areas, such as the eastern part of the Sidamo region, that they won't be suitable for growing coffee regardless of mitigation efforts.

Coffee expert Wondyifraw Tefera, based in Addis Ababa, who was not involved in the new study, says it's more likely that the amount of coffee-growing area in Ethiopia will decrease.

"Coffee is being pushed to the top of the mountain," Tefera says. But he hasn't seen any evidence that this can compensate for the overall loss of suitable land. 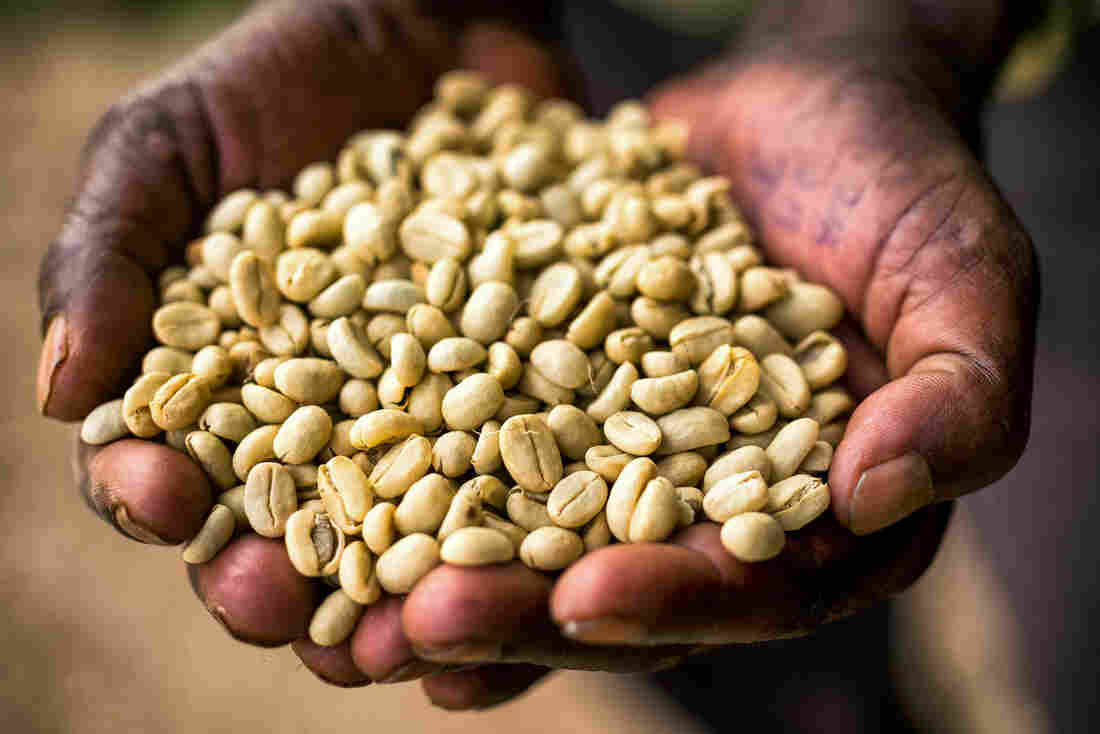 Coffee is thought to have originated in Ethiopia. Coffea arabica, or coffee Arabica, the species that produces most of the world's coffee, is indigenous to the country. Courtesy of Alan Schaller hide caption 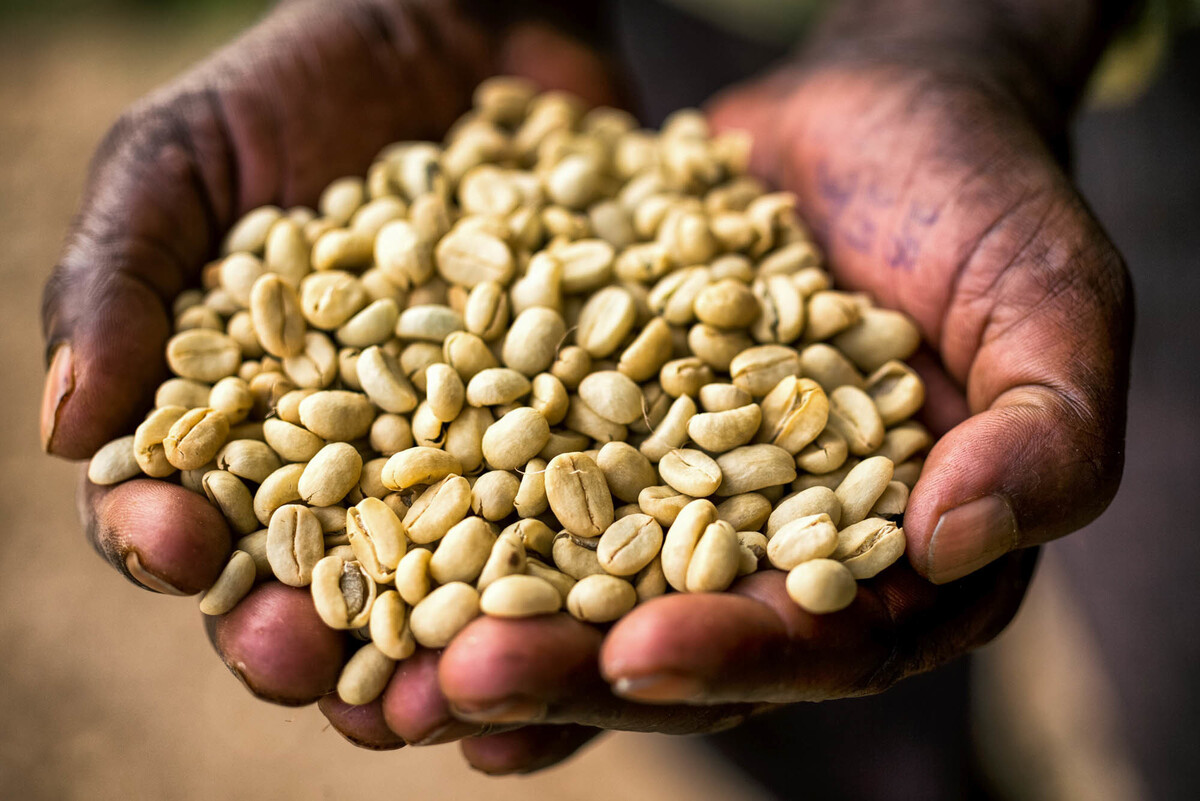 Coffee is thought to have originated in Ethiopia. Coffea arabica, or coffee Arabica, the species that produces most of the world's coffee, is indigenous to the country.

Still, Ethiopia has some highlands available for expansion of coffee, says Peter Laderach, a scientist working on climate change at the International Center for Tropical Agriculture in Hanoi, Vietnam. He studies the effects of climate change on coffee at a global scale. He says not all coffee-growing countries have access to higher land.

"Globally, overall there will be much less area available to grow coffee," Laderach says, referring to one of his recent studies that projected the effects of climate change on coffee through 2050.

He says that the new study offers more details about the Ethiopian scenario than his global study. However, he added that the study didn't factor pests or diseases which are likely to become more prevalent with changing climate.

Davis, Tefera and Laderach all agree that it may be better for some farmers to switch from coffee to other crops.

Some Ethiopian farmers have already done that. Many are now growing the more profitable and drought-tolerant khat, a plant native to East Africa, whose leaves are used as a recreational drug. Tefera says farmers can earn three to four times as much selling khat as they can from coffee.

Other farmers have switched to crops like maize, which hurt the environment. Most Ethiopian coffee grows in the shade of larger trees. Replacing coffee with maize requires clearing those trees, leading to deforestation and soil erosion.

The key may be to shift coffee plantations to currently deforested areas that could become more favorable for the crop in the coming decades, says Davis. Growing coffee and larger trees in these places would increase forest cover, while providing a source of livelihood to local farmers, he says.

A previous version of this story incorrectly described the decline in rainfall in Ethiopia. The data were specifically for the town of Gore.