Accessibility links
Is It Really So Offal? 'Ugly Food' Boot Camp Entices Chefs And Diners : The Salt Teams of cooks are making dishes from food that many American consumers would overlook — or even consciously avoid — as part of a sustainability project aimed at reducing food waste in the U.S. 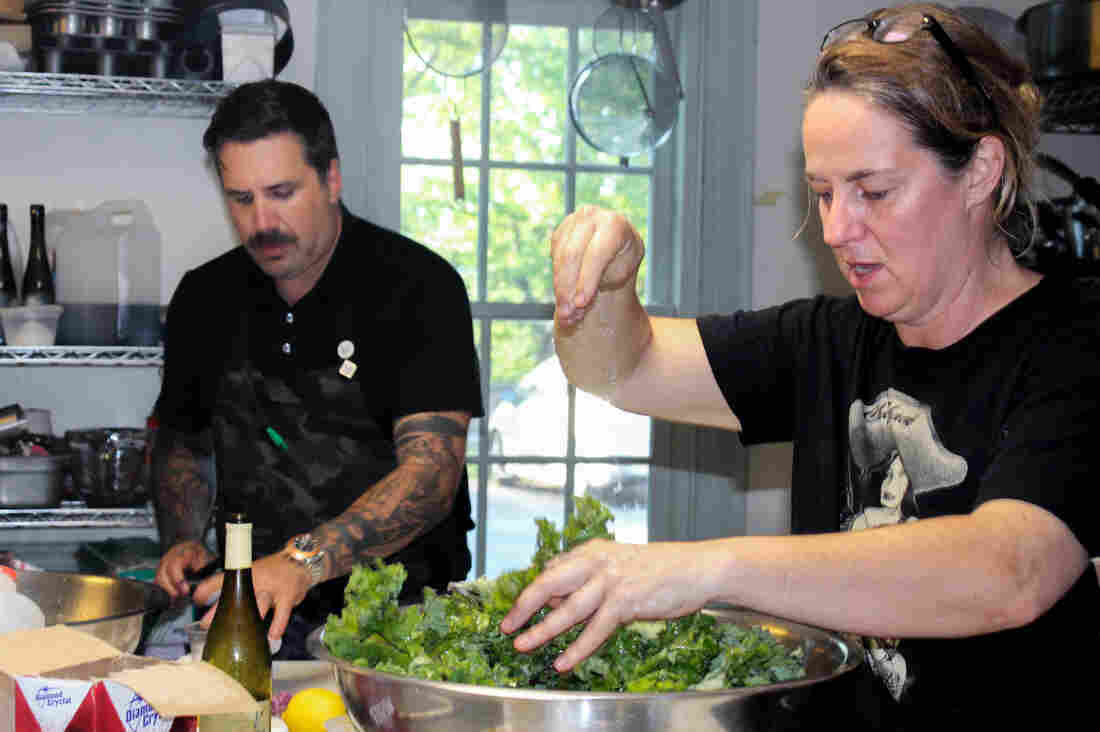 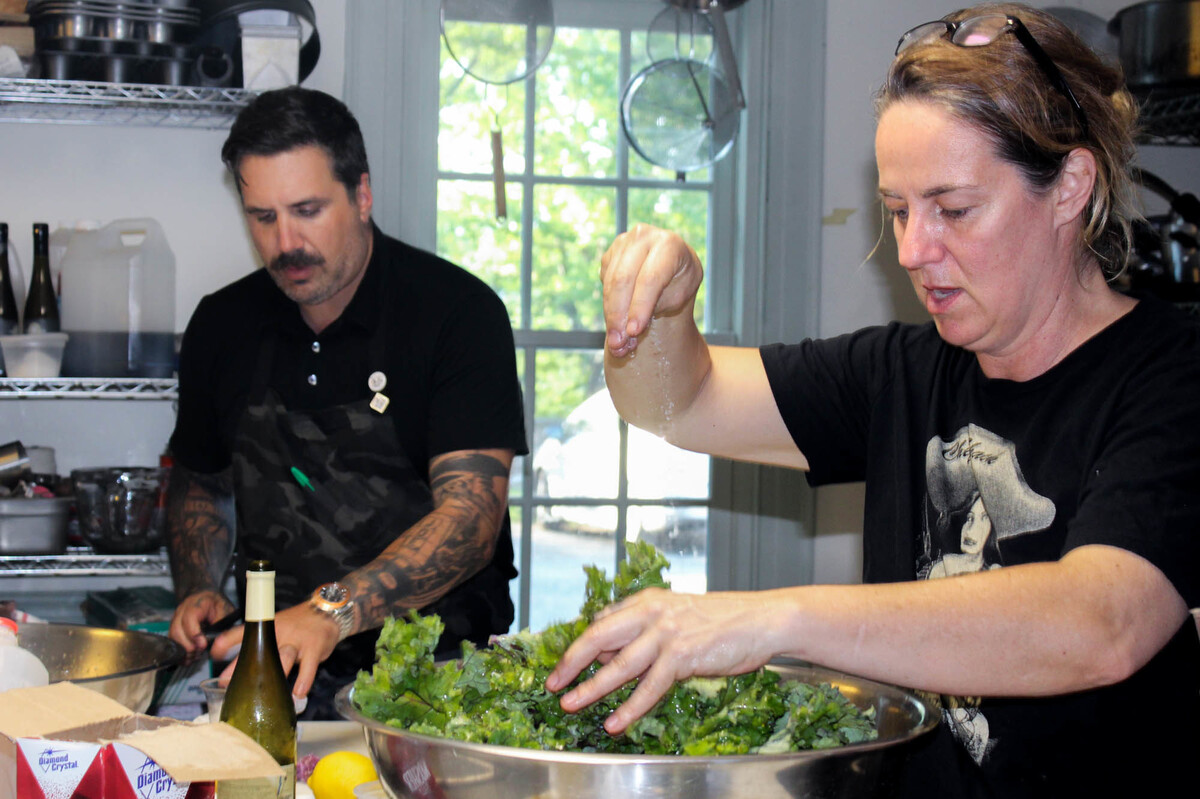 Most of it looks super-fresh, though in some cases the produce is dinged or oddly colored enough to be unappealing to distributors.

The chefs, who have come to Glynwood Farm in Cold Spring, N.Y., from around the country, tonight are making dishes predominantly from food that many American consumers would overlook — or even consciously avoid — when shopping for their families. This dinner caps a three-day sustainability "boot camp," run by the James Beard Foundation (JBF), which is on a mission to reduce by one-fifth the estimated 571,000 tons of food waste generated annually by U.S. restaurants and food service providers.

Goat was supposed to be on the menu, but Donald Arrant, Glynwood's livestock manager, got word of this too late to slaughter an animal of the right age and size. Instead, he's provided the chefs with lamb, every part of it, including the liver, kidneys, tongue and heart.

Two hours later, the chefs lay out a feast for Glynwood staff and guests. There are quick pickles made with several of the rescued vegetables; lamb leg, loin and rack; potato salad with lamb kidneys; grilled lamb livers in a chimichurri sauce; spelt salad with lamb tongues and hearts, cherries, shiitakes and kale; whole roasted cauliflower; and Pavlova topped with butter-dipped carrots and ricotta.

This meal taps into JBF's boot camp initiative and hits more than one sweet spot for chefs. Most obviously, the less food that goes in the trash, the more money a chef saves in an industry notorious for tight margins. But even before that, if a chef can buy the produce that a farm otherwise cannot sell — as in the case of the fruit and vegetables used for tonight's dinner, which was supplied by food-rescue organization Hungry Harvest — that chef is helping farmers earn a living wage. And offering up an animal that promotes healthy agriculture can help cooks work toward saving the planet to boot. Win-win-win.

Some of them already are — wittingly or not. At Crabtree's Kittle House in Chappaqua, N.Y., executive chef and boot camp participant Jay Lippin sautés arugula to serve alongside pieces of meat or fish.

"I buy damaged arugula, which no one realizes because its imperfections can't be seen," let alone tasted, when it's cooked, Lippin says.

Another boot camp chef, Lisa Carlson, started serving tongue tacos out of one of her three Minneapolis-based food trucks 10 years ago. Customers like them so much she says she's single-handedly driven up the demand for (and price of) tongue in her community.

"Think about heirloom tomatoes," says boot camp facilitator Katherine Miller, JBF's senior director of food policy. "They're delicious and amazing, and they're the original ugly [produce], with their imperfections and bulbous shapes. But years ago, chefs started putting them in Caprese salads, and customers took a risk and ordered them, and now we're totally accepting of heirloom tomatoes."

Still, it's a long way from a knobby yellow Brandywine to lamb offal — or to goat, one of the most consumed meats in the world. These can be hard sells for some steak- and chicken-loving Americans.

Arrant thinks changing minds is just a matter of education. The farm hosts an annual goat dinner and "some of our diners feel like it's crazy," Arrant says. "But they often walk away from the dinner stunned at how good goat is."

He hopes their interest can help push goat into more non-Halal butcher shops — because Arrant believes these animals are ideal livestock to raise in Glynwood's Hudson Highlands region, which can be too rocky for growing vegetables, too muddy for grazing cattle, and is overrun with an invasive shrub called multiflora rose, which goats devour. Goats and sheep also produce less methane than cattle, "so they have a positive impact on the land," Arrant says.

"I like to turn people on to new things, and once they order them, they realize, 'Oh, this is delicious,' and they'll order them again," Leeds says.

The day after the dinner, she already had ideas for getting more sustainable products into her kitchen — although she wasn't planning to start with anything as ambitious as creating buzz around goat meat. Like most of the other chefs at boot camp, her first piece of business was to call Hungry Harvest to order ugly vegetables. Maybe she'd tell customers what they were consuming; maybe she'd wait until she had stats showing how much benefit her offerings had on their community.

"People love to know about those things," says food-truck owner Carlson. "They want to do something good."

Mission Chinese Food's Anthony Myint came into boot camp with his own big idea for tapping into restaurant patrons' do-good nature, which had further crystallized in his mind by the time he was ready to leave. Coming soon to your smartphone, he hopes: restaurant sustainability ratings that customers can search via Open Table.

Lela Nargi is a Brooklyn-based journalist and author. Her food writing has appeared in publications including Gastronomica, Civil Eats and Roads & Kingdoms.