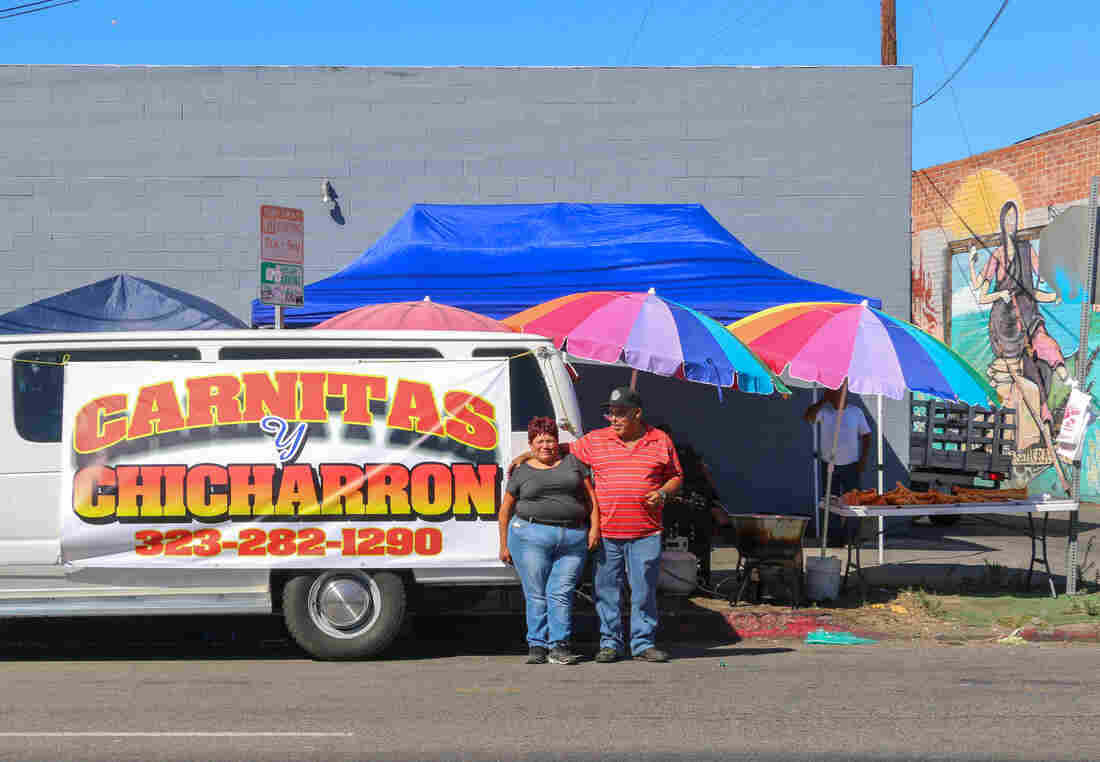 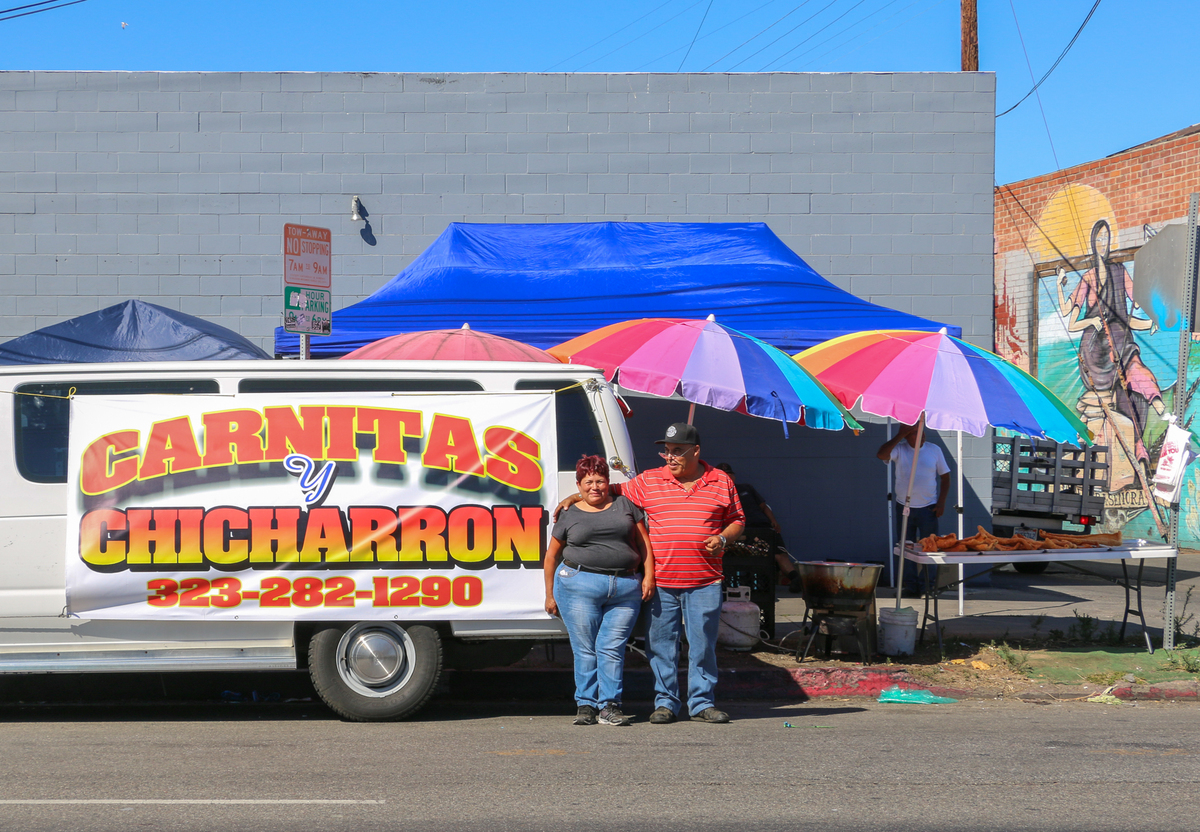 Los Angeles is the only major American city where street vending is illegal, but that will soon change.

A campaign to legalize the city's sidewalk sellers, which has been in the works for years, is finally gaining strength from President Trump — or rather, from local resistance to his immigration policies.

In the city's Piñata District, southeast of downtown, tabletop shops offer everything from baby clothes to cellphone accessories to lunch. Estela Peralta flips tortillas on a hot plancha. She chops succulent carnitas and offers a variety of homemade salsas.

Her husband, Enrique, is known for making crispy pork skins. When he left Mexico for the United States, his father gave him one piece of advice: "You should dedicate yourself to what you know — making chicharrón and making carnitas," he says in Spanish. "A pig always has feet and a head. There you'll have no problem."

The Peraltas do have one problem though — their little street food operation is illegal.

Selling on LA's sidewalks isn't allowed, even though 50,000 vendors do it openly. For years, vendors have had their wares confiscated, been ticketed, even charged with misdemeanor crimes. Peralta thinks the penalties are unfair.

"I don't know who decided that it's a crime," he says. "Selling drugs in the streets, yes. But street vending, no."

Many of LA's vendors are immigrants like the Peraltas. And for the ones who are in the U.S. unlawfully, contact with law enforcement can have especially serious consequences, like deportation.

City Councilman Jose Huizar represents the district where the Peraltas, and many other vendors, sell. He proposed legalization in 2014 but says he couldn't get political buy-in for it. In 2017, the politics look a bit different.

"Once Trump was elected and his anti-immigration, anti-Latino rhetoric was at the forefront of his campaign, council members around the city council decided to move forward," Huizar says.

Just weeks after Inauguration Day, the council began to develop a legal framework for vending and voted unanimously to decriminalize it immediately — to eliminate the chance that an infraction could lead to deportation.

"We didn't want to take a chance in further assisting with the division of families, should some of these individuals get caught up in the court system because of a small infraction," Huizar says.

Even neighborhood organizations and business coalitions that have long feared the spread of vending jumped on board with decriminalization.

As for the citywide permitting ordinance, there's sure to be more debate over the details — like which types of sellers can set up where, how many are allowed per block, and how heavily new regulations are enforced. The city's Office of the Chief Legislative Analyst is reviewing the policy and its report will likely be heard publicly this summer.

Not everyone's ready to throw the sidewalks wide open to vendors. Michael Zarabian, who owns a Mediterranean restaurant in downtown LA, says they undercut his business.

"You can't afford to sell the same sandwich for $4 with a drink. You're going to sell it for $10 to just survive," Zarabian says. "They make it look cheap."

According to Zarabian, brick and mortar businesses are held to higher standards and they're saddled with higher overhead costs. Zarabian quickly rattles off a list of his monthly expenses.

But Clare Fox of the Los Angeles Food Policy Council says legalization will actually help to level the playing field.

"If we onboard street vendors into a formal economy, they'll be paying taxes, they'll be buying their business permits, and they are procuring their products from other suppliers," Fox says.

Fox helped to provide recommendations for the new vending ordinance. She says street vendors aren't trying to avoid regulation. They're asking for it.

"Street vendors want this," Fox says. "They're the ones at the forefront of this campaign saying, 'Hey, we're in. We want to get a permit and play ball.' " 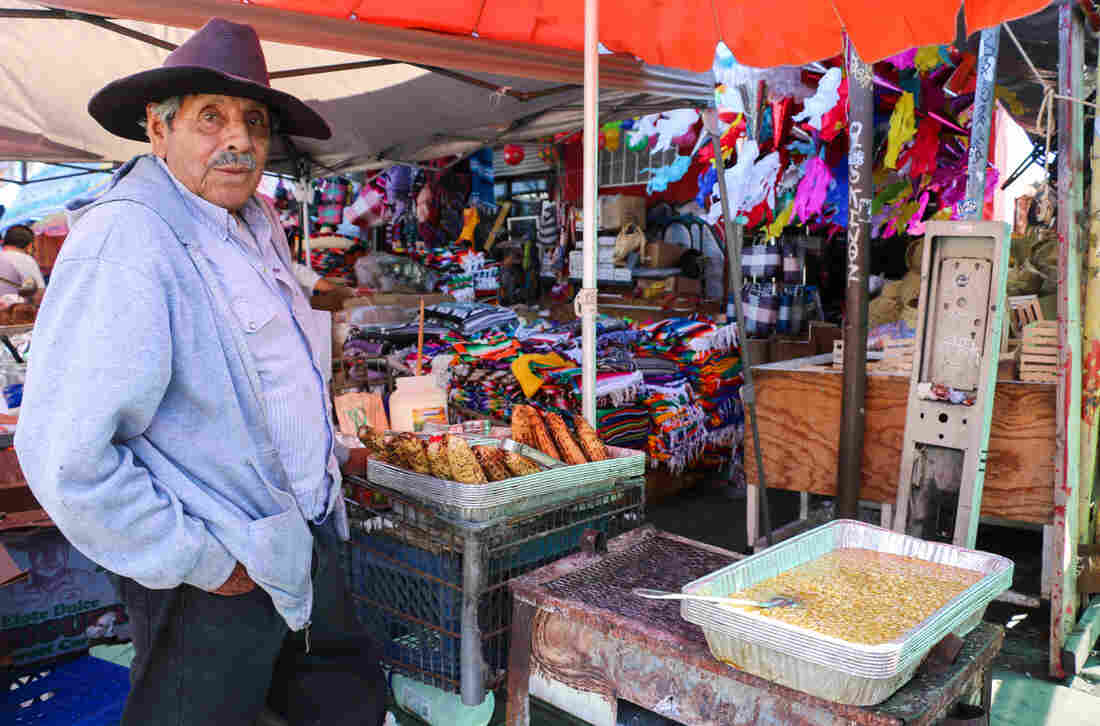 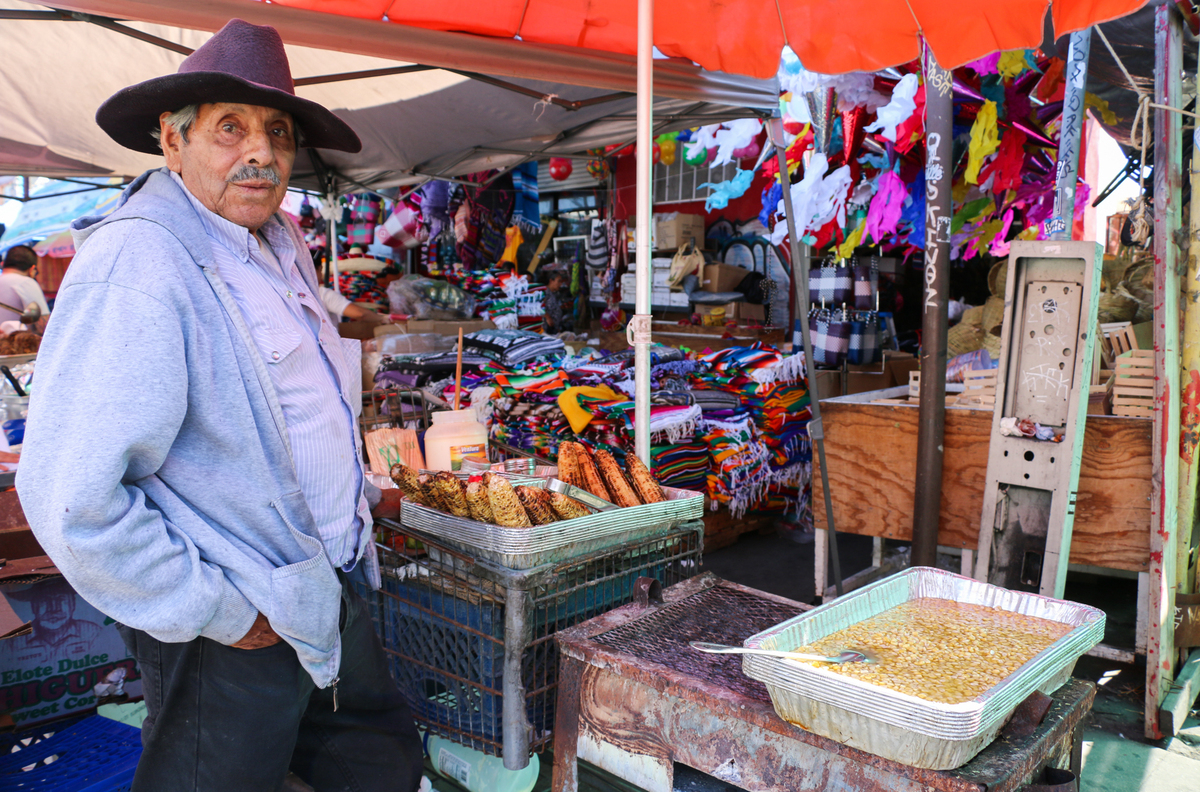 That ability to play ball is exactly what Enrique Peralta craves for his family and business.

"Todos somos iguales," he says. Everyone's equal. The thought of not having the right to work upsets him.

Peralta says he makes an honest living. And now, he wants to make a legal one. He attends a monthly gathering of street vendors who have been campaigning for the new ordinance, led by Carla de Paz of the East LA Community Corp.

"Compañeros!" she opens, speaking in Spanish. "Decriminalization. ... what does that mean?"

De Paz wants to be sure that the roughly 60 vendors in attendance understand what the movement has accomplished so far — and what it hasn't.

"We can't vend legally yet, but they won't arrest us anymore," she explains.

There's a sense of optimism in the room, but it's tempered with anticipation. De Paz worries that the city won't provide enough funding for outreach and education when the new permitting system is finally up and running, and that without it, vendors may not understand how to comply with new regulations.

Sellers voice concerns that a proposed limit of just two vendors per block will threaten their bustling, informal street markets. They plan a citywide cleanup event to build goodwill in communities where they work in the highest concentrations. The meeting ends with a battle cry.

"Quando luchamas, ganamos!" The vendors chant. When we fight, we win.