Accessibility links
From Film Stars To Naturalists, These Lives Have Become Boozy Inspirations : The Salt Breweries and distilleries are collaborating with artists and fashioning their drinks after influential people to try to better connect with customers or bring attention to the drink's origin.

From Film Stars To Naturalists, These Lives Have Become Boozy Inspirations

From Film Stars To Naturalists, These Lives Have Become Boozy Inspirations 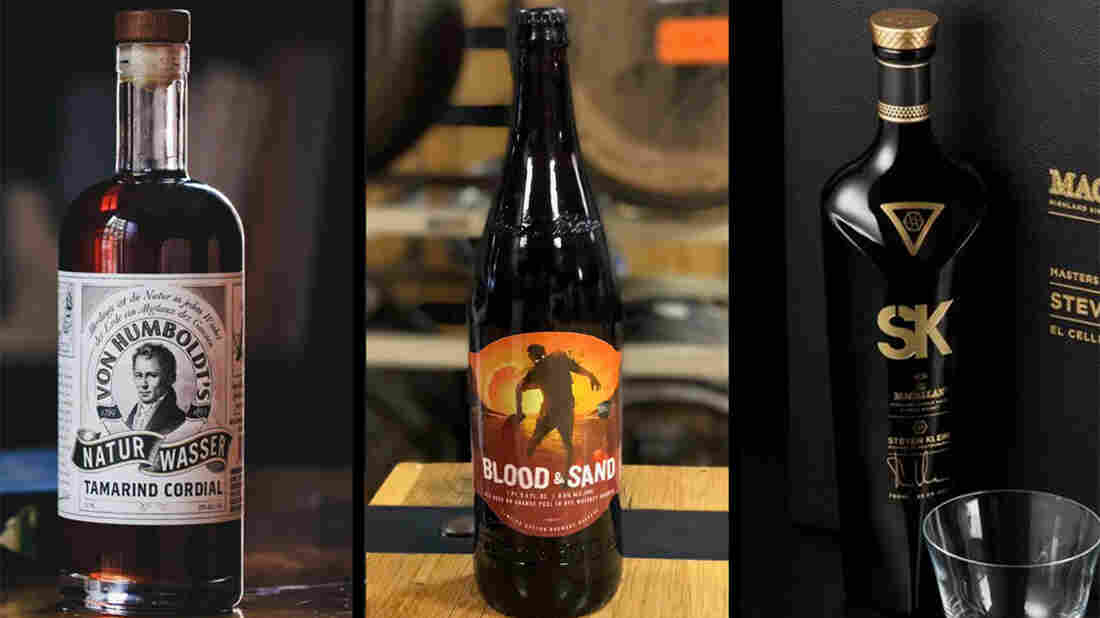 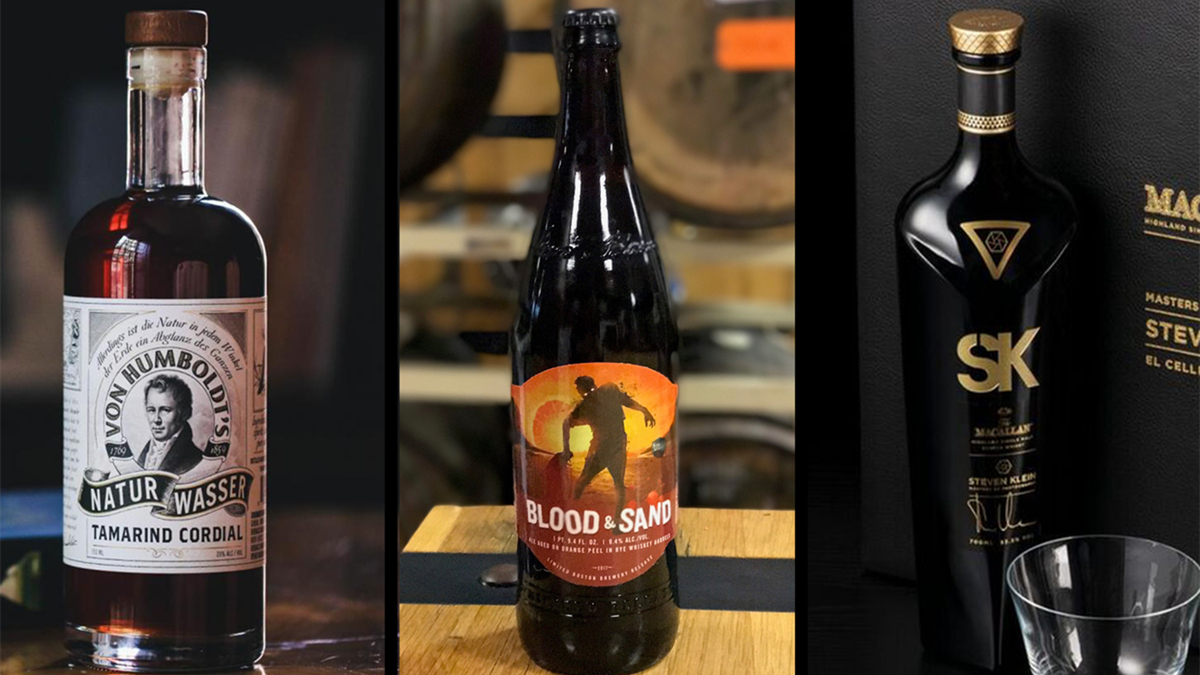 Courtesy of Tamworth Distilling, Samuel Adams and The Macallan

If you've never heard of Alexander von Humboldt, a once world-renowned Prussian scientist who predicted man-made climate change in 1800 and was an adviser to President Thomas Jefferson, then a New Hampshire distillery is aiming to change that, one glass at a time.

"One of the things that really struck a chord with us was that Humboldt was fascinated by nature, and we're fascinated by it, too," says Jamie Oakes of Tamworth Distilling. "We'll take a walk through a sunny pine grove and then try to figure out how we can distill those smells in liquid form."

Oakes and fellow Tamworth distiller Matt Power were particularly inspired by Andrea Wulf's book, The Invention of Nature: Alexander von Humboldt's New World, which chronicles the naturalist's global exploration of plants, animals, geography, geology and meteorology. Zeroing in on a passage detailing purchases made by Humboldt from Capuchin monks before he ventured onto Venezuela's Rio Apure, the two distillers were intrigued by the tamarind pods said to turn the brackish river water into a "refreshing lemonade." Shortly thereafter, they set about creating a tamarind cordial under the moniker of "Von Humboldt's Natur Wasser."

"Most of the time, we're limited by what we can grow here in the Northeast," says Power, "but this concept allowed us to spread outside with a more global ingredient list."

Starting with the sweet and tart flavor profile of the tamarind, the distillers packed as much of the fruit as they could into neutral grain spirits, then added lemon zest and brown sugar to bring out some of the tangy, nutty tones already found in the tamarind. "We wanted to be really true to the flavor," says Oakes.

"The tamarind is pretty versatile, with some fatty, creamy qualities," notes Power. "It plays well with rum and whisky, or in place of triple sec for a margarita."

If Humboldt would be surprised to find his life's work as inspiration for a cordial, then silent film star Rudolph Valentino might be equally unprepared to be connected with a beer — by way of a cocktail.

Megan Parisi, head brewer at Sam Adams Nano Brewery in Boston, hadn't heard of the 1922 silent film Blood and Sand, starring early 20th-century heartthrob Valentino, but she was a fan of the cocktail that bears the movie's name: a blend of scotch, vermouth, Cherry Heering liqueur and a touch of blood orange juice.

"I love scotch, and there aren't many scotch-based cocktails," says Parisi, "so the Blood and Sand is one of my favorites. But then I got interested to learn more about the movie and how the cocktail evolved."

A melodramatic tale of a doomed adulterous bullfighter, Blood and Sand was reported to be Valentino's personal favorite performance, with the cocktail recipe by the same name first appearing in the 1930s Savoy Cocktail Book, just a few years after Valentino's own untimely death. Spiked with blood-red ingredients, the drink is as dramatic as its namesake.

For Parisi, the trick was in translating that inspiration to a beer, which she says is not as easy as it sounds. "There's no way to really mimic a cocktail in a beer," she says, "but you can reflect the flavors and the experience." She chose to focus on manipulating the grains at different temperatures to create more body and a higher alcohol content, which she felt would provide that scotch-like element.

"You can get totally different beers just by making minor temperature changes," says Parisi, "so I was looking to get a little bit of smoke and lingering richness."

While the beer itself has a darker tone, imparted from a cherry smoked malt, Parisi didn't want to be completely literal in her interpretation by producing a blood-red beer, instead relying on the label art of a matador zombie to provide visual references to the film.

"You can paint a flavor picture based on literature, music and movies without being too obvious," she says. "For instance, we did a beer based on the movie The Sixth Sense, and we used ghost pepper to bring just enough heat to be a little scary."

Collaborating with visual artist Steven Klein, Scotch whisky company The Macallan crafted a limited edition single malt as part of their "Masters of Photography" series, which has included photographers Annie Liebovitz and Mario Testino as contributors, among others. Klein created a short film that focuses on the concept of capturing a moment in time, alluding to how integral time is to the making of whisky. Think the "mannequin challenge" with an industrial-chic vibe.

In Klein's film, clouds of red smoke billowing behind the frozen-in-time models inspired master whisky maker Bob Dalgarno to choose Rioja red wine casks for aging the whisky, an unusual move for the distillery, according to Charles Whitfield, The Macallan's manager of brand education and prestige whiskies. "This was the first time we ever used Rioja casks," says Whitfield, "but Steven's film inspired us to innovate." The resulting whisky — which is also peated to mimic the smokiness in the film, something not typically characteristic of The Macallan's line — has a pinkish-red hue with underlying tones of sweet berries.

"The stereotype with whisky is that it's boring and traditional," says Whitfield. "Collaborating with an artist like this allows us to break out of that mold."

While The Macallan sees their collaborations with artists like Klein as a way to reach a new audience, the Tamworth distillers are hopeful that their Natur Wasser project brings more attention to Humboldt's work.

"We're trying to do him a service by learning a bit about what was valuable to him and sharing it with other people," says Power. "If that knowledge comes by way of a cocktail, why not?"