Accessibility links
Beekeepers Feel The Sting Of California's Giant Beehive Heist : The Salt This year authorities uncovered a "beehive chop shop:" nearly $1 million in stolen hives in a field in Fresno County. There's money to be made by renting out bees to orchards, and thefts are rising. 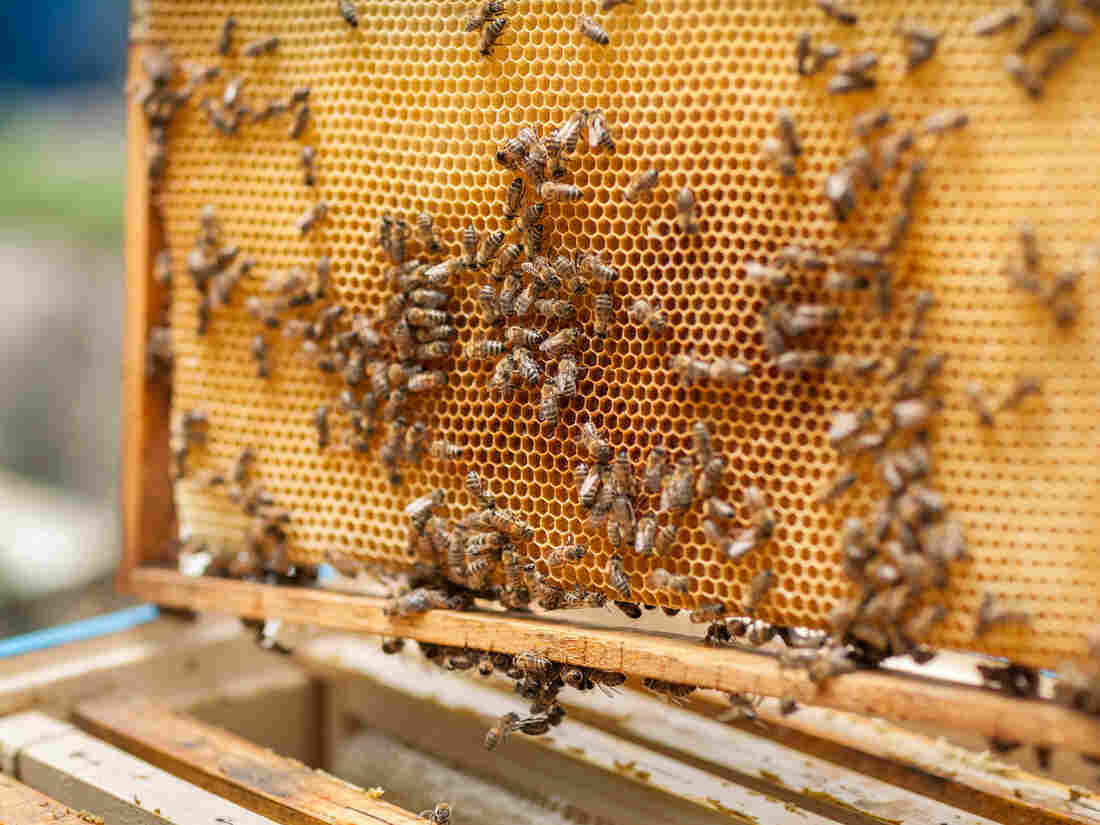 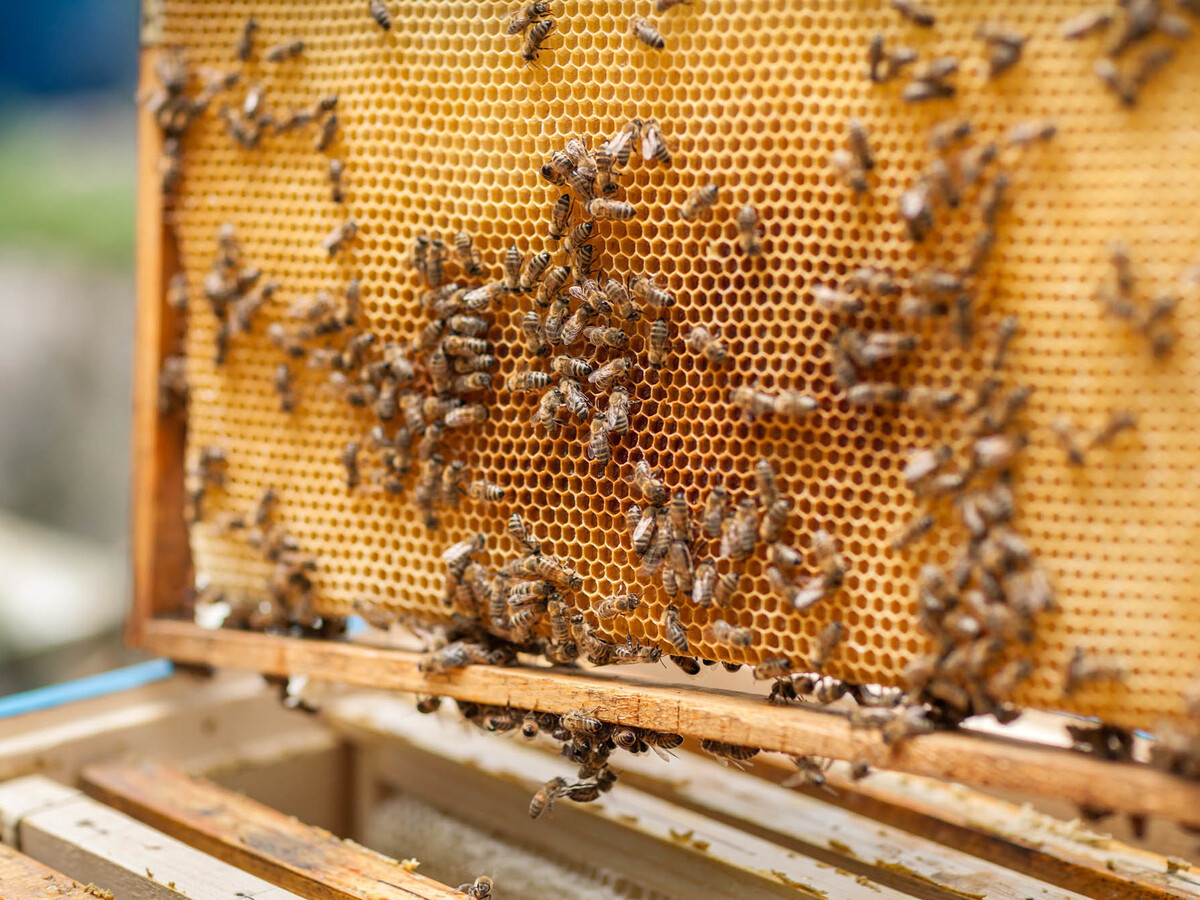 Beehives in an apiary

Seventy-one million. That's the number of bees Max Nikolaychuk tends in the rolling hills east of Fresno, Calif. Each is worth a fraction of a cent, but together, they make up a large part of his livelihood.

Nikolaychuk makes most of his money during almond pollination season, renting out the bees to California's almond orchards. This year, a thief stole four stacks of his hives.

"He knew about the bees, because he went through every bee colony I had and only took the good ones," he says. "But, you know, the bee yards — I don't have no security there, no fences."

That lack of security means his bees have been stolen more than once. And it's a type of theft that's been playing out all over the state's orchards.

Literally billions of bees are needed to pollinate California's almond crop. Not enough bees live in California year-round to do that. So they are trucked in from across the country, from places like Colorado, Arizona and Montana. Earlier this year, around a million dollars' worth of stolen bees were found in a field in Fresno County. Sgt. Arley Terrence with the Fresno County Sheriff's Department says it was a "beehive chop shop."

The bees were stolen from across California, but they belong to beekeepers from around the country. A few thousand bee boxes disappear every year, but this bee heist was different.

"This is the biggest bee theft investigation that we've had," Terrence says. Most of the time, he says, beehive thieves turn out to be "someone within the bee community." 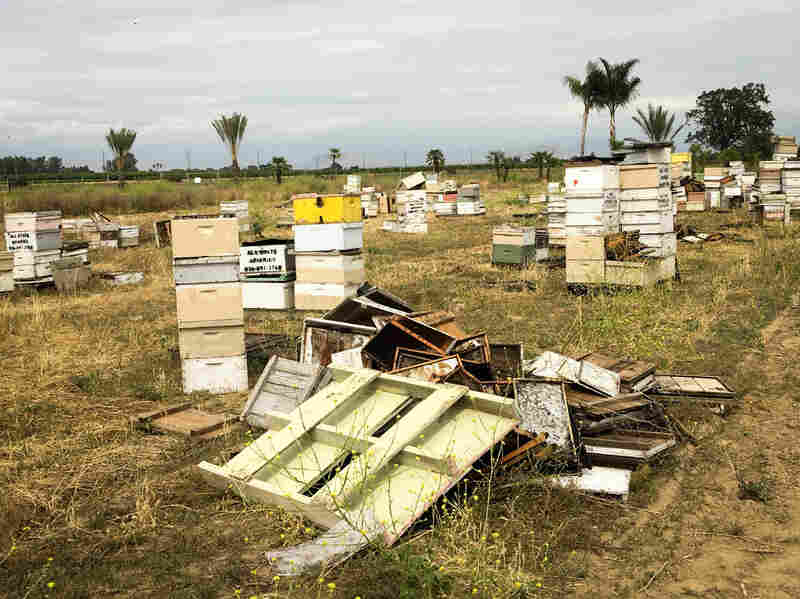 Earlier this year, California authorities uncovered this "beehive chop-shop" in a field in Fresno County. A single bee is worth a fraction of a cent, but there can be as many as 65,000 bees in each hive. Ezra Romero for NPR hide caption 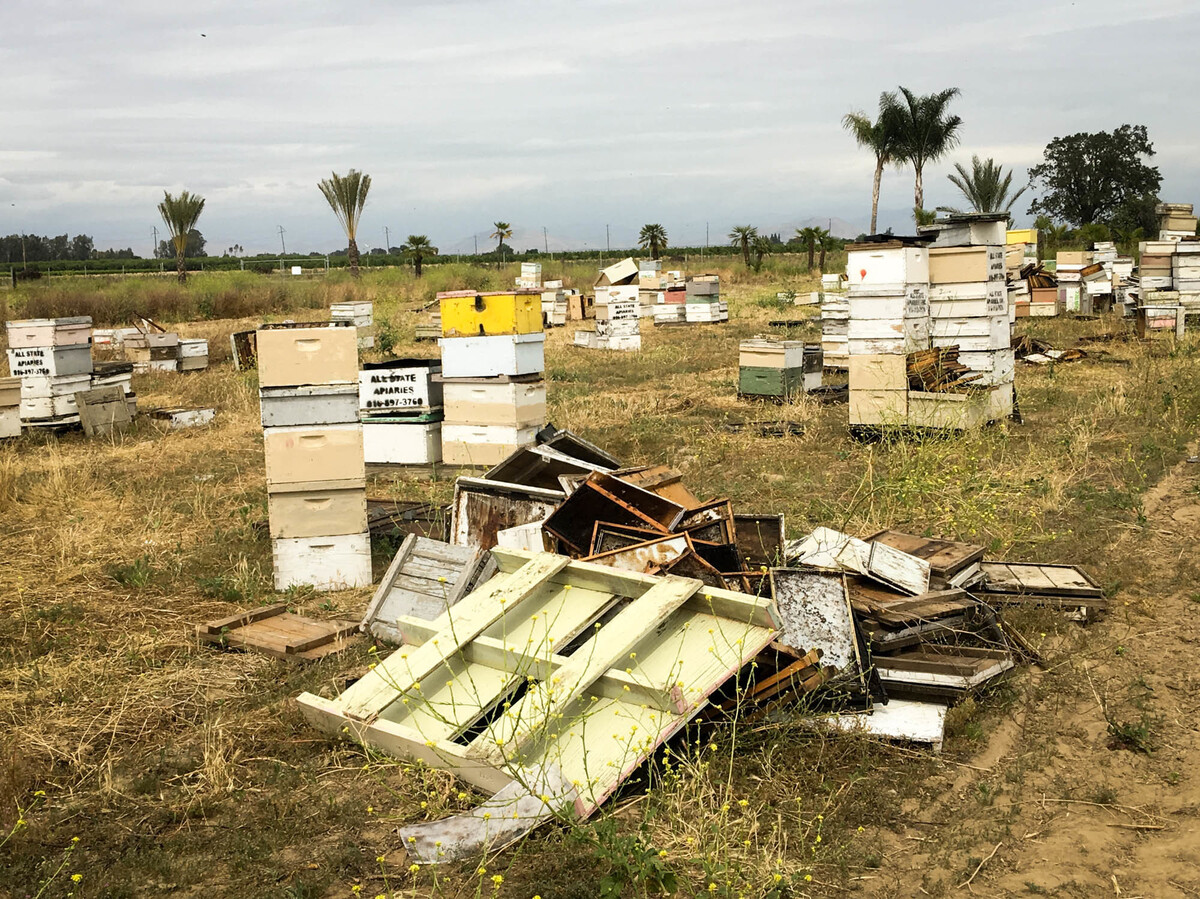 Earlier this year, California authorities uncovered this "beehive chop-shop" in a field in Fresno County. A single bee is worth a fraction of a cent, but there can be as many as 65,000 bees in each hive.

That was the case in the giant heist earlier this year. The alleged thief, Pavel Tveretinov, was a beekeeper from Sacramento who used the stolen bees for pollination and then stashed them on a plot of land in Fresno County. He was arrested and could face around 10 years of jail time. And authorities say he didn't act alone. His alleged accomplice, Vitaliy Yeroshenko, has been charged and a warrant is out for his arrest.

Steve Godlin with the California State Beekeepers Association says the problem of hive theft gets worse every year.

"There used to be kind of a code of honor that you didn't mess with another man's bees," Godlin says. But the alleged perpetrators of this giant hive theft broke that code.

"He went way, way over the line, Godlin says. "It's just, you know, heart breaking when you go out and your bees are gone."

Godlin has had hives stolen in the past. He and many other beekeepers make their income not just from renting out hives but also from selling the honey the bees produce. So when bees are stolen, beekeepers lose out on both sources of income.

Godlin says it takes time to develop a new hive by introducing a new queen and developing honey. "Bees, you know, we have been hit by everything from vandals to bears to thieves. But the vandalism and thieving is the worst. You know, the one that hurts the most."

Godlin says his organization will pay a reward of up to $10,000 for tips leading to the prosecution of bee thieves. But that only relieves some of the sting.