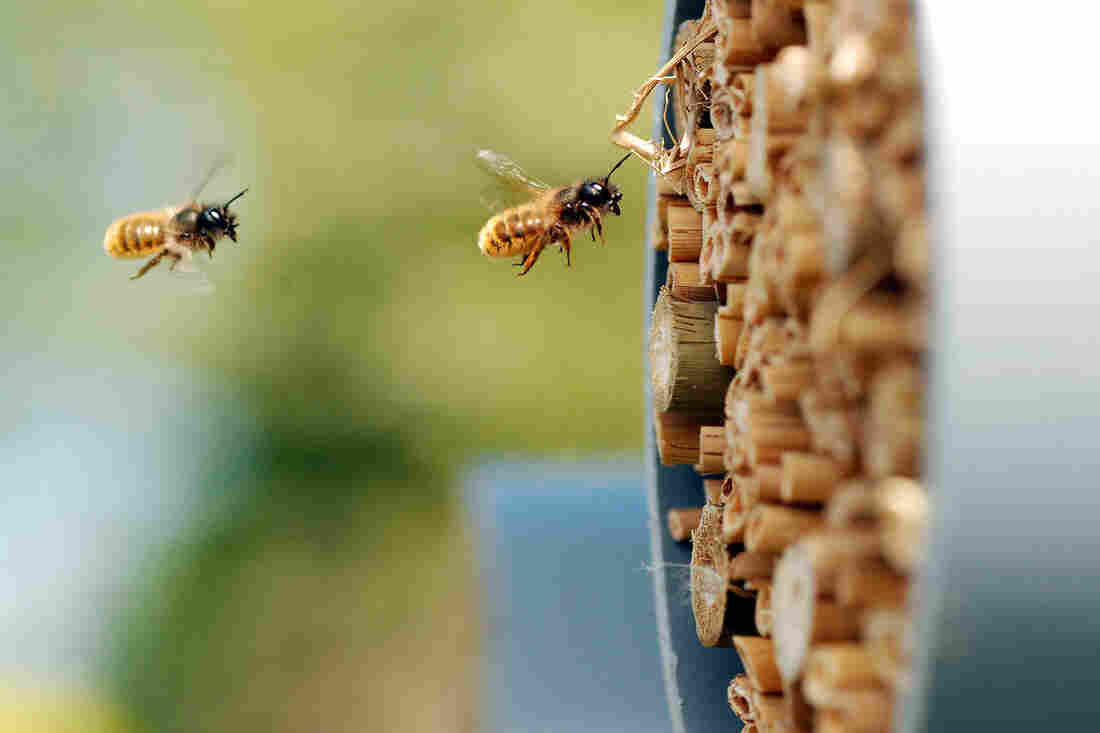 Researchers monitored the health of these wild bees, from the species Osmia bicornis. They nest inside small cavities, such as hollow reeds. Courtesy of Centre for Ecology & Hydrology hide caption 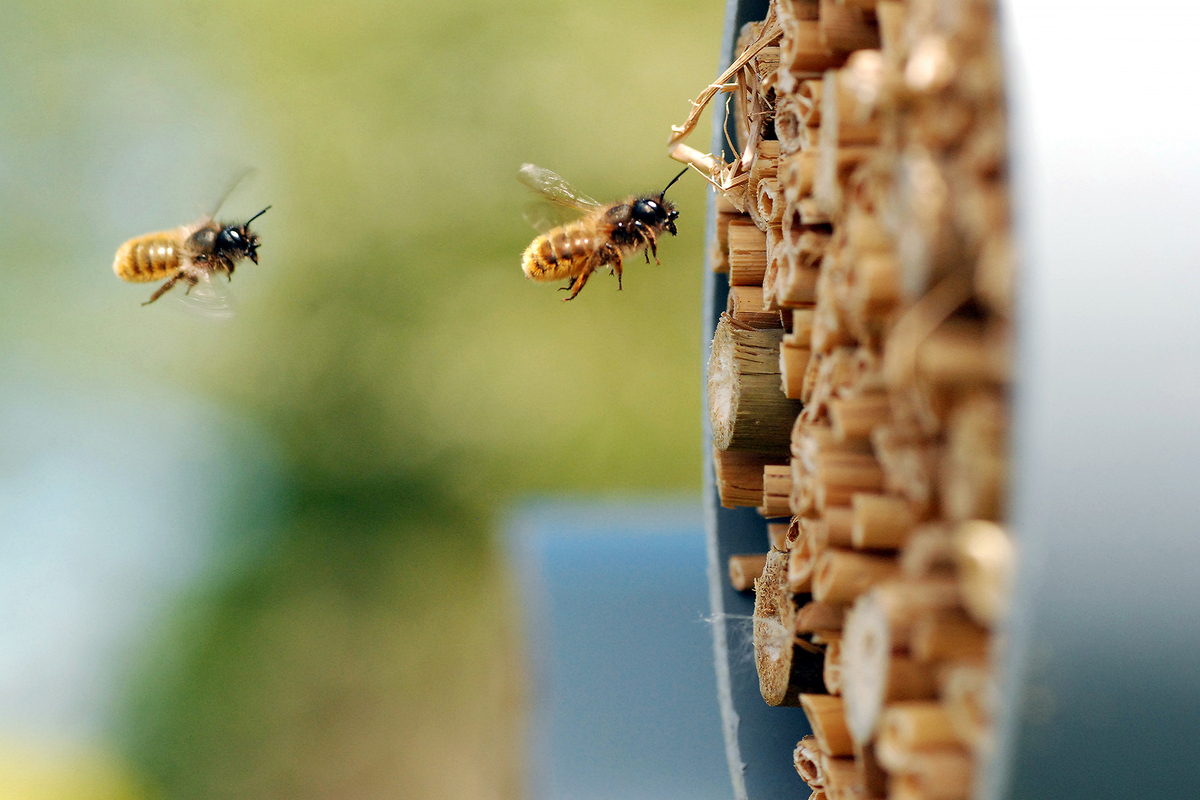 Researchers monitored the health of these wild bees, from the species Osmia bicornis. They nest inside small cavities, such as hollow reeds.

Courtesy of Centre for Ecology & Hydrology

In the global debate over neonicotinoid pesticides, the company that makes most of them has relied on one primary argument to defend its product: The evidence that these chemicals, commonly called "neonics," are harmful to bees has been gathered in artificial conditions, force-feeding bees in the laboratory, rather than in the real world of farm fields. That company, Bayer, states on its website that "no adverse effects to bee colonies were ever observed in field studies at field-realistic exposure conditions."

Bayer will have a harder time making that argument after today. (Although it still has another argument in its quiver. We'll get to that later.)

This week, the prestigious journal Science reveals results from the biggest field study ever conducted of bees and neonics, which are usually coated on seeds, like corn and soybean seeds, before planting. Scientists monitored bees — honeybees and two types of wild bees — at 33 sites across Europe, in the United Kingdom, Germany and Hungary. At each site, the bees were placed near large fields of canola. Some of the fields contained canola grown from seeds that were treated with neonicotinoid pesticides, along with a standard fungicide. Other fields were planted with canola treated only with fungicides.

At most sites — specifically in Hungary and the United Kingdom — bees feeding on neonic-treated canola fields generally fared worse than bees that got to live around untreated canola. When exposed to neonics, wild bees and honeybees had more difficulty reproducing, and fewer honeybee colonies survived the winter.

The scientist who led the experiment, Richard Pywell, from the Centre for Ecology & Hydrology in the U.K., called the results "cause for concern."

But the experiment also revealed a complicated picture, because results were very different in Germany. There, honeybee colonies seemed to prosper, whether or not they were living near canola fields treated with neonicotinoids. In fact, honeybee colonies near neonic-treated fields produced more eggs, and more larvae. (Fewer colonies survived the winter, but the difference wasn't statistically significant.)

Pywell doesn't seem bothered by this discrepancy. "We think this is a really interesting result," he says. "We believe that this goes some way toward explaining the inconsistency of previous [research results]."

Apparently, the local environment plays a big role in whether bees are harmed by neonics. "We believe that other factors interact with neonicotinoid exposure to cause negative effects on honeybees and wild bees," Pywell says.

Pywell doesn't know exactly what those "other factors" might be — his experiment wasn't set up to examine them. But it did yield some clues. 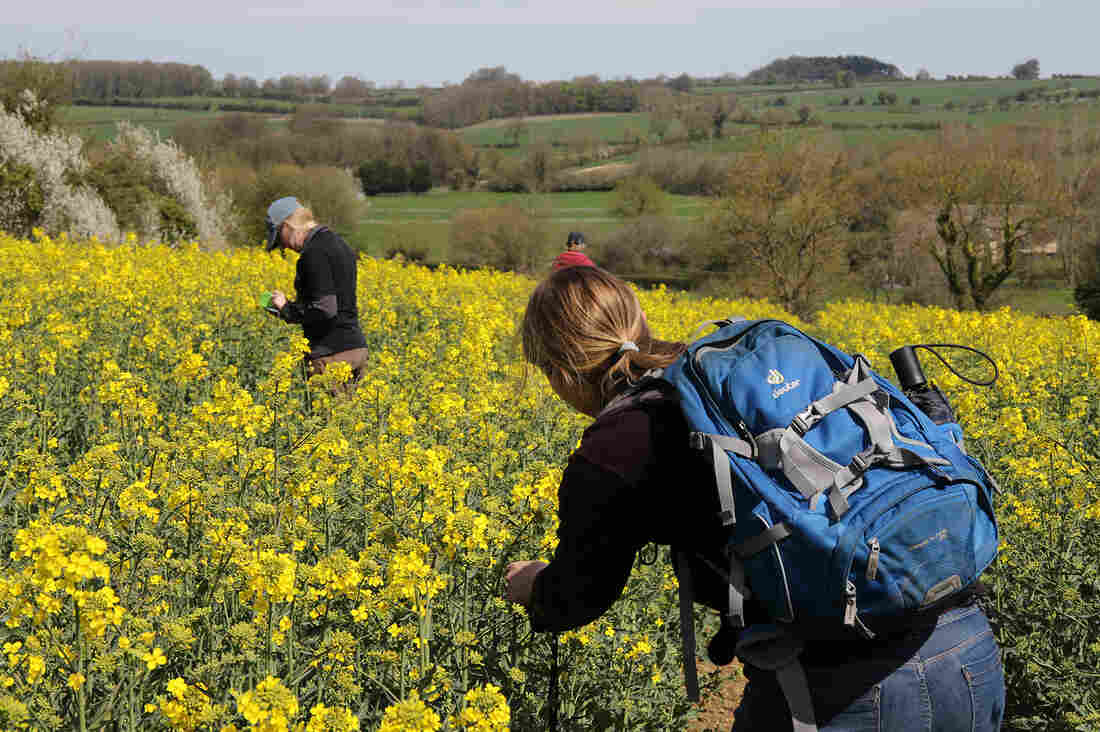 toggle caption
Courtesy of the Centre for Ecology & Hydrology 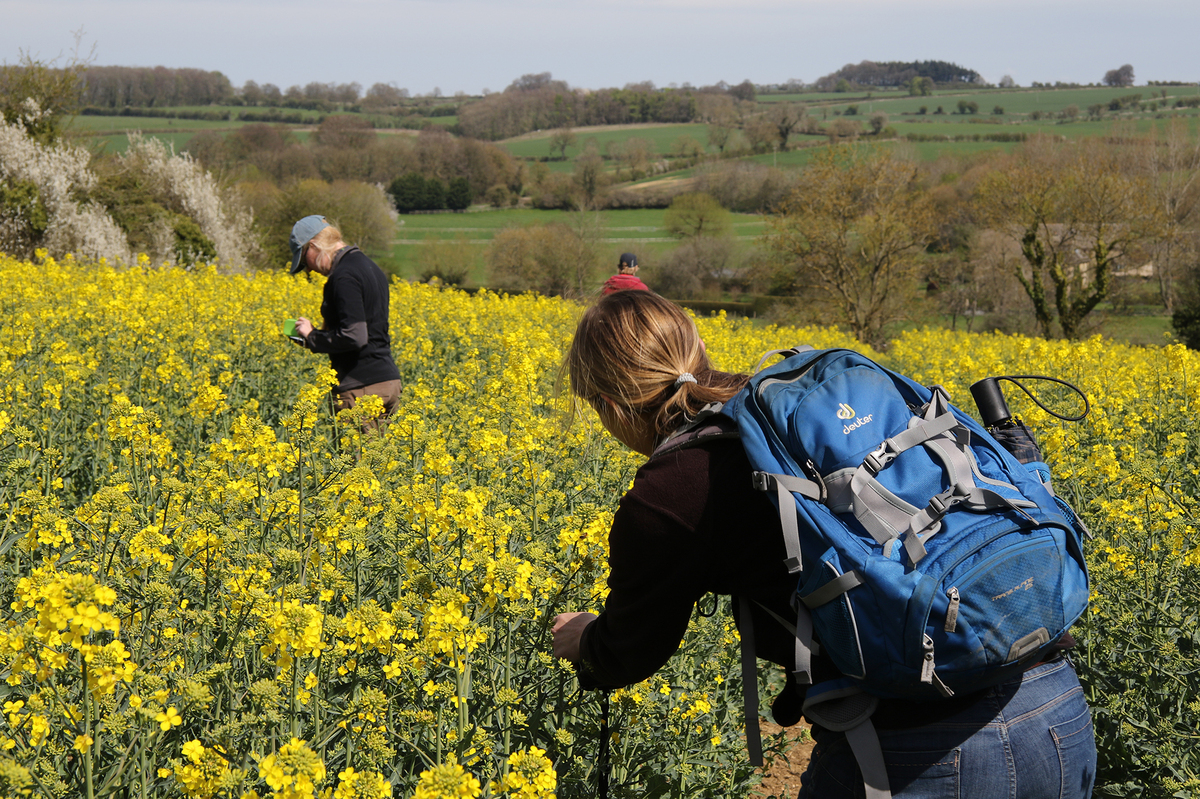 Researchers from the Centre for Ecology & Hydrology in a field of oilseed rape, or canola, in the United Kingdom.

Courtesy of the Centre for Ecology & Hydrology

Honeybees in Germany managed to find a much wider variety of flowers to feed on. In Hungary and the United Kingdom, 40 or 50 percent of the pollen collected by honeybees was from canola; in Germany, it was only about 10 percent. In Hungary, Pywell says, the bees were surrounded by huge fields of canola, and in the U.K., "because of modern farming, we've lost many of our wild flowers, so the crops are pretty much all that's there in the springtime."

Also, honeybees in Germany were relatively free of parasites, compared to bees in the U.K. and Hungary.

Pywell suspects that bees are particularly vulnerable to neonic exposure when they're highly dependent on pesticide-treated crops for food, and when they already are weakened by disease.

This is what Jeffrey Donald, a Bayer spokesman, highlighted in an email to The Salt. He wrote that "the study shows that when hives are healthy and relatively disease free and when bees have access to diverse forage, neonics do not pose a danger to colony health."

Interestingly, this study was funded in part by Bayer and another neonic manufacturer, Syngenta, but Pywell says his team of researchers "operated very independently."

In a separate field study, also published this week in Science, a team of Canadian researchers measured the levels of neonicotinoid pesticides that honeybees were exposed to at several sites in Ontario and Quebec. They compared colonies located close to corn fields with those that were farther away.

"The first surprise was that bees were bringing in pollen that was contaminated with neonicotinoids for most of the growing season — three or four months," says Amro Zayed, a professor of biology at York University in Toronto. "The next surprise was that most of the pollen, 99 percent of the pollen, was from wild plants. Not corn, and not soybeans."

Zayed says that apparently, neonic residues in farm fields get dissolved in groundwater, and some are taken up by the roots of wild plants.

Zayed and his colleagues didn't monitor bee health in the field, but they tried to replicate this field exposure to neonics in experiments with laboratory bees. What they found: Bees exposed to neonicotinoids didn't keep their hives as clean and lost their queens more often.

Nigel Raine, a specialist on bees at the University of Guelph, in Ontario, says that these experiments have helped to fill in details of a picture that scientist still don't fully understand. "The story for honeybees is complicated, but these two papers, taken together, are kind of the first field-level evidence that there can be measurable impacts on important aspects of colony development and colony survival in the field," he says.

The European study, he says, shows just how complicated the picture is. It shows that pesticides like neonicotinoids affect bees, but also reveals the importance of other factors, too.

"We shouldn't just focus on insecticides. They're part of the problem, but if we focus on that and then just say, 'OK, we understand that now, the problem's fixed,' I don't think that's right," Raine says. "We need to be clear about how we're managing landscapes, both agricultural and urban and more natural landscapes, to support healthy biodiversity of pollinators," he says.

European regulators have imposed a partial moratorium on neonicotinoid use.
In the U.S., the Environmental Protection Agency is taking a closer look at neonics, but it hasn't proposed any new restrictions on them.