Accessibility links
New Rules Against Animal Cruelty Raise The Stake For India's Beef Wars : The Salt The rules ban cattle sale for slaughter at livestock markets and come at a time of escalating tensions between Hindu extremists and beef-eating minorities. They could also hurt India's beef exports. 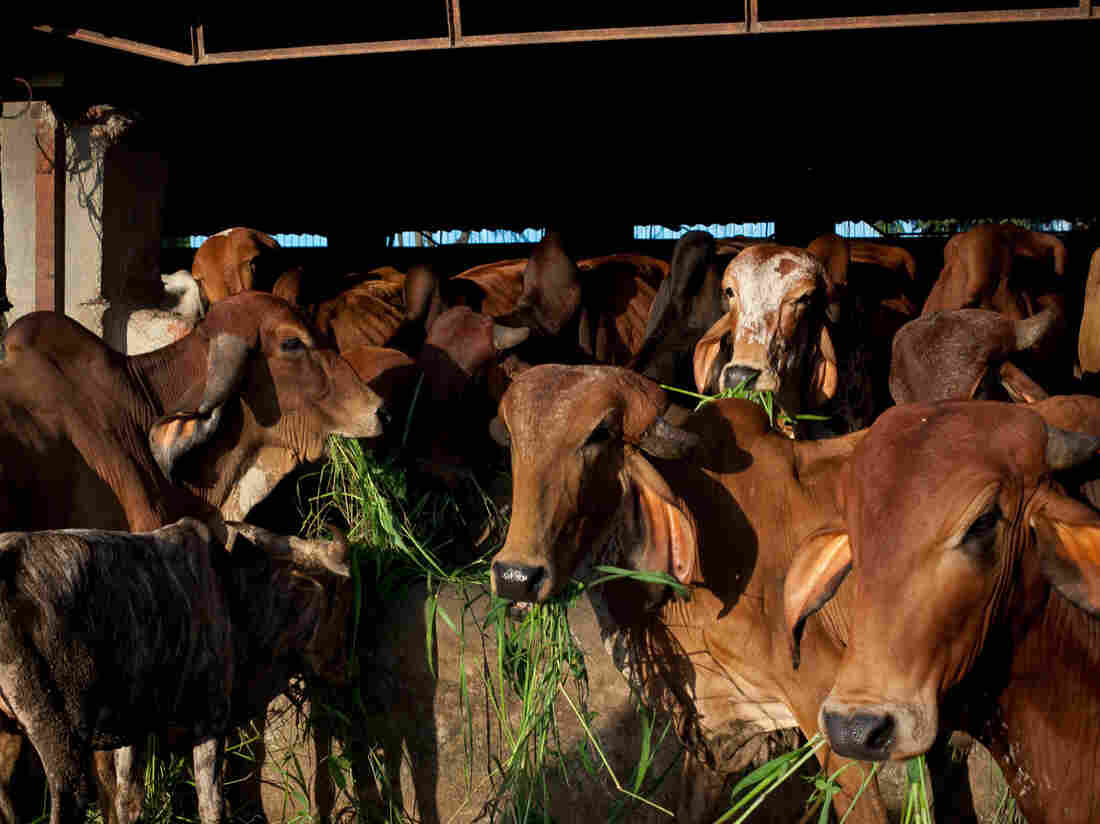 Many upper caste Hindus consider the cow holy and have long rallied to ban beef eating. Critics of the government see the new animal cruelty rules as an effort to cater to these demands. Allison Joyce/Getty Images hide caption 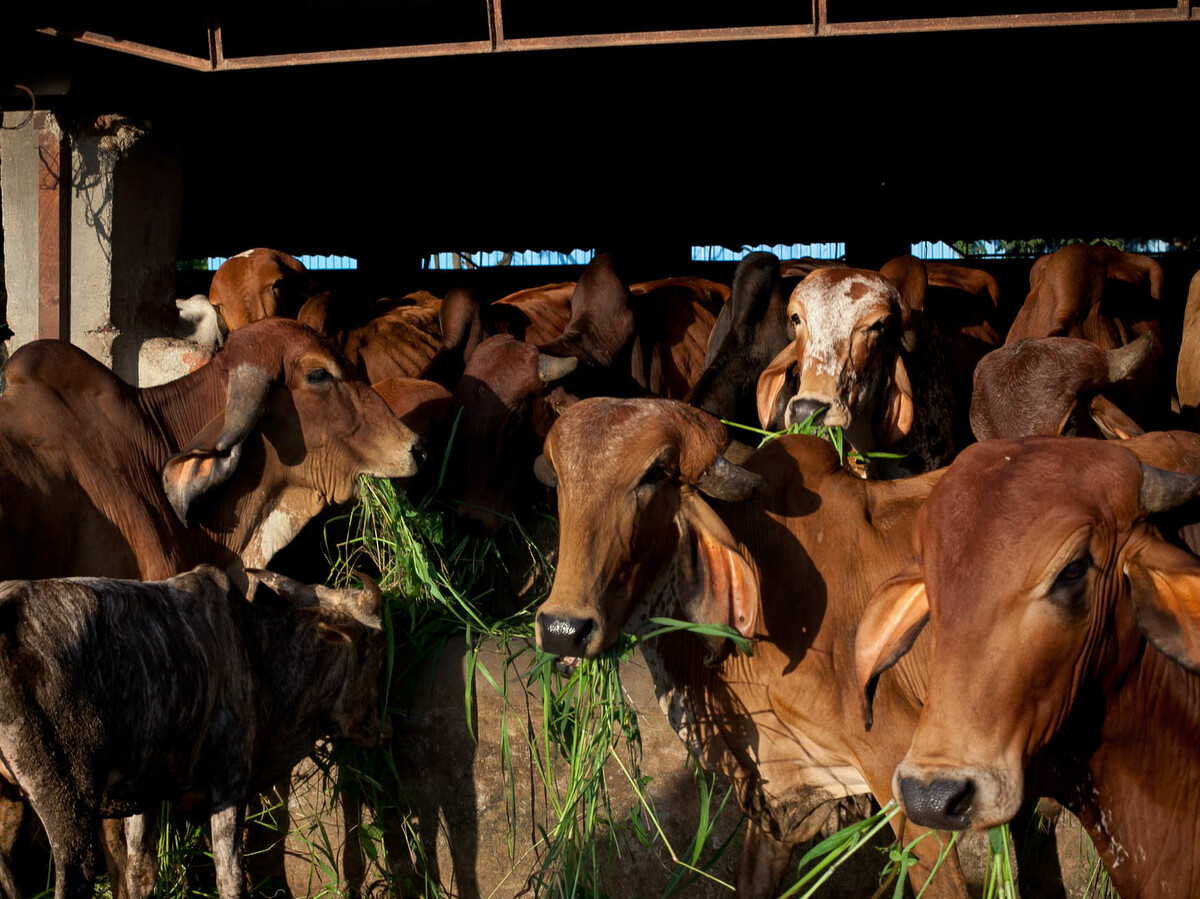 Many upper caste Hindus consider the cow holy and have long rallied to ban beef eating. Critics of the government see the new animal cruelty rules as an effort to cater to these demands.

Walk through any meat market in India, and you'll see chickens cooped up in tiny cages, squished together in their own waste. Carcasses of goats hang from hooks at butcher shops, as the next goats wait in line for their fate.

So when India's Ministry of Environment issued new rules recently about animal cruelty in livestock markets, much of it was welcome. For example, the ministry said animal markets needed to have water and fodder, veterinarian services and humane modes of transportation.

But one section of the new rules has set off a firestorm about people's right to eat what they want, state rights and religion. It also threatens the livelihoods of small farmers and raises the specter of an economic bodyblow to one of the world's largest beef exporting industries. All this comes at a time of growing number of violent attacks against beef-eating minorities by Hindu extremists.

The new rules forbid the selling of cattle, including cows, calves, bullocks and buffalos at livestock markets for slaughter. Both the buyer and the seller of these animals have to give written declarations to local authorities that the animal is not destined for slaughter. Slaughterhouses can still buy animals directly from farmers, but not in marketplaces. However, most small farmers sell to local markets because slaughterhouses are far fewer and often a great distance away from farmers. And some states don't even have slaughterhouses.

Hindu groups in India, who consider the cow holy, have long wanted to ban cow slaughter. But beef eating is more common here than many realize and it's growing. India's 180 million Muslims eat beef. Tribal communities, especially in the northeast prefer it, too. It's also common among poorer, lower caste Indians, because it's cheaper than chicken and goat.

By making the rules about cruelty rather than slaughter the government – which is headed by a right wing party with close ties to a Hindu-nationalist group - is seen as bypassing state laws. "It is saying slaughter is akin to cruelty," says Sagari Ramdas, a veterinarian who is also a member of Food Sovereignty Alliance India.

Critics of the new rules see them as banning cattle slaughter through the backdoor. A direct nationwide ban could be seen as an attack on freedom of religion, they say.

Those in support of the ban insist reading anything more than animal cruelty into the law is mischief-making. Nugehalli Jayasimha, director of Humane Society International in India sees it as a "win-win situation for the animal, the producer and the consumer." He would have preferred to see goats and chickens included in the new rules, but he says that's more difficult to implement given the sheer number of small poultry and livestock farmers.

But the rules could disrupt a carefully balanced rural economy, says Abusaleh Shariff, an economist with the US-India Policy Institute. Shariff explains that with farms becoming more mechanized, cattle are no longer used for plowing fields as much. These days, India's 300 million plus cattle are used for milk and as a safety net for farmers in case of crop failure. Many farmers eventually sell their ageing animals at livestock markets for their meat and hide. The new rules make it impossible to do so.

"Seventy percent of India lives in rural area. Out of that, 30 [percent] is of the type where if they don't sell their cattle they can fall into poverty," says Shariff. "That can be as many as 30 million families. That is no joke."

Ramdas says ironically in the name of saving the holy cow, the government could be harming it. She points out that states that currently allow cow slaughter have 80-90 percent cows in their cattle population. She predicts the new rules will mean farmers will just abandon old cows. She saw this happen with bullocks when the state of Maharashtra banned bullock slaughter in 2015. "In one year we saw a massive collapse of the bullock economy since there were no buyers," says Ramdas. "We also saw a huge increase in the number of stray animals especially in times of drought." Unable to sell older animals, farmers abandoned them.

The ripple effects of these rules will be felt far beyond the farmer, says Shariff. India accounts for 20 percent of beef exports in the world, which includes water buffalo meat, or carrabeef. The All Indian Meat and Livestock Exporters Association predicts the ban could cost 2.5 million meat industry jobs.

And according to the Indian Express, a national daily newspaper, the Progressive Dairy Farmers Association worries its business is in jeopardy. Cows live up to 25 years but give milk from 3-10 years. Forty percent of the dairy industry's income is from selling off unproductive cows to the meat and leather industry. The All India Skin and Hide Tanners and Merchants Association has been around for a century, but the mood at the organization is glum. "We are fearing that [the] supply chain will stop. There is confusion and nervousness," says its president Rafeeq Ahmed.

"I see a monitoring and surveillance system on farmers and traders," says Ramdas. "It's very Orwellian, our Animal Farm."

This fight is also feeding into India's Hindu-Muslim tensions. Many employees at slaughterhouses and tanneries are Muslims or Dalits, once called untouchables. "Their livelihood is being eliminated with no plans for rehabilitation," says Shariff.

Meanwhile, cow vigilantism has been on the rise in recent years, with mobs of upper caste Hindus attacking Muslims and Dalits for allegedly killing or eating cows. Last year, some Dalit youth skinning a dead cow in the western state of Gujarat were stripped and flogged by a group of men. A Muslim dairy farmer taking cows from the market was killed in Rajasthan in 2017. Last week a Muslim teenager was killed in a train. The attackers accused him and his brothers of carrying beef.

Several states have challenged the new rules in court for trampling their rights, violating a cattle traders' right to free trade and impinging on religious freedom. India's Supreme Court has asked the government to file a response by July 11.

Based in Kolkata, Sandip Roy is the author of the novel Don't Let Him Know.