Accessibility links
'The Sideways Effect': How A Wine-Obsessed Film Reshaped The Industry : The Salt The 2004 movie about an obsessive wine snob helped boost California's pinot noir production by 170 percent. And merlot? The wine so famously maligned in the film has finally bounced back.

'The Sideways Effect': How A Wine-Obsessed Film Reshaped The Industry

'The Sideways Effect': How A Wine-Obsessed Film Reshaped The Industry

Thin-skinned. Temperamental. In need of constant care and attention.

In the film Sideways, which earned an Academy Award in 2005 for best adapted screenplay and boosted the careers of Thomas Haden Church, Virginia Madsen and Sandra Oh, those descriptive words aptly captured the character of angst-ridden, wine-obsessed protagonist Miles Raymond, played with self-flagellating glee by Paul Giamatti.

The same words also tell the story of an equally important, but liquid, character in the film: pinot noir. A dozen years later, pinot noir has become a mainstay of the California wine industry, and winemakers credit the film with bringing deserved attention to the varietal, calling it "The Sideways Effect."

"Pinot noir production in California has increased roughly 170 percent since Sideways was released," says wine industry analyst Gabriel Froymovich of Vineyard Financial Associates, noting that total wine grape production has increased 7 to 8 percent during the same time. "I think people who were into wine saw the passion for pinot noir in the movie, decided to explore that variety a bit, and realized how lovely a wine that grape makes."

The Sideways Effect is also generally credited with depressing the market for merlot wine, based on a memorable line from the movie when Miles colorfully proclaims his disdain for the wine — the back story is that his ex-wife liked merlot — declaring, "No, if anyone orders merlot, I'm leaving. I am NOT drinking any f****** merlot!"

That line apparently echoed beyond the cineplex: In a 2009 case study, Steven Cuellar, an economics professor at Sonoma State University, found a measurable decline in merlot sales of about 2 percent from January 2005 (the film was released in October 2004) through 2008. During that same time period, pinot noir sales increased 16 percent — it's now the second-most-planted varietal in California's Sonoma County.

"Poor merlot," says winemaker Billy Dim, owner of Blendtique Wine Co. in Los Olivos, Calif. "Merlot is one of the best grapes on the planet and the movie did some damage to its reputation."

Froymovich takes some issue with blaming merlot's woes all on Sideways. He says by the time the movie came out, merlot prices were already falling — a result of growers planting too many merlot grapes after the wine became the go-to choice for many drinkers in the '90s. Some of those grapes ended up in bad, cheap bottles, hurting merlot's reputation. "Sideways came out well after this trend had taken effect and just dunked prices a bit further," he says.

Indeed, last November Froymovich did his own analysis of the Sideways Effect, based on USDA reports rather than retail sales, and found that any damage done by Miles' aversion to merlot in the film appeared to have finally run its course, resulting in increased plantings and grape prices.

"Just as water polo players pop up out of the water," notes Froymovich, "merlot prices have recovered partially and are now somewhere around the prices predicted by the long-term trend."

In fact, many California winemakers will agree that the best value on a wine list these days is a high-end merlot, which — from a quality perspective — will often outperform pinot noir and cabernet wines at the same price. 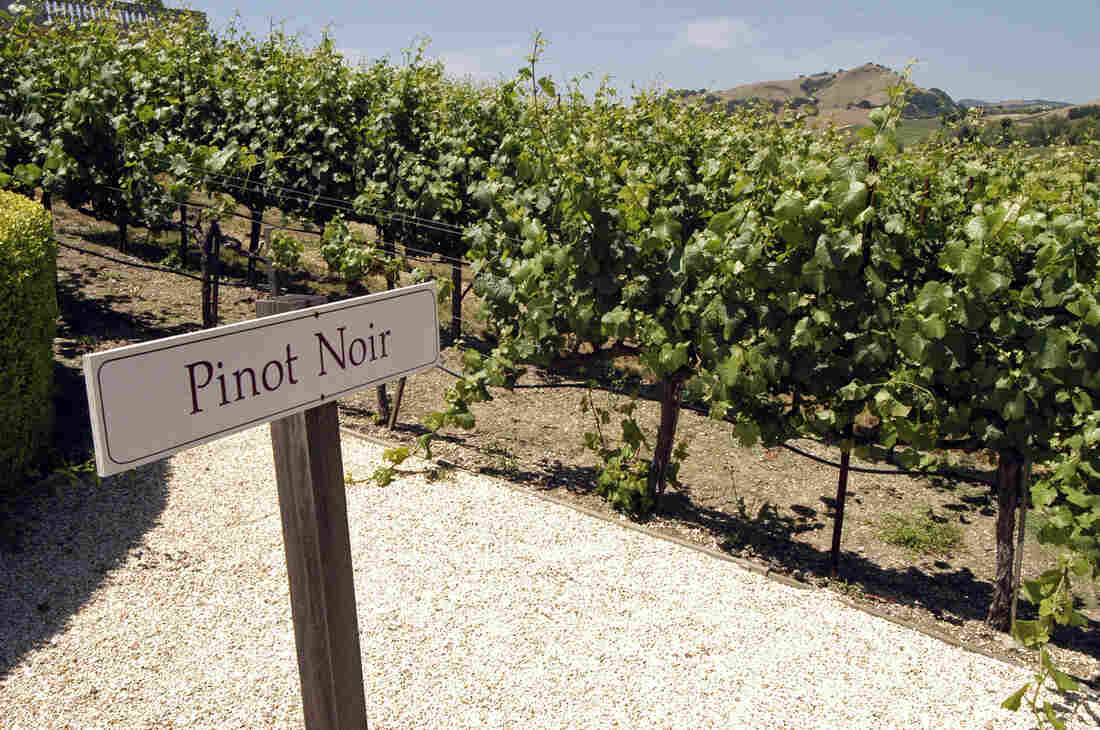 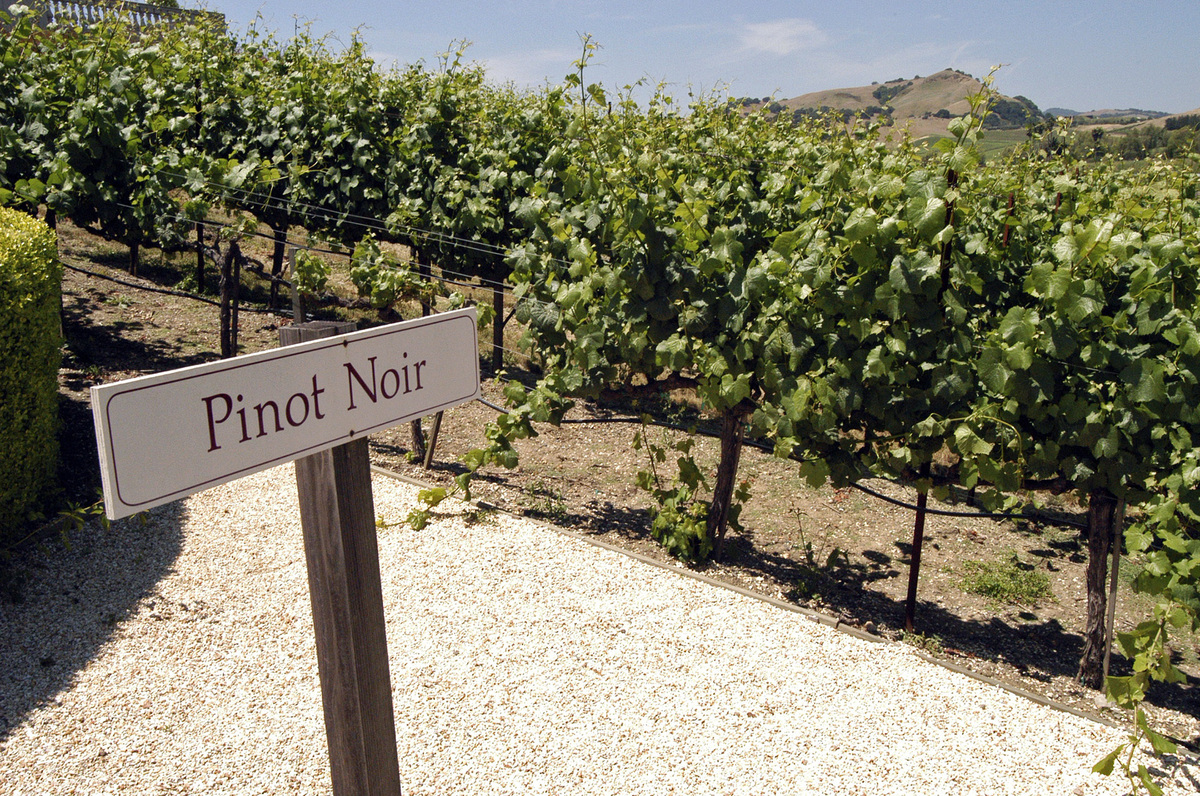 A vineyard in Napa Valley, Calif.

Even so, winemaker Dim remains partial to pinot noir. "The movie certainly highlighted it as the pinnacle of complexity. It's a remarkable variety, producing structurally lighter reds; in its elegance and subtlety lie some of the most intricate and appealing flavors," he says.

Winemakers do wax poetic when it comes to pinot noir, much as Miles does in Sideways when he opines, "It's not a survivor like cabernet, which can just grow anywhere and thrive, even when it's neglected. No, pinot needs constant care and attention. You know? And in fact it can only grow in these really specific, little, tucked-away corners of the world. And — and only the most patient and nurturing of growers can do it, really. Only somebody who really takes the time to understand pinot's potential can then coax it into its fullest expression. Then, I mean, oh, its flavors, they're just the most haunting and brilliant and thrilling and subtle and ancient on the planet."

Partial to the cooler coastal climates found along California's Central Coast, pinot noir does require more TLC than many other grapes. "Pinot noir is very delicate and likes to grow in a narrower range of environment, so there are fewer places it will thrive," says Dim. "Too much sun will blister the thin skin, and too little, it will struggle to ripen. Think of it as the Goldilocks of varieties in that it wants things to be 'just right.' "

"Like all wines, pinot noir is all about terroir," says Michael Haney, director of membership for Sonoma County Vintners, referring to the impact that the local soil, water and air can have on grapes, creating flavors that range from dark and earthy to light and mineral. "For example, in the Russian River Valley, the warm sun-filled days and cool foggy evening temperatures during the growing season encourage increased 'hang time' for grapes, leading to sophisticated multilayers of rich flavors, textures and aromas. Closer to the coast, the cooler growing temperatures produce a more subtle, elegant, stylistic approach."

Of course, many of us are less versed in the language and flavors of pinot noir, perhaps leaning more toward Miles' buddy Jack in Sideways, who pretty much thinks anything in a wineglass tastes good. Jack is the merlot — big, agreeable, full-bodied — to Miles' more challenging pinot noir.

Says Bruce Cakebread of Cakebread Cellars in Rutherford, Calif., "There's no room for error with pinot noir, because what you're drinking is 100 percent pinot grapes. With merlot, you can blend other varieties and tweak it, add a little cabernet for complexity, for instance. With pinot noir, you're playing with a thinner margin."

Still, while Cakebread, Dim and other winemakers don't think merlot should be ignored — Dim calls it "tannic, fleshy, rich, an all-around delicious day in the park" — they also say don't be intimidated by pinot noir's notorious subtleties.

"Pinot noir has that flexibility to go with a lot of different foods," says Cakebread. "There's a wide range, from heavier, bigger wines to ones that are very delicate, so consumers can go up and down that scale according to their preferences. Start trying different regions with each meal: Central Coast, Sonoma, all the way up to Oregon. It's armchair traveling with wine and food, like reading a travel book at the dinner table."