Accessibility links
Amelia Earhart's Travel Menu Relied On 3 Rules And People's Generosity : The Salt The question American women often asked Earhart was what she ate during her long flights. She said she used three rules for her in-flight menu. Once on the ground, she relied on people's generosity. 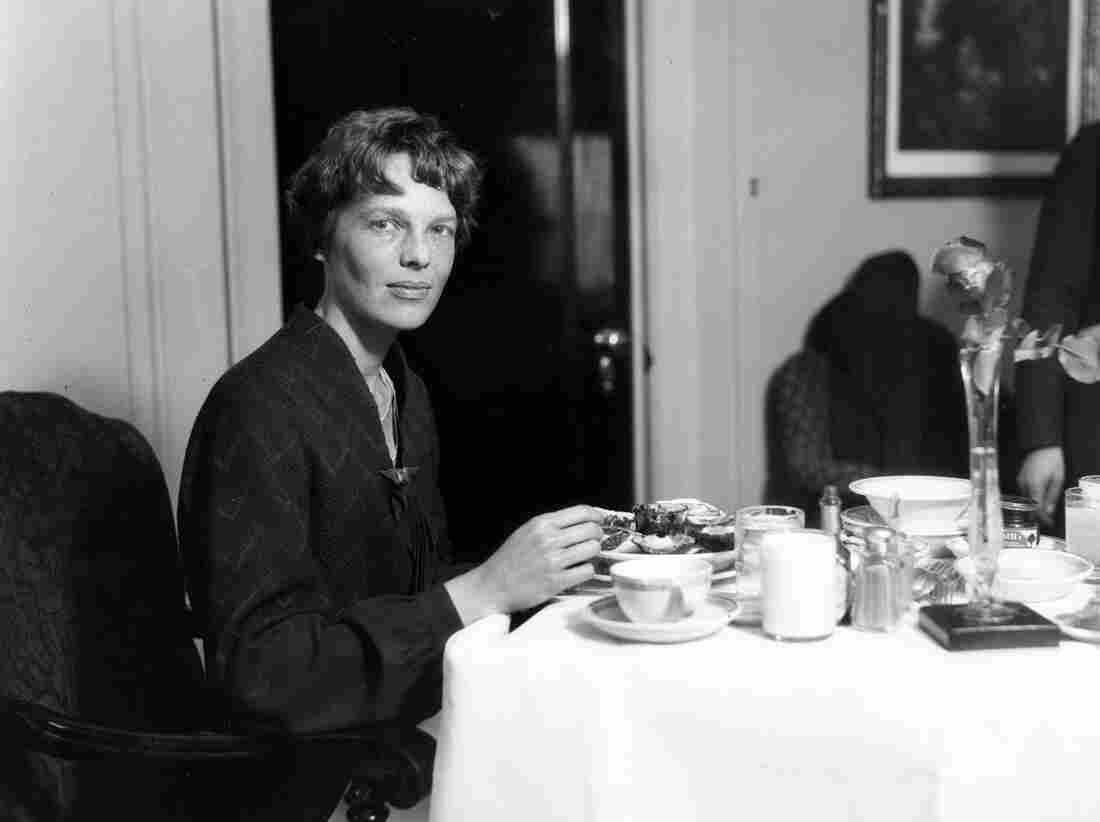 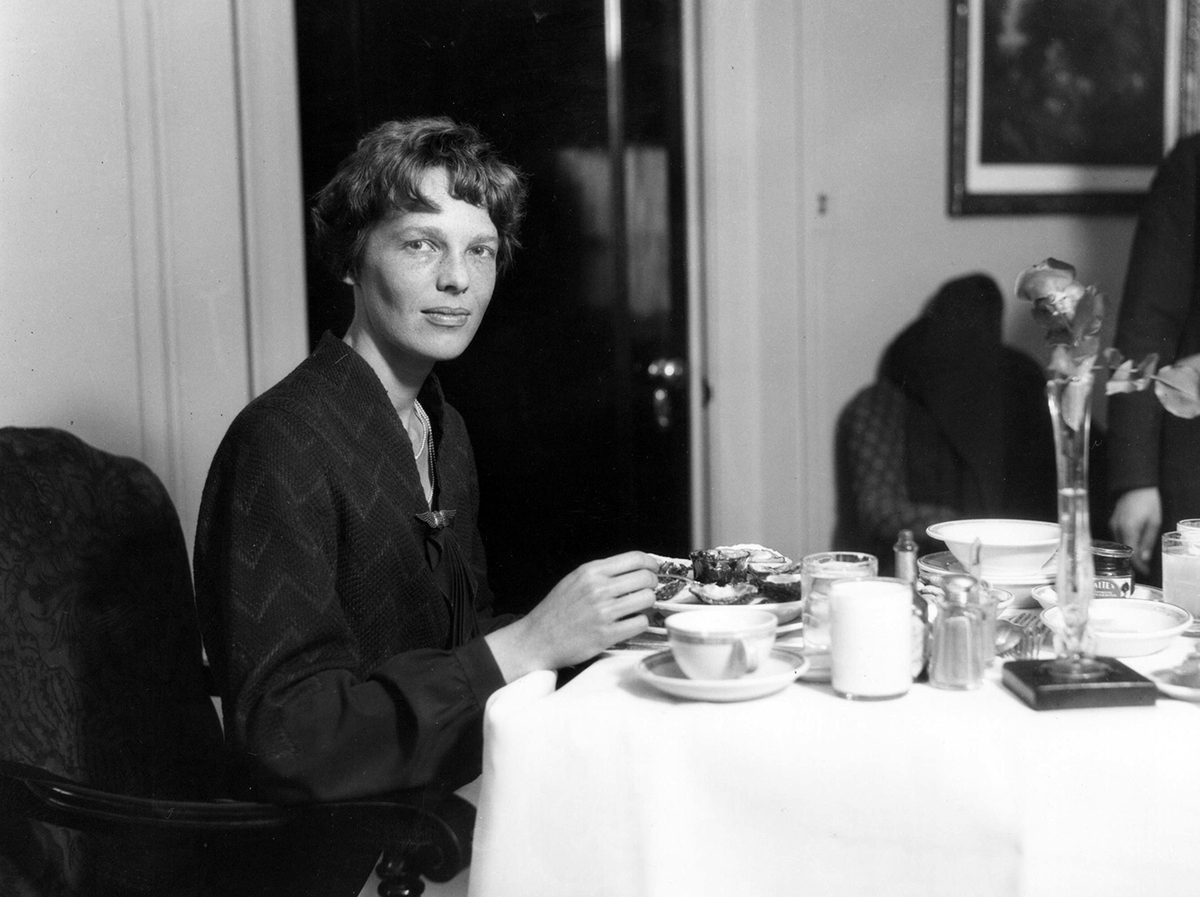 Amelia Earhart eats dinner at a Cleveland hotel. Her in-flight menu, however, was usually simple, often consisting of tomato juice and a hard-boiled egg.

A recently discovered photograph that some believe shows Amelia Earhart alive and well on an atoll in the Marshall Islands has exhumed the never really buried mystery about the pioneering aviator's disappearance after her Lockheed Electra vanished in the South Pacific on July 2, 1937.

But while feverish speculation about how she died has long dominated her story, breeding ghoulish theories including that her body was eaten by giant coconut crabs, it might be more enlightening to look at what she liked to eat on those long 15-hour solo flights across the oceans.

It was a topic of keen interest to American women at the time.

"A question I'm asked frequently concerns what a pilot eats on long flights," Earhart said in a radio interview she gave sometime between 1935 and 1937 . "This aspect of 'aeronautical housekeeping' particularly interests women."

Her answer was simple and surprising. "Tomato juice is my favorite 'working' beverage, and food too," said Earhart. "In colder weather, it may be heated and kept hot in a thermos."

When Earhart got her license in 1923, the aviation industry was in its infancy, and as she pointed out, not much scientific research had been done on the right kind of diets for pilots and passengers. It offered "a fascinating field for research," she said, but until then, her in-flight menu was determined by three rules. 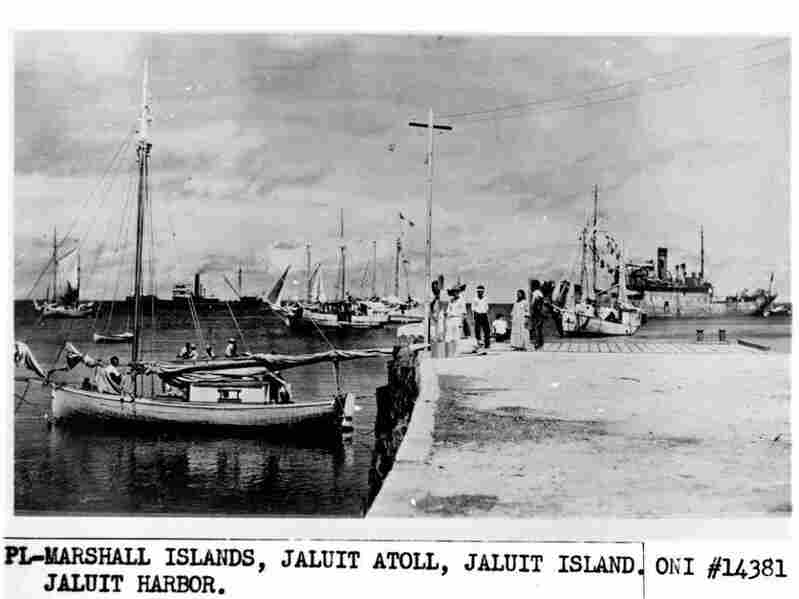 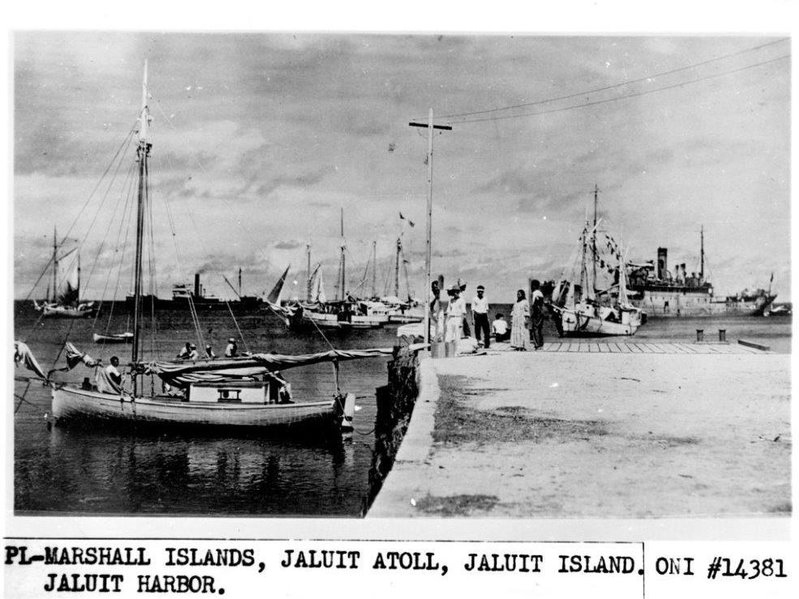 Some experts believe that this recently discovered photo shows famed aviator Amelia Earhart and her navigator, Fred Noonan, in the Marshall Islands.

The first, she said, was to be fed enough to "prevent fatigue but not enough to induce drowsiness." This balance may be difficult to achieve because it's hard to exercise in a cockpit, she said, joking, "Probably football players are easier to feed than pilots."

The second was that the food had to be something that she could eat easily — she was fond of Chinese, but chopsticks in a cockpit were a tricky affair. "Since pilots have only two hands and dozens of things to do, mealtime technique has to be simple," she explained. "So I've developed a gadget, which is really a fat ice pick. With the can between my knees, one-handed, I punch a hole in the top. A straw just fits the hole — and the rest is easy."

Tomato juice and a few squares of chocolate is what sustained her on her historic 1932 solo flight across the Atlantic, from Newfoundland to Londonderry, Northern Ireland. Sometimes a handful of raisins or a swig of cocoa from a thermos supplemented the tomato juice. And on her 1935 solo flight from Mexico City to New York, her "mainstay was a hard-boiled egg." Easy to munch on, eggs were no doubt on her mind when writing a log entry, in which she described the "little clouds" as "white scrambled eggs."

Her third rule had to do with weight. Earhart was obsessed with weight — not her own, she seemed naturally slender — but that of her aircraft. She carried as little aboard as possible — a handkerchief, a tube of cold cream, tomato juice — to allow for more fuel. As she tartly told her husband and manager, George Putnam, "my concern was simply to fly alone to Europe. Extra clothes and extra food would have been extra weight and extra worry. A pilot whose land plane falls into the Atlantic is not consoled by caviar sandwiches."

Very often, she simply relied on the generosity of people wherever she landed, and since it was often a field, she was almost always assured of a rustic welcome. In Londonderry, after touching down in a pasture, "frightening a few cows" and startling the locals, she was hurried to a farmer's peat-roofed cottage where she was plied with hot cups of tea. Once, she landed in an Illinois farm and was taken home for a chicken dinner. She enjoyed these meals. More tedious was the string of official dinners that she had to smile and small-talk her way through as she flew around the world.

Fame brought its own pressures, both from reporters, who dogged her relentlessly, and her spouse. Putnam, a publisher who divorced his first wife to marry Earhart, was in many ways the wind beneath her wings — organizing her flights and managing her numerous engagements. "They discovered a mutual passion for speed, adventure and Chinese food," writes Candace Fleming in Amelia Lost: The Life and Disappearance of Amelia Earhart. But Putnam was also a pushy publicist, and the wind beneath Earhart's wings could sometimes get uncomfortably blustery. According to one much-cited anecdote, Putnam insisted that she sign 10 autographs before sipping her morning orange juice, and another 15 before getting to her bacon and eggs. Earhart probably obliged but pushed back on other fronts in her own quiet way.

The press adored her, but things often spun out of control — most notably in what she came to cuttingly refer to as her "starvation interview." Earhart was invited to the White House by the Roosevelts, after which, a reporter asked what she thought of the food there — no doubt because of the notoriously bad fare (stuffed eggs and prunes) served by the Roosevelts' battle-ax housekeeper, a subject that had become a national joke. Earhart said she had been so busy with engagements that she had hardly eaten at the White House. To her utter mortification, this was twisted around to read that she hadn't been given enough to eat.

Horrified, Earhart wrote immediately to Eleanor Roosevelt to clarify that she "would never put out the smart ungracious stuff" that had been printed. "Perhaps you will let me raid the ice-box sometime," she ended, "not because it's necessary but because it's fun." Roosevelt wrote back assuring her that she had been the "perfect guest" and was welcome back. She added a game PS: "I shall give you a key to the ice-box next time!"

A few years later, in 1937, Earhart and navigator Fred Noonan set off on the ultimate challenge: to circle the planet, or in Earhart's elegant phrase, fly around the earth "as near its waistline as could be." They had completed 22,000 miles of their 29,000-mile journey when they prepared to take off from Lae, New Guinea, to Howland Island in the central Pacific Ocean.

But all was not well. In The Sound of Wings, biographer Mary S. Lovell notes that in the last photos taken of Earhart, she looked emaciated and drained. By this time she had been flying a month, and her diet had zigzagged between fasting and feasting — tomato juice followed by lavish banquets wherever she landed for a fuel stop and rest.

Her "physical endurance was never great," writes Lovell, and now she was underslept and had been suffering from diarrhea. Leaving behind even her favorite elephant-toe bracelet and pistol to make room for more fuel, she and Noonan boarded the Electra with a few cans of tomato juice and took off.

They never reached Howland Island. No doubt their deaths were not pleasant — whether the end came through drowning, starvation or being locked up in a Japanese prison. But Earhart's tragic death should be always balanced with her brave spirit, the fun she had and the sheer romance of her career, which was captured in what she called her "brightest gastronomic memory."

It occurred over the Pacific about midway between Honolulu and California. "It was a night of stars," Earhart recalled in her radio interview. "Above, the clouds they hung so close it seemed I could reach out from the cockpit and touch them. And there, 8,000 feet over the sea, in a very solitary world with only the stars for company I luxuriated in a cup of cocoa — altogether the strangest midnight lunch I can remember."

What a glorious way to remember her — with a cup of cocoa flying among the stars.

A previous version of this story incorrectly identified Earhart's plane as a Lockhart Electra. It was actually a Lockheed Electra. In addition, a previous version said Earhart's 1932 solo flight ended in Ireland. She landed in Northern Ireland. And we incorrectly quoted Earhart as saying in a 1930s interview that her in-flight menu must be enough to "prevent fatigue but not enough to prevent drowsiness"; she actually said it must not be enough to "induce drowsiness."