Accessibility links
What Did Thoreau Really Eat? You Might Be Surprised : The Salt There's no shortage of dietary lore about naturalist and Walden author Henry David Thoreau, so as his bicentennial birthday bash arrives, we wish to debunk these myths deliberately. 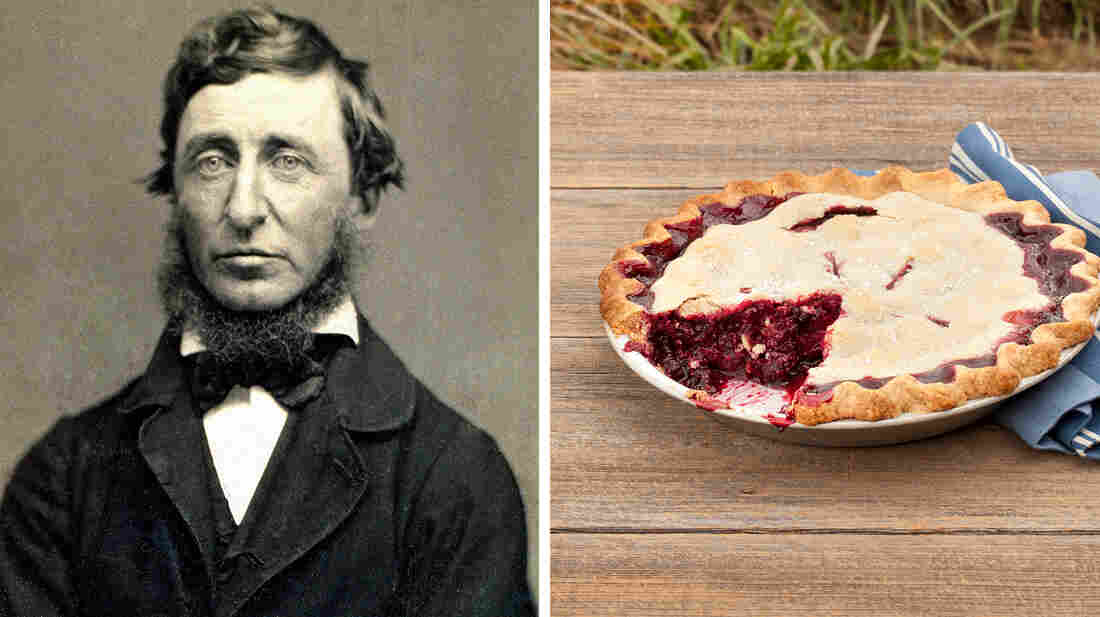 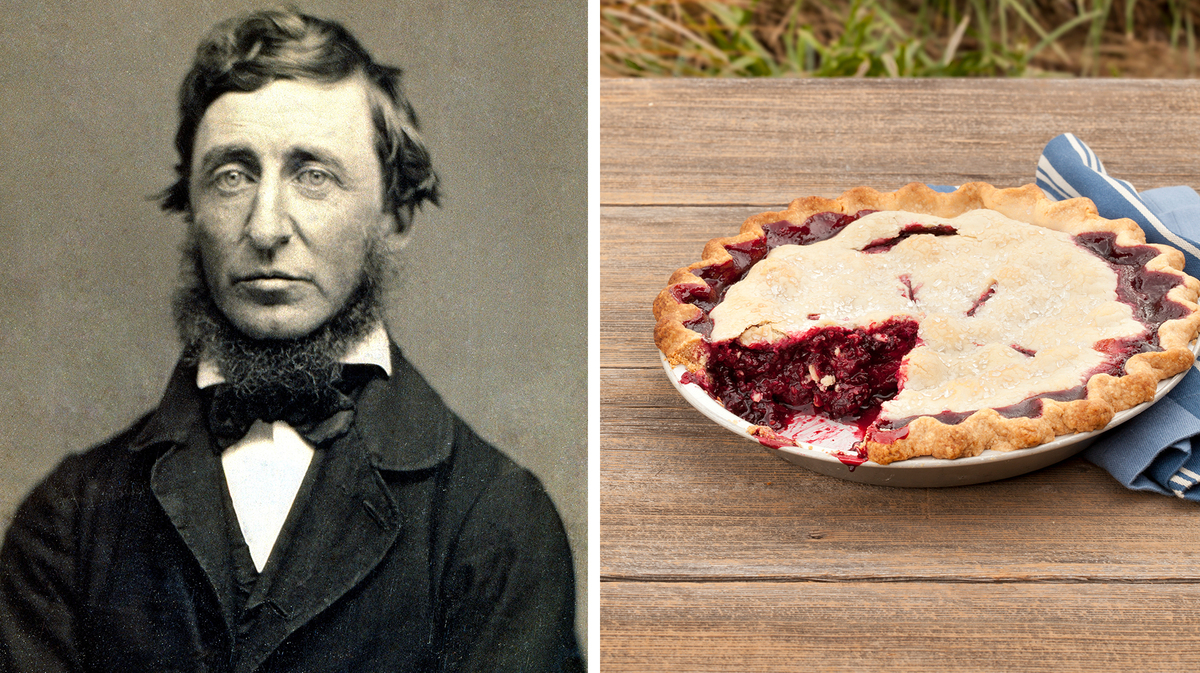 Did Thoreau steal pies off neighbors' windowsills? The myth persists.

There's no shortage of myths about Henry David Thoreau, even in this American literary superhero's hometown of Concord, Mass. In fact, my informal poll of locals reveals that it's the rare person who knows what the 19th-century naturalist grew at Walden Pond, let alone how he survived.

Apparently, even as the town celebrates Thoreau's bicentennial birthday bash, the truth about his diet is as elusive as any celebrity's.

To get the real skinny on Thoreau's eating habits, I did a little research. Then, after a quick tour of Wikipedia and CliffsNotes, I consulted biographers past and present, visited the family farm and immersed myself in Walden – Thoreau's first-hand account of his two-year staycation in Concord's exurban wilderness.

What I learned about the proto-ecologist's plant-based diet could be the next, new diet book, but, well, been there, done that. No, if my crash course taught me anything, it's this Thoreau-ism: "Rather than love, than money, than fame, give me truth."

What follows is the truth about five dietary myths, plus a celebratory recipe for a Thoreauvian punch.

Myth #1: Thoreau was a vegetarian

"Sorry, not quite," says Laura Dassow Walls, author of the new biography Henry David Thoreau: A Life. Thoreau experimented with vegetarianism as a more ethical way of living, Walls explains. He was certainly mindful, but never rigid about his diet. Like food guru Michael Pollan, Thoreau was essentially a "reducetarian" (he reduced the amount of meat he consumed), and a frugal one at that. While at Walden, he cut costs by eliminating tea, coffee, butter, milk, and exchanging his home-grown beans for rice.

"When he was with other people," Walls writes, "especially if there was no choice (like eating salted pork on camping trips), he'd go along with whatever they ate. If his hosts served meat, he'd eat some. But he strongly preferred rice and vegetables."

By today's standards, the polite vegetarian didn't have the most balanced diet, but he did have remarkable foresight. Long before Pollan penned his popular dietary prescription, "Eat food, not too much, mostly plants," Thoreau was doing just that.

It's a matter of scholarly debate whether Thoreau literally or metaphorically ate woodchuck, but Walls believes Concord's native transcendentalist did what he said he did in Walden – he ate a woodchuck.

"Once, on the suggestion of a friend," she says, "Thoreau did kill, cook and eat a woodchuck that was eating his beans. But he decided that was a lousy way to treat a woodchuck and he never did it again."

Not to mention, the Thoreau-described "musky" flavor of the woodchuck might have been less than palatable.

Thoreau was far from the first to mix raisins into homemade bread, and yet rumor has it that the frugal homesteader invented raisin bread. Biographer Walter Harding suspected the rumor was inadvertently started by Concord housewives, "who delighted in being shocked by Thoreau's antics," and was surely perpetuated by a 1943 Ladies Home Journal article that deemed "the one-time nature hound" the father of this culinary invention.

After discovering a raisin bread recipe in a 1671 British cookbook, Harding eventually set the record straight in Thoreau Society Bulletin. Apparently raisin bread, aka plum cake, was commonplace as early as Elizabethan England.

And yet, if you ask OK Google "Who invented raisin bread?" she'll tell you it was Henry David Thoreau. Go figure.

There's not a shred of evidence that Thoreau stole pies off neighbors' windowsills, but the myth persists. Although the oft-maligned introvert may have had a sweet tooth, he had no reason to steal what his mother was only too happy to bake for her beloved son. "After dinner," Walls explains, "his mother would pack up some food to send home with him to Walden, and you can bet she put in some pies."

Of course, there's no proof that Thoreau didn't steal pies, but, at this late date, who wants to dispel a mother's love story?

There's no dispute that Thoreau battled bouts of tuberculosis, but, one modern-day medical theory suggests that Thoreau was responsible for his death by TB. More specifically, the late Benjamin Sandler, MD, who specialized in preventive nutrition, theorized that Thoreau's high-carb, low-protein "Walden Diet" made him especially susceptible to the lung infection that abruptly ended his life at age 44.

In fact, Thoreau contracted tuberculosis in 1835, a decade before he decamped to Walden. In addition, according to Thoreau scholar Corinne H. Smith, author of Westward I Go Free, "TB then was like cancer is now. It was the biggest killer [around]. Whole families seemed to get it, but no one knew it was communicable." It killed Thoreau's grandfather and older sister, and would likely have killed his brother if he didn't die of tetanus.

What's more, until his dying days, Thoreau was the picture of health. "When Thoreau was well," Walls says, "his friends marveled at his strength and stamina. He could outwalk them all, skate 30 miles in a day, run straight up mountainsides ... If he hadn't been [so] physically active, he would likely have died much younger."

Thoreau blamed his TB on the cold, rainy weather. But, as Smith notes, Thoreau's friend Bronson Alcott caught a bad bug at a teacher's conference and passed it on to Thoreau around the same time. "In a way," Smith chuckles, "you could blame Bronson." 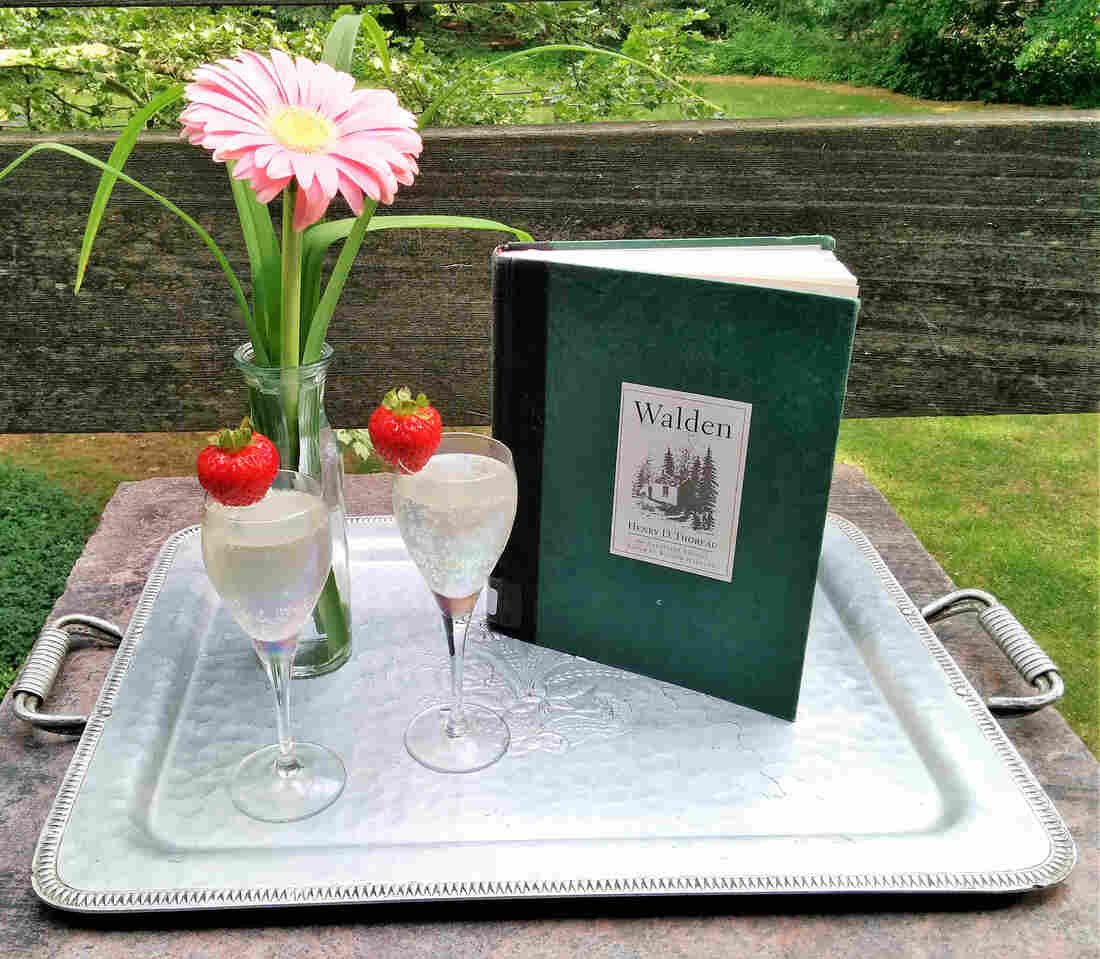 The Rhubarb Shrub a is Colonial-day drink made from a syrup of rhubarb, vinegar and sugar. Jean Fain for NPR hide caption 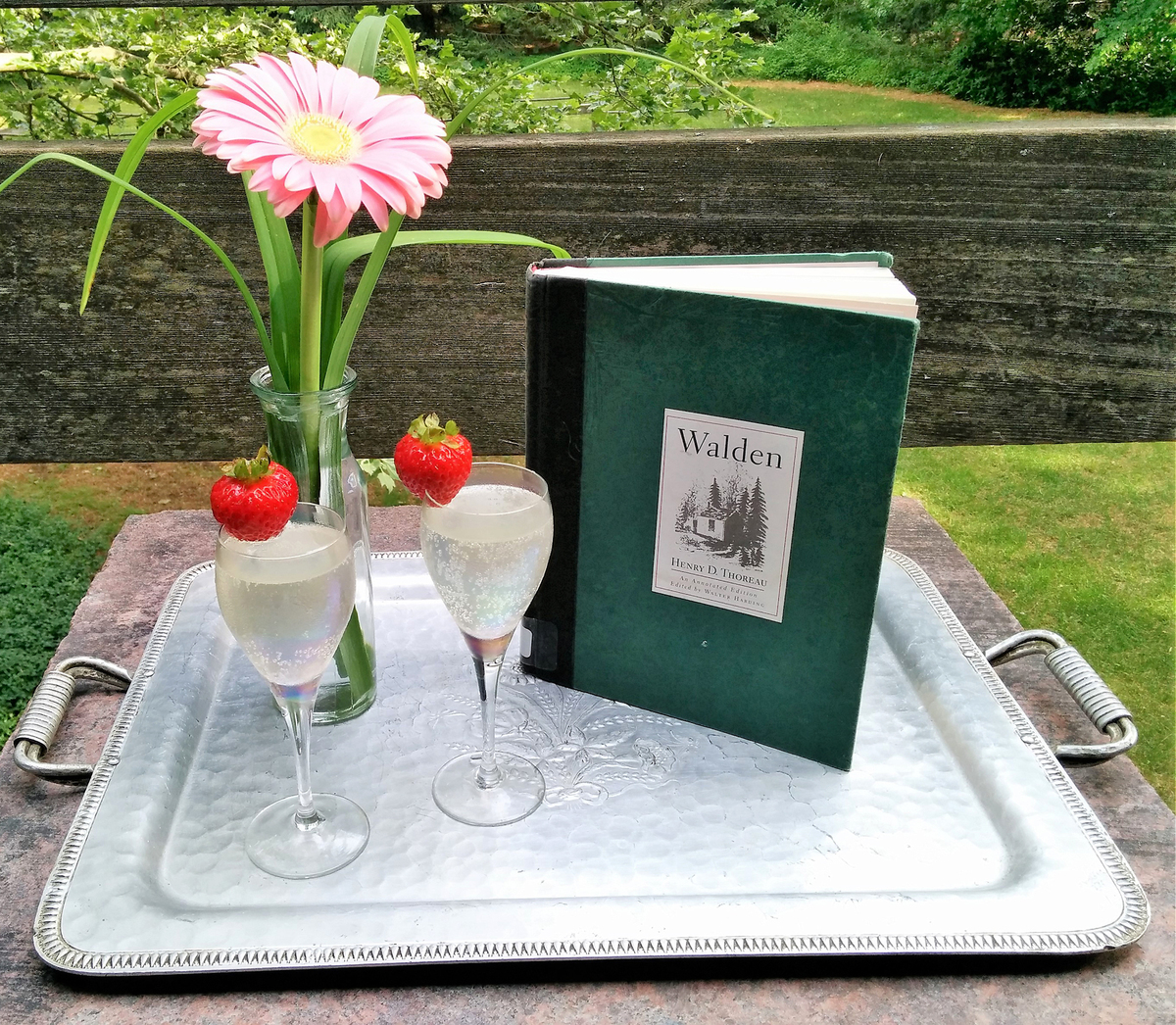 The Rhubarb Shrub a is Colonial-day drink made from a syrup of rhubarb, vinegar and sugar.

There are more dietary truths to tell, but there's also a bicentennial to celebrate. To that end, here's a celebratory recipe for Thoreau Farm's Rhubarb Shrub, a Colonial-day drink made from a syrup of rhubarb, vinegar and sugar. It's a little bland for my taste, but maybe that's the point. Thoreau's diet was simplicity itself. Still, if I make it again, I'll be sure to add strawberries.

Thoreau may have been a teetotaler, but feel free to spike this Thoreauvian punch with brandy or rum and raise a glass to Henry David. Cheers!

Put the sliced rhubarb into a pan with 2 cups of water. Bring to a boil and simmer until tender, about 15 minutes. Remove from heat; add the sugar, vinegar and spices, stirring well. Strain thru a sieve, saving juice and pulp separately*. Add remaining water. There will be about 4-1/2 cups rhubarb juice. Chill. When ready to serve, pour juice into punch bowl with ice and the seltzer.

(*Pulp may be served later as a dessert with a dab of whipped cream on top.)

Jean Fain is a Harvard Medical School-affiliated psychotherapist and the author of "The Self-Compassion Diet."