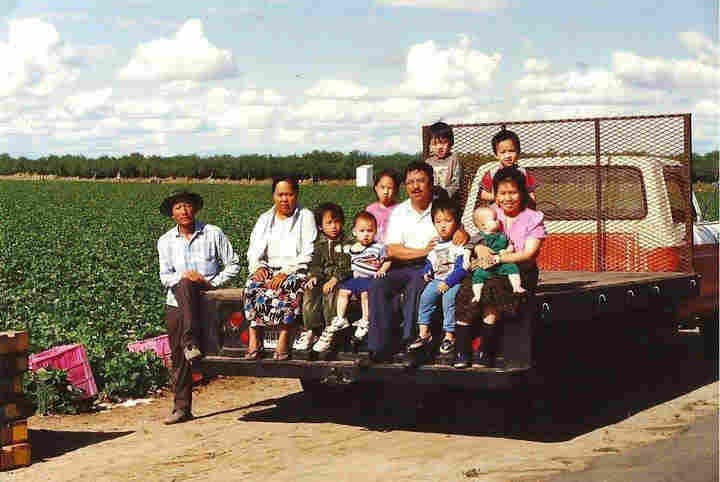 A family photo from the 1990s shows the Yang family sitting on a truck on their farm. Courtesy of Asian Pacific Islander Forward Movement hide caption 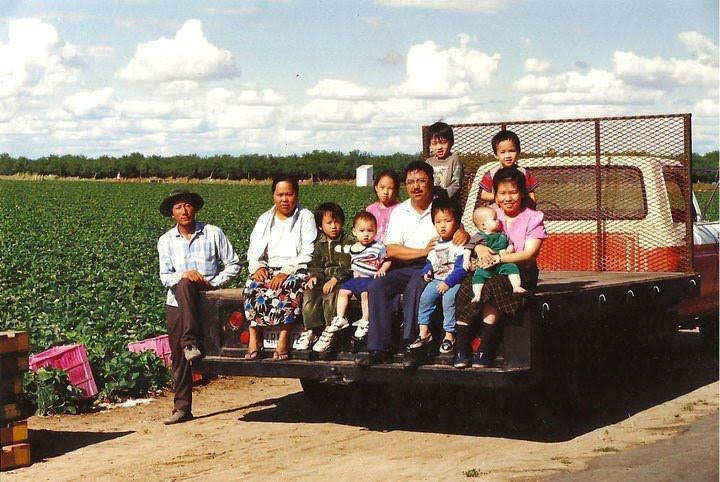 A family photo from the 1990s shows the Yang family sitting on a truck on their farm.

Growing up, Youa Yang did not envision himself taking over his family's business. His parents were Hmong refugees from Laos who arrived in Fresno, Calif., in the late 1980s and settled down to become farmers. He went to college for economics and mathematics and found himself knee-deep in the finance industry immediately after graduating.

But, while doing volunteer work, Yang crossed paths with Kyle Tsukahira, a program manager at Asian Pacific Islander Forward Movement (APIFM), a nonprofit dedicated to bringing culturally relevant produce to the Asian enclaves of Los Angeles. It was APIFM that helped Yang see that his family farm had a lot more potential to grow – and gave him the tools to do it, like counseling in marketing, how to obtain organic certifications and the latest farming policies.

Then Yang went from client to consultant. He's fluent in Hmong and he helps translate the organization's workshops for his fellow Hmong farmers in the Central Valley.

"It made me think about what I really wanted to do in life and the blessings that I had," he says. "What I realized is that my parents are farming in Fresno and that they could use my talents and abilities."

Yang's family farm grows a wide variety of produce catering specifically to an Asian palate. On a late spring day at the farm, one might find water spinach, with hollow stems that soak in the flavor of the garlic, and yam leaves, which are best gently sautéed with a dash of salt. There's bitter melon, which pairs well with black beans, and daikon roots, which are ideally pickled with a bit of white vinegar and sugar. The well-known bok choy is also available and is especially tasty when married to garlic, with a bit of salt and pepper.

In addition to farmers' markets across California, Yang's produce is distributed through Roots, APIFM's Los Angeles-based community-supported agriculture program, which he says has generated significant extra revenue for his farm and provided much-needed marketing assistance. 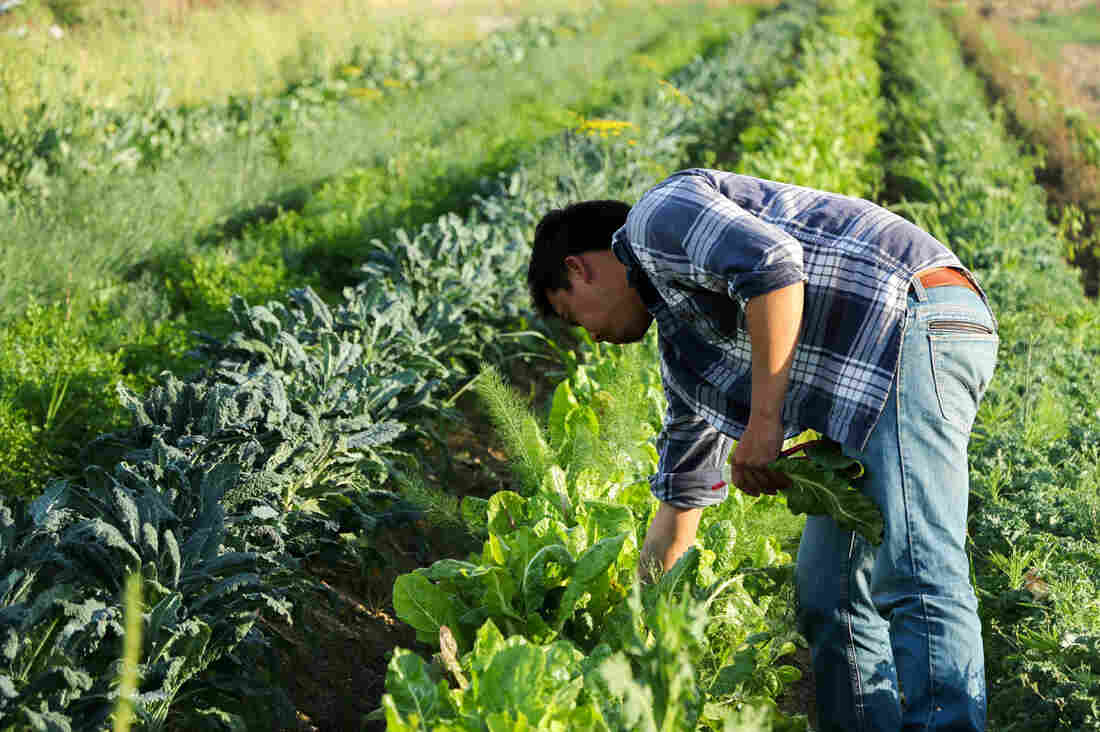 A farmer checks on produce at Padao Farms, a 15-acre plot run by the Yang family in Fresno, Calif., that specializes in Asian greens. Courtesy of Asian Pacific Islander Forward Movement hide caption 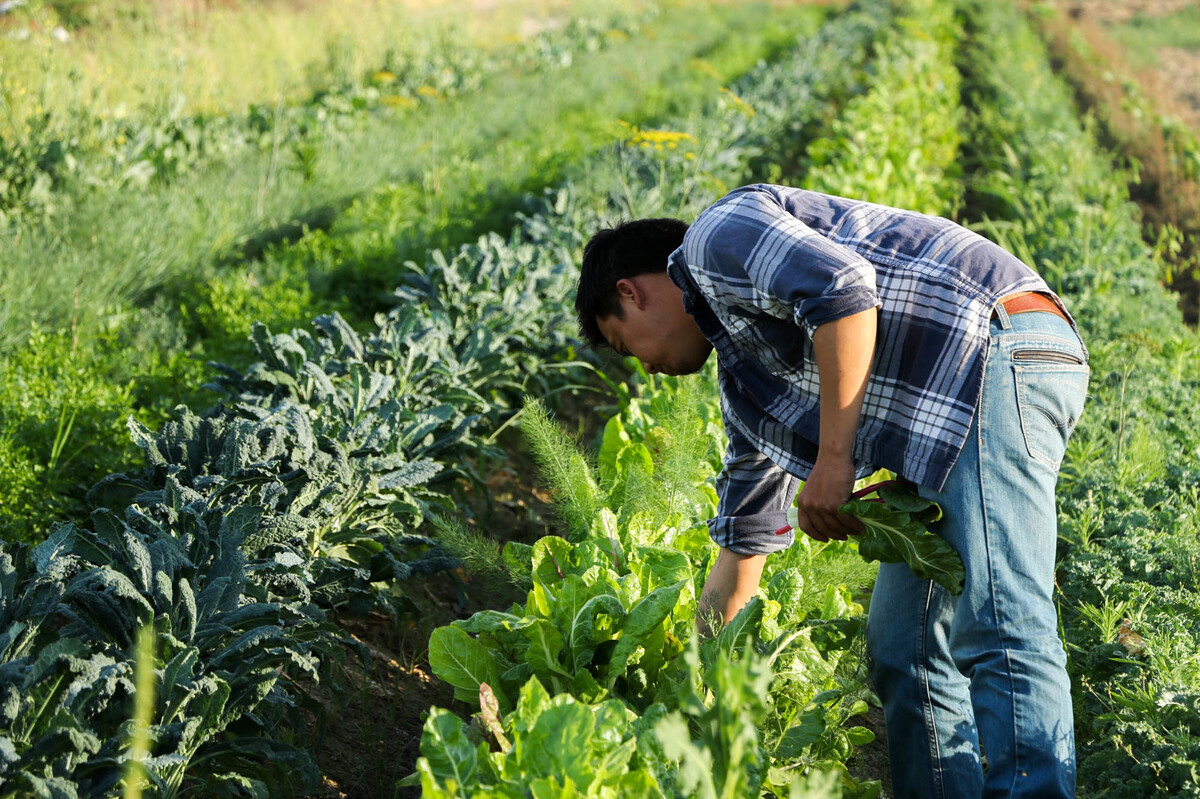 A farmer checks on produce at Padao Farms, a 15-acre plot run by the Yang family in Fresno, Calif., that specializes in Asian greens.

"What is most difficult about farmers' market for farmers is not only the number [of] trips that it takes, but that they're not guaranteed to sell [their produce] or make the trip worth it," says APIFM's Tsukahira.

Founded in 2013, APIFM works directly with Asian farmers like Yang across California to provide local and healthy food to the Asian and Pacific Islander population in Los Angeles.

According to the 2010 census, the greater Los Angeles metropolitan area has the highest concentration of Asian-Americans in the United States. Over the years, grocery store chains have popped up to serve this population. For Chinese-Americans, that's 99 Ranch and 168 Market. Mitsuwa, Nijiya and Marukai markets, which are three separate market chains, cater to Japanese-Americans, and Galleria and Zion markets target Korean-Americans.

"There are more liquor stores and fast food restaurants than grocery stores, and many community members have to take public transit for about an hour to get to a supermarket," Paul Nguyen, a program coordinator at APIFM, notes of the area.

And for the communities that do have access to a supermarket selling Asian greens, the issue is transparency and localism. While conventional Asian grocery stores are decent at labeling the countries from which they source, the exact suppliers are not divulged and the geographic range is international — anywhere from Mexico to China to Vietnam.

"The thing is that we don't know where they're getting their produce from," Tsukahira says, adding, "What we're trying to do is work with small, local farmers in California."

Over the years, APIFM has worked with dozens of farms through its workshops. Additionally, it works directly with seven farms to distribute produce in the greater Los Angeles area. It's a small operation and the group also dedicates a lot of attention to fostering the Hmong farming community in Frenso County. According to a 2007 survey, there are roughly 1,500 small farms operated by southeast Asian farmers in Fresno County; about 900 of those are Hmong. They're part of a wave of immigrants who came to the United States in the 1980s and later because of persecution following the Vietnam War.

"A lot of them are first-generation immigrants and they're not informed about the rules and regulations and how to get into the farmers' markets," Nguyen says. "We work with them to help get their story out." 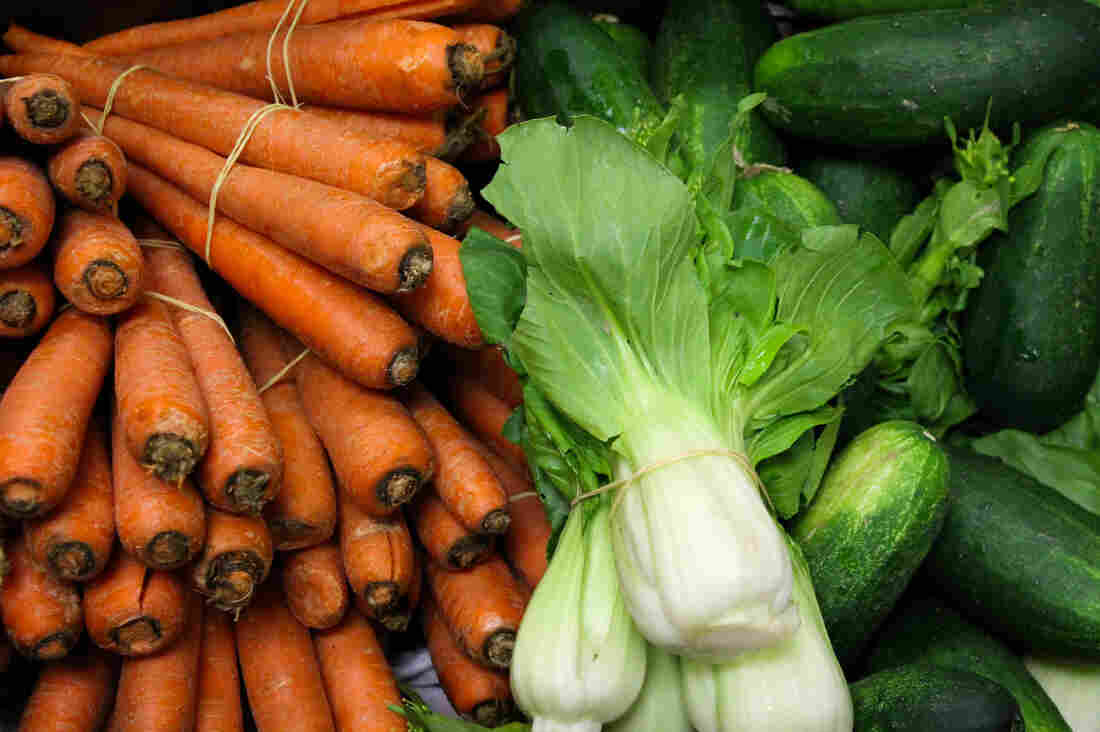 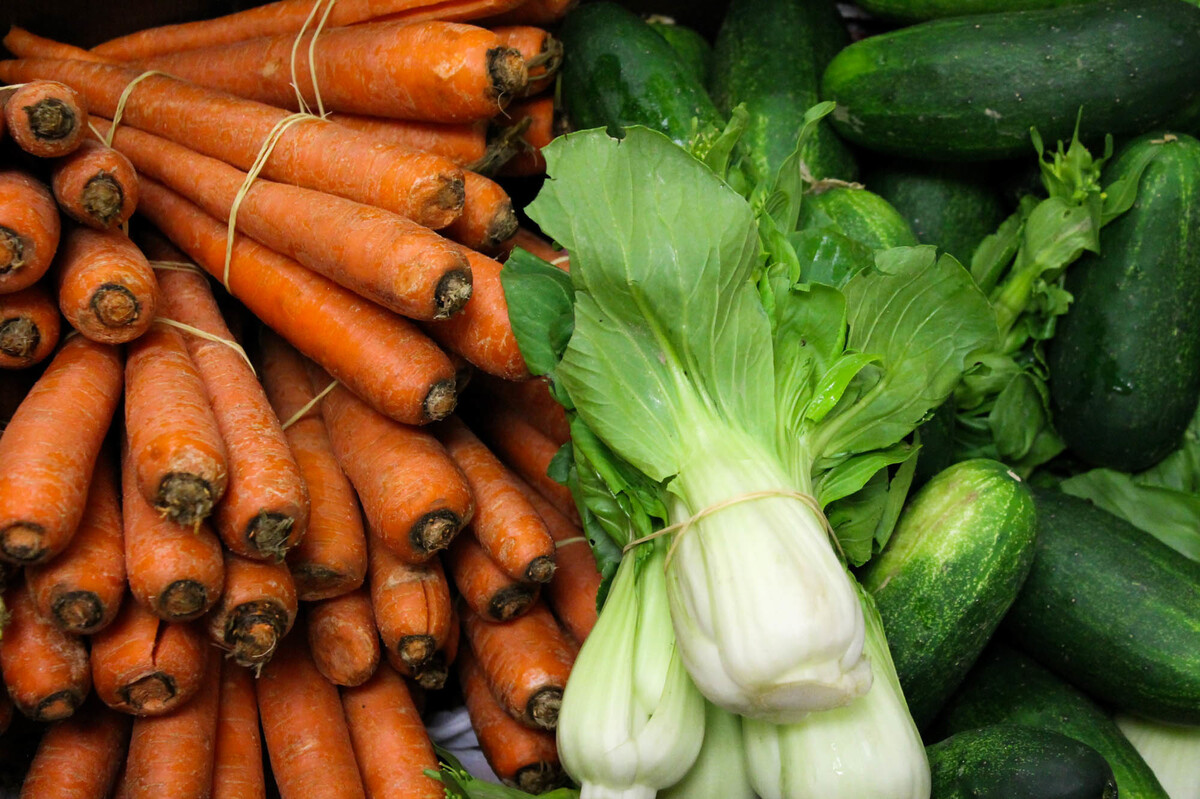 The irrigation workshop, Yang noted, was one of the most helpful and generated the most interest from farmers.

"They taught us the best time to water so you don't get charged as much. And it helped me schedule my water more effectively," Yang says. "The other farmers were really interested because they could finally see why the bills were so high."

Aside from helping farmers with logistics, the ultimate goal for APIFM is to create a food hub — a distribution network in Los Angeles that will provide traditional Asian produce to restaurants, schools, hospitals, community institutions and stores, so that small farmers won't have to make the cumbersome trip into the city on a weekly basis. Even as generations continue to become more Americanized, the produce is a way to maintain cultural relevancy and diversity.

APIFM is also gearing up to start a farmer incubation program, in which the organization will purchase land, obtain all the proper certifications for organic labeling and then lease plots out to the farmers.

On the consumer end, APIFM is offering subsidized vegetables and fruits for low-income families, and cooking and nutrition workshops at affordable housing units.

The focus, ultimately, is the Asian-American community, which makes up 14.7 percent of the metropolitan Los Angeles population. Leafy greens for sautéing, crisp daikon roots for pickling, and mustard greens for salting are an integral part of the population's cultural identity. Yang says his biggest concern isn't a lack of demand for Asian produce, but a lack of farmers to feed that demand.

"We've gotten to a point where people are so disconnected [from] their food and their groceries. With that said, it's one of my favorite things to meet the mothers that show up for our produce," Yang says. "They feed their families with recipes that they grew up with. And it's a huge benefit for them to have access to a price that they're used to."