Accessibility links
No Offense, American Bees, But Your Sperm Isn't Cutting It : The Salt U.S. bees are in trouble, and one of the major threats is a deadly parasite called varroa mite. So researchers are importing sperm from European bees resistant to mites to toughen up America's stock. 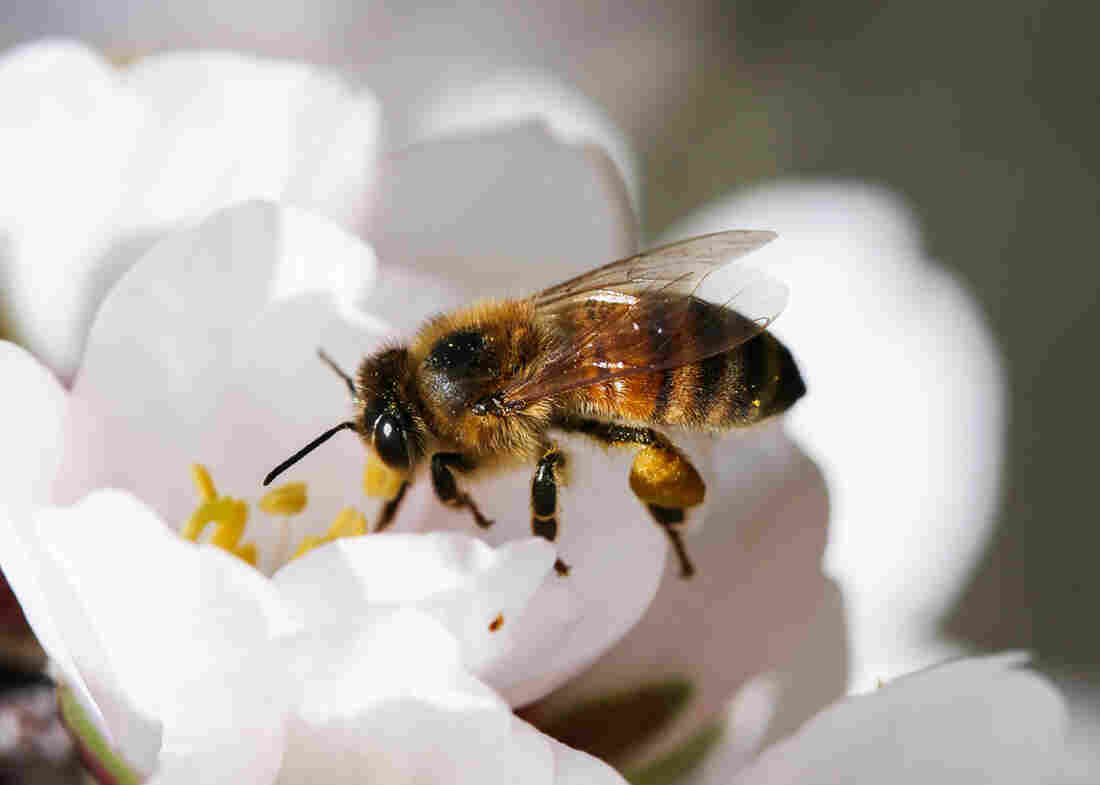 With an American honeybee queen for a mother and a European honeybee drone for a father, this worker bee has a level of genetic diversity unseen in the U.S. for decades. Researchers at Washington State University hope a deeper gene pool will give a new generation of honeybees much-needed genetic traits, like resistance to varroa mites. The parasite kills a third of American honeybees each year. Megan Asche/Courtesy of Washington State University hide caption 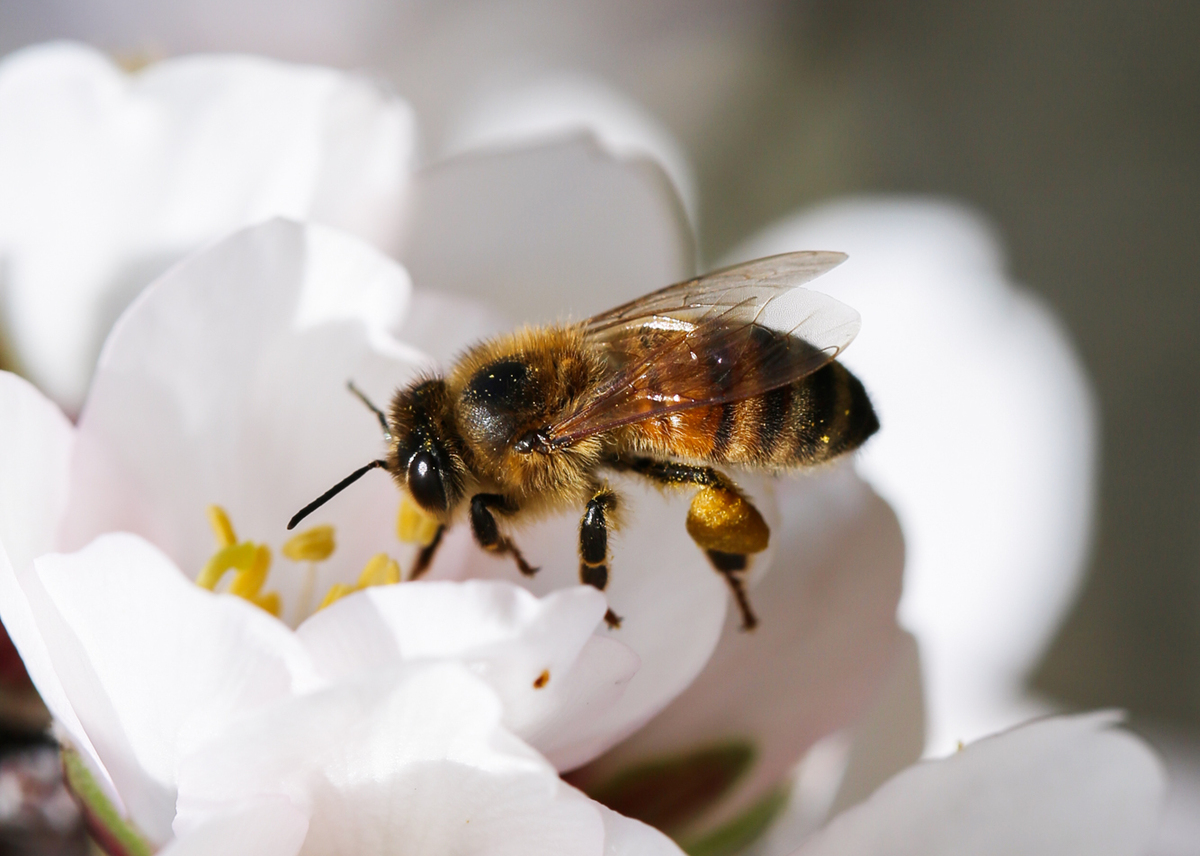 With an American honeybee queen for a mother and a European honeybee drone for a father, this worker bee has a level of genetic diversity unseen in the U.S. for decades. Researchers at Washington State University hope a deeper gene pool will give a new generation of honeybees much-needed genetic traits, like resistance to varroa mites. The parasite kills a third of American honeybees each year.

Editor's note: This story is for mature bees only.

Seducing a honeybee drone – one of the males in a colony whose only job is to mate with the queen – is not too difficult. They don't have stingers, so you just pick one up. Apply a little pressure to the abdomen and the drone gets randy, blood rushing to his endophallus, bringing him to climax.

"They're really accommodating," says Susan Cobey, a honeybee breeder on Whidbey Island, Wash. "One ejaculate is about 1 microliter, and it takes 10 microliters to artificially inseminate a queen."

Since 2008, Cobey has done her share of bee abdomen rubbing as part of a research team from Washington State University traveling through Europe and Asia. They've collected sperm from native honeybees in Italy, Slovenia, Germany, Kazakhstan and the Republic of Georgia – countries where honeybees have favorable genetic traits, like resistance to the varroa mite. The deadly parasite has been cited as a major factor in bee deaths, along with genetics, poor nutrition and pesticide exposure, according to a major report from the USDA and EPA in 2013.

Varroa mites are an invasive parasite from Asia that sucks hemolymph (bee blood) from adult and larval honeybees, weakening their immune systems and transmitting deadly pathogens, like bent wing virus. If left untreated, a varroa infestation can kill a colony in one year. First detected on U.S. soil in 1987, varroa has spread quickly, infesting upwards of 50 percent of American hives. Last year, 33 percent of U.S. honeybee hives died. That's troubling for the plight of honeybees and U.S. agriculture, which relies on pollinators to produce one-third of the food we eat.

The buzz on American bees: too much inbreeding

According to the WSU research team, the root cause of the U.S. honeybees' vulnerability to varroa is a dwindling gene pool that has left them short on genetic traits that help honeybees resist varroa elsewhere in the world.

"Honeybees aren't native to America," Cobey says. "We brought them here. But the U.S. closed its borders to live honeybee imports in 1922, and our honeybee population has been interbreeding ever since."

WSU has monitored the genetic diversity of honeybee queens in Washington and California since 1994, showing a steady decline. Dr. Brandon Hopkins, the team's expert in freezing and thawing bee sperm, likens honeybee breeding to a poker game played with an incomplete deck of cards. "There's no way to get a four-of-a-kind if there aren't four aces in the deck," Hopkins says. 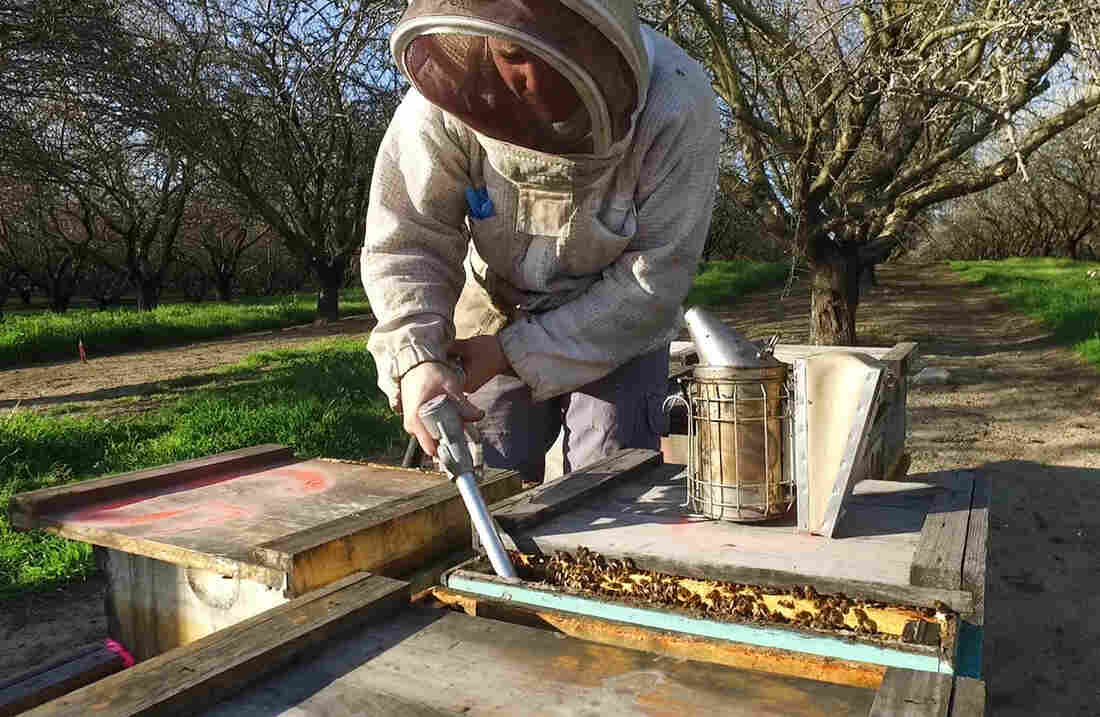 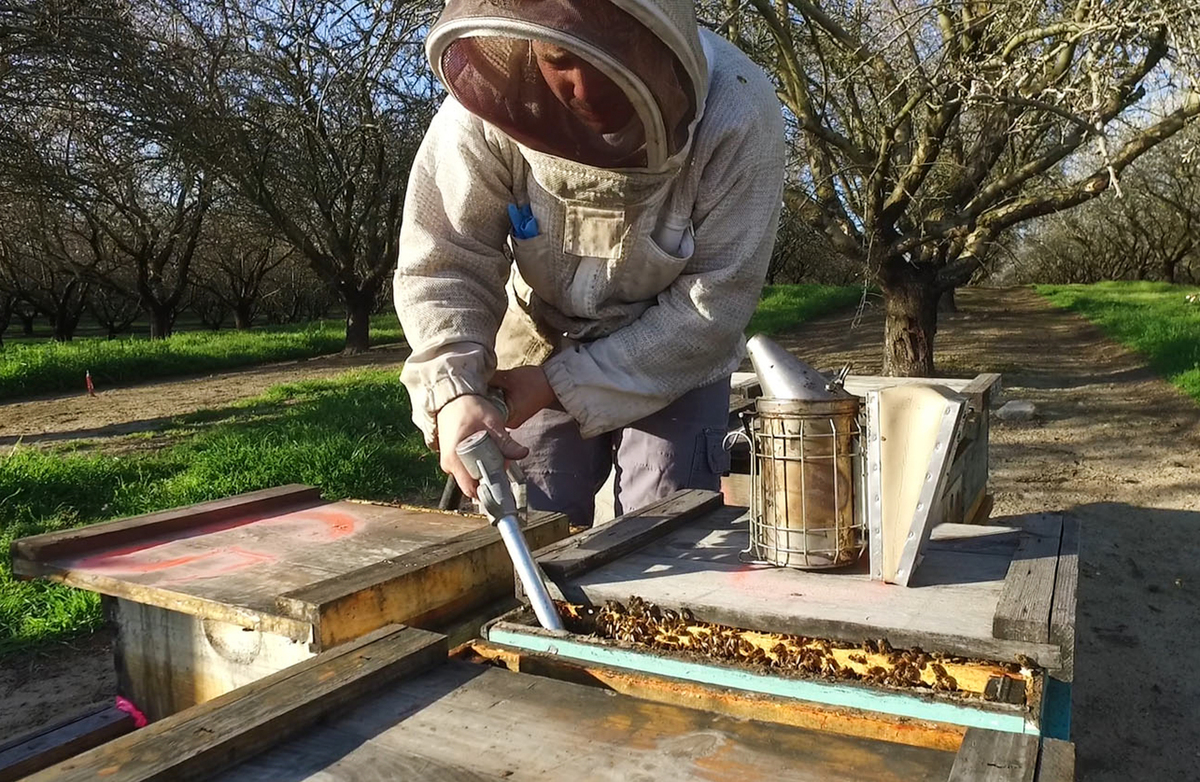 Brandon Hopkins, a cryopreservation specialist, works in Washington State University's fruit tree orchard in Pullman, Wash. As a doctoral student at WSU, Hopkins perfected a system of freezing and thawing bee semen for use in artificial insemination.

The imported semen has restacked the deck. WSU's crossbred honeybees already test positive at a higher level of genetic diversity than the first queens tested in 1994. "This doesn't mean they are superior in performance to the other bees," Hopkins says. "It means we have a better chance of finding rare and unique traits."

It used to be that honeybee breeders selected for bees that produced more honey, grew more populous hives, and were gentler to handle. Now, they want honeybees that can resist varroa. Without it, beekeepers must rely on costly "miticide" treatments to control varroa.

However, studies suggest the mites are developing resistance to pesticides and the chemicals may be harming honeybees, compounding the problem of widespread bee deaths known as Colony Collapse Disorder.

A problem that blooms in almond orchards

Pollination services like Olson's Honeybees are the cornerstone of a $15 billion segment of U.S. agriculture. A hefty share of that is the almond industry, whose trees are completely reliant on honeybees for pollination. It's also the industry most susceptible to fallout from the varroa epidemic in bees: California's almond groves serve as an incubator for the growth and spread of varroa mites across the United States.

"There are 800,000 acres of almonds in California," says Patrick Heitkam, owner of Heitkam's Honey Bees in Orland, Calif. "It takes two hives to pollinate one acre, so that's a need for 1.6 million hives. There are only 500,000 hives in the state, so the rest are trucked in from around the country."

Almond trees bloom in January, a time of the year when most honeybee varieties are dormant in their hives. But an Italian species of honeybee, Apis mellifera linguistica, which evolved in the warm Mediterranean climate, is active when the first almond blossom pops in late-January, making them the most popular variety in the U.S.

The trouble is, Italian honeybees are extremely susceptible to varroa mites, because their hives grow so big, so fast and so early.

Like the WSU team, Danka has also looked to the Old World for an answer to varroa mites. Between 1994 and 2000, he traveled to the Russian far east, where a local honeybee, Apis mellifera, has developed resistance to varroa. They are descended from European honeybees brought by Russian settlers traveling the Trans-Siberian Railway at the turn of the 20th century. The journey inadvertently transplanted the honeybees into the native range of varroa mites in east Asia, where they evolved resistance to the pest.

These Russian bees groom themselves, biting and crushing the mites. They also have a prevalent genetic trait called varroa sensitive hygiene (VSH), aborting larval honeybees infested with mites and removing them from the hive before the parasite can spread.

Danka brought back 360 queens, the basis for what is now a robust Russian honeybee population in the United States. While their prowess as mite biters continues, Russian honeybees haven't proven up to task as commercial pollinators. The queens are used to long Russian winters, so they are slow at building up their hives, meaning only a small number are ready to fly in the almond groves come January.

Survival of the fittest bees

Still, Danka says the Russian honeybee offers proof that a European subspecies can develop varroa mite resistance through natural selection. That evolutionary process is interrupted in commercial beehives, because of the "prophylactic use of miticides," Danka says. "We're maintaining varroa-susceptible bees through chemistry. If we took away all those pesticide treatments – and to be clear, I'm not advocating for this – the results would be horrific. But in a rather short period of time, only varroa-resistant bees would be left." And those bees could be the basis of a new population.

Matthew Shakespear, the commercial honeybee keeper in Yakima, Wash., would rather not spend money treating his hives for varroa mites. Starting last year, he diversified his business to include hives of Carniolan honeybees, Apis mellifera carnica, a subspecies native to Eastern Europe.

The queens he bought were the great-great-great granddaughters of a honeybee drone that Susan Cobey found in the mountains of Slovenia.

"Maybe these new genetics can deal with the varroa mites naturally, rather than having to rely on chemicals," Shakespear says. "It's time to start widening our gene pool."

Ryan Bell is a journalist based in Washington State. Find him on Twitter @ryanbellwriter. This story was produced in collaboration with the Food & Environment Reporting Network, an independent, nonprofit news organization.