Accessibility links
More Than Bread: Sourdough As a Window Into The Microbiome : The Salt Home bakers in the U.S., Europe and some other countries have volunteered their sourdough starters to a team of American scientists who want to unravel the microbial secrets of sourdough. 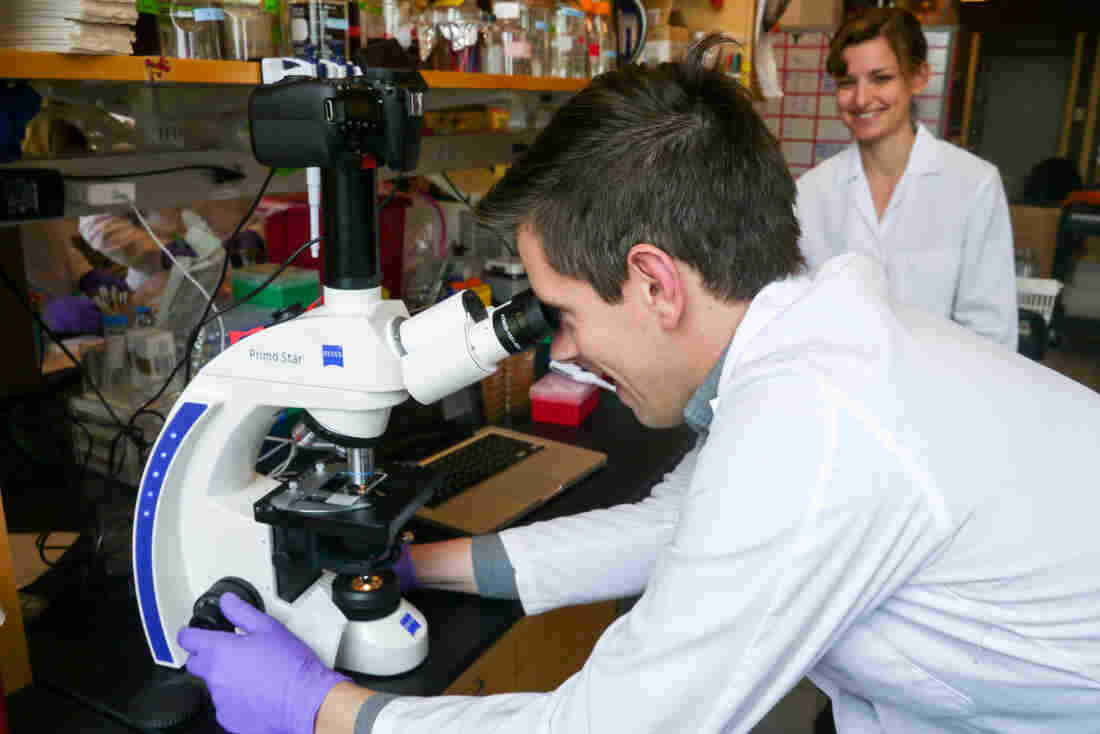 Microbiologist Benjamin Wolfe looks at a sample of sourdough starter under the microscope. It's one of many samples submitted by home bakers from around the country and abroad as part of the Sourdough Project, a citizen-science effort to study sourdough microbiomes. Marcus Woo hide caption 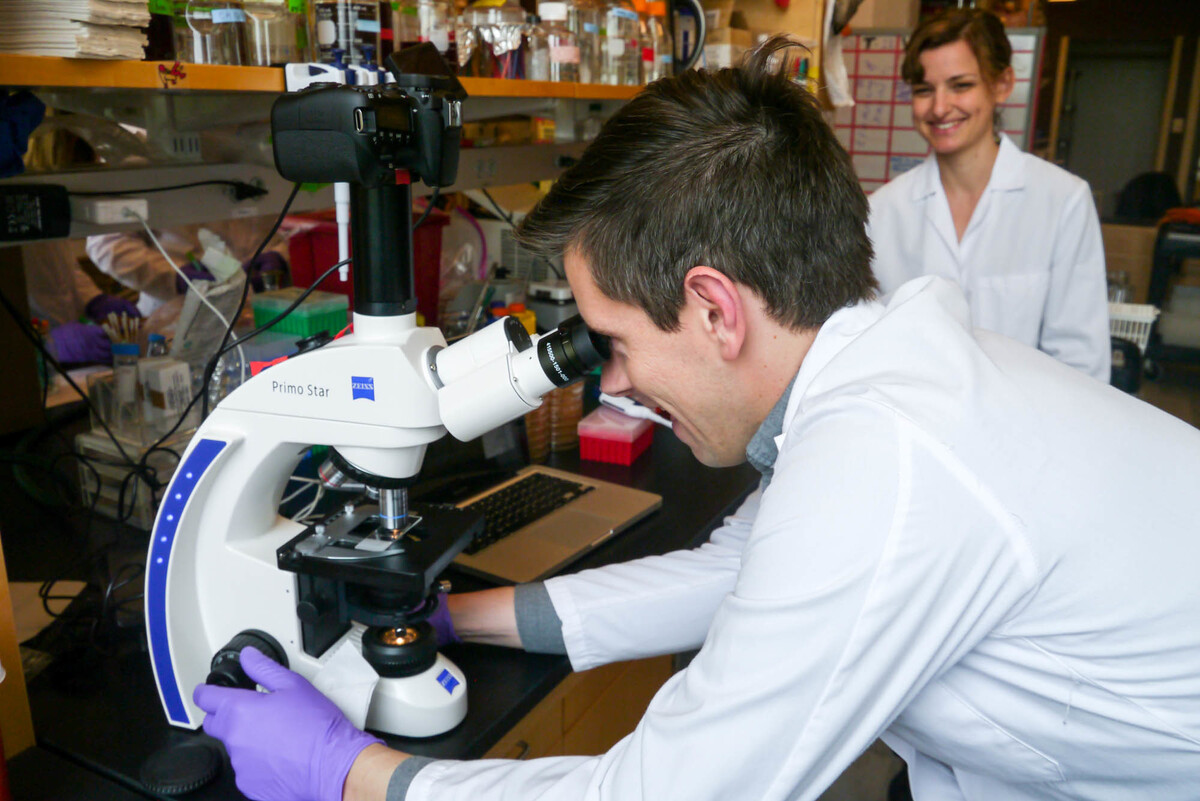 Microbiologist Benjamin Wolfe looks at a sample of sourdough starter under the microscope. It's one of many samples submitted by home bakers from around the country and abroad as part of the Sourdough Project, a citizen-science effort to study sourdough microbiomes.

Benjamin Wolfe sticks his nose into a Ziploc bag and takes a whiff. "Ooh! That's actually kind of nice," he says. Inside the bag is a pungent, beige goop. It's a sourdough starter — a slurry of water, flour, yeasts and bacteria — from which loaves of delicious bread are born. And it's those microbes that have the attention of Wolfe, a microbiologist at Tufts University.

As the microbes munch on the sugars in the flour, they produce carbon dioxide, ethanol, acids and a smorgasbord of other compounds that give sourdough its bouquet of flavors and aromas.

It's got "a little bit of buttery and barnyard," he says. He hands me the bag to sniff, and surprisingly, it does smell like butter. But barnyard? "It's like fermented hay and manure," he explains. "But in a good way."

This starter, which came in the mail from New York, and other samples sent by home bakers will be used to better understand how the mix of microbes in a starter imbues it with its unique flavor and character. The submissions are part of the sourdough project, a citizen-science initiative led by biologist Rob Dunn at North Carolina State University. Wolfe is a collaborator.

The project is trying to answer many questions: How does a starter's microbial ecosystem vary with different flours? How does a new starter compare with one that's 200 years old, filled with tradition and lore? Do they change with geography, as some claim? And, of course, how can you bake a more delicious loaf?

Not long after the researchers asked for volunteers last fall, I sealed my own starter in Ziploc bags and mailed it to Wolfe's lab. About 1,000 others responded to the initial call, and 571 of them submitted samples — mostly from the U.S. and Europe, but also a few from Australia, New Zealand and even one from Thailand.

"In terms of getting a great depth of sampling across a huge geographic area, this is impressive," Wolfe says. "We've never done anything like this for any fermented food before."

The researchers are just starting to analyze the samples, but Wolfe hypothesizes that microbial variations will be determined more by whatever microbes are already in the flour than by geography. And a rough, preliminary analysis of a few samples seems to support that. Comparing East and West Coast starters hasn't revealed any obvious differences so far. Another test shows that the microbes in different starters bought from King Arthur, a flour company, appear to be similar to one another.

For Wolfe, food is an avenue for his larger goal of trying to better understand microbial ecosystems, or microbiomes, which are found everywhere, from your gut to the oceans. In recent years, scientists have learned that microbiomes have an outsize influence on nearly every aspect of the world, including health, agriculture and the environment. Imbalances in our gut microbiomes, for example, have been linked to a laundry list of health issues, including obesity, colon cancer and autism. Last year, then-President Barack Obama launched the National Microbiome Initiative, a half-billion-dollar plan to study the microbiome.

Unlike most microbiomes, which contain up to thousands of species, fermented foods like sourdough, sauerkraut and kimchi have only a few to a couple of dozen species, making them easier to study. At the same time, they share commonalities with more complex microbiomes. For example, the microbiome on cheese rinds is similar to that on your skin.

Fermented foods, then, are like the lab mice of microbiomes, Wolfe says. "Just like how people can take a mouse and learn human biology, we're taking fermented foods and trying to learn about microbiomes." He wants to understand what environmental factors and biochemical processes determine which organisms can thrive in different microbiomes. The ultimate goal is to pinpoint the intricate molecular machinery that dictates how microbes interact and change over time under different circumstances.

And this kind of change can happen fast — within a few weeks, as Wolfe has discovered with his experiments on cheese. For example, a mold found on Camembert cheese called Penicillium (related to other molds that produce the antibiotic penicillin) grows blue-green and fuzzy in more austere, wild environments. "It looks like the thing that might rot your bread or fruit at home," Wolfe says. It produces pigments and toxins that help fight off other microbes -- a reaction to stressful environments. 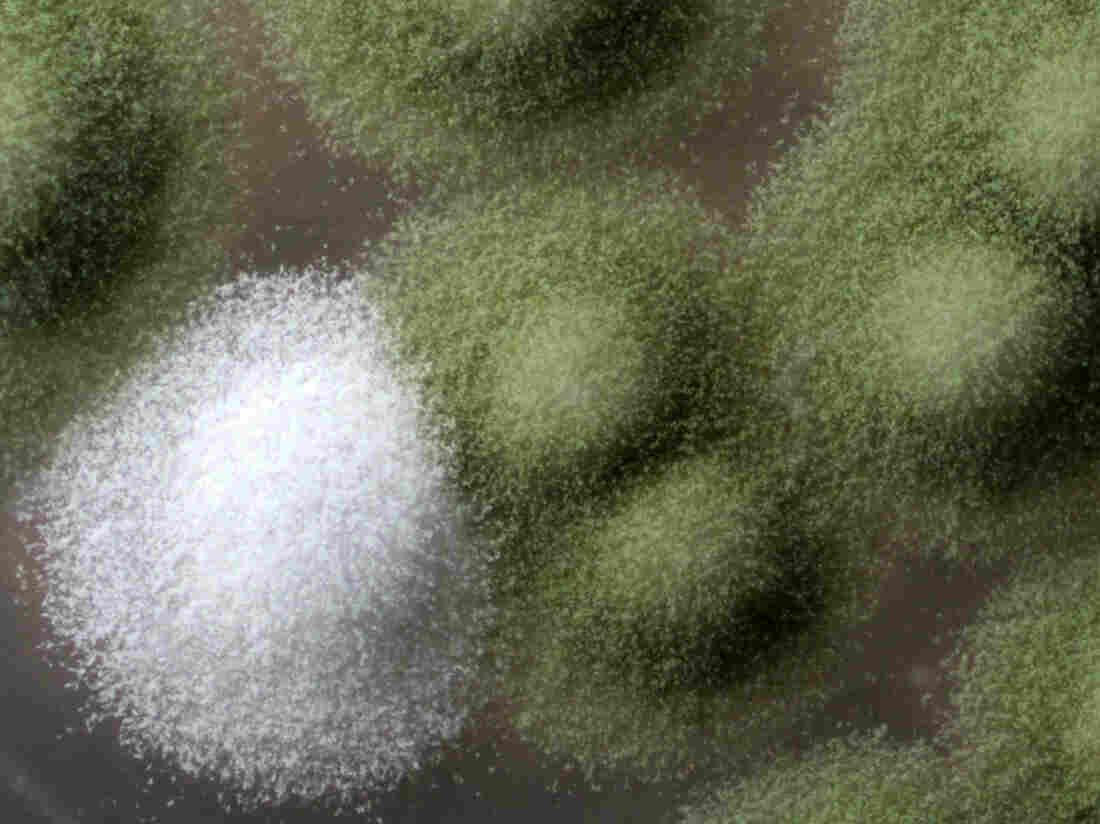 An image of Penicillium colonies. The white colony is a mutant similar to the mold found in Camembert cheese. The green ones are the wild form. Courtesy of Benjamin Wolfe hide caption 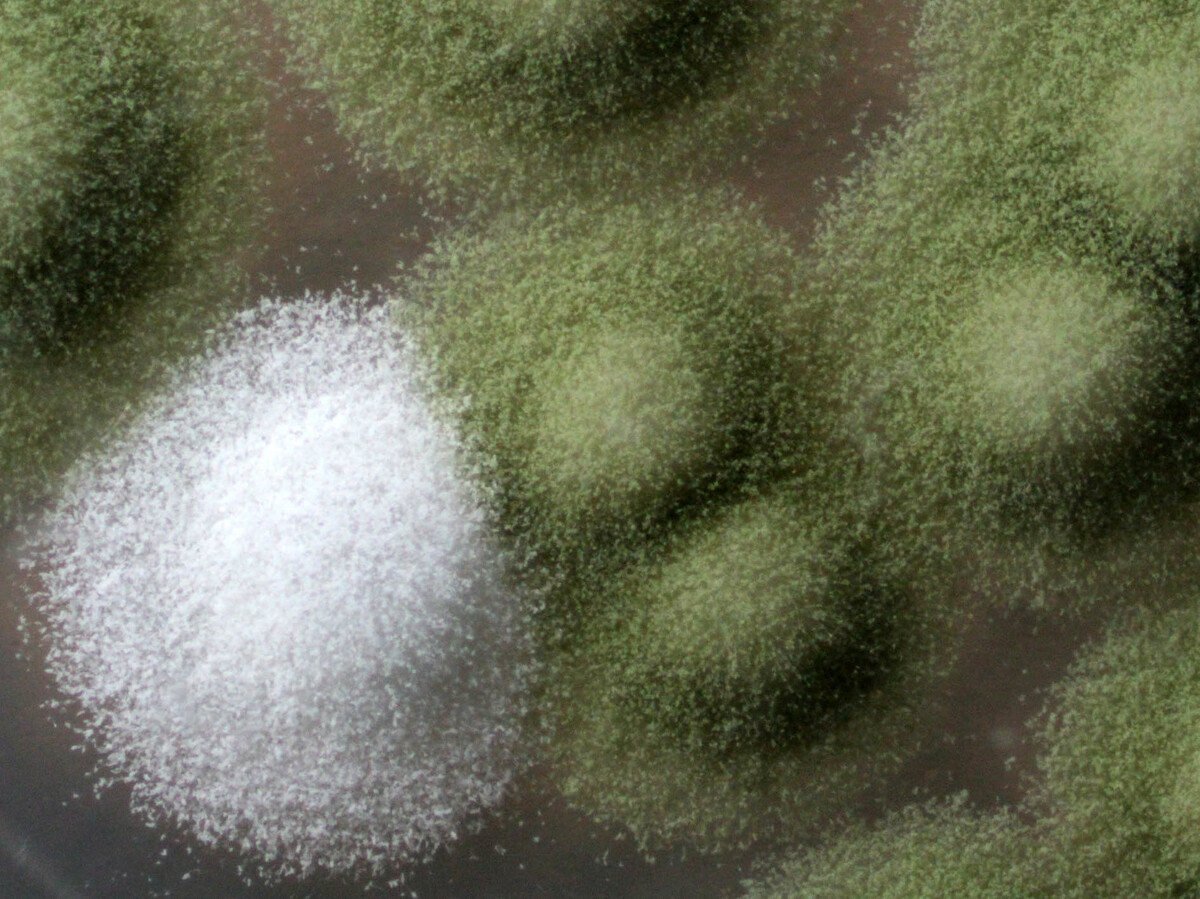 An image of Penicillium colonies. The white colony is a mutant similar to the mold found in Camembert cheese. The green ones are the wild form.

But in the comfy confined environment of a cheese cave, for example, the microbe no longer needs those harsh survival tactics. It stops making toxins, loses pigment and takes on the familiar white of Camembert. "We can see microbes completely transforming their physiology in the cheese-making environment, which is really cool," he says.

These changes aren't necessarily new species but are akin to wine-grape varieties or dog breeds. They're variations that give rise to the range of textures, aromas and flavors of cheese. Wolfe has been working with Jasper Hill Farm, a cheese-maker in Vermont, helping it to analyze its cheese microbes and better control flavors.

Wolfe and his colleagues are also studying salami, fermented cabbages like sauerkraut and kimchi, and fermented teas known as kombucha. Sourdough is just the latest to join the lab.

Back in the lab, Elizabeth Landis, a graduate student, is processing the new starter sample. After sterilizing a corner of the Ziploc bag with ethanol, she snips it with a scissors and squeezes some of the starter into small vials for freezing.

The frozen samples will be sent to Dunn's lab to have their DNA sequenced to identify every single species in the starter. But to learn how microbes interact and evolve, Wolfe and Landis need their microbes alive.

So they freeze another sample with glycerol, which keeps the microbes viable. They will isolate individual microbial species, letting them grow on petri dishes under different conditions, like varying amounts of food and nutrients. Then, they can observe how the microbes react to and change in different environments.

Wolfe and Landis look at another sourdough starter under a microscope — the sample I had sent in a few months ago. I was curious: Was an imbalanced microbiome the reason my bread didn't rise the way I wanted it to?

"You've got some good stuff!" Wolfe says. Right away, he spots a few globules and a bunch of smaller, pill-shape critters: yeasts and bacteria, respectively. The proper ratio of yeast cells to bacterial cells, he tells me, is about 1 to 100. "It's a typical sourdough," he says.

So it wasn't my starter that was at fault, after all. It was me.

These samples will now go to Dunn's lab, which is trying to take a DNA snapshot and capture the most detailed census ever of a sourdough microbiome. The researchers plan to begin sequencing the first batch of starters in a few months. The hope is that identifying individual microbes in the starters will help answer the hows and whys behind the spectrum of aromas and flavors in sourdough. What they learn may even help bakers create new kinds of even more delicious bread.

We may never look at sourdough the same way again. "We have these things right on our dinner plates," Wolfe says. "Yet there are all these mysteries of the microbiome that's right there that we haven't figured out."

Marcus Woo is a freelance science journalist based in the San Francisco Bay Area who has written for Wired, BBC Earth and Future, Smithsonian, New Scientist, Slate and Discover, among others.