Accessibility links
It Is A Truth Universally Acknowledged That Jane Austen Pairs Well With Tea : The Salt Pinkies up, Janeites! We mark the bicentennial of Austen's death with a look at her relationship with a beloved cuppa. 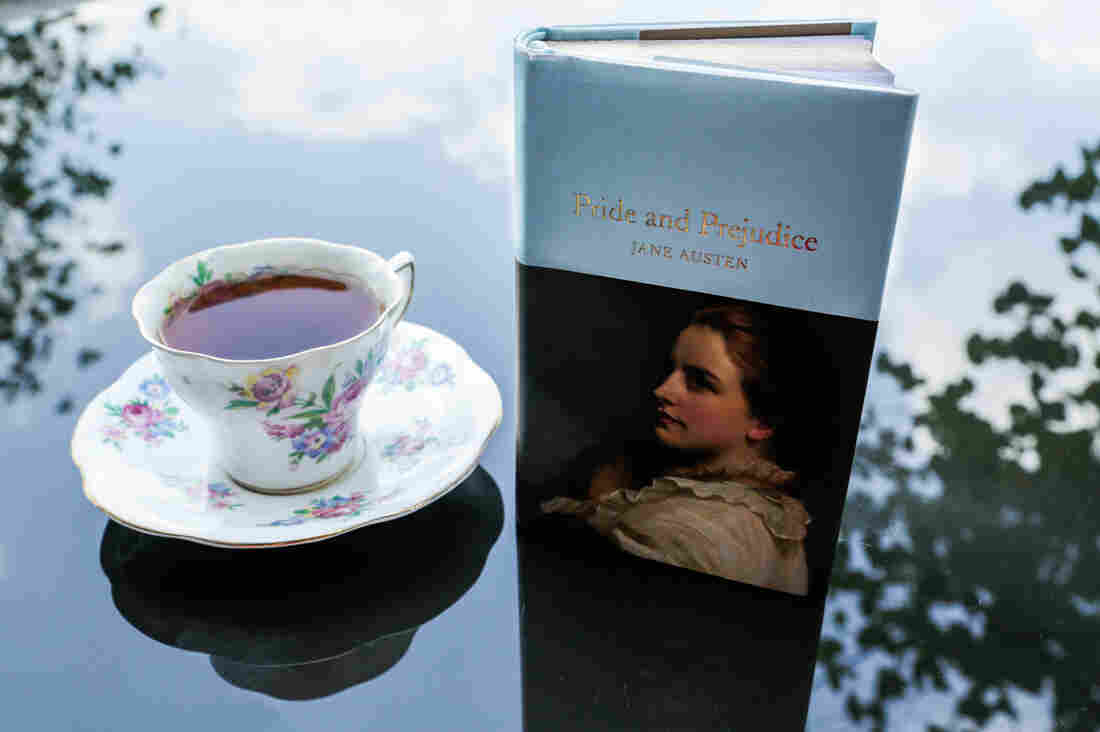 Pinkies up, Janeites! We mark the bicentennial of Austen's death with a look at her relationship with a beloved cuppa. Shelby Knowles/NPR hide caption 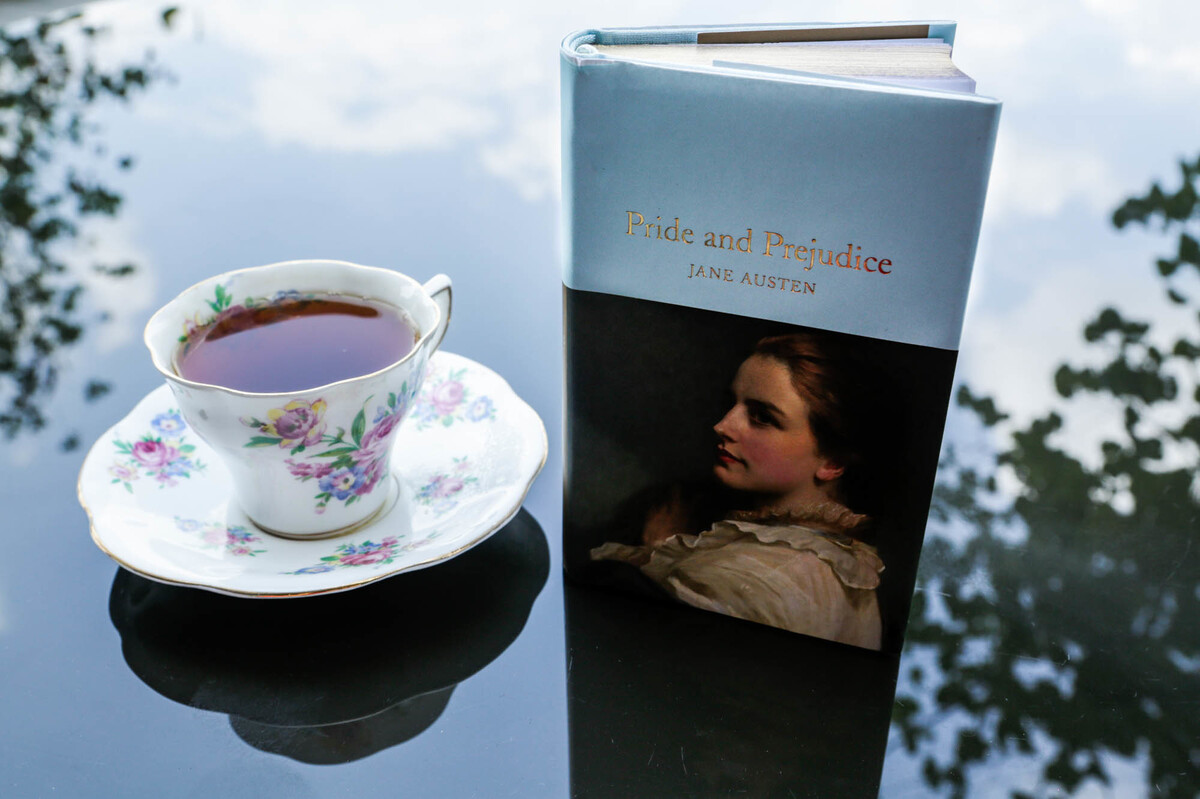 Pinkies up, Janeites! We mark the bicentennial of Austen's death with a look at her relationship with a beloved cuppa.

In an essay on Jane Austen, Virginia Woolf observed, "Of all great writers she is the most difficult to catch in the act of greatness."

To that double-edged and astute assessment, one can add, she is also the most difficult to catch in the act of tea-time.

This observation might seem irksomely contrarian to the legions of Janeites in hats and bonnets gathered around tea and scones to pay fealty to the novelist on the bicentenary of her death, which falls today.

'Jane Austen and tea' is after all, a comely capitalist hustle that has spawned a cottage industry of crockery, tea towels, tea bags, tea rooms and boutique brews named Dashing Willoughby, Marianne's Wild Abandon and, in a nice comic touch, Compassion For Mrs. Bennet's Nerves. Austen would have been especially amused by the latter – her mother, a vigorous hypochondriac who lived to the ripe age of 88 and who almost certainly inspired the high-strung Mrs. Bennet in Pride and Prejudice, was constantly sipping on dandelion tea to soothe her mysterious "bilious complaint."

But to turn to Austen's novels to savor her much-paraded relationship with tea is to set oneself up for disappointment. Tea is mentioned frequently but never fully. The sampling of lines below, variations of which occur throughout her six novels, illustrates the brisk indifference with which Austen treats tea.

"The tea things were brought in" (Sense and Sensibility)

"When the tea-things were removed, and the card-tables placed" (Pride and Prejudice)

"Dinner was soon followed by tea and coffee" (Mansfield Park)

"Mr. Woodhouse was soon ready for his tea; and when he had drank his tea he was quite ready to go home" (Emma)

"tea was over, and the instrument in preparation" (Emma)

"Mr. Tilney drank tea with us, and I always thought him a great addition" (Northanger Abbey)

Characters are always on their way to tea or from it and the tea things are either being brought in or cleared away. Tea serves as no more than a conjunction to join the two more significant parts of the evening: the dinner that precedes it and the recreation that follows it, involving a musical performance or card games like whist or quadrille. But of the ceremony of tea-drinking itself, there is precious little. There is no description of the kinds of tea being imbibed – whether oolong, hyson, congou, bohea or gunpowder; nothing on the elaborate equipage – the tea caddies, silver urns, flowered china, silver teaspoons, tea tables; and no acidic observations on the affectations and gossip associated with tea drinking.

Austen's scant teaspoon of detail is surprising — and infuriating — because she did, in fact, love tea — as is amply evident from her correspondence.

"Let me know when you begin the new Tea & the new white wine," she wrote in a letter from London to her elder sister Cassandra at their Chawton cottage in Hampshire. "My present Elegancies have not yet made me indifferent to such Matters. I am still a Cat if I see a Mouse."

"Proof enough," writes Kim Wilson in her 2011 book Tea with Jane Austen, "Jane was an avid tea lover, ready to pounce on a really good cup of tea."

Wilson's slim book, which thoroughly mines Austen's letters, is excellent on the role of tea in the writer's personal life. She likely took no milk in her tea – a preference Wilson smartly surmises from a letter in which the novelist compliments an acquaintance on the pleasing trait of taking "no cream in her Tea."

In the Austen household, the tea, an expensive imported commodity, was kept under lock and key to prevent pilfering by servants. Austen kept the key and made the morning tea and breakfast (toast, muffins or rolls with butter, homemade raspberry jam and honey from Cassandra's beehives). In rich homes, the tea-making was often entrusted to the poor relative – like Fanny Price in Mansfield Park – rather than the maid. Austen was also in charge of buying the family tea, which she did directly from Twinings, the reputed tea-merchants at the Strand in London, a wise move at a time when tea was adulterated with everything from arsenic to sheep's dung.

But Wilson runs out of material when it comes to Austen's novels, though she valiantly squeezes every drop of significance from the weak brew on offer. "At the center of almost every social situation in her novels one finds – tea," she writes. "In Emma, does Miss Bates drink coffee? Of course not: "Not coffee, I thank you, for me – never take coffee. – A little tea if you please." In Sense and Sensibility, what is everyone drinking when Elinor notices Edward's mysterious ring set with a lock of hair? Tea, of course. And in Pride and Prejudice, what is one of the supreme honors Mr. Collins can envision Lady Catherine bestowing on Elizabeth Bennet and her friends? Why, drinking tea with her, naturally?"

This is certainly true, but again, the opportunity to lampoon tea-time manners is blithely passed over. One feels a keen sense of loss at being deprived of Austen's sly commentary of Mr. Collins fawning over her ladyship's Sèvres and lapsang souchong.

Instead, what we do get from Austen's novels is the role of this extremely popular national beverage in upper class Regency society. Tea was served after dinner, which took place in the early evening at about four or five o'clock — though in fashionable homes it was served later. The afternoon ceremony that we know today as tea-time was a Victorian invention.

In Austen's day, tea was also served as a refreshment at stylish balls, with women hoping that a gentleman would offer to escort them to the tea-room in the way that a man today would offer to fetch a woman a drink from a crowded bar. At a grand ball in Bath, Catherine Moreland of Northanger Abbey, and her friend Mrs. Allen, feel awkward and out of place until "they received an offer of tea from one of their neighbors; it was thankfully accepted, and this introduced a light conversation with the gentleman who offered it..."

Tea historian Bruce Richardson, in a talk titled Jane Austen's Tea Things, notes that Austen was born on December 16, 1775, the second anniversary of the Boston Tea Party. He doesn't elaborate on the symbolism of this coincidence — because there isn't any. Austen kept politics and flag-waving out of her novels. But at one point, a flash of economic patriotism manifests itself, and it is triggered by tea things. It occurs when Catherine Moreland compliments her future father-in-law General Tilney on the "elegance of the breakfast set" at Northanger Abbey. The general, writes Austen:

"was enchanted by her approbation of his taste, confessed it to be neat and simple, thought it right to encourage the manufacture of his country; and for his part, to his uncritical palate, the tea was as well flavoured from the clay of Staffordshire, as from that of Dresden or Sèvres."

Though Austen doesn't mention the make of the breakfast set, she was almost certainly referring to Wedgwood. The Wedgwood factory was set up in Staffordshire in 1759 by England's most famous potter, Josiah Wedgwood. It produced excellent china, but the snobs still exalted imported Sèvres and Dresden over the local rival. The Austens were loyal Wedgwood patrons, and Jane wrote happily to Cassandra about "the pleasure of receiving, unpacking & approving our Wedgwood ware." She no doubt shared the general's nationalistic pride in its English origins, and like him, relished sipping her tea from Staffordshire clay.

Austen lived at a time when tea, which had become popular in England in the late 1600s, was drunk by everyone, from the elite to the working classes, and from young children to the old invalid Mrs. Bates, who is "almost past every thing but tea and quadrille." One can only hope that it brought some ease and cheer to Austen's grim last weeks, when she was almost past everything herself.

Despite being stricken with fever and severe pains in her back and face, Austen continued to write in her cool, ironic style, refusing to surrender to despair or self-pity. Days before she died at the premature age of 41, she dictated 24 lines of comic verse from her sickbed. In her last letter, written from the sofa to which she had been confined, she joked about being "promoted to a wheel-chair if the weather serves."

That never happened. But to the last, her prose remained as bracingly astringent as a cup of tea unsoftened by drivelings of cream.