Accessibility links
The YouTube Star Who's Teaching Kids How To Bake : The Salt Celebrity chef Rosanna Pansino hosts the YouTube show Nerdy Nummies and has more than 8 million subscribers. Among her fans are thousands of children who want to learn how to bake. 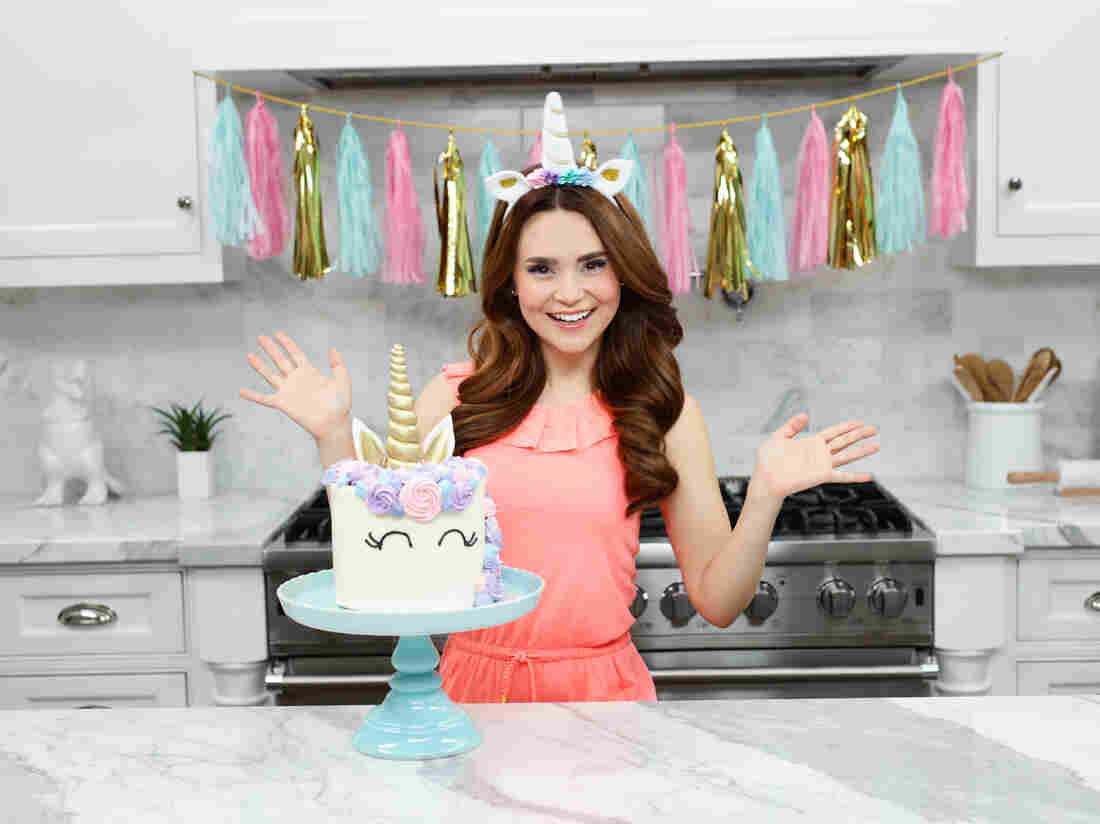 Rosanna Pansino is a YouTube star and a celebrity chef. Her YouTube cooking show Nerdy Nummies has millions of subscribers, many of whom are children interested in baking. Courtesy of Rosanna Pansino hide caption 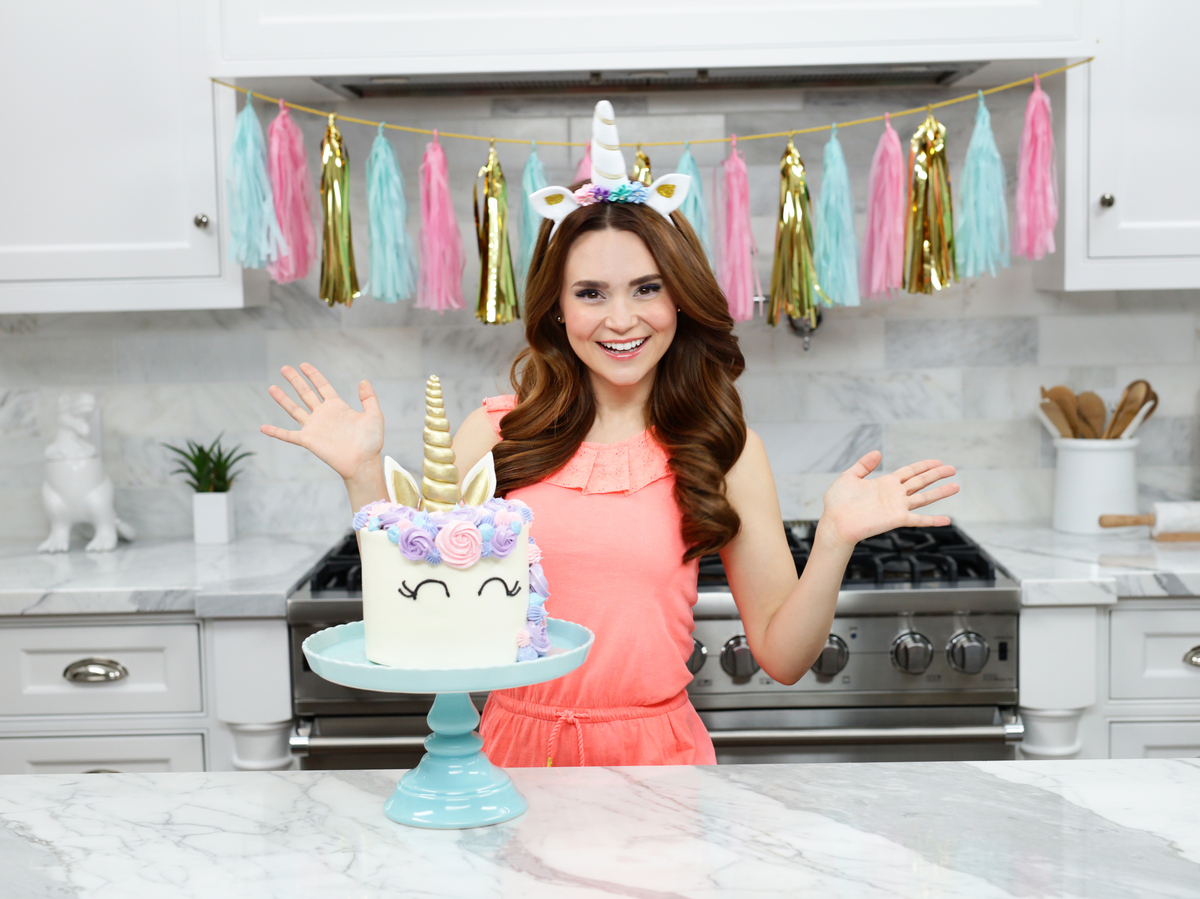 Rosanna Pansino is a YouTube star and a celebrity chef. Her YouTube cooking show Nerdy Nummies has millions of subscribers, many of whom are children interested in baking.

Now, Pansino is a celebrity chef and one of the highest-paid people on YouTube, with an annual income of around $6 million, according to Forbes magazine. Her YouTube channel boasts 8.5 million subscribers and 2 billion views. And among her fans are thousands of kids eager to learn how to bake.

Since 2011, Pansino, 32, has morphed from a sweetly scruffy, pigtailed look to something resembling a carefully coiffed Food Network star. I ask her what else has changed.

"They've become actual recipes," she says, dryly. Then she bursts into laughter.

Pansino has always been about the fun of decorating, the do-it-yourself ethos that's always driven maker videos on YouTube. Now she has a team of 10 employees helping her dream up real recipes for frozen princess cakes, rainbow cakes, unicorn cakes and even unicorn rainbow poop cookies.

"My favorite episode is where she made a unicorn cake," says Sofia Roberts, 12, of Pasadena, Calif. Her best friend, Sofia Mathews, also 12, chimed in. "That one's cool."

The Sofias epitomize a certain kind of contemporary underage baker who loves Nerdy Nummies, Masterchef Junior and Tasty on BuzzFeed. They had just finished making four kinds of French macarons.

Back when I was 12, in the 1980s, just making chocolate chip cookies counted as a major culinary win. But these days, a foodie grandparent and grandchild might go to the craft store and pick up fondant for an afternoon of baking and decorating, inspired by Pansino and other YouTube channels such as The Scran Line or the extreme and engrossing How to Cake It. (Watch the turkey episode.)

It's impossible to know the exact ages of people watching these channels. YouTube says it does not track viewers under age 13. In fact, a company spokeswoman told me YouTube does not even see itself as serving kids.

That comes as news to Sofia Mathews. She says YouTube's do-it-yourself videos are perfect for kids figuring out how to make stuff. "You can tell if you're doing it right because a person is actually doing it," she says.

And that's especially helpful for visual learners — including Nerdy Nummies host Pansino. "I have a learning disability," she says. She says she is dyslexic. "And the best way that I learned was through visual content and clear communications that are very clear and direct."

American chef Julia Child (1912 - 2004) standing with a cut of meat in her kitchen. Pansino says watching Child on television taught her to be fearless and not worry about making mistakes. Bachrach/Getty Images hide caption

American chef Julia Child (1912 - 2004) standing with a cut of meat in her kitchen. Pansino says watching Child on television taught her to be fearless and not worry about making mistakes.

In fact, that's what this digital cooking star learned from her analog ancestor, a public television star who used to trill a famous sign off: "Bon Appetit!" "The only person I watched was Julia Child," Pansino says, almost dreamily. "She's fun. And she's fearless. She's not afraid to make mistakes. And if you watch her videos cooking in the kitchen, she makes mistakes all the time."

(Side note: While Child did once spill potato pancakes all over her stove top, she never dropped a turkey on the floor and then stuck it in the oven, as has often been claimed.)

"Who cares?" says Pansino. "Try it out. Try everything."

What a great lesson, for kids both in and out of the kitchen. That said, the mother of one of my acquaintances wryly joked that she wished online cooking videos paid just a little more attention to cleanup.