Accessibility links
What's It Really Like To Work In A Prison Goat Milk Farm? We Asked Inmates : The Salt Whole Foods has been forced to stop selling goat cheese made from milk that came from a prison farm, where inmates work for less than a dollar an hour. Yet the inmates themselves aren't complaining. 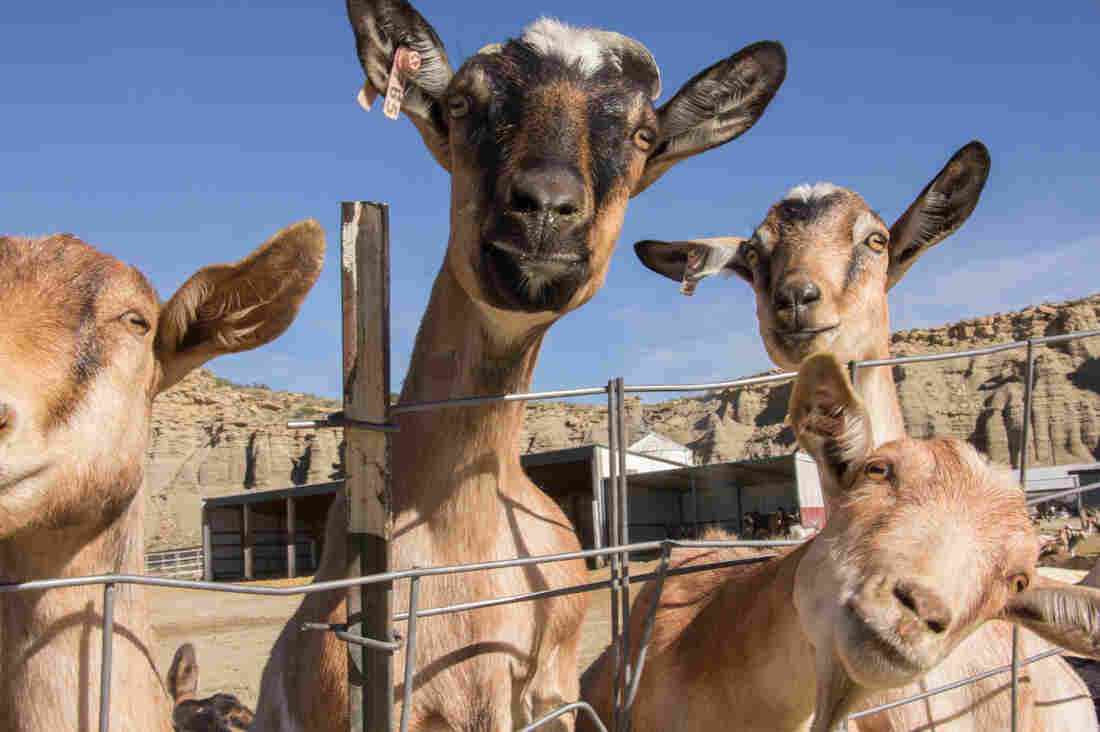 "The goats are kind of cool," says former inmate Chad Redding. "The females are like dogs — they just want your attention." Dan Charles/NPR hide caption 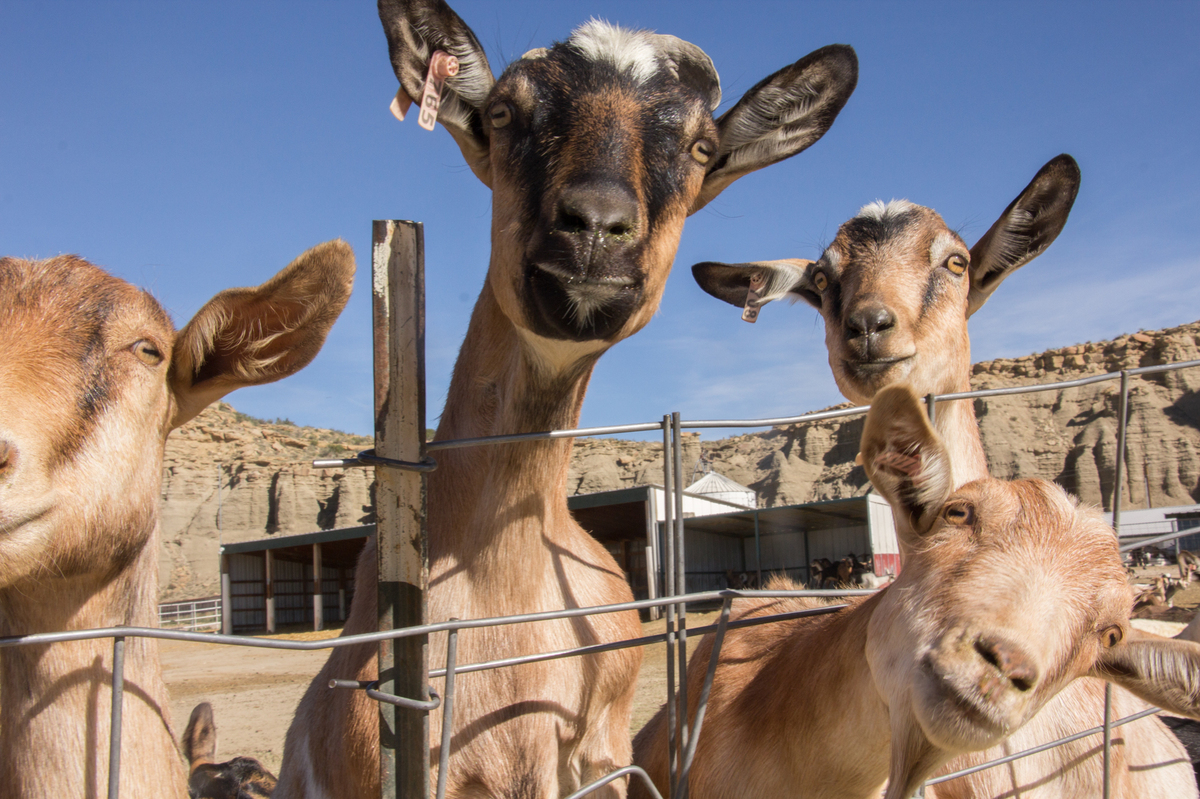 "The goats are kind of cool," says former inmate Chad Redding. "The females are like dogs — they just want your attention."

Jim Schott had one goal when he abandoned academic life to start the company called Haystack Mountain: He wanted to make some of the finest goat cheese in the country. With cheese in hand, he visited supermarkets, trying to persuade them to sell his product. Some didn't take him seriously. But Whole Foods did.

Jim Schott had a great story to tell. He'd walked away from a university job, mid-career, to raise goats on five acres of land.

"I didn't want a compartmentalized life," he says. "I wanted a life where the work that I did, the people I saw, the family I had, that it was all of one piece, and that it was connected to the earth, and to ...." He pauses. "To real things."

Whole Foods loved his cheese. His company grew. It also changed. Ten years ago, Haystack Mountain started buying milk from a farm in a prison. Schott doesn't recall telling Whole Foods or his other customers about that change in the Haystack Mountain story. In any case, Schott felt that it was a good thing — "a model of good prison management."

Some of the cheeses that Haystack Mountain makes at its facilities in Longmont, Colo. Dan Charles/NPR hide caption

Then, in 2015, a prison reform activist named Michael Allen sent a letter to John Mackey, the CEO of Whole Foods. Allen demanded that Whole Foods stop selling Haystack Mountain's cheese because it was made, in part, using the labor of prisoners earning pennies per hour.

The way Allen sees it, Haystack was "taking advantage of helpless, powerless individuals. They're fair game for corporations to make money off of. And I just told [Mackey] that we wanted him to get out of that business."

Many things besides cheese are made in prisons. Across the country, tens of thousands of inmates work for businesses that have set up operations inside prison walls. They make flags and furniture. Most of the time, they attract little attention.

People may feel differently about something they eat, though, especially a boutique food like goat cheese. To Allen's amazement and delight, Whole Food caved to his demands.

In a statement, the company said that some of its customers weren't comfortable with products made by prisoners, so it would no longer sell them.

The inmates are still milking those goats, though. I was curious about this farm, and set up a visit.

The goat dairy sits inside a vast complex of incarceration, with several different prisons, near Cañon City, Colo. But the farm itself is a five-minute drive from the buildings where inmates live. In fact, when you're there, you can almost forget you're in a prison. The goats, in their pens, look out over irrigated corn fields, the Arkansas River in the distance, and barren hillsides on the other side. To be perfectly honest, it's beautiful. 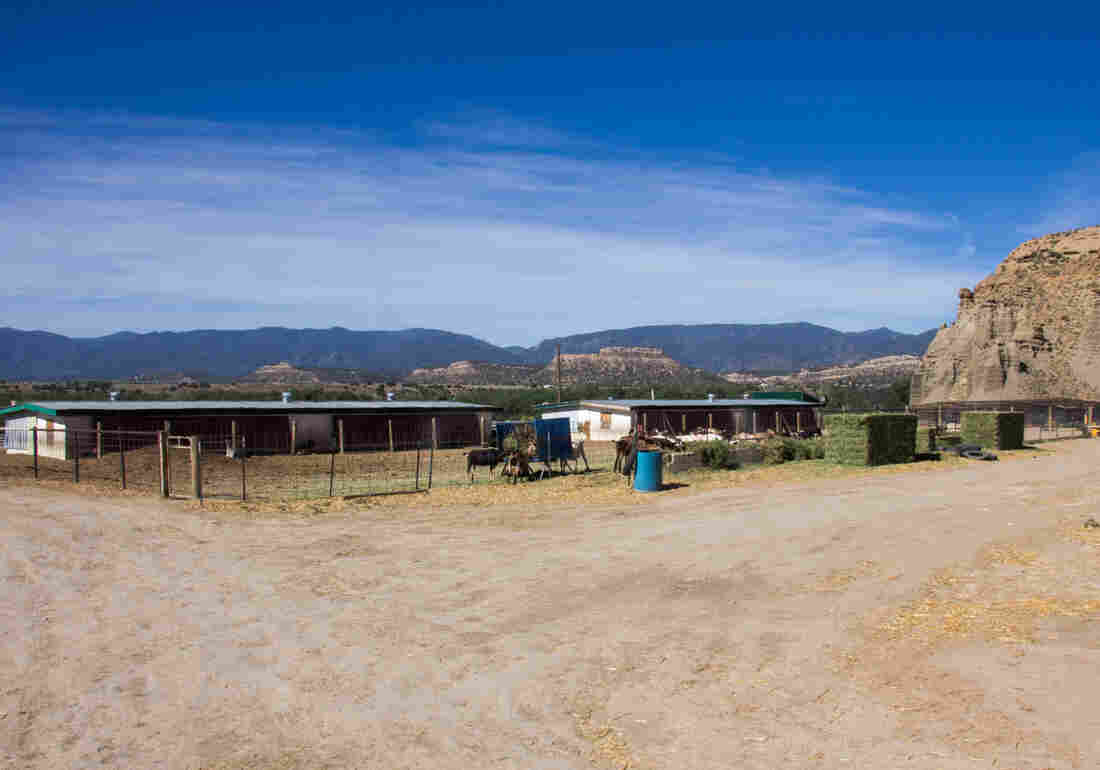 The goat dairy at Skyline Correctional Center is set on a hill overlooking the Arkansas River. Dan Charles/NPR hide caption

Joey Grisenti runs this farm. He works for Colorado Correctional Industries — a state agency that operates businesses inside Colorado's prisons. Those businesses are supposed to make money to help fund the prison system and also provide work opportunities for prisoners.

Most of the inmates here are near the end of their sentences. They're in a minimum-security facility called Skyline Correctional Center. But it's still a prison.

Workers on this farm get strip-searched. If they're caught with drugs or tobacco, or get in fights, they could lose this job and be sent to a higher-security facility with a lot less freedom.

And then there's the pay. It varies, depending on the job, but most inmates on the farm earn a few dollars a day. That's better than most prison jobs, which typically pay less than a dollar a day, but still, it's cut-rate labor.

And that's a big reason why the farm is here.

In the years after Haystack Mountain started making cheese, one of the company's biggest problems was finding a reliable source of goat milk. Jim Schott's small farm couldn't produce enough on its own, and every outside supplier eventually went out of business.

In 2007, the company reached a crisis. Another supplier had decided to shut down his goat dairy, and Haystack had no other options. "A couple of weeks, and we weren't going to be able to supply our customers with cheese," says Chuck Hellmer, who by that time had replaced Schott as Haystack's CEO.

At the moment, Hellmer got a call from one of the top managers at Colorado Correctional Industries. He'd heard about Haystack's problem, and proposed a solution. CCI was ready to set up a goat dairy inside the Cañon City prison.

"Nobody wants to have a big goat dairy, so we did it," Joey Grisenti says. This farm, with its guaranteed supply of low-cost workers, can survive when other farms cannot. "A lot of people just can't afford to have the manpower that we have here," he says.

Of course, that cheap manpower is exactly what made the shoppers at Whole Foods uncomfortable. 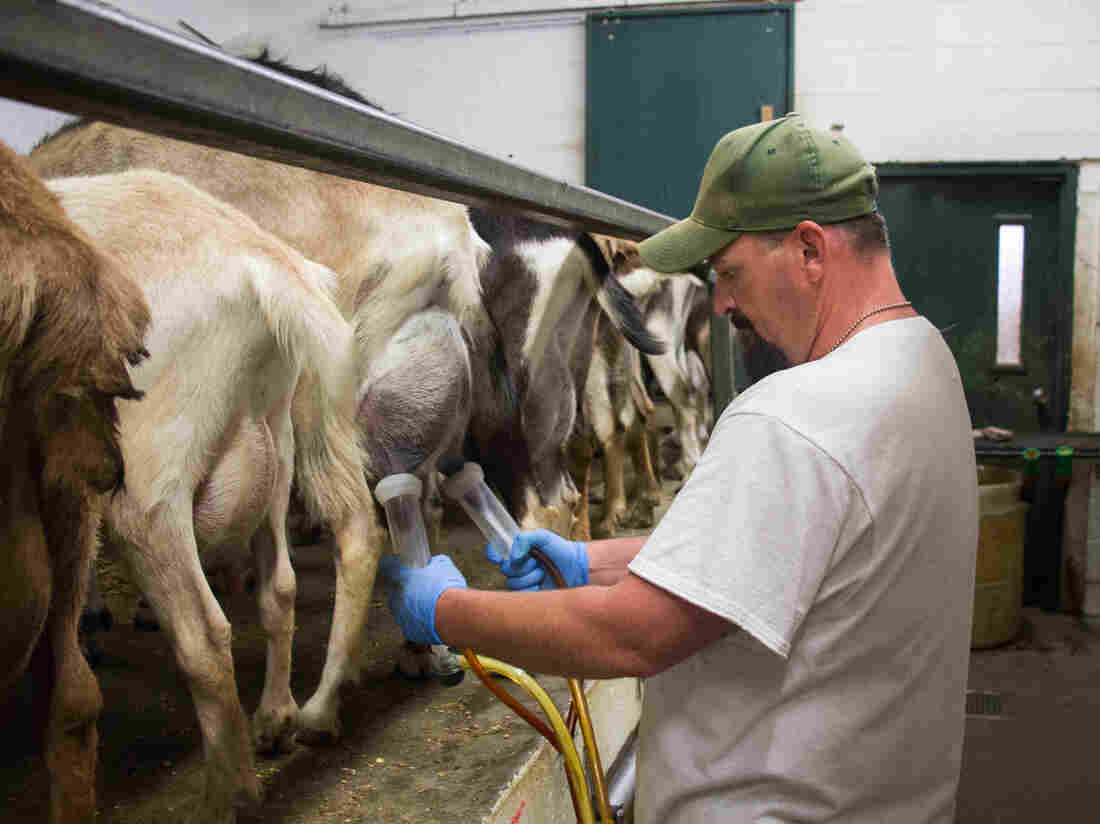 Jeremiah Pate has been in prison for the past eight years. He's hoping to get out on parole this year. Dan Charles/NPR hide caption 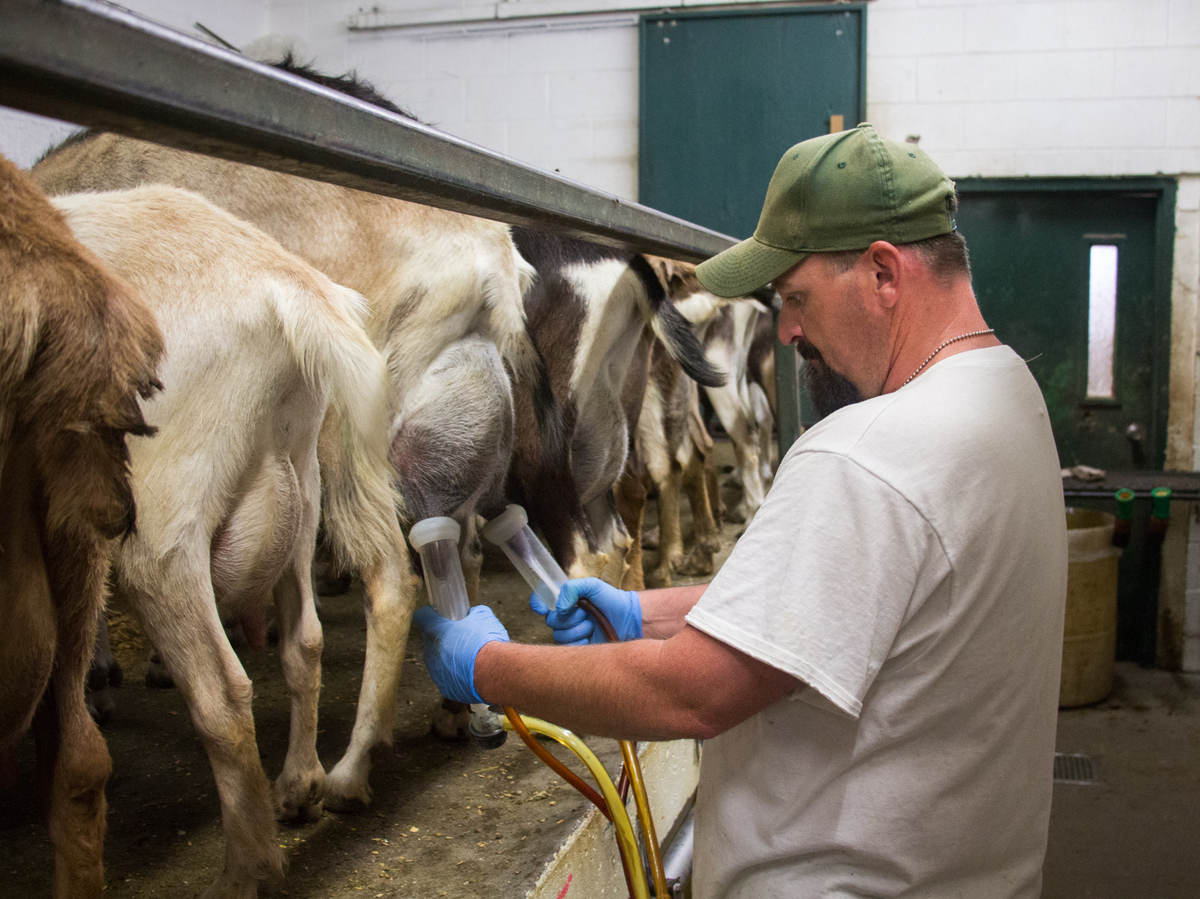 Jeremiah Pate has been in prison for the past eight years. He's hoping to get out on parole this year.

But what do the workers themselves think?

I find Jeremiah Pate in the milking barn, attaching milking machines to the goats' udders.

"It's a great thing," Pate tells me. "It beats the alternative. Rather than sitting in your tiny little cell, you get to come out here."

Every man I meet echoes that thought. They aren't thinking about what was fair on the outside. They were just thinking about their options in prison, and in that perspective, the farm looked pretty good.

Several of them told me that it's nice just being around the animals. Jason Rowell, who is most of the way through a 24-year sentence, says the goats can sense when you're feeling down. "Like the other day I hit my head in pen 16, and I had a goat come over, and she stuck her head underneath my chin and picked my head up. She was like, 'Are you all right?'" he says.

I wasn't sure if I was getting the whole story from these inmates. In their position, criticism of the prison would do them no good.

So I tracked down two men on the outside who'd previously been in this prison, and worked on this farm. And they told me pretty much the same thing.

"I think it's a good thing, all in all," says Duwane Engler. Engler spent four months at Skyline, five years ago. Today, he lives in Pueblo, Colo., with his wife and two young daughters. Interestingly, they have a small herd of about a dozen goats living in the back yard. It grew out of a 4-H project, Engler explains.

"Part of the deal, when you're in prison, you have to work anyway," Engler explains. "If you're in a maximum facility, you're going to do work, you're never going to leave the facility, and you're scrubbing walls with a toothbrush, basically. These guys actually get out, they have a purpose, and they make more than 60 cents a day."

Chad Redding, who just got out of Skyline a few months ago, was slightly more cynical about the experience. "I think it's all right. I don't know if I'd protest it. It's no different than having some Chinese shoe shop make your Nikes for, like, a dollar. You're still going to buy them at Macy's. I mean, it's the same thing."

Michael Allen, the activist who got Whole Foods to stop selling Haystack Mountain's goat cheese, says he understands why prisoners like having those jobs. But he'll keep fighting against prison labor until the workers get paid better.

As for Haystack Mountain, it's still in business. In fact, it's growing, still making top-quality chevre and a variety of other cheeses by hand, just as Jim Schott dreamed he'd do almost three decades ago. And several times a week, the company sends an aging tank truck to Cañon City, three hours away, to pick up a load of goat's milk at the prison.