Accessibility links
The Un-Pretty History Of Georgia's Iconic Peach : The Salt The state isn't the biggest producer of the pink-orange fruit. So why are Georgia peaches so iconic? The answer has a lot to do with slavery — its end and a need for the South to rebrand itself. 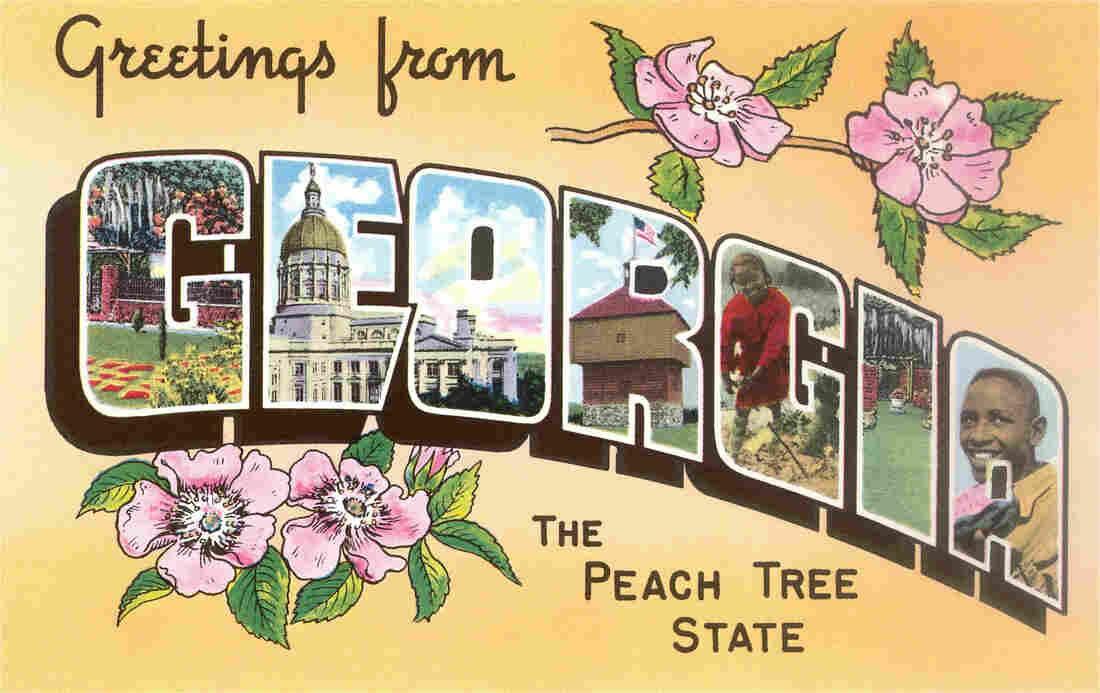 A vintage postcard from the Peach Tree State. Georgia isn't the biggest producer of the pink-orange fruit. So why are its peaches so iconic? The answer has a lot to do with slavery — its end and a need for the South to rebrand itself. Found Image Holdings Inc/Getty Images hide caption 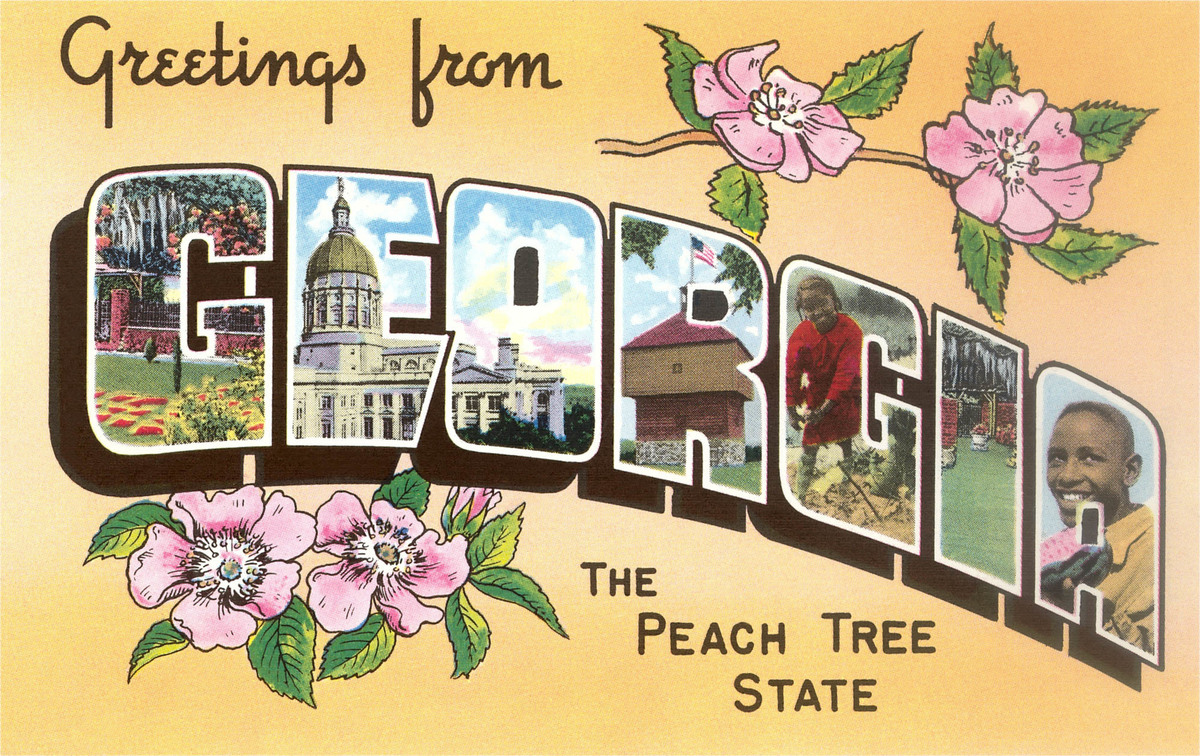 A vintage postcard from the Peach Tree State. Georgia isn't the biggest producer of the pink-orange fruit. So why are its peaches so iconic? The answer has a lot to do with slavery — its end and a need for the South to rebrand itself.

During peach season, Georgia's roads are dotted with farm stands selling fresh peaches. Year-round, tourist traps sell mugs, hats, shirts and even snow globes with peaches on them. At the beginning of the Georgia peach boom, one of Atlanta's major roads was renamed Peachtree Street. But despite its associations with perfectly pink-orange peaches, "The Peach State" of Georgia is neither the biggest peach producing state (that honor goes to California) nor are peaches its biggest crop.

So why is it that Georgia peaches are so iconic? The answer, like so much of Southern history, has a lot to do with slavery — specifically, its end and a need for the South to rebrand itself. Yet, as historian William Thomas Okie writes in his book The Georgia Peach, the fruit may be sweet but the industry in the South was formed on the same culture of white supremacy as cotton and other slave-tended crops.

Peaches, which are native to Asia, have been growing haphazardly in the United States since they were brought over by Europeans in the 17th century. But it wasn't until the latter half of the 1800s that aspiring horticulturists began to try and grow the peach as an orchard crop. In 1856, a Belgian father-and-son pair, Louis and Prosper Berckmans, purchased a plot of orchard land in Augusta, Ga., that would come to be known as Fruitland. Their intention was to demonstrate that fruit and ornamental plants could become just as important an industry in the South as cotton, which was ruining the soil with its intensive planting. 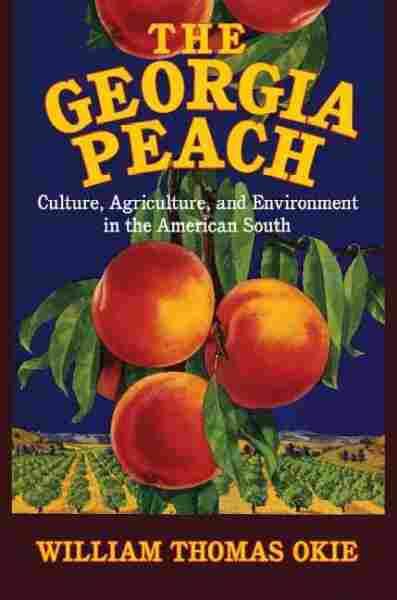 Culture, Agriculture, and Environment in the American South

Horticulture slowly became accepted as a gentleman's pursuit. But it wasn't until the end of the Civil War and the abolishment of slavery that the sudden availability of labor gave peaches the perfect opening. After the war, "fruit growing, which to the cotton planter was a secondary matter, [became] one of great solicitude to the farmer," Prosper Berckmans wrote in 1876. By the 1880s, Fruitland had grown so large and essential that it mailed 25,000 catalogs every year to horticulturists in the United States and abroad.

Freedmen now needed year-round employment, and the labor requirements of the peach season — tree trimming and harvest — fit perfectly with the time of year when cotton was slow. Though the story of the post-bellum South is often one of industrialization and urbanization, it was also a time of redefining what agriculture would mean without the enslaved labor plantation owners had relied on.

"Cotton had all these associations with poverty and slavery," says Okie, an assistant professor of history at Kennesaw State University in Georgia.

The peach had none of that baggage.

While King Cotton was still an important part of the Southern economy, town councils began sponsoring peach festivals and spreading marketing materials that sung the praises of Georgia-bred peaches like the famous Elberta Peaches.

"Tellingly," Okie writes, "the only role mentioned for Black southerners in the great Georgia Peach Carnival was as members of the opening procession's 'Watermelon Brigade' " — about 100 African-Americans who marched with the racially laden fruit balanced on their heads.

Gentleman farmers saw fruit cultivation as something particularly refined and European, and a craze for all things "oriental" gave peaches an even greater allure. This cultured crop fit in with the narrative white Southerners were eager to tell about themselves after the Civil War. "Growing peaches for market required expertise that seemed unnecessary with corn and cotton, which any dirt farmer could grow," Okie writes. To succeed, peach farmers had to be able to access horticultural literature and the latest scientific findings. Both required literacy, as well as a certain level of education that was still out of reach for many newly freed men and women. 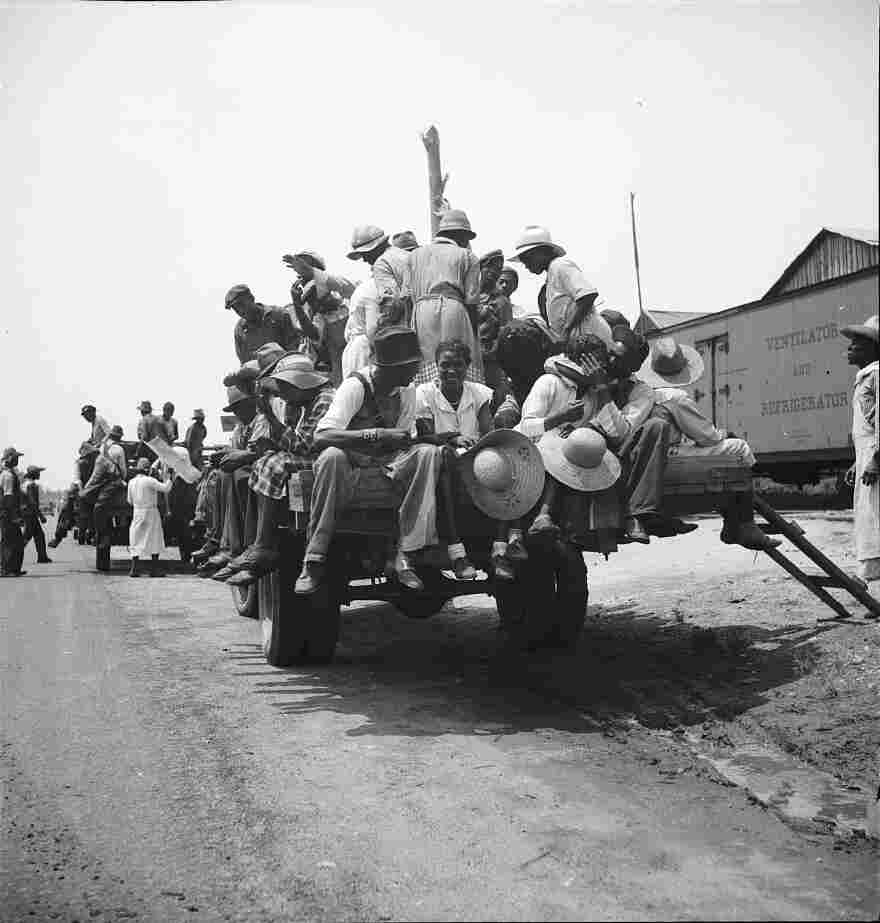 An undated photo shows peach pickers being driven to the orchards in Muscella, Ga. Black labor was essential for the success of the peach crop, even if African-Americans were rarely credited for the importance of their work. Dorothea Lange/Library of Congress hide caption 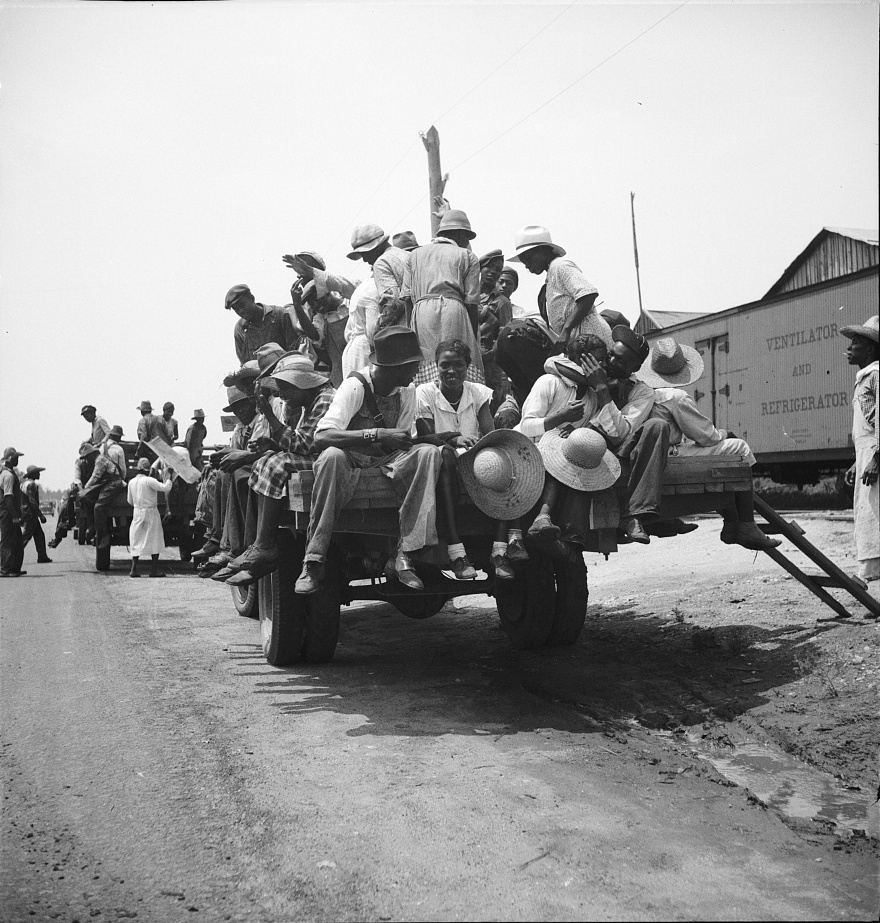 An undated photo shows peach pickers being driven to the orchards in Muscella, Ga. Black labor was essential for the success of the peach crop, even if African-Americans were rarely credited for the importance of their work.

Before peaches became an important crop, they hung low on branches throughout the South and landowners who saw them as without value were happy to give them freely to slaves. But once peaches were part of the agricultural economy, they became off limits to all but those who could afford them. By the end of the 1800s, Okie writes, a landowner who caught three black children pilfering little more than a handful of peaches charged the father of one $21 for three peaches, threatening the children with a chain gang if he caught them in his orchard again. A laborer working in a city at that time made less than $1.50 per day on average, making it likely that, for a black family in the South, those three peaches amounted to roughly a full month's wages. What was once freely available to African-American became "a white fruit," Okie says.

In addition to the cost of the trees and horticultural education, it took three or four years of expenses without income before trees would reliably produce fruit. Peaches required so much capital to grow that few African-Americans could afford to start their own orchard. When women were referred to admiringly as "Georgia peaches," it was a reflection of their light, rosy skin more than the state where they were from. (In an act of reclamation, a black gospel singer born in 1899 as Clara Hudman would go on to use the stage name "Georgia Peach.")

Of course, black labor was essential for the success of the peach crop, even if African-Americans were rarely credited for the importance of their work. Fort Valley State University, a historically black school in the epicenter of Georgia's peach region, would not have existed without the peach industry. It was created with the promise of educating African-Americans to be better workers in the orchards. But decades after its founding, it became a "Tuskegee-like institute" that was important for the Civil Rights movement in that region, Okie says. The college was involved in marches and demonstrations; Jo Ann Gibson, an organizer of the Montgomery Bus Boycott, was a 1936 graduate.

Many states remain associated with a particular food or agricultural product well after the product's importance has waned. Florida now grows far fewer oranges for consumption than many states, though the Sunshine state still produces a lot of juicing oranges. But these agricultural connections remain important for more than just marketing slogans or choosing a design for the state license plate.

"In a world of ephemerality and digital presence, there's something fundamental about the wind and the weather and the soil and microorganisms that make the environment we live in," Okie says.

For better or worse, Okie's book explains, peaches have become the story of the New South and its environment as much as cotton represents the Old. He adds, "To have a cultural icon with its roots deep in the physical landscape of the South is important."