Accessibility links
Sentencing Approaches for New England's 'Codfather' : The Salt Carlos Rafael was a fishing magnate in America's most lucrative port. As he faces sentencing for a scheme to cheat fishing quotas, many worry about the fate of local jobs if his empire is dismantled. 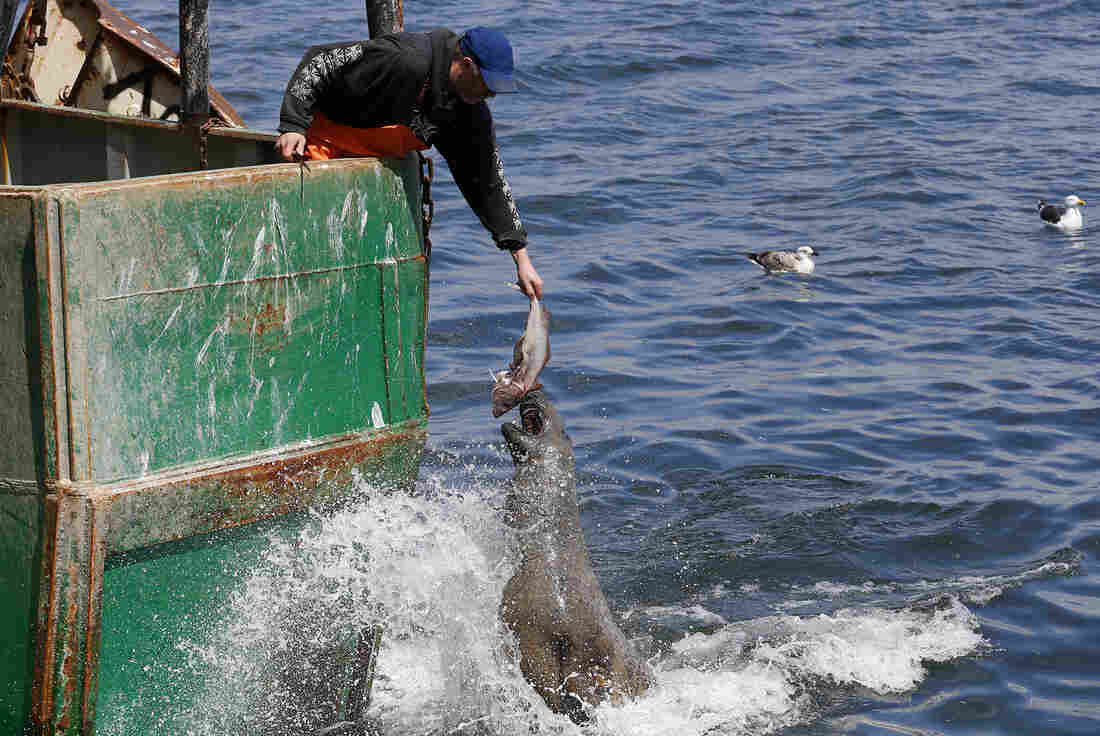 A fisherman holds out a fish for a seal off of a boat owned by Carlos Rafael in New Bedford, Mass. Rafael was the biggest fishing magnate in America's most lucrative port. As he faces sentencing for a scheme to cheat fishing quotas, many worry about the fate of local jobs if his empire is dismantled. Jessica Rinaldi/The Boston Globe/Getty Images hide caption 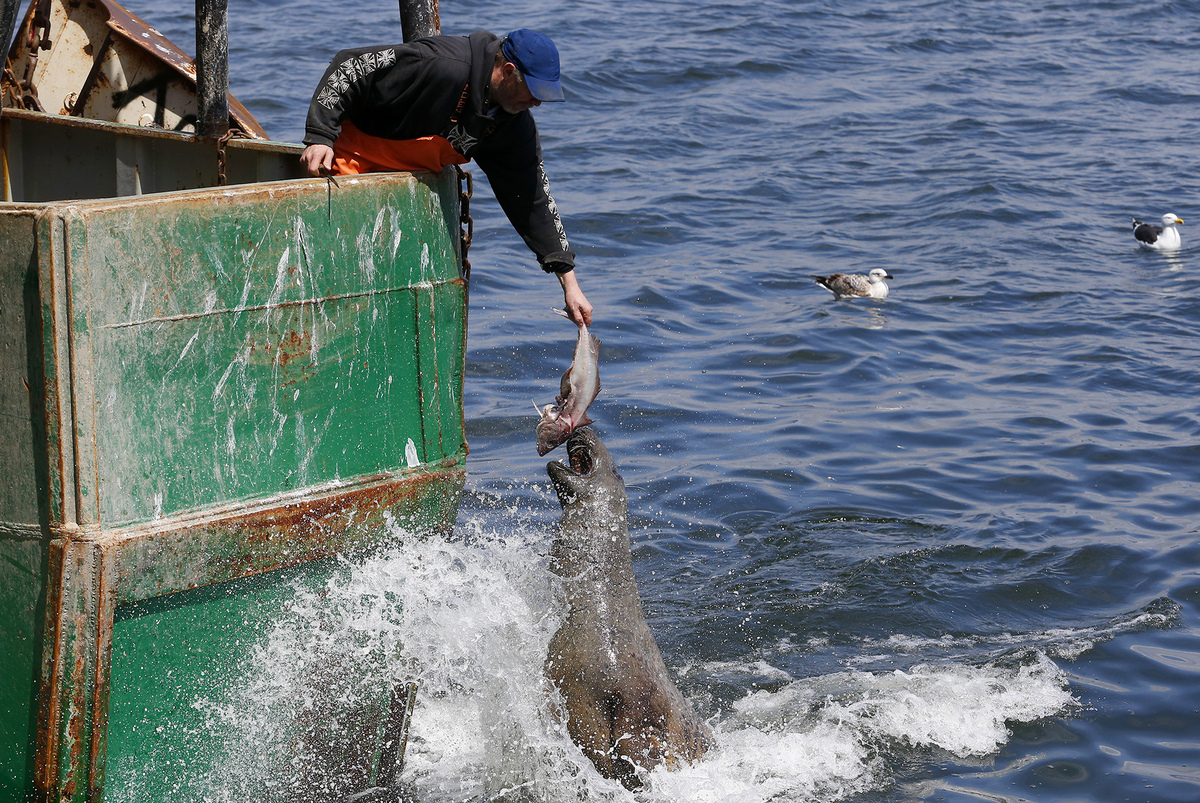 A fisherman holds out a fish for a seal off of a boat owned by Carlos Rafael in New Bedford, Mass. Rafael was the biggest fishing magnate in America's most lucrative port. As he faces sentencing for a scheme to cheat fishing quotas, many worry about the fate of local jobs if his empire is dismantled.

One of the biggest fishing magnates in the country could be sentenced to prison this coming week, and the forfeiture of his boats could be a big hit for the Massachusetts port where he amassed a small empire.

Between his scalloping and groundfishing boats, Carlos Rafael – nicknamed "the Codfather" — came to be the largest single owner of fishing vessels in New England, and possibly in the country.

But in 2015, undercover IRS agents posed as Russian criminals and convinced him they wanted to buy his entire fleet. Rafael unpacked an elaborate criminal enterprise to the agents — one he said he'd been carrying out for three decades.

Court records show that Rafael valued his business at $175 million. He told the undercover agents the value came from the way he cheated the government quota system. Rafael's men would haul in a more valuable fish — like cod — and report it as a cheaper species with a much greater quota. Now Rafael is facing prison time for counts including tax evasion and bulk cash smuggling — all of which he admitted to.

But people in New Bedford want to know: What will become of the 13 fishing boats — and all the permits attached to them — that were tied to Rafael's crimes? Will they be auctioned off on the open market, held by an entity such as the city of New Bedford or perhaps removed from circulation?

"I've been working for Carlos for 12 years now," says Richard Mauzerolle, who is in the spray foam business — he insulates holds on fishing boats owned by Rafael. He's one of hundreds of people in the area who work for Rafael.

"He's one of my main livelihoods right down in the area, so it'd be a shame to have him lose anything," Mauzerolle says. "He's brought this fishing industry back to where it was supposed to be down here."

Others have a less charitable take on Rafael. Brett Tolley, a community organizer with the Northwest Atlantic Marine Alliance in Gloucester, says the government should distribute the permits in a way that does not create a "Carlos 2."

"The level of consolidation and corruption and impact that Carlos Rafael has had has put fishing businesses out of business in Maine, New Hampshire, Massachusetts, Rhode Island, and you name it," says Tolley, who belongs to a fishing family dating back four generations.

"How his boats and permits get doled out, it's likely they will be consolidated into the hands of another Carlos Rafael. ... Our policymakers need to put in safeguards to ensure we do not have another too-big-to-fail scenario on the ocean."

Rafael is likely to hold onto his lucrative scalloping vessels, but 13 of his ground fishing boats are subject to forfeiture.

"Carlos Rafael is a scoundrel and he deserves to go to prison," says Jon Mitchell, who served as a federal prosecutor before becoming mayor of New Bedford. The city prides itself on having the most lucrative fishing port in the country. "The most important question right now is what happens to his permits."

According to Mitchell, Rafael's business represents 75 percent of the city's groundfish by value. Mitchell wants port officials in New Bedford to control Rafael's permits. That would keep his boats and all of the jobs in the city. But the permit could end up being put up for auction to the whole of the Northeast.

It'll be up to a federal judge in Boston to decide the fate of Rafael's fishing empire, on the same day he issues his sentence.