Accessibility links
Feeling 'Young, Scrappy And Hungry'? Have A 'Hamilton'-Inspired Meal : The Salt It was only a matter of time before fans of the Broadway hit sought out culinary tributes to their most treasured folk hero. Here are historically minded ideas to eat like the Founding Father. 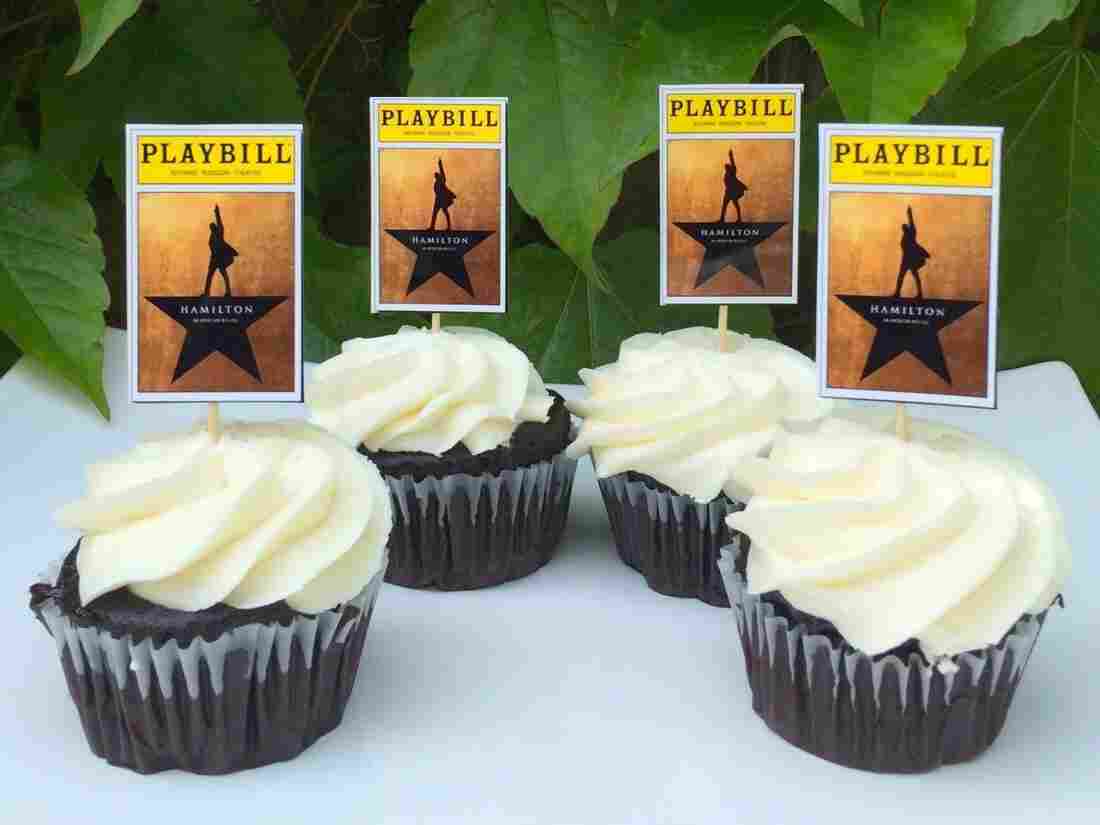 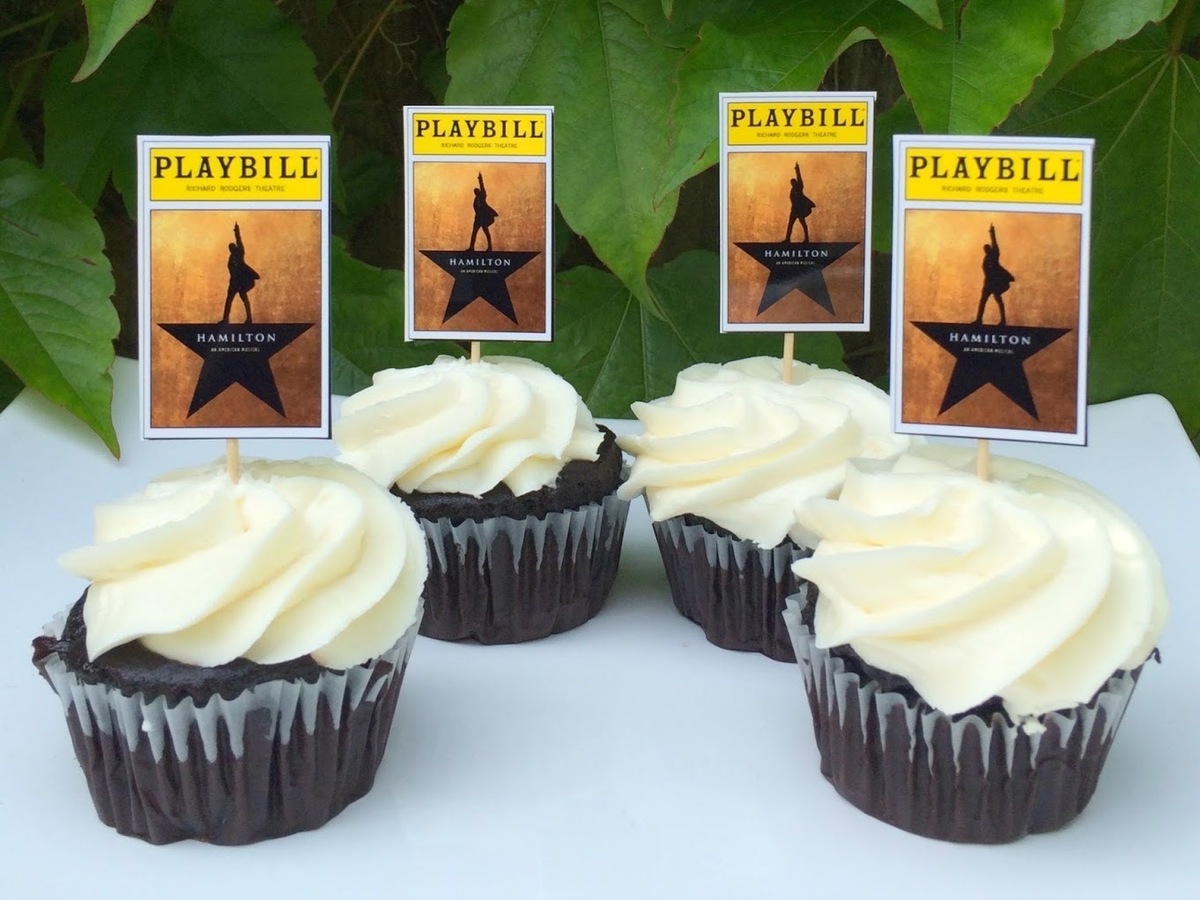 Hamilton-inspired cupcake toppers. It was only a matter of time before fans of the Broadway hit sought out culinary tributes to their most treasured folk hero.

There's nothing like fandom to encourage innovation, and the devotees of the Broadway hit Hamilton: An American Musical are no exception — whether they've actually seen the show in person or have memorized every lyric of the 46 songs on the soundtrack album. So it was only a matter of time before enthusiastic fans were going to search out culinary tributes to their most treasured folk hero.

While the "Founding Father without a father" doesn't seem to have been much of a foodie, his abbreviated signature has been enough to inspire an A. Ham Sandwich — yes, really. Historians have culled a handful of culinary references that have provided enough of a springboard for enterprising bloggers, mixologists and the parents of Hamilton-crazed kids determined to have a birthday party themed after the musical. You'll find plenty of suggested menus on Ye Olde Internet, from "Aaron Burr-gers" to "Hercules Mulliga-tawny Soup" — and who wouldn't want a trio of Schuyler Sisters cakes adapted from classic Barbie Doll cake recipes?

Of course, if you're a purist — and Hamilton would love a purist — then history has its eyes on you.

From a historical perspective, there are scant clues into Hamilton's diet, starting with the 18th-century bodega that his mother, Rachel, opened in 1765 on the island of St. Croix, when Alexander and his older brother, James, were boys. From here, she supplied local planters with salted codfish and pork, apples, butter and flour. After her death three years later, Rachel's two sons eventually went their separate ways. Working as a clerk in a trading house, Alexander, then a young teen, definitely showed an interest in food — but, as was his wont, primarily in terms of commerce, making hefty profits for the company by "tradin' sugar cane and rum and all the things he can't afford," as sung in the musical's opening number. 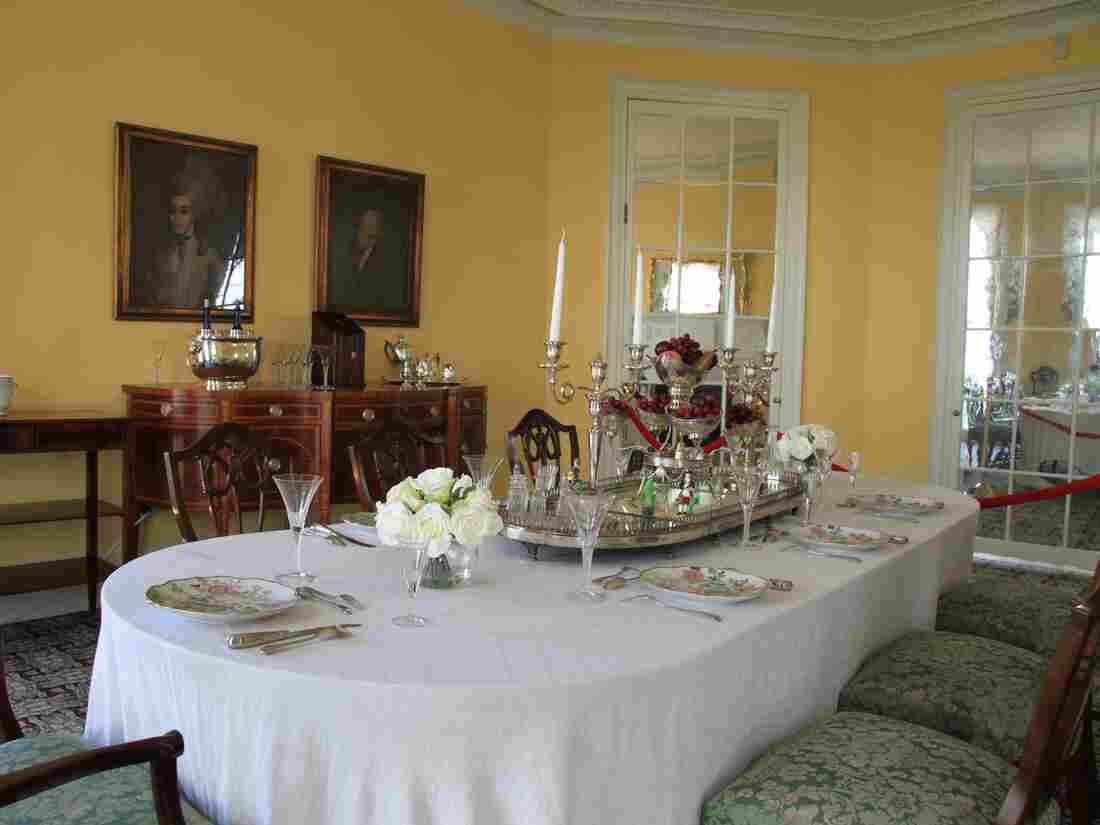 The dining room at the Hamilton Grange National Memorial in New York City. From a historical perspective, there are scant clues into Alexander Hamilton's diet. National Park Service hide caption 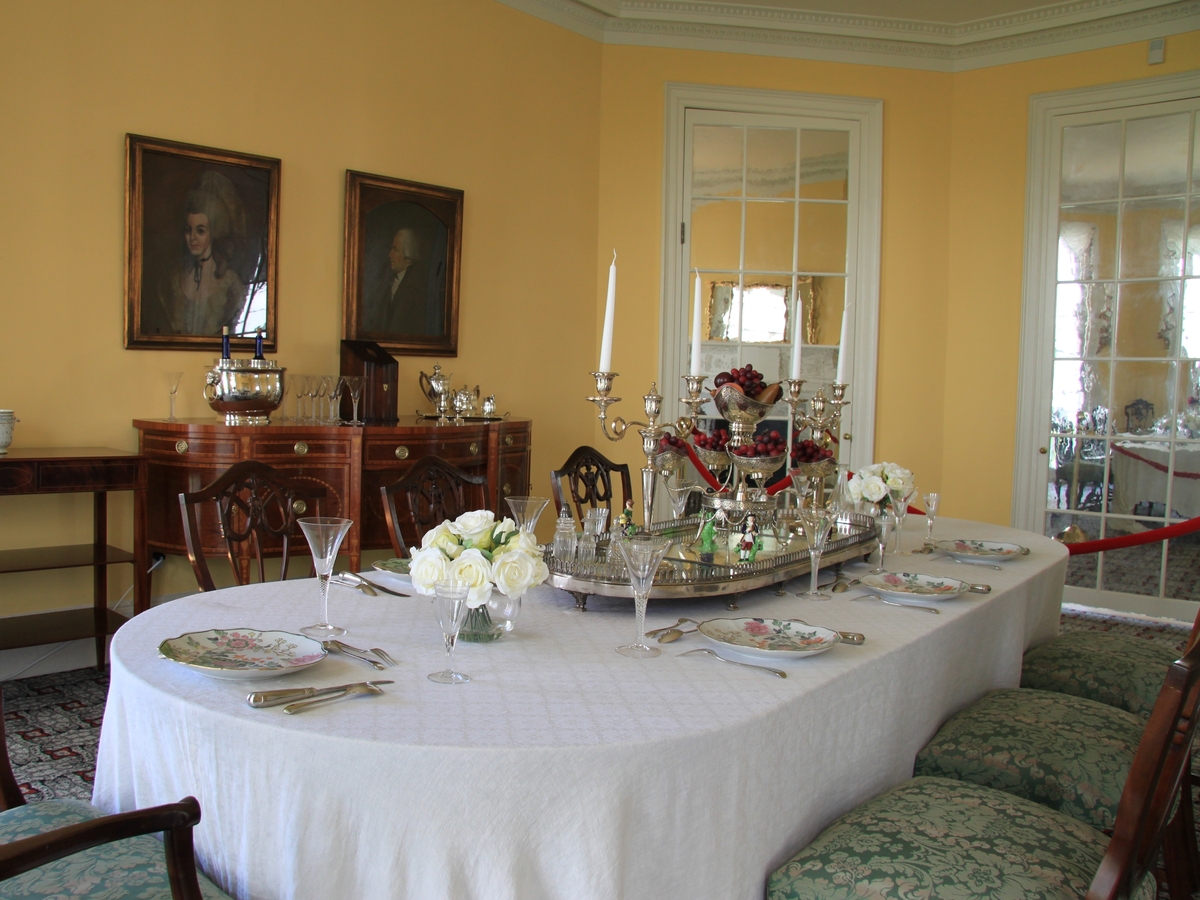 The dining room at the Hamilton Grange National Memorial in New York City. From a historical perspective, there are scant clues into Alexander Hamilton's diet.

Author Laura Kumin examines the cuisine of Hamilton's world in The Hamilton Cookbook, to be released in November by Post Hill Press, by delving into the food history of the time and gleaning scraps of insight from a variety of sources.

For instance, Hamilton's wife, Eliza, would have brought a Dutch influence to the family table, based on the ancestral traditions that she grew up with. Think hearty split pea soup served with rye bread, topped with Dutch-style smoked bacon.

Meanwhile, Kumin writes, a West Indian Pepper Pot Soup, as popular in Revolutionary-era Philadelphia as it was in the Caribbean, recalls Hamilton's island origins, and it turns out that Alexander and Eliza loved ice cream, introducing the dessert to George and Martha Washington when they hosted them for dinner in 1789.

Paterson, N.J., a city that Hamilton is credited with founding in 1791 as an industrial hub, is perhaps the site of the first documented Hamiltonian meal. Picnicking on the banks of the Passaic River in 1778 with Hamilton, Washington and the Marquis de Lafayette, aide-de-camp James McHenry wrote that the men feasted on a "modest repast of ... cold ham, tongue, and some biscuit. With the assistance of a little spirit, we composed some excellent grog." 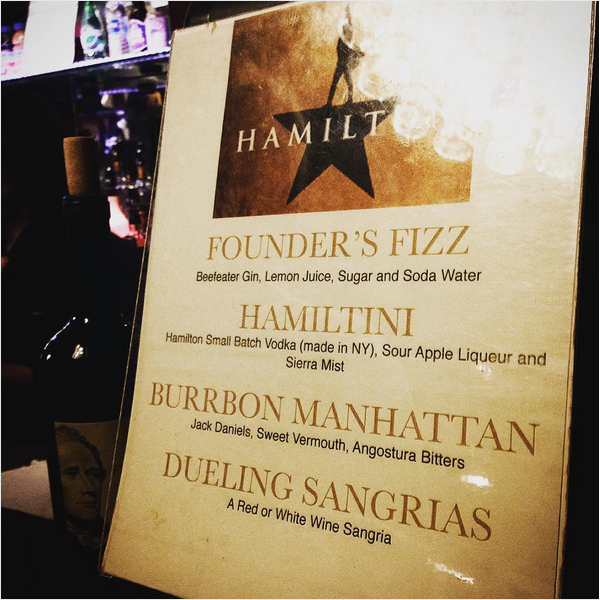 No stranger to grog and other libations, Hamilton and his friends did seem to frequently "raise a glass to freedom," inspiring plenty of modern drinking games – as well as the Broadway musical's cocktail menu. Some of the drinks to be had at the Richard Rodgers Theatre include the Hamiltini, featuring Hamilton Small Batch Vodka from upstate New York and the Founder's Fizz, a blend of gin, lime juice, sugar and seltzer. It's basically a classic gin rickey, which happens to be Washington, D.C.'s official cocktail. There's some irony to the fact that the Broadway version is made with British-made Beefeater Gin — perhaps just a tip of the hat to King George III. 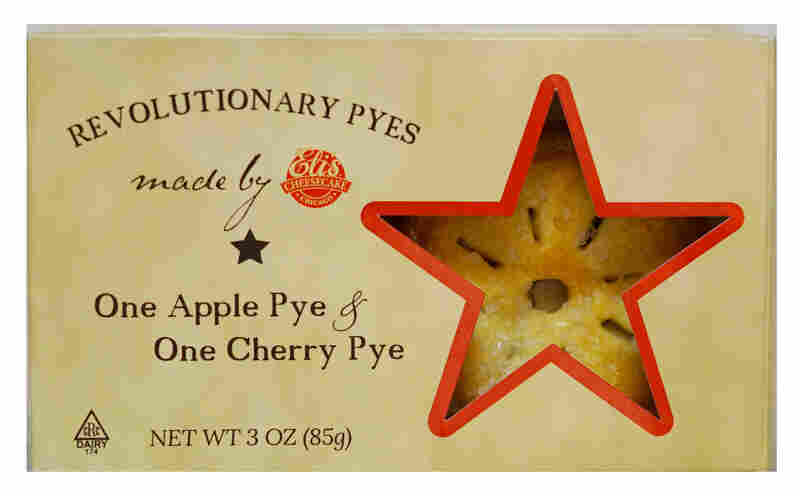 In addition to cocktails inspired by Hamilton, The PrivateBank Theatre in Chicago sells "Revolutionary Pyes" — as spelled in the 1800s. A pye lady walks through the aisles and the lobby carrying a large tray of the desserts. Courtesy of Eli's Cheesecake Company hide caption 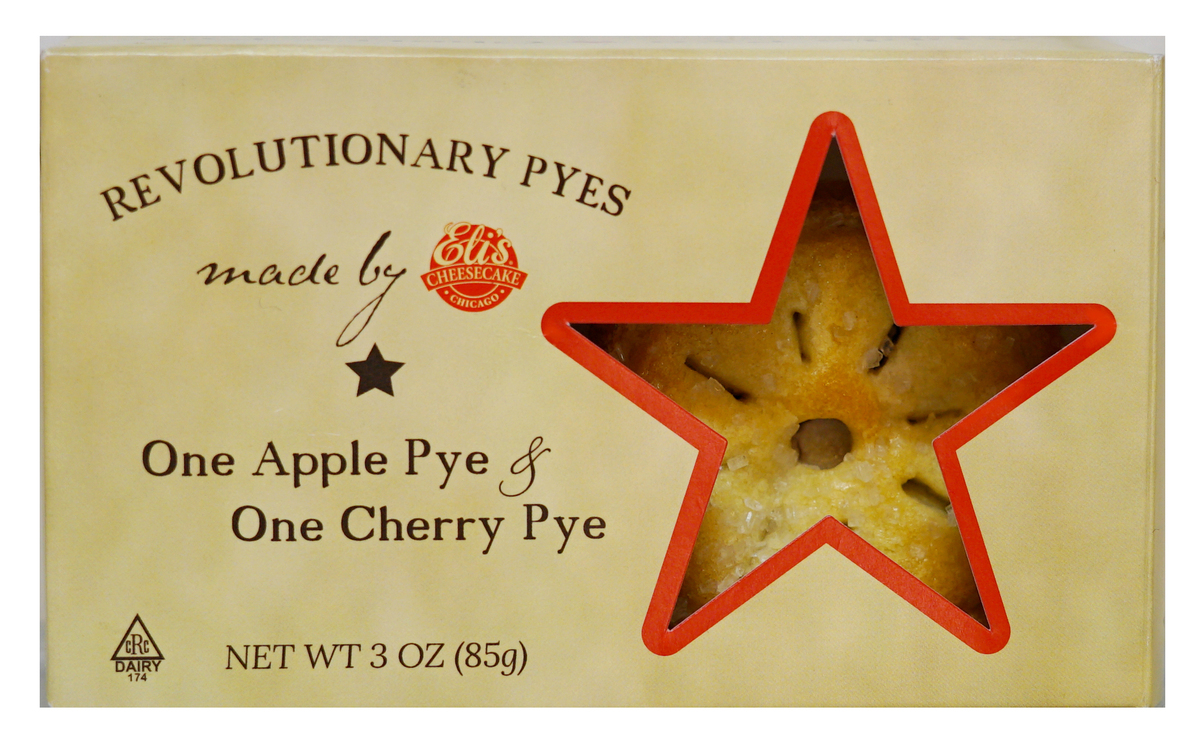 In addition to cocktails inspired by Hamilton, The PrivateBank Theatre in Chicago sells "Revolutionary Pyes" — as spelled in the 1800s. A pye lady walks through the aisles and the lobby carrying a large tray of the desserts.

Although imbibing liquor throughout the day was common during Hamilton's time, John Adams — no fan of the upstart immigrant, whom he referred to as the "bastard brat of a Scotch Pedler" — complained that the first secretary of the Treasury wasn't able to drink wine "without getting silly and vaporing about his administration like a young girl about her brilliants and trinkets."

Hamilton may not have been able to hold his liquor, but it appears that coffee was his true vice, anyway. Writing in his biography Alexander Hamilton, upon which the musical was based, historian Ron Chernow noted that Hamilton's java habit, as described by a contemporary, may have helped the Founding Father to write like he was running out of time:

"... having slept six or seven hours, he rose and having taken strong coffee, seated himself at his table, where he would remain six, seven, or eight hours. And the product of his rapid pen required little correction for the press."

The one person who may have actually impressed Hamilton at the dinner table was, ironically, his political rival — not Aaron Burr, but Thomas Jefferson. Often considered America's Founding Foodie, Jefferson, originally played in the musical by Daveed Diggs, liked to negotiate during meals. In the song "The Room Where It Happens," Diggs details the Compromise of 1790, also known as the "dinner table bargain" between Jefferson, Madison and Hamilton, singing, "Well, I arranged the meeting/I arranged the menu, the venue, the seating." 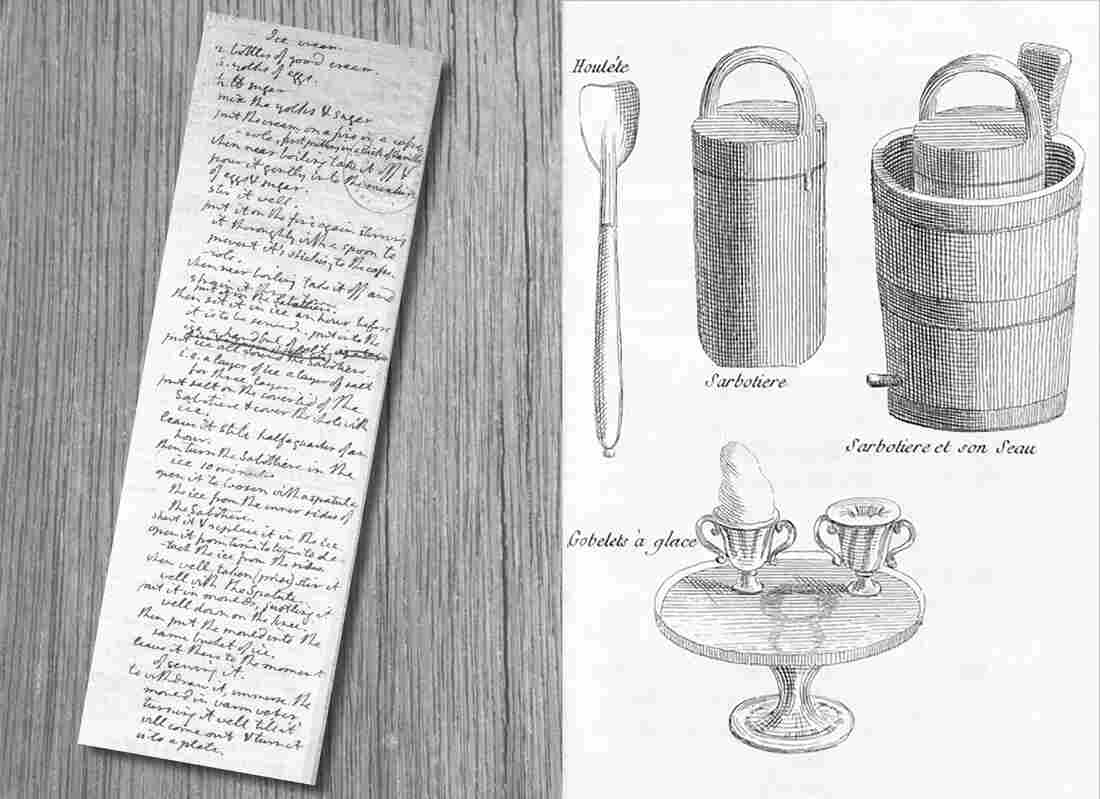 The proof of Jefferson's mastery of the art of the dinner party was in the pudding. As Charles Cerami recounted in his history Dinner at Mr. Jefferson's, guests, including Hamilton, were treated to extravagant menus filled with French flair — from capon stuffed with Virginia ham and chestnut puree with a cream-and-brandy-based Calvados sauce, to boeuf a la mode, a beef stew that was a staple at Monticello.

But clearly it was dessert that made Hamilton swoon:

"At the precise moment when the evening was approaching perfection," writes Cerami, "came the universally favorite dessert — the delicious vanilla ice cream that still seemed like a miracle, for it was enclosed in a warm pastry, like a cream puff, giving the illusion that the ice cream had come straight from the oven. It never failed to elicit cries from the groups of diners at Monticello, and it did not fail now. Even Madison gave a small squeal, and Hamilton positively exulted."

Still, if you don't have a sweet tooth, then there's only one other way to end a Hamilton-esque meal.

Yes, with a shot.

Kristen Hartke is a food and beverage writer based in Washington, D.C.