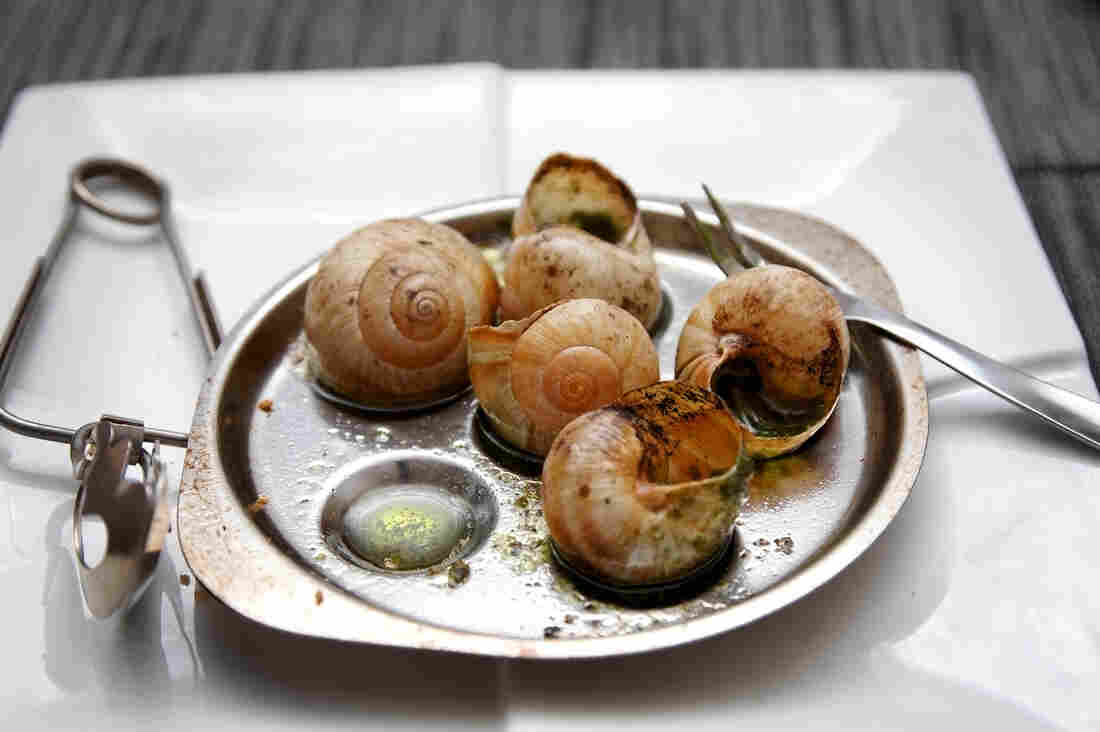 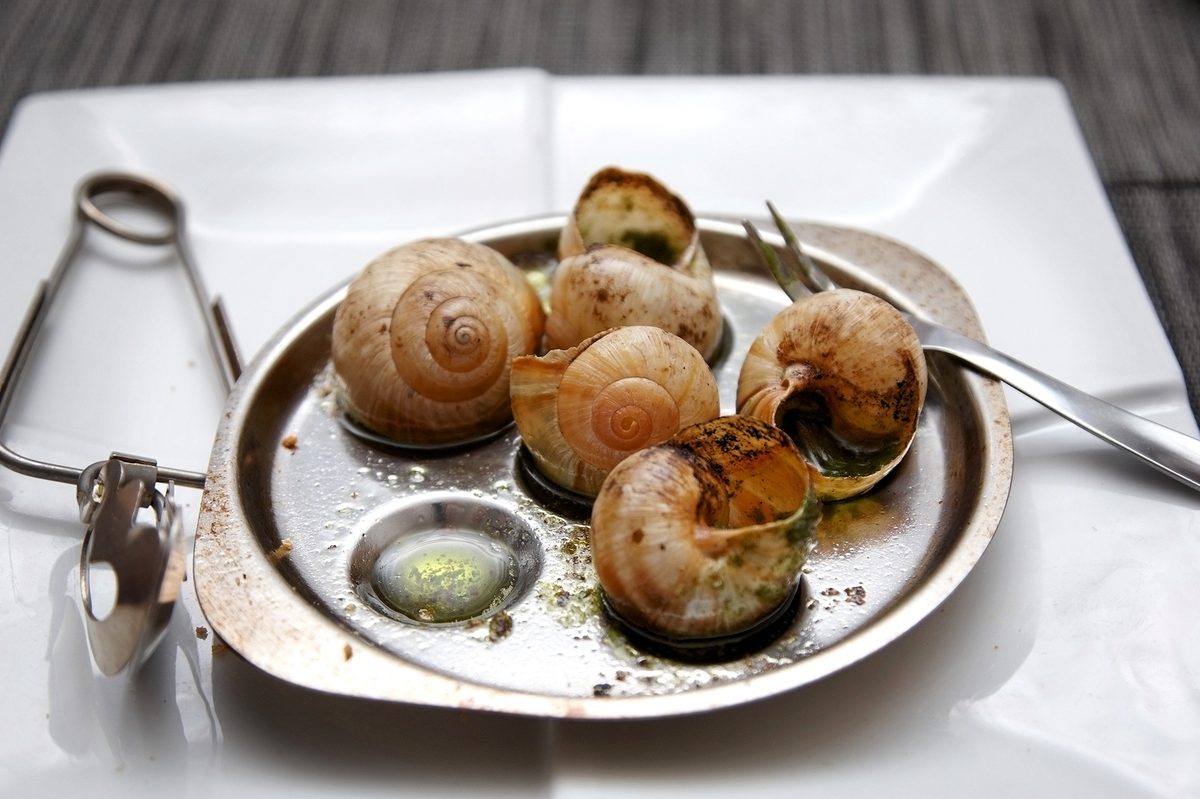 Cooked Burgundy snails in garlic butter. These snails are a popular French delicacy. These days they are imported into France from other European countries.

In a large, sparsely furnished room at a food processing plant in the town of Migennes, in France's Burgundy region, three employees prepare large snails for packaging. They take the snails' flesh, which is cooked separately, and put them into shells of the right size. They reconstitute about a thousand snails an hour, says Romain Chapron, the director of Croque Bourgogne, the company that owns this plant and sells a couple million snails each year. These cooked snails are shipped to grocery stores and restaurants, mostly in northeastern France, says Chapron.

These buttery and garlicky Burgundy snails, or escargots de Bourgogne, are a classic French delicacy; yet they aren't French any more. Every snail prepared by the employees at Croque Bourgogne comes from Hungary. In fact, all companies that sell this shelled delicacy in France import it from elsewhere in Europe. "One hundred percent of Burgundy snails you buy in France are picked in Central Europe," Chapron says.

Sometimes, companies go all the way to Ukraine to get these much wanted snails, says Pierre Commère, a general director at the Association Des Entreprises de Produits Alimentaires Elaborés (ADEPALE), an association representing 10 industrial scale food businesses that import Burgundy snails into France. And this is no sluggish business, bringing in 75 million euros (about 87 million dollars) annually to these 10 companies.

But the popularity of this imported delicacy has spurred the ire of French snail farmers, who are pushing to convince consumers to eat their locally raised, but less popular snails. 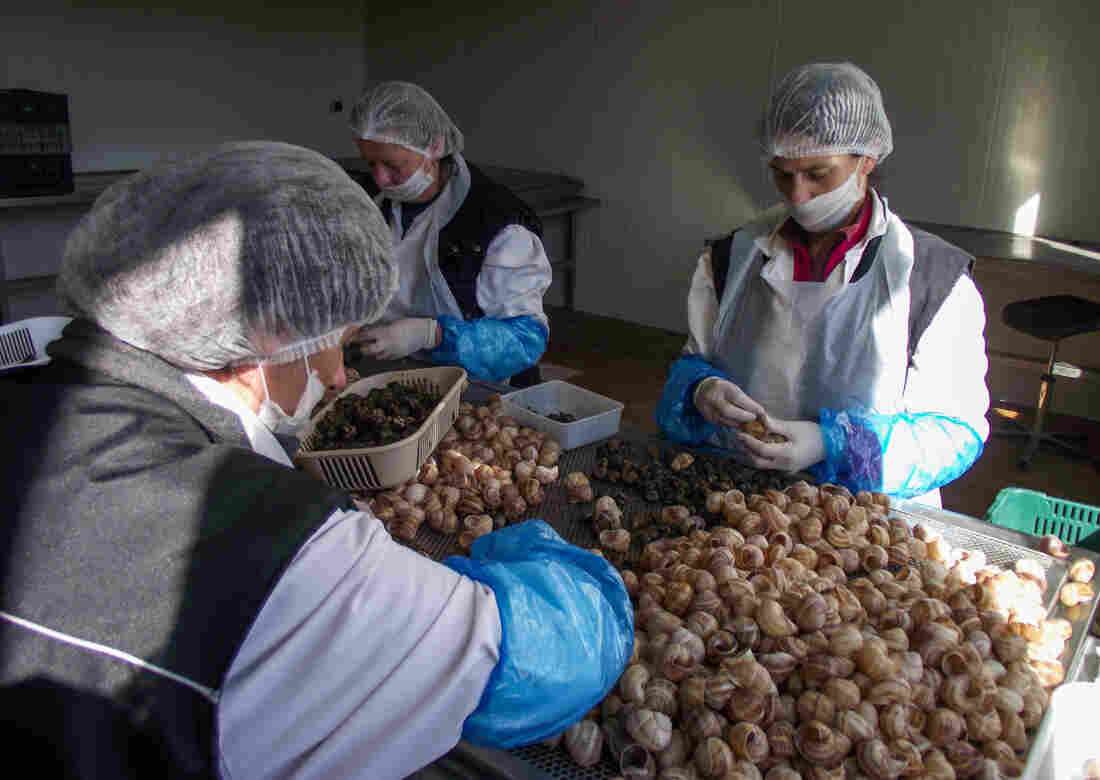 Employees at Croque Bourgogne put the cooked flesh of Burgundy snails into shells before being packaged and shipped to grocery stores in France. The company imports the snails from Hungary. Grégoire Molle for NPR hide caption 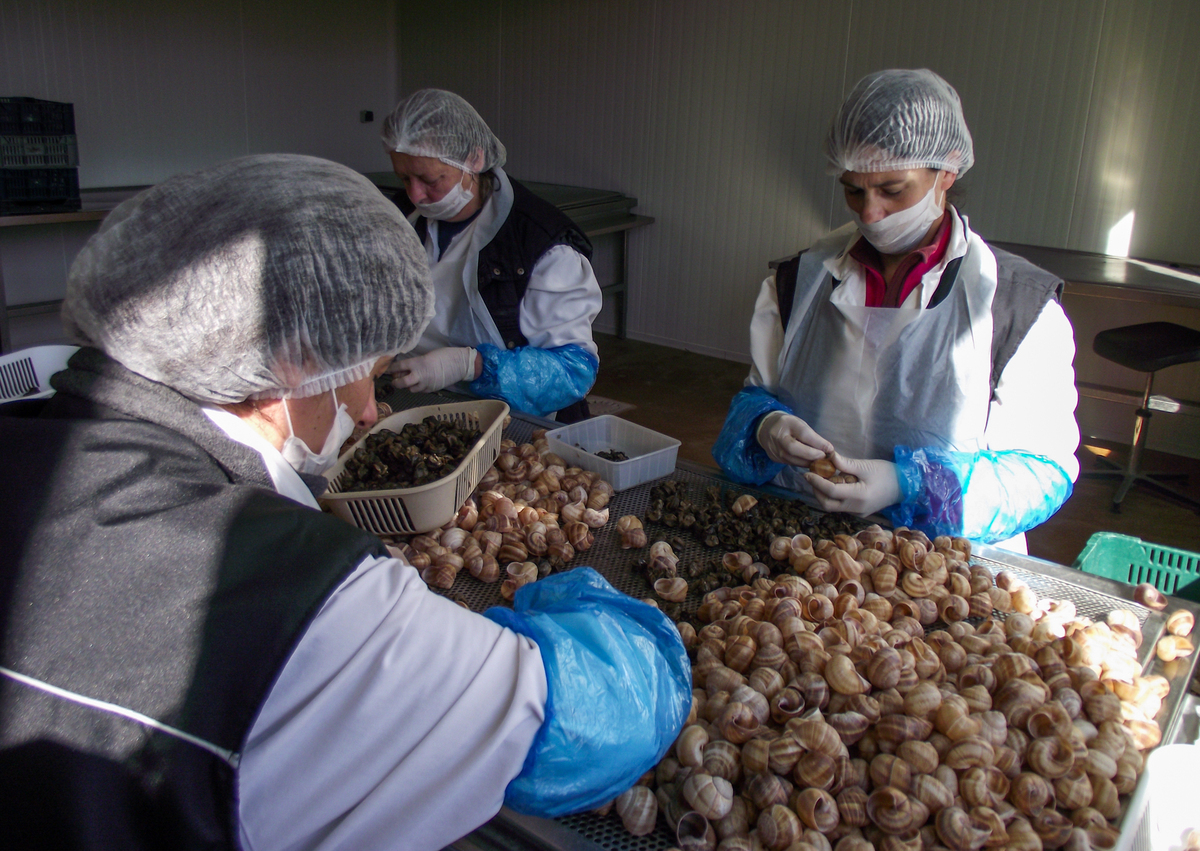 Employees at Croque Bourgogne put the cooked flesh of Burgundy snails into shells before being packaged and shipped to grocery stores in France. The company imports the snails from Hungary.

Escargots de Bourgogne is a snail species (Helix pomatia) that was once abundant in the region of Burgundy. A tourism book published this year suggests that the snails prepared in Bassou, a town in Burgundy, were sold to wine sellers in Paris, who helped make the dish popular back in the early 19th century.

But France's wild snail populations have declined in the past century. Excessive harvesting of Burgundy snails in the early 20th century contributed to this, as did destruction of snail habitat due to agriculture, roads and railroads. A 1979 law tried to protect snails by restricting the collecting of wild species for commercial purposes. All this led to growing imports of this prized delicacy in recent decades.

Customers love the Burgundy snail – it's delicious and cheap. But snail farmers want to promote French snails. Riding the wave of interest in local production and consumption, they are demanding large snail importing businesses to specify the origin of their snails in labels. The law currently does not require these businesses to disclose this information.

"The French are well-known for being consumers of snails, so they might as well eat a snail from their own country", says Carole Milan, a snail farmer and the president of ASPERSA, an organization representing more than sixty gastropod farmers.

There are around 300 snail farmers in France and they represent only five percent of the market. They mostly farm lesser known species because the Burgundy snail is impossible to farm. They mostly raise the "petit gris" and the "gros gris," meaning "little grey" and "big grey" respectively. In the world of snail business, these two are underdogs.

In 2013, a group of snail farmers petitioned for legislation to make it compulsory for companies to indicate where their snails come from.

"It's a topic that upsets me, because it's almost anti-European racism", says Chapron, "We import [Burgundy snails] from Europe, because it's in Europe that we find them."

To him, the attack on Burgundy imports is a"cry of hunger" from snail farmers. He thinks that when some farmers "couldn't make ends meet," they needed to find someone to blame "People who prepare Burgundy snails, who import raw material from abroad," were convenient culprits, he says.

Milan insists that the issue is "about transparency for consumers," but admits that snail farmers would like to be bigger players in the snail game.

The issue gained enough traction back in 2013 that a few lawmakers voiced the snail farmers' concerns in the French parliament. But it didn't achieve what farmers like Milan had hoped for. Disclosing snails' origins remains optional, although some companies, like Croque Bourgogne, do indicate this information on their packaging.

Snail farmers seem to be coming to terms with their defeat in the fight. While the big food companies supply Burgundy snails to grocery stores, farmers rely on "direct selling," which gives them an opportunity to give "an explanation of our savoir-faire," says Milan.

Denis Petit, who raises about four tons of "big grey" snails a year on his farm, is all for teaching his clients about what he does. A couple of months ago, he started traveling across France and Belgium in a food truck, where he cooks snails from his farm with butter, garlic, parsley, shallot, salt and pepper. He carries with him educational material explaining snail farming. The clients "drink a bit of Chablis wine, they eat snails," he says. At the same time, they watch a fifteen-minute film explaining how he runs his farm and how the snails are raised, killed and prepared.

Petit isn't concerned about the competition from large snail importers. His business is mostly local – he sells to individual customers and restaurants. "Short food supply chains are fashionable these days," Petit says.

Carole Milan admits that there is space for both farmers and bigger producers. "Given the amount French people eat, there is no other option but to go and find [snails] elsewhere," she says.

Besides, even the farmers' snails aren't necessarily native. For example, the "big grey" species that some of them breed, originated in North Africa.