Accessibility links
Perdue Farms Signs Up For A Chicken Welfare Revolution : The Salt The poultry industry may be on the verge of adopting ambitious new animal-welfare standards, giving chickens more space and daylight, and even returning to older, slower-growing chicken breeds.

Perdue Farms Signs Up For A Chicken Welfare Revolution

Perdue Farms Signs Up For A Chicken Welfare Revolution 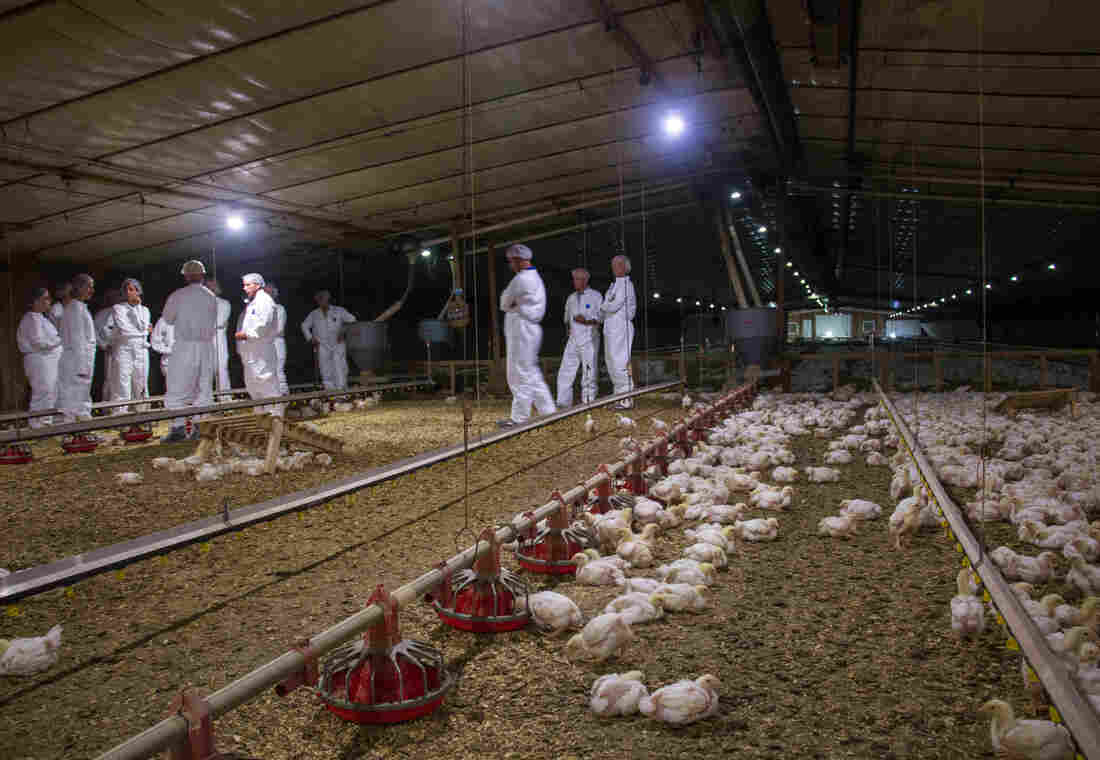 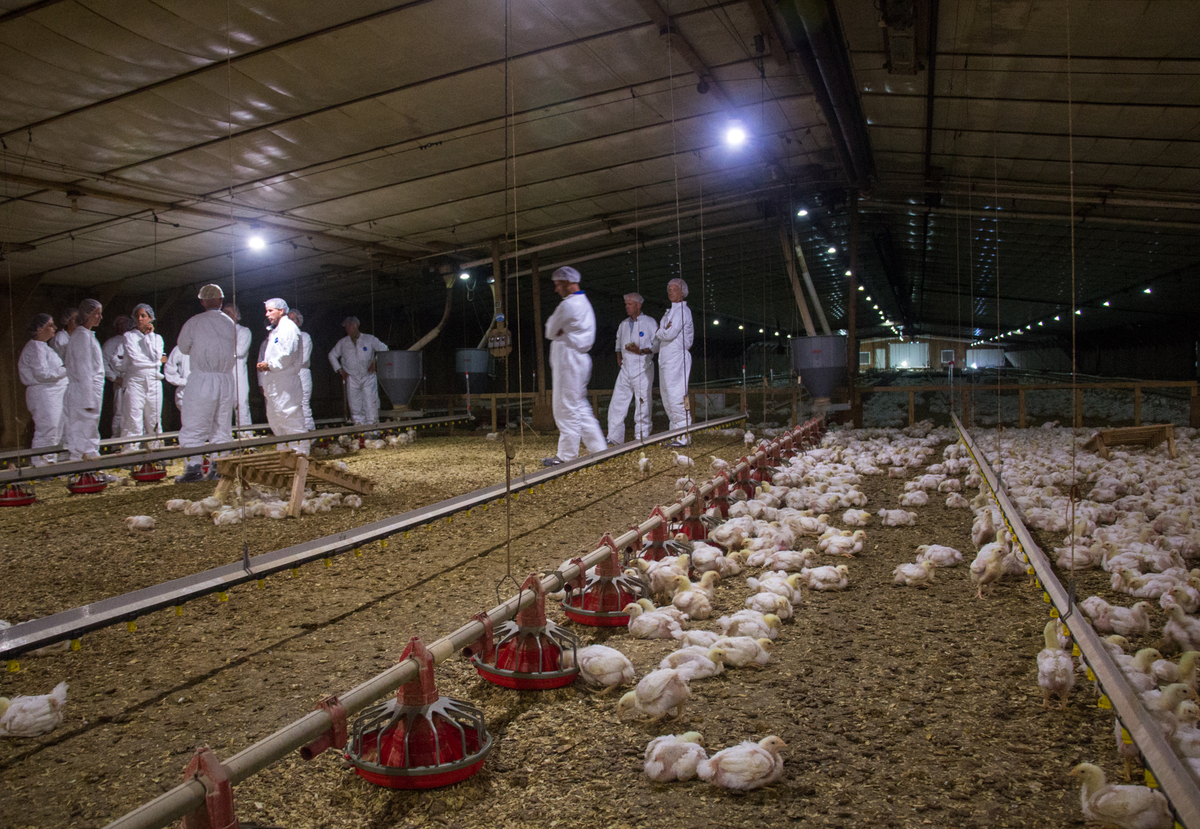 In a vast, dimly lit barn near Frankford, Delaware, surrounded by tens of thousands of young chickens, about a dozen people in ghostly white coveralls are considering future options for the poultry industry.

Executives from Perdue Farms, the fourth-largest poultry producer in the country, have set up this tour. Their guests include some long-time foes: people who lead influential animal welfare organizations like the Humane Society of the United States, Compassion in World Farming and Mercy for Animals.

They're here because Perdue, breaking ranks with the rest of the industry, has endorsed a major shift in the way it treats its chickens, and it wants to show off what it's done so far. Animal welfare advocates would like to force much of the industry to follow the same path.

This tour involves a side-by-side comparison of two chicken houses. We're in one that's set up to represent typical industry practices. Right next door, though, is Perdue's version of the future, and a Perdue executive, Mike Leventini, leads us into it. 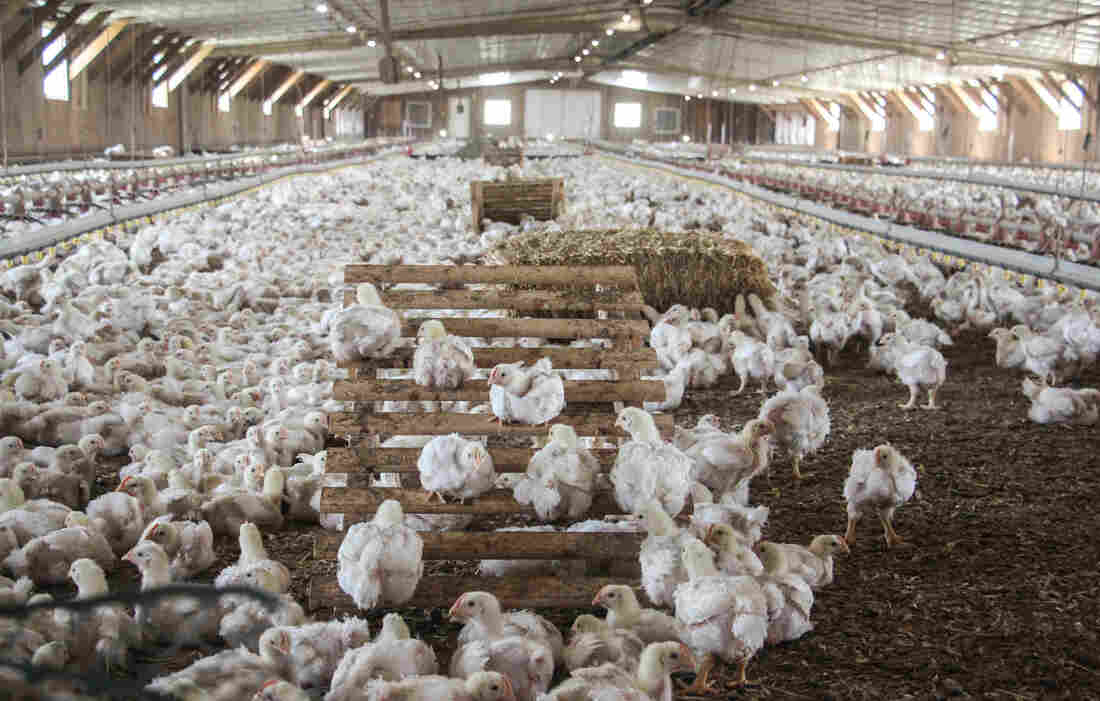 This chicken house is filled with natural light, thanks to windows. Dan Charles/NPR hide caption 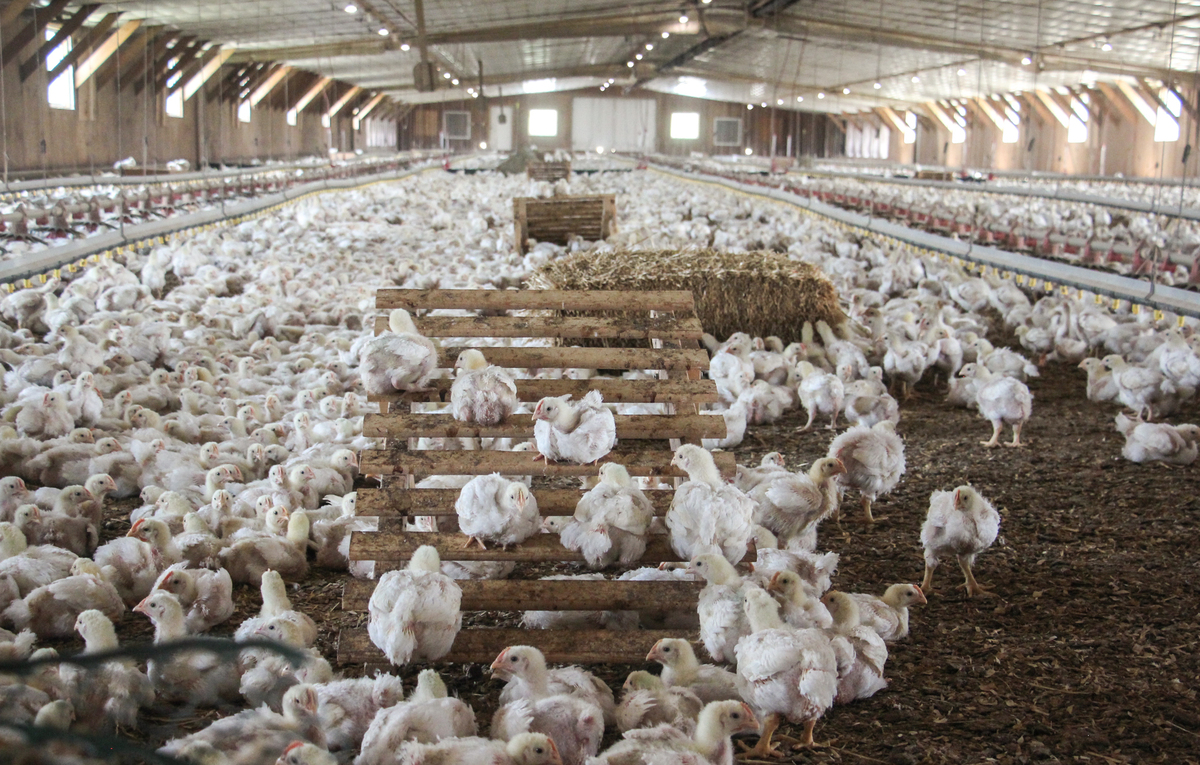 This chicken house is filled with natural light, thanks to windows.

"The first thing you see is, there's windows, right? You get a feel for how much light's in this barn," Leventini says.

He points to the chickens. "They're flapping their wings, they're running around, they're hanging out."

Some of the chickens have climbed up on straw bales; some are perched on little wooden ramps. Others are hiding inside small wooden boxes. Those features don't exist in industry-standard houses.

Leah Garces, executive director of Compassion in World Farming, seems impressed. "It's a big difference," she says. Chickens in the house with natural light are "running around, climbing on things, pecking, perching." Birds in the windowless house, by contrast, are "quiet, they're sitting, they're not moving."

Perdue executives say they're making these changes for a couple of different reasons. First, they've decided that when chickens are more active, their meat is of higher quality. Jim Perdue, the company's chairman, says they learned this while raising chickens according to organic rules. "We're finding that meat from organic chickens is better," he says. "More tender. Different color. Activity is the key. [Organic chickens] are more active, they're running around." 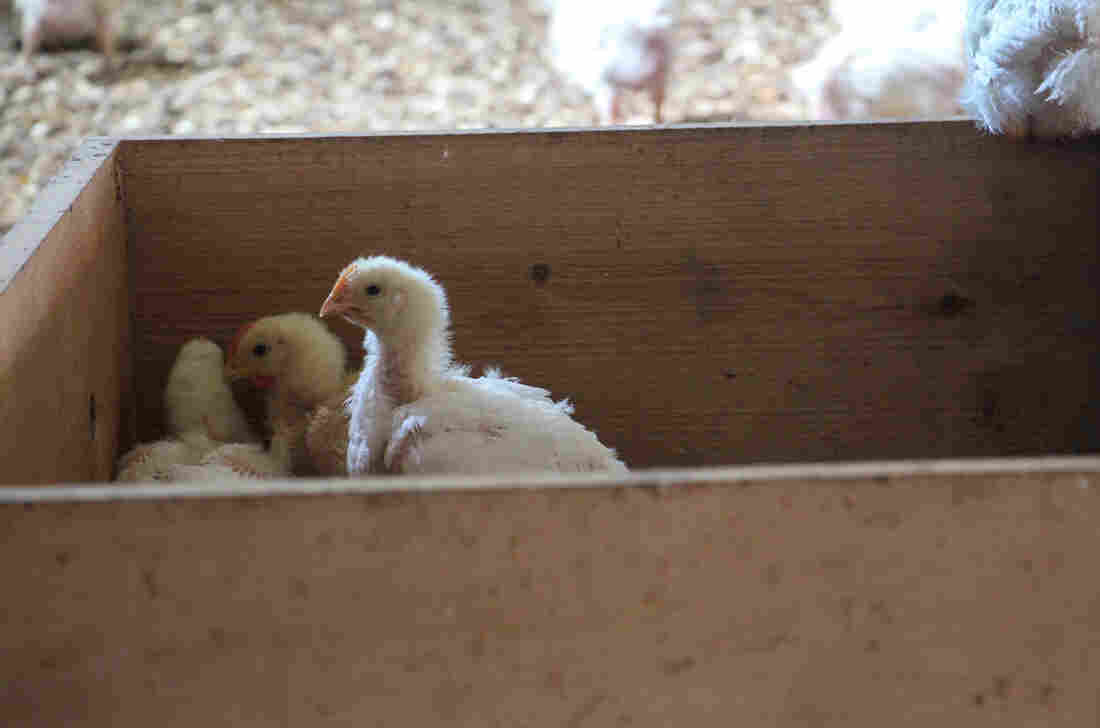 Young chickens hide inside a wooden box, one of the "enrichments" that Perdue is adding to its chicken houses. Dan Charles/NPR hide caption 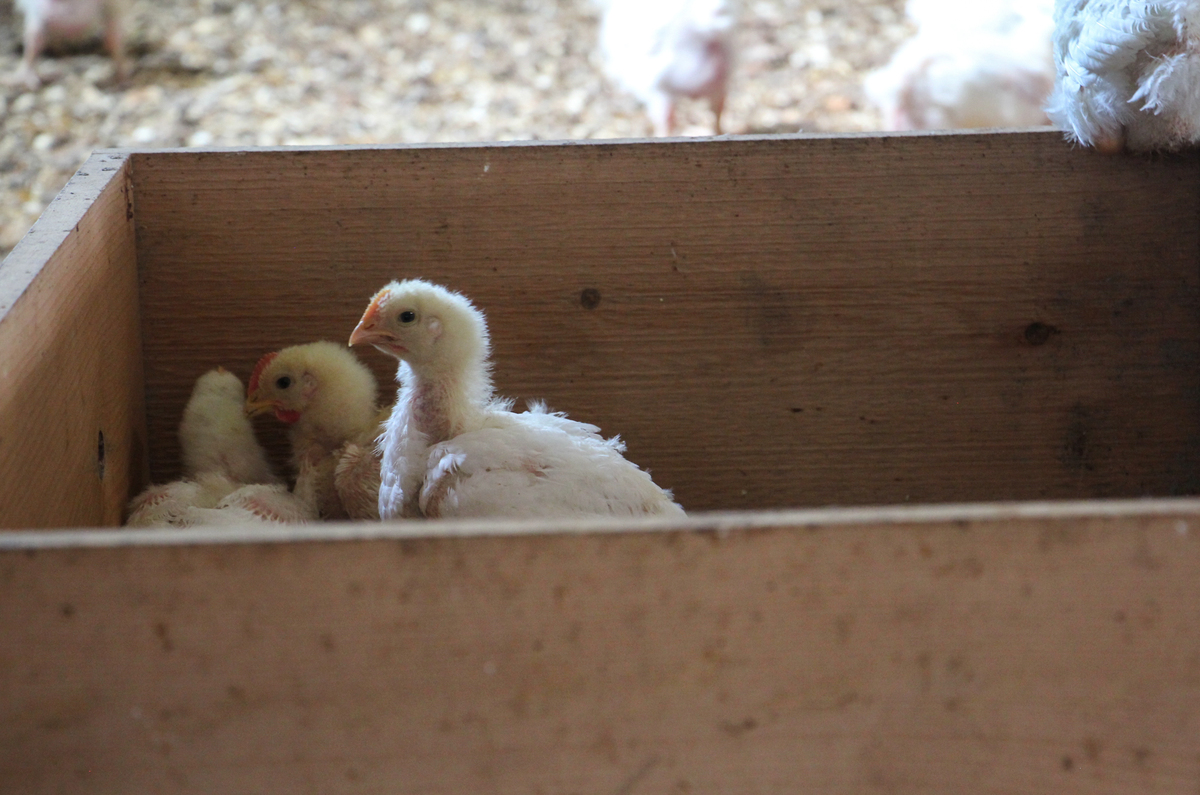 Young chickens hide inside a wooden box, one of the "enrichments" that Perdue is adding to its chicken houses.

But Perdue is also responding to pressure from some big corporate customers. These are food service companies that operate cafeterias in companies and other institutions. Several of them, including Aramark and Compass, have announced that by 2024, they'll only buy chickens from companies that give their chickens a better life.

An executive from one of those companies is here: Maisie Ganzler, from Bon Appetit Management Company, which buys millions of pounds of chicken a year for its corporate cafeterias and museum cafes.

"We've all made our commitments," Ganzler says. "What's next is to live up to the commitments we've made, and I don't say that flippantly; that is a real challenge."

The food service companies say they'll require their chickens to be raised according to new animal welfare rules that have been set by the Global Animal Partnership, an organization that was originally launched by the grocery chain Whole Foods.

That means, in addition to natural light in chicken houses, a new slaughtering process that uses gas to make the birds unconscious before they're killed. This would replace electrical stunning, in which the birds are hung by their feet on a kind of conveyor belt and their heads come into contact with electrically charged water.

Perdue is moving toward satisfying all those requirements. Another part of the new standard, though, will be harder to satisfy.

It involves growing a different kind of chicken that can run and jump more easily because it doesn't put on weight so quickly.

On the left, a Sonoma Red heritage breed; on the right, a fast-growing Cobb breed. Dan Charles/NPR hide caption

Bruce Stewart-Brown, a veterinarian and senior vice president at Perdue, shows me another side-by-side comparison: two small pens of chickens, one containing the kind of chicken the industry grows now, and the other pen stocked with an older "heritage" breed called Sonoma Red.

I can tell, just by looking at them, that the industry-standard white birds are much more plump, even though all of these chickens are about 41 days old.

Stewart-Brown gestures toward the pen filled with plump, white birds. "I'm going to guess that that bird is already two pounds heavier than this [Sonoma Red] bird," he says.

These chickens are the product of breeding, selecting chickens that put on weight as fast as possible. "They're just bred for appetite, bred to eat," Stewart-Brown says.

That's great for efficiency of meat production, but these chickens grow so fast that their bones have a hard time supporting their weight. The white birds aren't moving around nearly as much as their slimmer companions. Fast-growing breeds of chickens also are more likely to suffer from leg ailments and other health problems.

The new animal welfare standard from the Global Animal Partnership demands that companies use slower-growing breeds — but it hasn't yet decided exactly which breeds will be meet its standard. And Perdue hasn't promised to meet that standard. "It's really interesting to sign up for something that's not yet decided," Steward-Brown says wryly. "Kind of uncomfortable." The company is, however, studying half a dozen alternative chicken breeds at a research farm.

Switching to slower-growing chickens could have a big impact on the business. It would take more time and more feed to produce each pound of chicken. 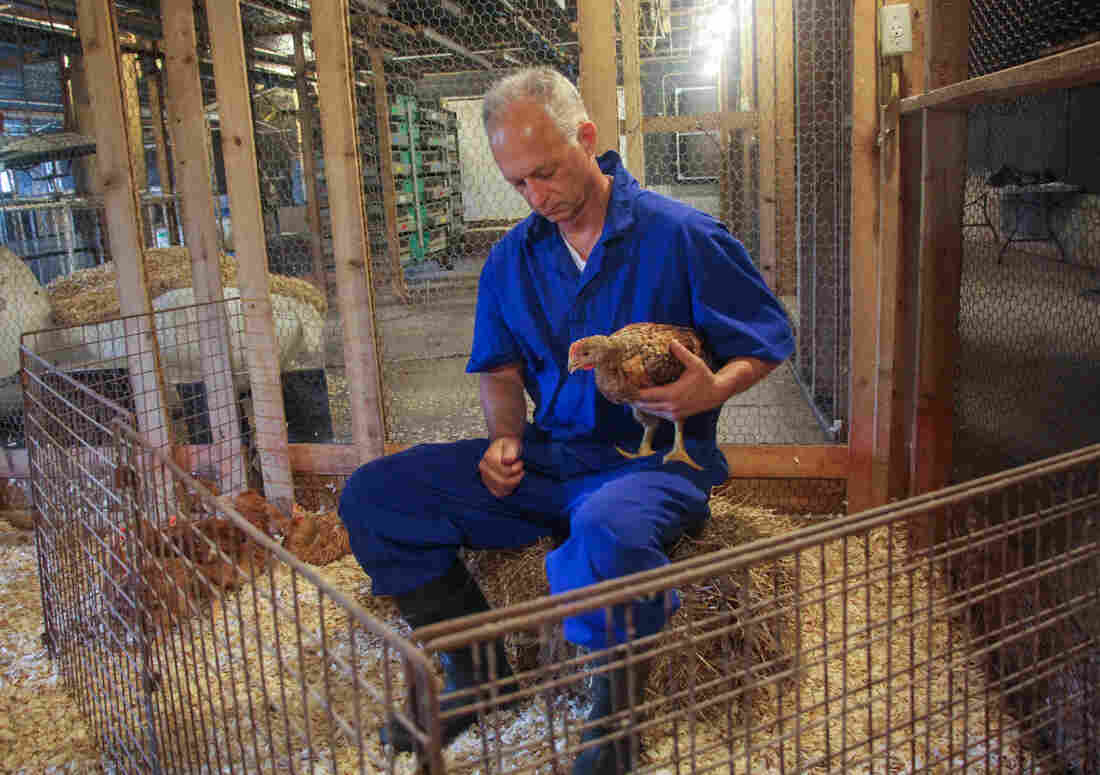 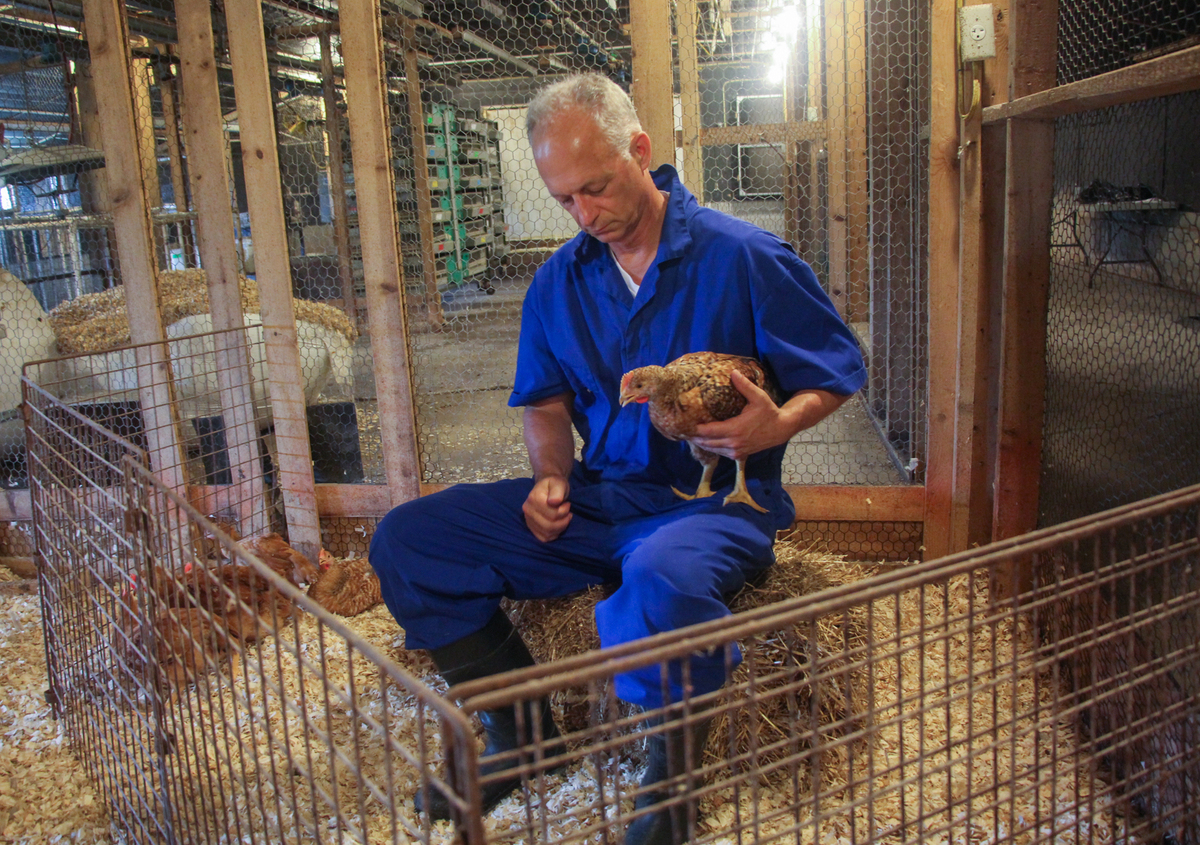 Also, heritage breeds tend to have bigger legs and less breast meat. So if consumers want Perdue to change its chickens, they may have to change a little, too, Stewart-Brown says. They may have to pay more for poultry, or eat more dark meat.

It's conceivable that this could happen, Steward-Brown says. "Dark-meat eaters are growing, and generally looking for flavor, right? They should be pretty excited about this bird."

Animal welfare advocates like Leah Garces are confident that consumers will force the poultry industry to change, in the same way that the egg industry was forced to shift away from keeping birds in cages. In five or 10 years, she says, slower-growing chickens will be as common as cage-free eggs.

A previous version of this story misspelled Frankford, Del., as Frankfort.