Accessibility links
Craft Beer, Brought To You By Big Beer : The Salt More than a dozen of America's most popular craft breweries have been bought by global beverage companies in recent years. Craft beer brewers say they're under attack by what they call "Big Beer."

Craft Beer, Brought To You By Big Beer

Craft Beer, Brought To You By Big Beer 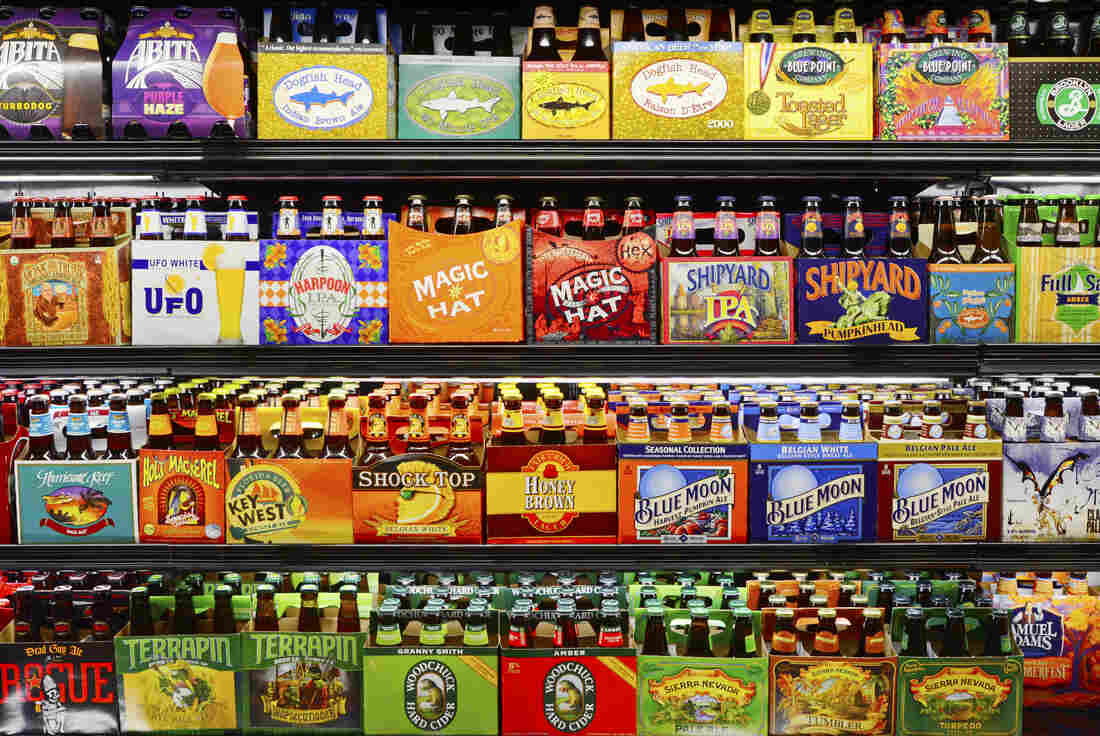 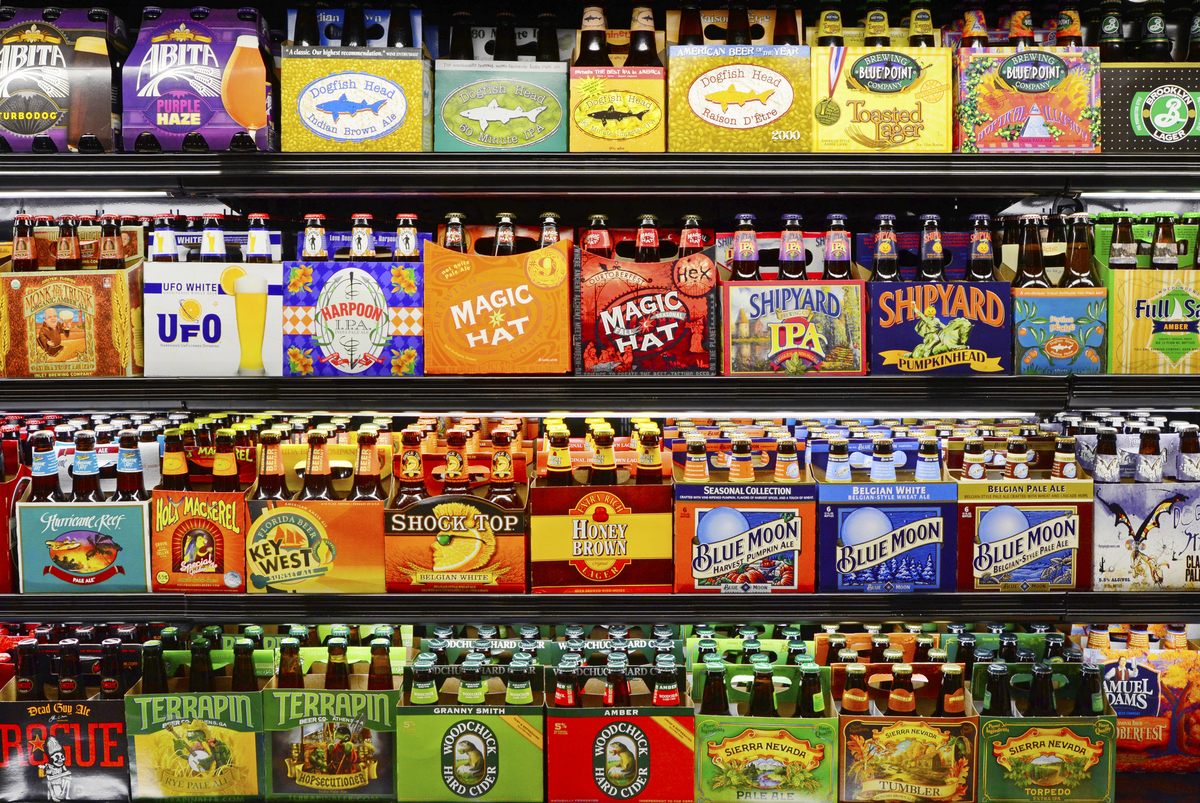 You may not be aware that Ballast Point Brewing Company, famed for its Sculpin IPA and fruity renditions of the same beer, was bought in 2015 for $1 billion by Constellation Brands, the company that owns Corona. Or that Lagunitas Brewing Company is now owned fully by Heineken or that Goose Island has since 2011 been a brand of Anheuser-Busch InBev, the global brewing giant that owns Budweiser.

These are just three of more than a dozen of the country's most popular and beloved craft breweries that have been purchased by global beverage companies in the past seven years. Indeed, beer brands recently purchased by larger companies now almost dominate many supermarket or liquor store shelves.

It isn't clear how many consumers know this is happening or whether they would care if they did. It also remains to be seen how these transactions will affect how the newly acquired brands taste.

But one thing is clear to craft beer brewers, lovers and lobbyists: They feel they're under attack by what they bitterly call "Big Beer" or "Big Alcohol."

"So in 2011, AB InBev hit on this strategy of just buying the breweries that had the kind of mojo or street cred that they weren't nimble enough to replicate in their own breweries," he says.

The way Pease sees it, this system of taking ownership of craft brands has allowed larger beverage companies to strategically pressure beer distributors and retailers into dropping independently owned beers in favor of their own newly acquired brands. As a result, Pease says, small craft brands are being squeezed out of warehouses, delivery vans and, ultimately, supermarkets as shelves become increasingly stacked with what detractors like to call "crafty" beer.

"You'll find Goose Island on tap practically everywhere across the country, and you'll say, 'I didn't know they were that popular,' and they aren't," Pease says. "The distributors are just pushing these brands out there."

Felipe Szpigel — president of The High End, a business unit of Anheuser-Busch — was unavailable to speak by phone. But in an email, he says the United States "is the most competitive beer market in the world" and he indicates that the market is a fair one.

"We are partners with just 10 craft breweries, and work with the entire industry to encourage growth and choice," he writes. "The verdict on each craft beer will be made by consumers. No amount of distribution or promotion will keep substandard beers on the shelf."

Christian Kazakoff, brewer at Iron Springs Pub and Brewery in Fairfax, Calif., says the changing landscape of craft brewery ownership has made it harder for breweries like his to get their beer into retail spaces.

"We really have to hustle now," Kazakoff says. He says some small breweries have resorted to serving their beer strictly at their own brewpubs because competition on the retail market has become so stacked against companies without strong market leverage.

To Tom McCormick, executive director of the California Craft Brewers Association, a trade group that represents more than 500 of California's 800-plus craft breweries, it's obvious that small craft breweries are taking a hit as Big Beer knocks them off shelves.

"Craft breweries used to have to compete among themselves," McCormick says. "Now, big breweries are taking this if-you-can't-beat-them-buy-them approach, and all of a sudden, retailers are carrying 10 Barrel, Elysian, Goose Island and all the other brands now owned by AB InBev, when there are plenty of other good brands made by small local breweries."

From the consumer's perspective, all of this may not matter. For instance, even in the wake of Heineken's total buyout of Lagunitas, McCormick suspects the quality of the beer produced by Lagunitas' breweries (one in Chicago, one in Petaluma, Calif.) will remain the same, because — according to the brand's founder, Tony Magee — the beer will continue to be made by the same staff on the same equipment.

"With Lagunitas, I don't think the new ownership is going to change anything," McCormick says. We should note that Lagunitas is an NPR sponsor.

But he is less confident that the quality of other former craft brands will be sustained under new management.

"In the case of Anheuser-Busch, they're now brewing some of those brands they've bought in their own facilities, and I think that will change how the beer tastes," he says. "With Ballast Point, some of those recipes, because they have so many hops, are going to be very difficult to produce at the larger scales they've projected."

Szpigel, at Anheuser-Busch, promises that the company's quality-assurance processes will keep the flavor and consistency the same in acquired brands now being brewed on AB InBev equipment, like Elysian and Goose Island.

Representatives from Constellation Brands said they were unavailable to comment. 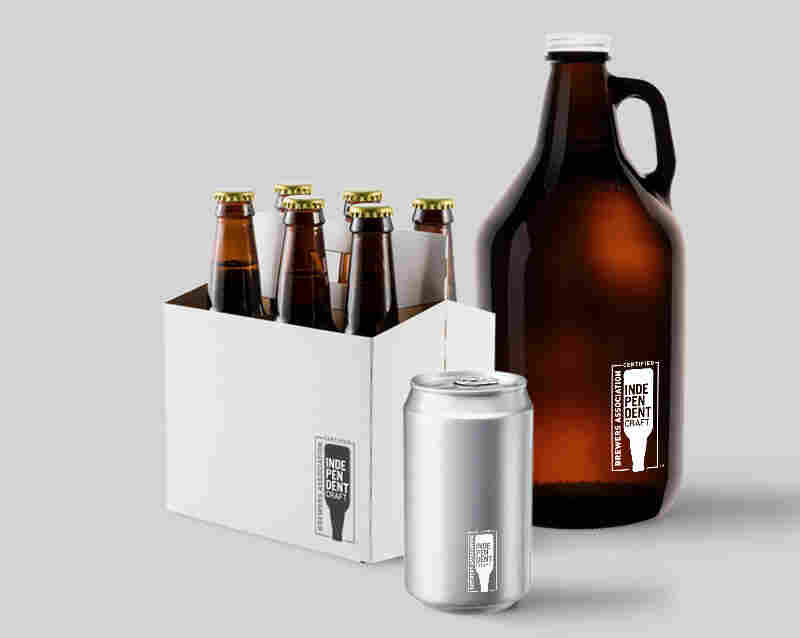 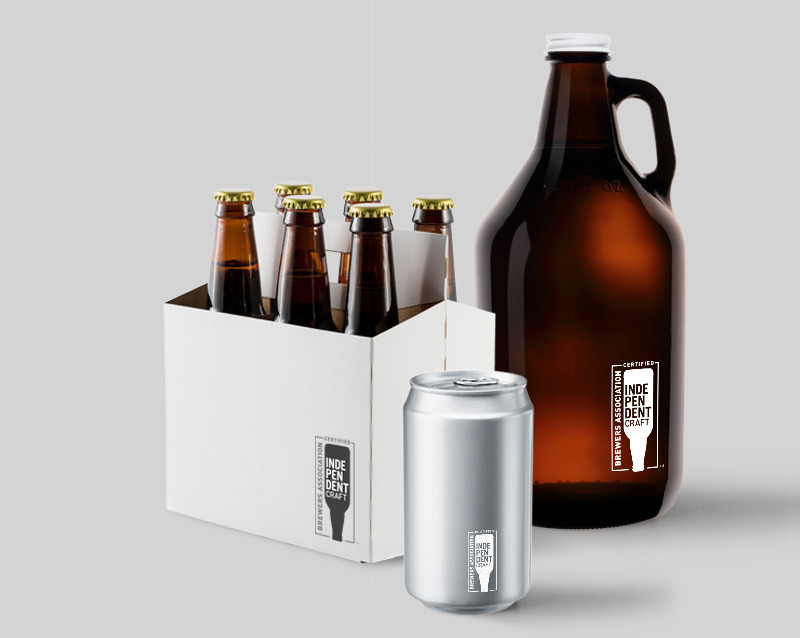 Will such a seal affect how beer drinkers make choices in the beer aisle? Probably to some degree, at least. A recent consumer survey from the Nielsen marketing research group indicates roughly a third of craft beer buyers prefer beer that is not mass-produced.

McCormick says the craft brewers seal "will allow people to identify craft brands" and, probably, significantly influence what they buy.

"All other things being equal, if you have two brands next to each other, one independently or family owned, and the other owned by Big Alcohol, I think most people would choose the small, independently owned brand — no doubt about it," McCormick says.

"But it hasn't stopped me from buying a Grapefruit Sculpin now and then," he admits.