Accessibility links
Farm-To-Table May Feel Virtuous, But It's Food Labor That's Ripe For Change : The Salt Even the most wholesome ingredients are produced through cheap labor, often by people who are themselves poor and hungry. It's time the food world talks about that, says an award-winning chef.

Farm-To-Table May Feel Virtuous, But It's Food Labor That's Ripe For Change

Farm-To-Table May Feel Virtuous, But It's Food Labor That's Ripe For Change 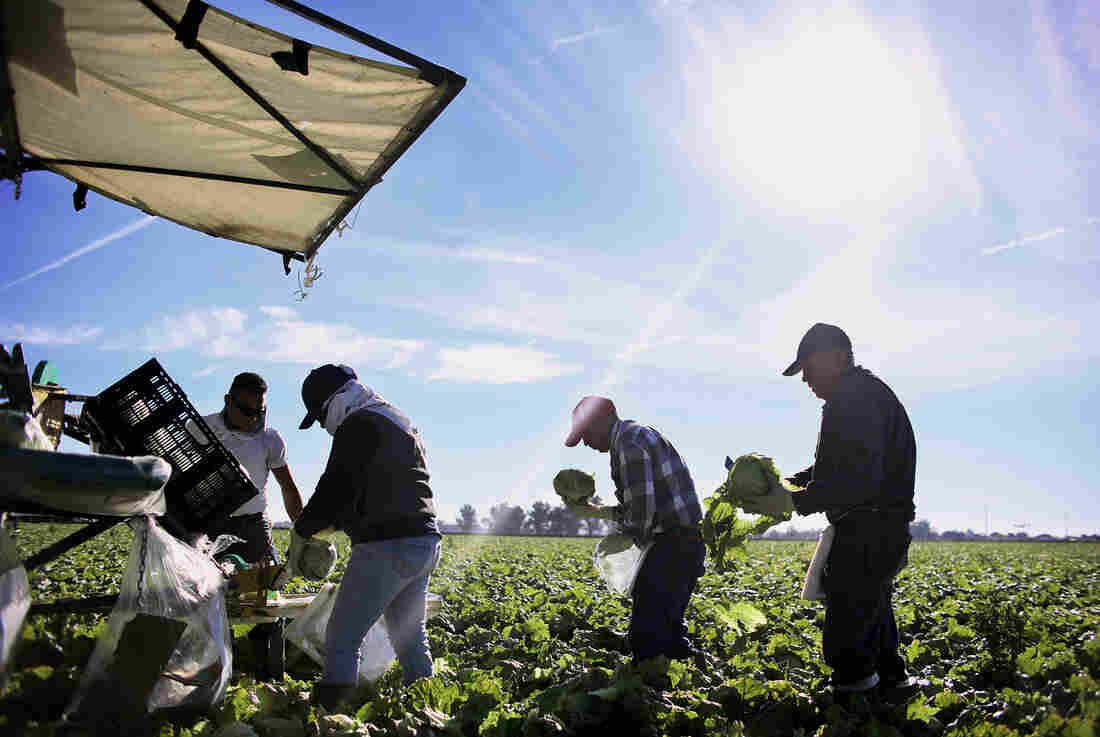 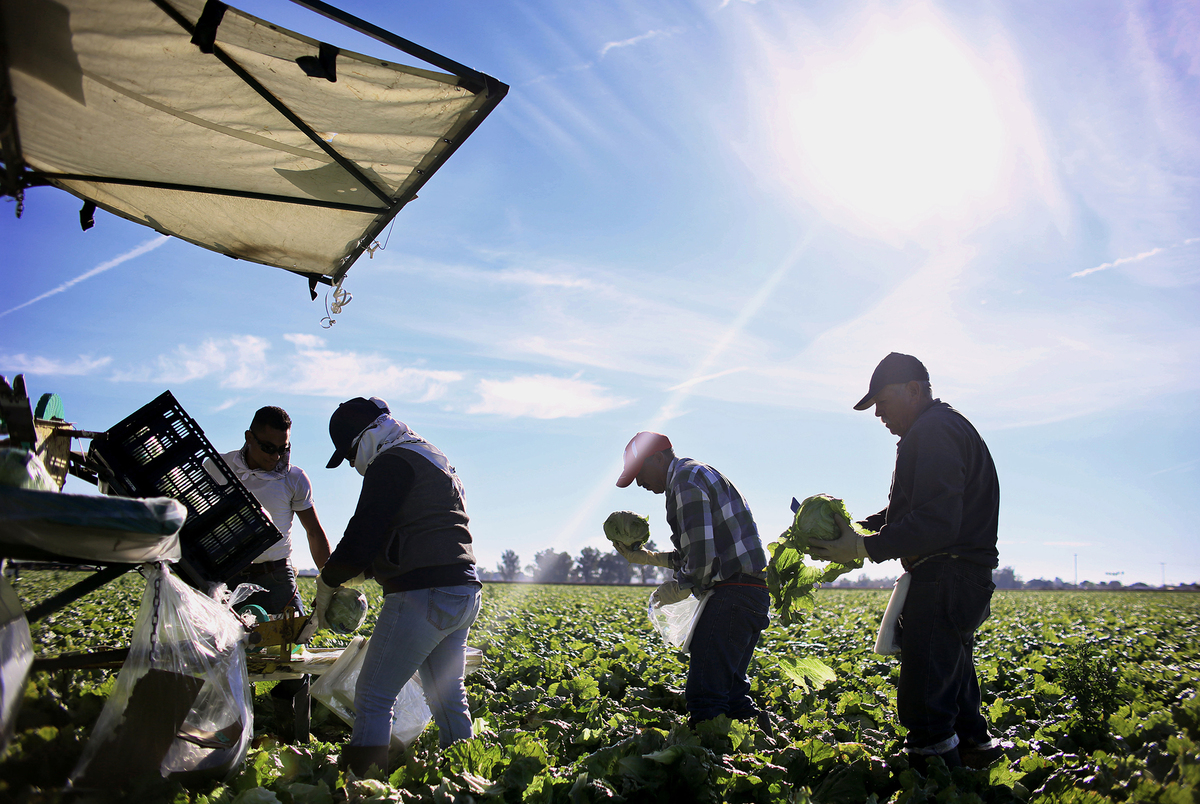 Mexican farmworkers harvest lettuce in a field outside of Brawley, Calif.

Novel and thrilling in earlier days, today's farm-to-table restaurant menus have scaled new heights of supposed transparency. The specificity can be weirdly opaque, much like an actual menu item that recently made the rounds: Quail Egg Coated in the Ashes of Dried Sheep's S***. Farm-to-table fatigue is most evident in those of us who cook in farm-to-table restaurants — Even We Are Sick of Us.

In the 15 years since Lantern opened, guests at my Asian-influenced farm-to-table restaurant have only rarely asked why a white girl from New Jersey is cooking fried rice in North Carolina alongside a kitchen crew mostly born in Mexico. The food we cook is openly and inherently inauthentic. But guests are sometimes surprised to learn that every single thing we serve isn't both local and organic, that our relatively expensive menu yields only slim profit or that we can't afford a group health plan. Diners occasionally comment that our use of Alaskan salmon or California cilantro has detracted from a truly "authentic" farm-to-table experience.

The ubiquity that makes farm-to-table meaningless also gives it its power. It has come to signify authenticity on almost any level, suggesting practices as complicated as adherence to fair labor standards, supply chain transparency or avoidance of GMOs. As farm-to-table has slipped further away from the food movement and into the realms of foodie-ism and corporate marketing, it is increasingly unhitched from the issues it is so often assumed to address.

Farm-to-table's sincere glow distracts from how the production and processing of even the most pristine ingredients — from field or dock or slaughterhouse to restaurant or school cafeteria — is nearly always configured to rely on cheap labor. Work very often performed by people who are themselves poor and hungry.

Inequality does not affect our food system — our food system is built on inequality and requires it to function. The components of this inequality —racism, lack of access to capital, exploitation, land loss, nutritional and health disparities in communities of color, to name some — are tightly connected. Our nearly 20-year obsession with food and chefs has neither expanded access to high-quality food nor improved nutrition in low-resource neighborhoods.

Only an honest look at how food gets to the table in the U.S. can begin to unwind these connections.

Food workers, as members of both the largest and lowest-paid U.S. workforce, are in a unique position to lead these conversations. Many of us have already helped incubate policy change on wage equality, organic certification and the humane treatment of animals. But a simpler and maybe even more powerful way we can be catalysts for real change in the food system is to simply tell the stories of who we are.

Take immigration. Our current policy renders much of the U.S. workforce completely invisible. This is more true in the food industry than in any other place in American life. There is a widespread disconnect on the critical role recent immigrants play in producing our food and an underlying empathy gap when it comes to the reality of daily life for these low-wage food workers and their families.

This essay was crafted in response to a summit on racism and difference in food, staged at Rivendell Writers Colony by The Southern Foodways Alliance and Soul Summit. Read more in this series.

For example, here in North Carolina, over 150,000 immigrant farm and food-processing workers harvest nearly all the local food we eat and export, but their living and working conditions would shock most Americans.

Our state produces half the sweet potatoes grown in the U.S. — 500,000 tons a year — which are all harvested by hand. A worker here has to dig and haul 2 tons to earn about $50. In meatpacking plants, horrific injuries and deaths resulting from unsafe working conditions are widespread. Farmworkers are exposed to far more pesticides than you or I would get on our spinach. Poverty wages allow ripe strawberries to be sold cheaply enough to be displayed unrefrigerated, piled high in produce section towers. Nearly half of immigrant farmworkers and their families in North Carolina are food insecure.

When as chefs we wonder whether a pork chop tastes better if the pig ate corn or nuts but we don't talk about the people who worked in the slaughterhouse where it was processed, we are creating a kind of theater. We encourage our audience to suspend their disbelief.

The theater our audience sees — abundant grocery stores and farmers markets, absurdly cheap fast food and our farm-to-table dining rooms — resembles what Jean Baudrillard famously called the simulacrum, a kind of heightened parallel world that, like Disneyland, is an artifice with no meaningful connection to the real world.

As chefs, we need to talk more about the economic realities of our kitchens and dining rooms and allow eaters to begin to experience them as we do: imperfect places where abundance and hope exist beside scarcity and compromise. Places that are weakened by the same structural inequality that afflicts every aspect of American life.

Roger Ebert described the capacity of movies to be "like a machine that generates empathy." With more expansive definitions of authenticity and transparency, restaurants can become empathy machines and diners will get a better understanding of the lives of the people who feed us.

This essay was crafted in response to a summit on racism and difference in food, staged at Rivendell Writers Colony by The Southern Foodways Alliance and Soul Summit.