Accessibility links
The Gulf Of Mexico's Dead Zone Is The Biggest Ever Seen : The Salt A record-setting "dead zone," where water doesn't have enough oxygen for fish to survive, has appeared this summer. One major cause is pollution from farms. 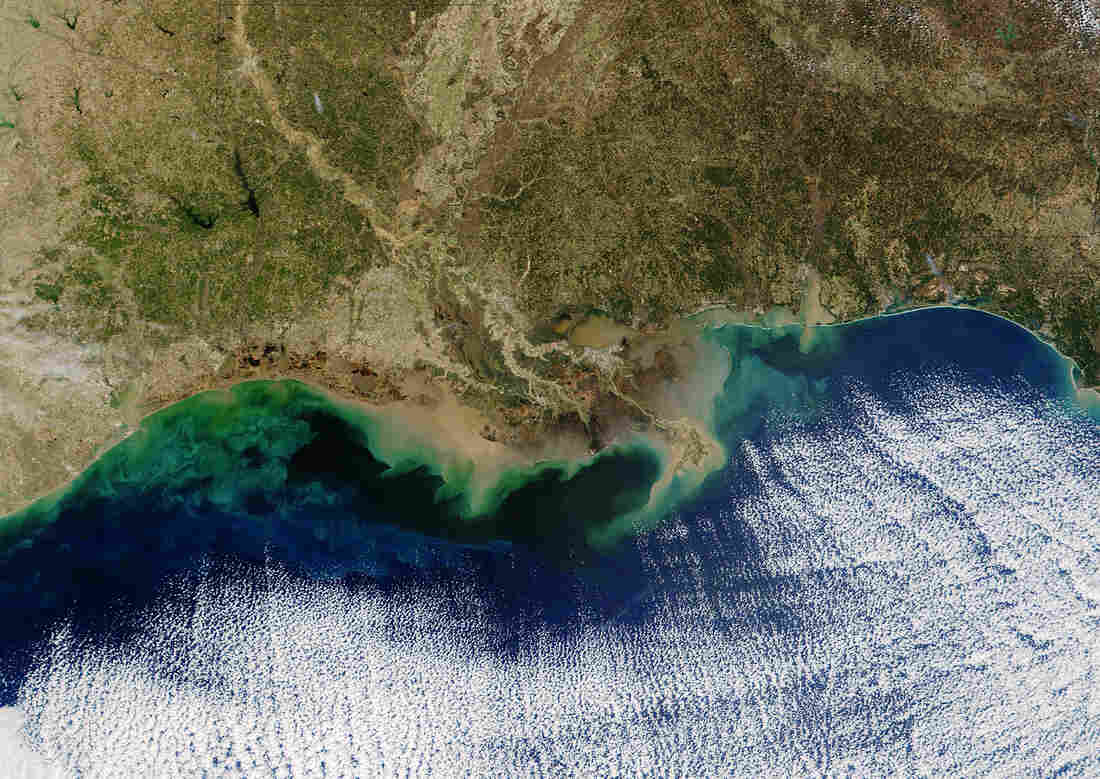 The teal blue area along the Louisiana coastline represents a "dead zone" of oxygen-depleted water. Resulting from nitrogen and phosphorus pollution in the Mississippi River, it can potentially hurt fisheries. NASA/Getty Images hide caption 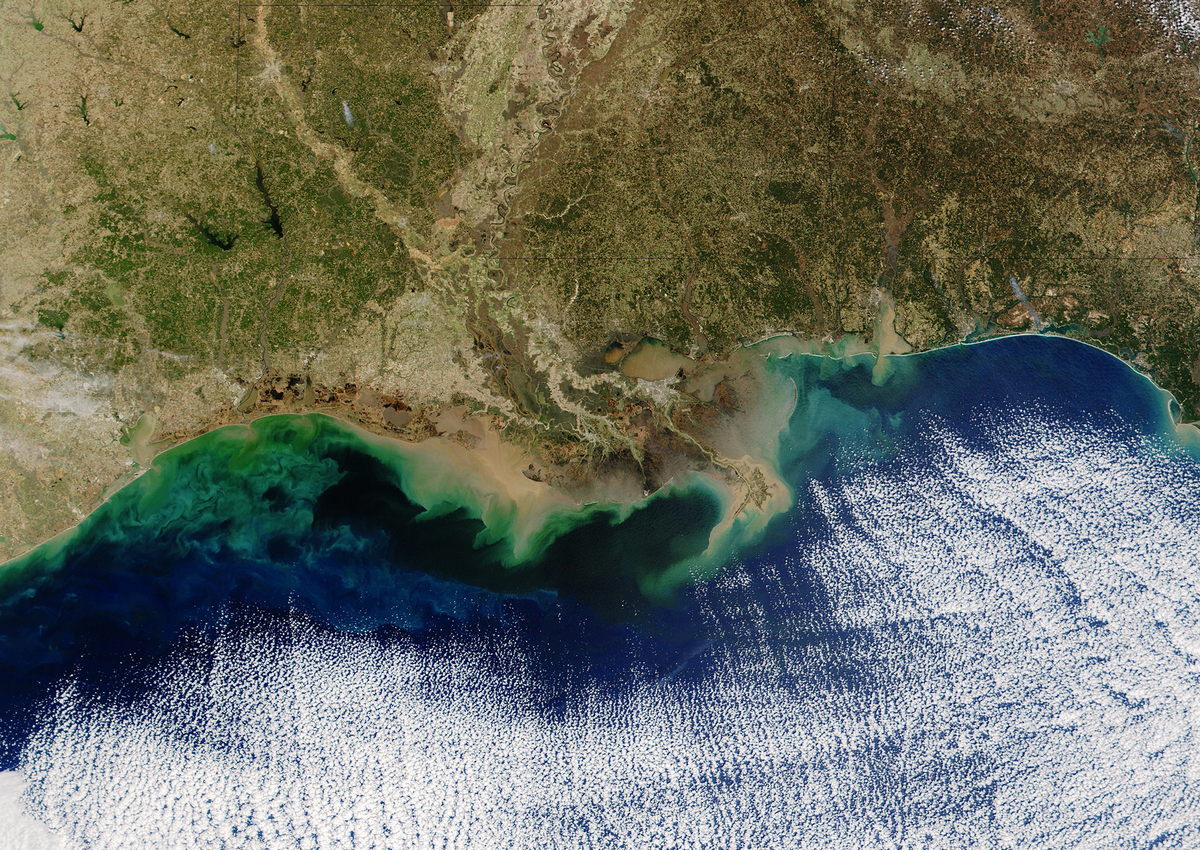 The teal blue area along the Louisiana coastline represents a "dead zone" of oxygen-depleted water. Resulting from nitrogen and phosphorus pollution in the Mississippi River, it can potentially hurt fisheries.

It has become a rite of summer. Every year, a "dead zone" appears in the Gulf of Mexico. It's an area where water doesn't have enough oxygen for fish to survive. And every year, the National Oceanic and Atmospheric Administration commissions scientists to venture out into the Gulf to measure it.

This week, NOAA announced that this year's dead zone is the biggest one ever measured. It covers 8,776 square miles — an area the size of New Jersey. And it's adding fuel to a debate over whether state and federal governments are doing enough to cut pollution that comes from farms.

The debate actually goes back many years, at least to 1985, when Don Scavia was a scientist at the NOAA. He and his colleagues asked some scientists, for the first time, to go look for a dead zone in the Gulf.

"We expected it to be there," Scavia recalls. They expected to find it because they knew that the Mississippi River delivers a heavy load of nutrient pollution, specifically nitrogen and phosphorus, into the Gulf.

Every year, the National Oceanic and Atmospheric Administration tasks scientists with measuring the dead zone in the Gulf of Mexico. This year's map, based on that data, shows a zone the collective size of New Jersey. Courtesy of NOAA hide caption

"Most of the nitrogen and phosphorus that drives this problem comes from the pper Midwest," Scavia says. "It's coming from agriculture."

Farmers use those nutrients on fields as fertilizer. Rain washes them into nearby streams and rivers. And when they reach the Gulf of Mexico, those nutrients unleash blooms of algae, which then die and decompose. That is what uses up the oxygen in a thick layer of water at the bottom of the Gulf, in a band that follows the coastline.

"Fish that can swim will move out of the way. Organisms that are living on the bottom, that the fish feed on, can't move, and they often die," says Scavia, who now is a professor of environment and sustainability at the University of Michigan.

The record-breaking dead zone this year is the result of unusually heavy rains in the Midwest, which flushed a lot of nutrients into the Gulf.

The dead zone is invisible from the surface of the ocean. Scientists lower instruments into the water to measure oxygen levels near the bottom. But Scavia describes it as a kind of hidden environmental disaster. "You know, it's 8,000 square miles of no oxygen. That can't be good!" he says. Potentially, it could have huge economic costs as well, because it imperils Louisiana's shrimp industry.

Federal and state agencies have promised to take action against the dead zone. As part of their "action plan" to shrink it, they're encouraging Midwestern farmers to try to keep nutrients from washing away by doing such things as planting wide grassy strips along streams to trap fertilizer runoff.

Scavia, however, recently published a blog post calling these voluntary measures inadequate. In a separate scientific paper, he also calculated that meeting the government's goal for a smaller dead zone will require dramatic cuts in nutrient pollution from farms.

Scavia argues that the Gulf should get the same kind of protection as the Chesapeake Bay, on the East Coast. The Chesapeake has had a similar dead zone problem. In 2010, though, despite fierce objections from farmers, the federal government set mandatory limits on nutrient pollution entering the bay. State governments spent billions of dollars to meet those targets. Now pollution in the bay is down, and some wildlife in the Chesapeake is starting to recover.