Accessibility links
How The 'Battling' Kellogg Brothers Revolutionized American Breakfast : The Salt A century ago, two brothers took the world by storm with their mass-produced boxed cereal. Medical historian Howard Markel chronicles the contentious relationship between the creators of Corn Flakes. 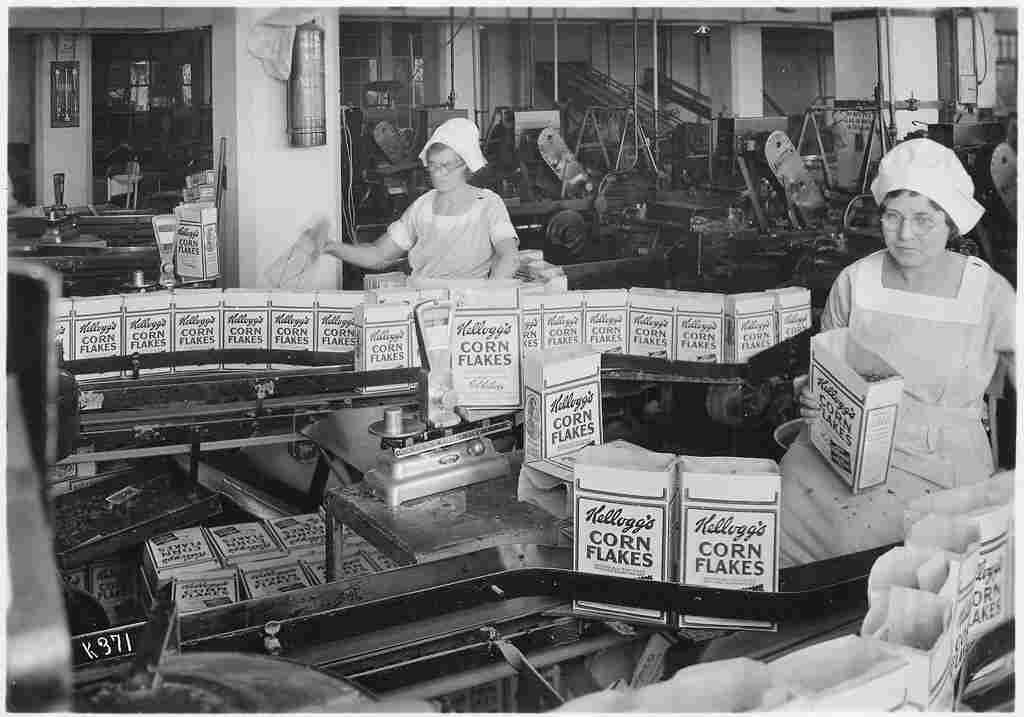 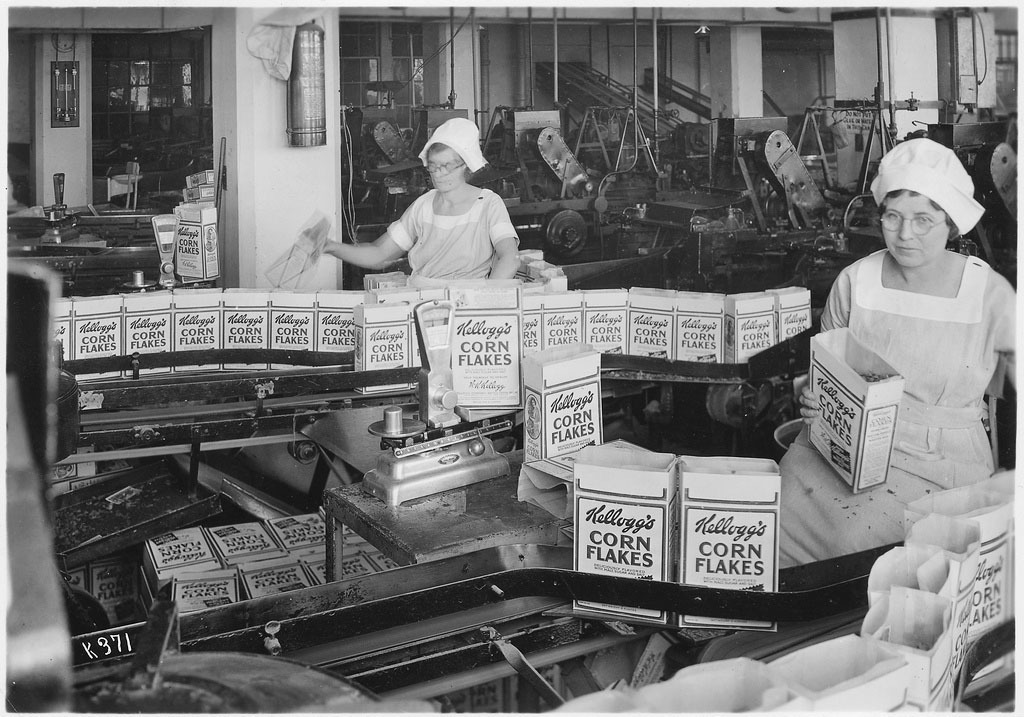 Women inspect filled boxes of Corn Flakes in the Kellogg Company factory in 1934.

Today, the typical American grocery store might devote an entire aisle to breakfast cereal, but that wasn't always the case. In fact, boxed cereals were an invention of the 20th century, designed and marketed by two brothers from Michigan.

Dr. John Harvey Kellogg had first conceived of a healthy, plant-based breakfast in his capacity as the director of the Seventh-day Adventist sanitarium in Battle Creek, Mich. His younger brother, Will, was the business innovator, who figured out how to market John's creation.

Medical historian Howard Markel describes the mass production of Kellogg's Corn Flakes in 1906 as an event that took the world by storm. "You could simply pour breakfast out of a box," he says. "Even dad could make breakfast now." 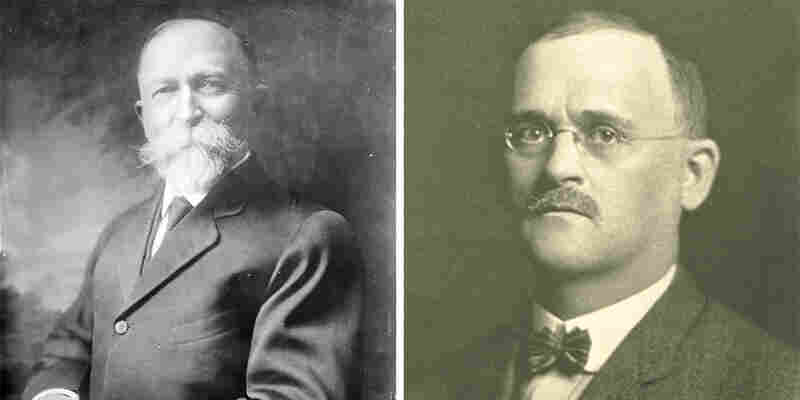 While Dr. John Harvey Kellogg (left) was prescient about the concept of wellness. His brother, Will Keith Kellogg, right, was the marketing mastermind behind the Kellogg company's success. Library of Congress/Wikipedia; Will Keith Kellogg Foundation/Wikipedia hide caption

But despite their business success, the brothers' relationship was contentious. A series of lawsuits ended with the Will being awarded the rights to the family name.

"Will later made a mint off of bran cereals, even though that was truly John Harvey's creation," Markel says. "There was a lot of bad blood between them, and then after the lawsuit they rarely, if ever, spoke to one another again."

On American breakfast before the days of boxed cereal

If you look at what people ate in America in the late 19th century or even the early 20th century, it was very heavy in animal fats, often cured meats. So they're very salty, a lot of sugar. You would have for breakfast, potatoes that were fried in the congealed fat from the night before. A lot of alcohol and caffeine [were] consumed, a lot of carbohydrates. 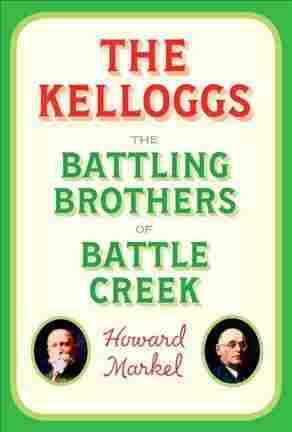 The Battling Brothers of Battle Creek

And making breakfast was an ordeal. Even if you made porridge or mush, these whole grains took hours to melt down and make into a mush or a soft form. So these poor mothers were getting up very early and they're probably taking care of their children all night. They had to start a wood burning fire. And so making breakfast was a great ordeal.

But John Harvey Kellogg invented [cereal] for the [invalid] people who came to his Battle Creek sanitarium. It was his little brother Will who realized there are a lot more people who are healthy and just want a convenient, tasty breakfast, than those who are ill and need an easily digestible breakfast.

On how the flake cereal was born

[The brothers] first started serving double-baked zwieback biscuits out of whole graham grain. ... [Dr. Kellogg] decided to grind up the zwieback into little crumbs, and that was their first cereal. He called it granola.

[Dr. Kellogg] called it "biologic living," and he was really prescient about this. Don't forget, at the turn of the last century, most doctors were fixated on diseases — not preventing them, but treating them once they occurred. ... Dr. Kellogg was all about preventing these diseases before they ever happened, by living a healthy life. That included exercise, a lot of vigorous physical activity, eating a grain and vegetable diet, avoiding animal fats or meats or as he called it, "flesh-eating." ... No alcohol, no caffeine of any kind.

John Harvey, even as a young boy and a young man, just exuded brilliance and was curious about everything. ... The co-founders of the denomination ... realized this young man was quite special, so they groomed him and a big part of Seventh-day Adventism.

He later came to edit their magazine called The Health Reformer, which John Harvey later changed the name to Good Health, because he realized that people don't like reform. They like to be healthy, but they don't want somebody telling them to reform. So they realized that John Harvey could be the head of their health avenue, the health section of their denomination.

On Will, the marketing genius

John, the older brother, never missed an opportunity to pick on or humiliate his younger brother, from childhood on. ... Will was this business genius who knew how to run a very large organization, not only keep accounts, but come up with new methods to keep accounts in a better way. He was brilliant at human resources, because you had thousands of employees doing all sorts of different tasks, and he just had his hand in every pot, and knew how to do it. ... The psychic cost of being made fun of and treated as a lackey was very difficult for Will's psyche.

On the brothers' fight over the brand name Kellogg's

As soon as poor Will became successful and John Harvey sold him the rights and made a mint off of Corn Flake stock, [John Harvey] started making his own cereal and calling it "Kellogg's." And, of course, Will, by this time ... was investing millions of dollars a year in ads, and he felt that another Kellogg-named product, that was not nearly as tasty as his product, would harm his company.

So he sued John Harvey, and then John Harvey sued Will. And this lawsuit, even though there were peaks and valleys and agreements and disagreements, it went for almost a decade, going all the way to the Michigan State Supreme Court. The basic question was, "Who was the real Kellogg? Who had the right to use the name Kellogg on a box of cereal?"

Will said, "Everybody who hears the name Kellogg's thinks of Corn Flakes now." By that time — this is early 1920 — they did.

The judges agreed with Will and he won the case, and poor John Harvey had to pay all the legal costs and everything else, and he could only put his name in tiny writing on the bottom of the box for any cereal he created.

Read an excerpt of The Kelloggs

Sam Briger and Heidi Saman produced and edited the audio of this interview. Bridget Bentz and Molly Seavy-Nesper adapted it for the Web.