Accessibility links
When Oceans Give You Jellyfish Blooms, Turn Them Into Tasty Chips : The Salt Scientists think human pressures on oceans could cause more jellyfish blooms. What to do? Eat them, says a Danish gastrophysicist who has cracked the science of making them palatable.

When Oceans Give You Jellyfish Blooms, Turn Them Into Tasty Chips

When Oceans Give You Jellyfish Blooms, Turn Them Into Tasty Chips 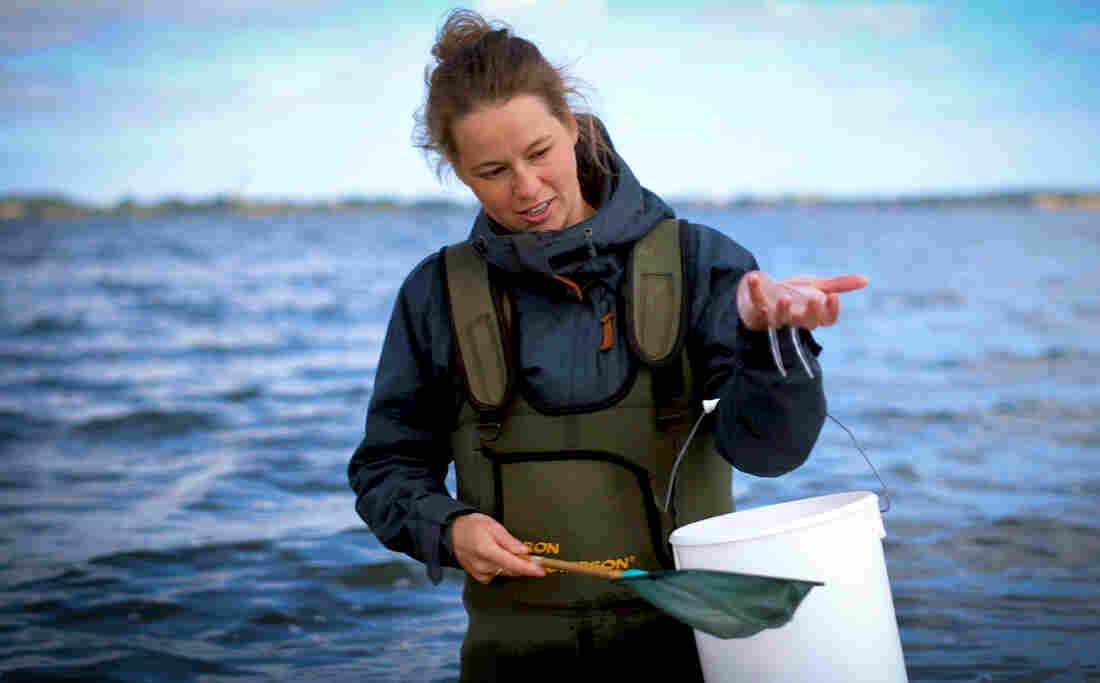 Gastrophysicist Mie Thorborg Pedersen holds a jellyfish — or a potential snack. She has come up with an "embarrassingly simple" process for making jellyfish chips. Anders Boe/Courtesy of SDU hide caption 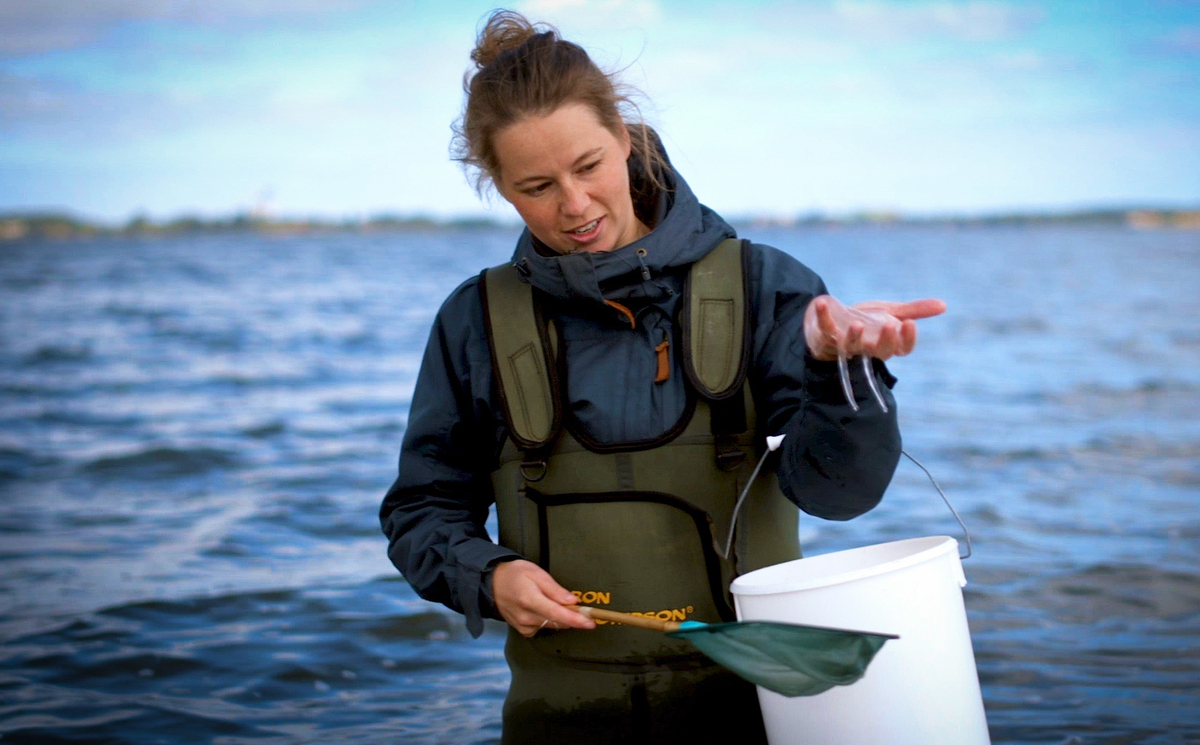 Gastrophysicist Mie Thorborg Pedersen holds a jellyfish — or a potential snack. She has come up with an "embarrassingly simple" process for making jellyfish chips.

Even marine biologists have historically cast aside these bothersome interlopers when conducting surveys of more "important" ocean species.

But there is some evidence that climate change is causing a rise in jellyfish populations. And if that is true, it may soon become hard to ignore these creatures.

The scale of the problem is scientifically hard to gauge, as historical data is in short supply, and seasonal blooms are a natural part of jellyfish life cycle. But in localized situations, there is no question that large smacks of jellyfish can wreak havoc on things like fishing nets and nuclear power plants, where they've caused shutdowns by clogging the pipes that bring cool water into the facilities.

What to do? Open your mind and your mouth, says Mie Thorborg Pedersen, a gastrophysicist at the University of Southern Denmark.

Pedersen says it was "pure curiosity" that started her down a path of jellyfish culinary experimentation. But now that she has discovered an "embarrassingly simple" method for producing light and crispy jellyfish chips, the abundance of this food source gives her finding an added weight.

It's just the latest weird food news to come out of Denmark, where the zany New Nordic cooks have been gleefully experimenting with things like citrus-flavored ants, shrimp heads and grasshopper-derived garum (a kind of fish sauce) for years, in the hopes of making sustainability palatable.

Only, jellyfish-as-cuisine is not exactly news. In Asia, people have been chewing Rhopilema esculentum for hundreds, if not thousands of years. The traditional process for turning slimy sea blobs into edible, noodle-like strips involves a labor-intensive month of treating the jellyfish with salt and alum — elements that are also used to tan leather. The result (according to a survey of the English-speaking Internet) is akin to eating "salty rubber bands," "chicken cartilage" or, delightfully, "biting a skeleton (with) a rubber coating." All of which might explain why this delicacy has never really caught on in the West. 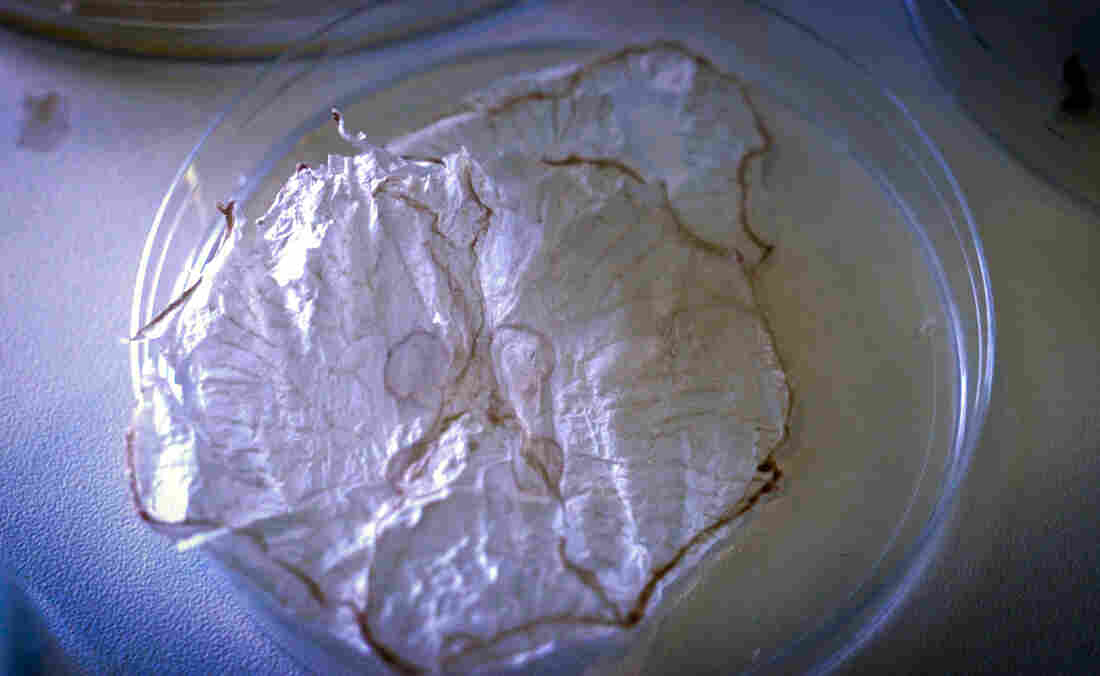 Jellyfish are about 95 percent water. Pedersen has found a way to remove most of it, transforming an entire moon, or common, jellyfish into a single thin chip. Anders Boe hide caption

Jellyfish are about 95 percent water. Pedersen has found a way to remove most of it, transforming an entire moon, or common, jellyfish into a single thin chip.

So what is the magic recipe? Take one common jellyfish (Aurelia aurita), submerge it in 96 percent ethanol in a plastic box, stick it in the fridge for a few days, place on a baking sheet at room temperature to let the alcohol evaporate and — voilà! — a jellyfish chip.

This, she says is the beauty of gastrophysics, a field that melds the playful innovation of any good cook with the resources and knowledge of a science laboratory.

"There are often food processes that have continued, maybe for thousands of years, that get passed down from housewife to housewife, where you do things, but you don't really know why you do things," Pedersen says. For example, she says, no one had ever really tried to explain how the traditional Asian jellyfish salting process resulted in something crunchy. So she started there. "And then sometimes when you understand it, you can begin to develop new things: 'Oh this is how it works. Maybe we could do this other thing instead.' "

For Pedersen, the breakthrough happened when she started to think of jellyfish as gels, whereas traditionally they have probably been treated as a kind of alterna-fish. Her scientist's understanding of how gels behave in alcohol took her to the next step. 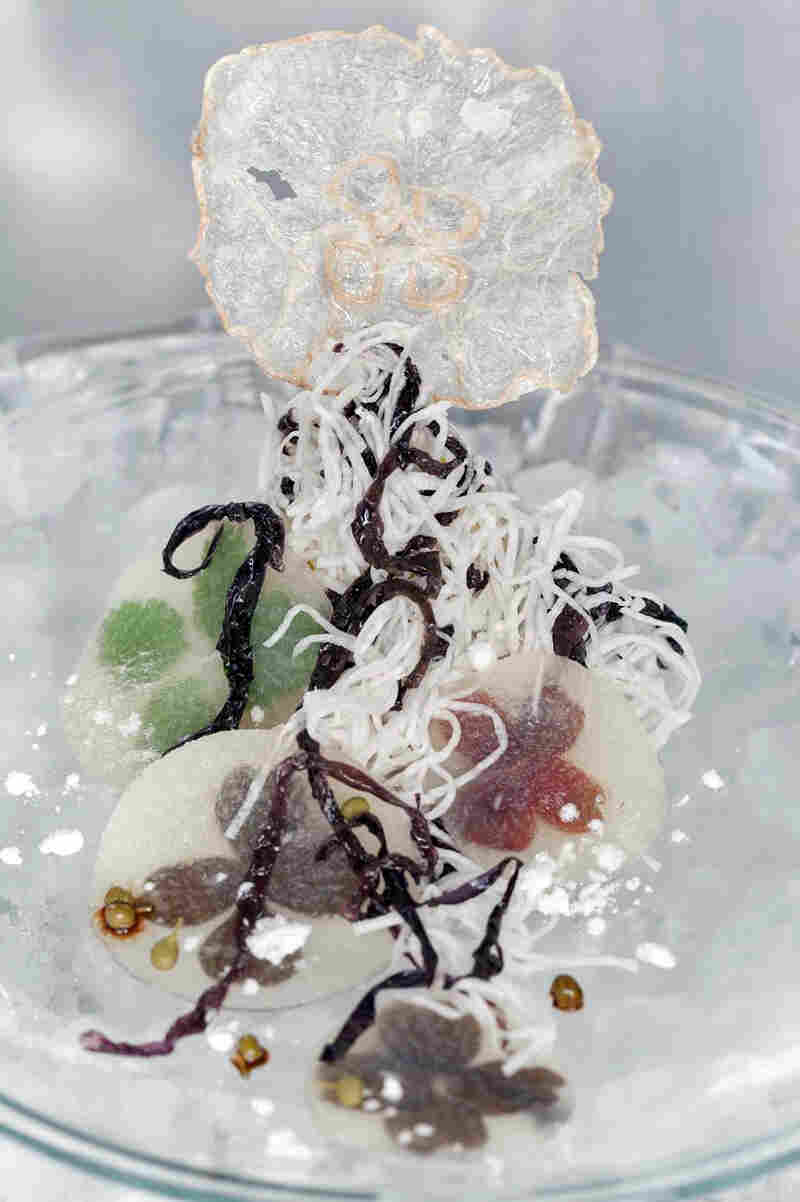 While the nutritional value of jellyfish chips hasn't yet been measured, chef Klavs Styrbæk says they pair particularly well with fresh veggies, which could earn them a healthy reputation. Courtesy of Kristoff Styrbæk hide caption 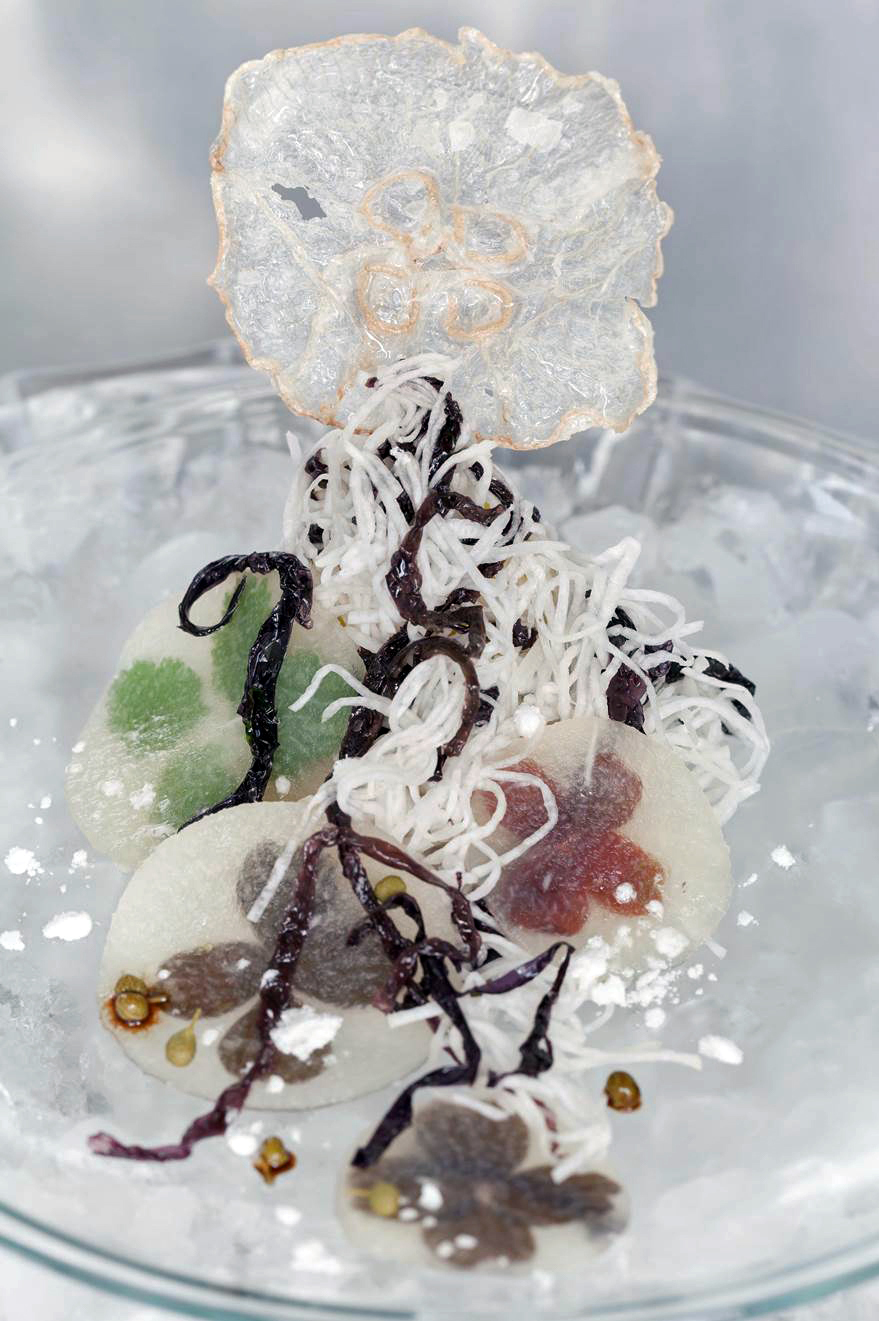 While the nutritional value of jellyfish chips hasn't yet been measured, chef Klavs Styrbæk says they pair particularly well with fresh veggies, which could earn them a healthy reputation.

Pedersen has not yet experimented with lower concentrations of alcohol, which would make for a more accessible process (and potentially whiskey-flavored chips). So she is hesitant to make declarations of DIY-ability. She also shies away from talking up the chips' nutritional value because that is not something she has measured. (Traditionally processed jellyfish falls into a cost-benefit no man's land of low fat, some protein and loads of salt.)

But Pedersen has found the yin to her yang in Danish chef and author Klavs Styrbæk, who becomes almost breathless with excitement when he imagines the possibilities.

"Mie hasn't made a finished product. She has made a raw product for gastronomy. She's made a product for us to work with and experiment with," he says, adding, "If people don't like it, then it's the chef's fault for adding the wrong flavors."

If Pedersen's process does work with other types of alcohol, Styrbæk, who has played with traditionally processed jellyfish in his own kitchen, knows exactly where he would start. "English gin with cucumber flavor — that's what I'd grab right away, because cucumber and jellyfish are so delicious together. The salt and the freshness of the cucumber ..." He drifts into a reverie.

Styrbæk admits that once Pedersen's jellyfish chips move out of the lab, they may well become stranded on three-star plates for a period of time.

"But once you begin to see them in fantastic restaurants in New York and London and Copenhagen, and you begin to think 'Holy cow, there's an idea for a product that people will talk about,' then I have no doubt that someone will see the marketing fantasy in this product — especially when you have the whole world to draw on." And a whole world of jellyfish blooms to combat. Jellyfish chips with that burger, anyone?

Sidsel Overgaard is a journalist based in Denmark, with probably a little too much fondness for toothbutter.