Accessibility links
An Iraqi-Kurdish-Israeli Dumpling Soup Makes Its Way To America : The Salt To make kubeh soup, braised beef is stuffed into semolina and ground bulgur dumplings. Brought to Israel by immigrants, this time-consuming dish has become one of the nation's culinary treasures. 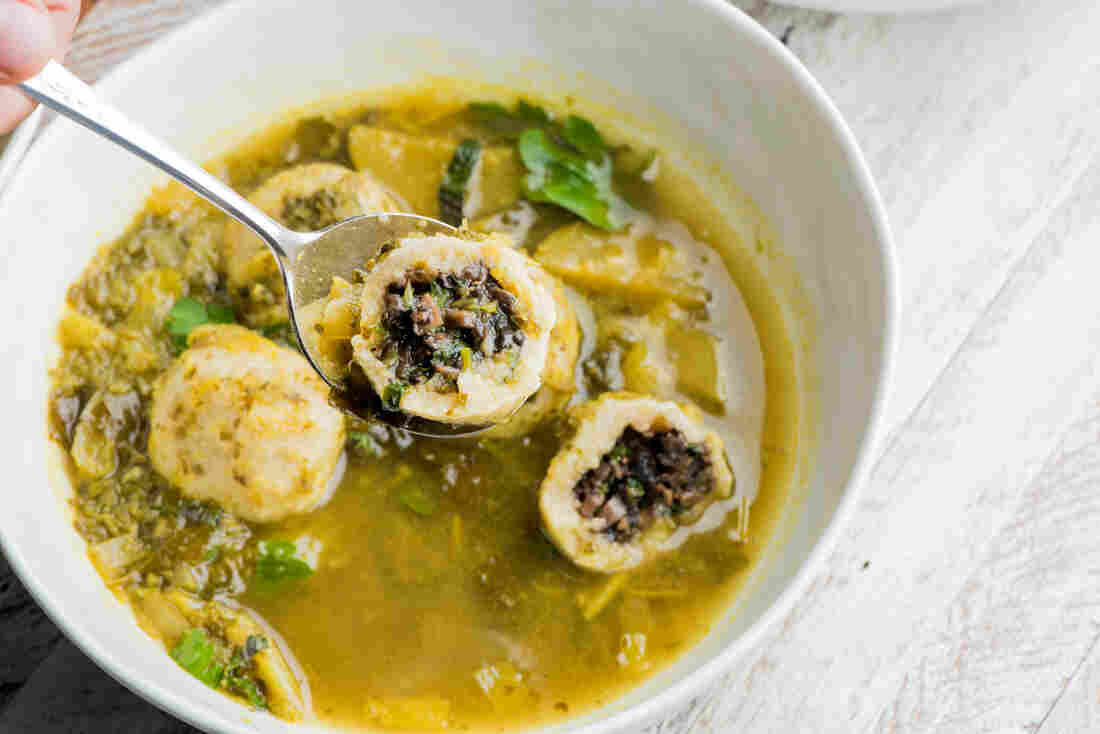 Melanie Shurka dedicates hours to make the Iraqi and Kurdish dumpling soup kubeh. It has become a beloved dish in Israel and a defining food of Mizrachi cookery, or the food of the Jews who settled in the Middle East. Rebecca Fondren hide caption 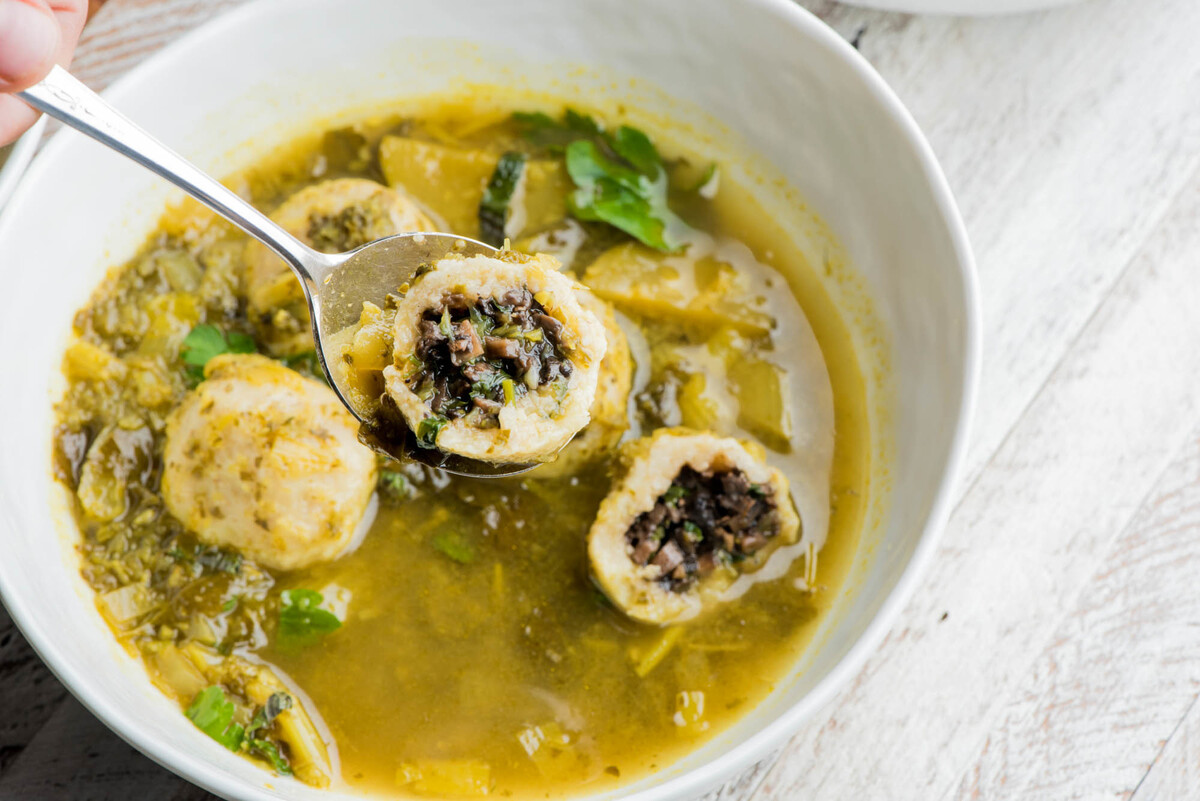 Melanie Shurka dedicates hours to make the Iraqi and Kurdish dumpling soup kubeh. It has become a beloved dish in Israel and a defining food of Mizrachi cookery, or the food of the Jews who settled in the Middle East.

To make the Iraqi and Kurdish dumpling soup kubeh, Melanie Shurka dedicates hours. There are the broths to make, such as the beet-based selek or the lemon-infused hamusta enhanced by rounds of zucchini and Swiss chard. But more time is dedicated to making the dumplings themselves.

She and her cooks in New York City braise beef until it has collapsed on itself. Small palmfuls are then carefully tucked into a dough of semolina and ground bulgur, shaped into a ball with the corners of the dough kissing, and finally rolled out into a disk that's plunged into hot broth.

The process requires skills that can only be taught by someone who has entrusted their recipe and technique to another. Perhaps because this dish is so difficult to make, Shurka, who is half Israeli and half American, has become the first person to dedicate a restaurant, fittingly named "Kubeh," to it in the U.S.

She brought it to the U.S. not from the soup's original home, but from its adopted one, Israel, where it's a comfort food staple made by gifted home cooks for the Sabbath and in small restaurants that dot some of the country's outdoor markets, most notably the one in Jerusalem.

Marak kubeh, or kubeh soup, most likely arrived in Israel in the 1950s with a wave of Iraqi immigrants (though a small group of Kurdish immigrants may have brought the dish with them to Palestine in the 1930s). These Jews had been eating it "within their community for hundreds, perhaps thousands of years," explains cookbook author Joan Nathan.

First made in their homes in the new state, it provided these immigrants with a connection to their past. Even during a time when meat was scarce and culinary indulgence was often intentionally pushed aside in the name of building the country, hours and care were dedicated to making the soup properly. If the exteriors of the dumplings are too thick, they become cannon balls; too thin and they fall apart, muddying the soup. In certain communities, striking that balance is the mark of being more than just a talented cook. The quality of a woman's kubeh (and its cousin, kibbeh) is "a test of their refinement and elegance," Yotam Ottolenghi and Sami Tamimi explain in Jerusalem: A Cookbook.

Members of these communities opened restaurants like Rachmo, Azura and Morduch in Jerusalem, introducing the dish to a broader Jewish audience, Shurka explains.

In the U.S., "there's no restaurant where someone from the MTA and Barack Obama would sit back to back," says Naama Shefi, who founded the Jewish Food Society. "But in Israel, at Azura, you could definitely see someone like Bibi [Netanyahu] next to a bus driver," eating the restaurant's famed kubeh and hummus.

The soup has woven itself into Israeli culture. "It became the culinary term most identified with Mizrachi cookery," or the food of Jews from the Middle East, Gil Marks noted in the Encyclopedia of Jewish Food. It's "the equivalent of the Ashkenazi gefilte fish."

Shurka is not the only person with ties to Israel in New York who longs for the soup. In 2012, Shefi, hungry to launch an Israeli culinary pop-up that was more of an artistic experiment than a business, came across a passage in Claudia Roden's The Book of Jewish Food: "When the last generation who makes kobeba or kubba has disappeared .... I hope Jerusalem keeps up her reputation as the capital, and that some food producer will decide to make them commercially, so that a whole little world of our culinary culture does not disappear." 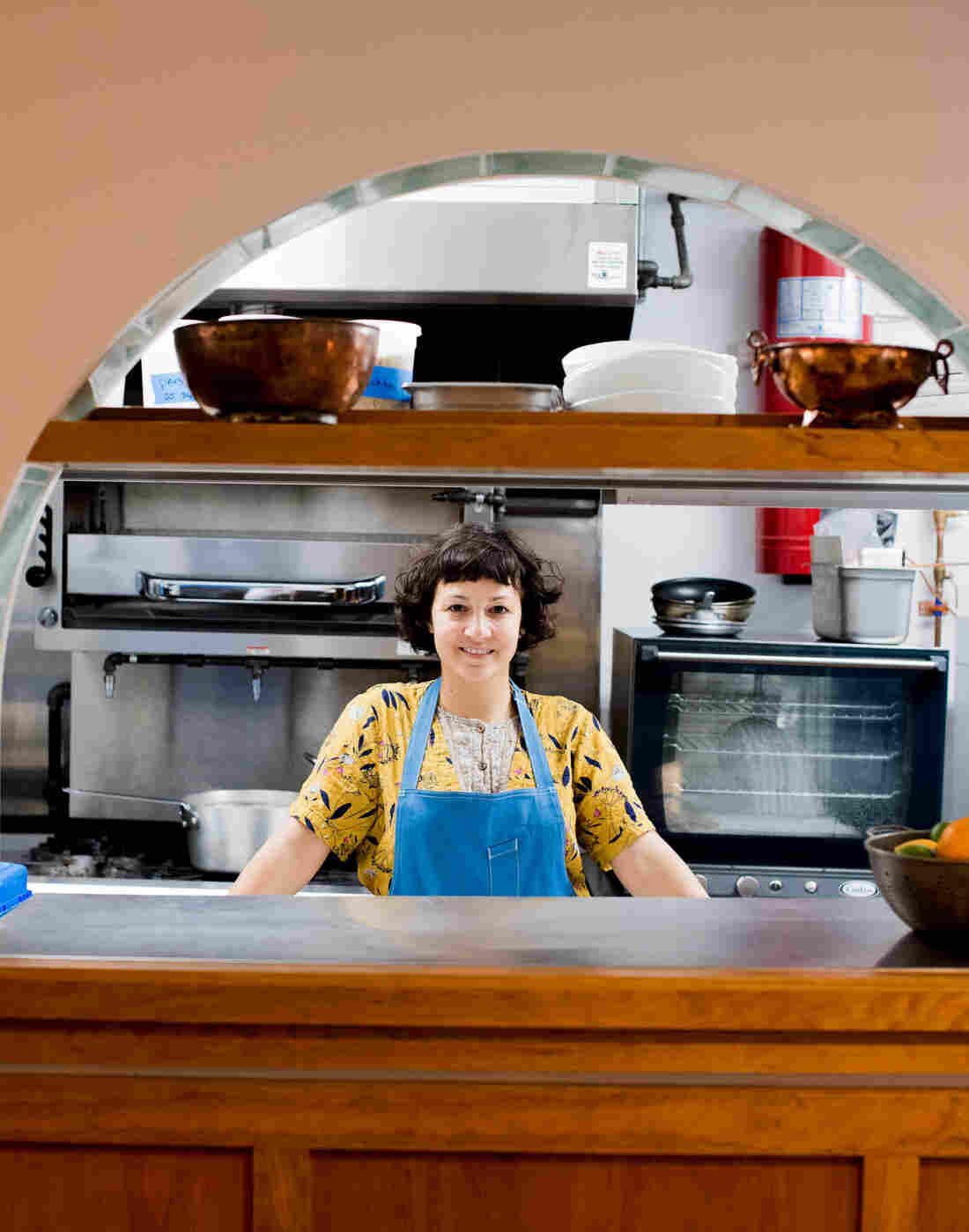 Melanie Shurka, the owner and chef at Kubeh in Manhattan, making some of her Middle Eastern dishes. Rebecca Fondren hide caption 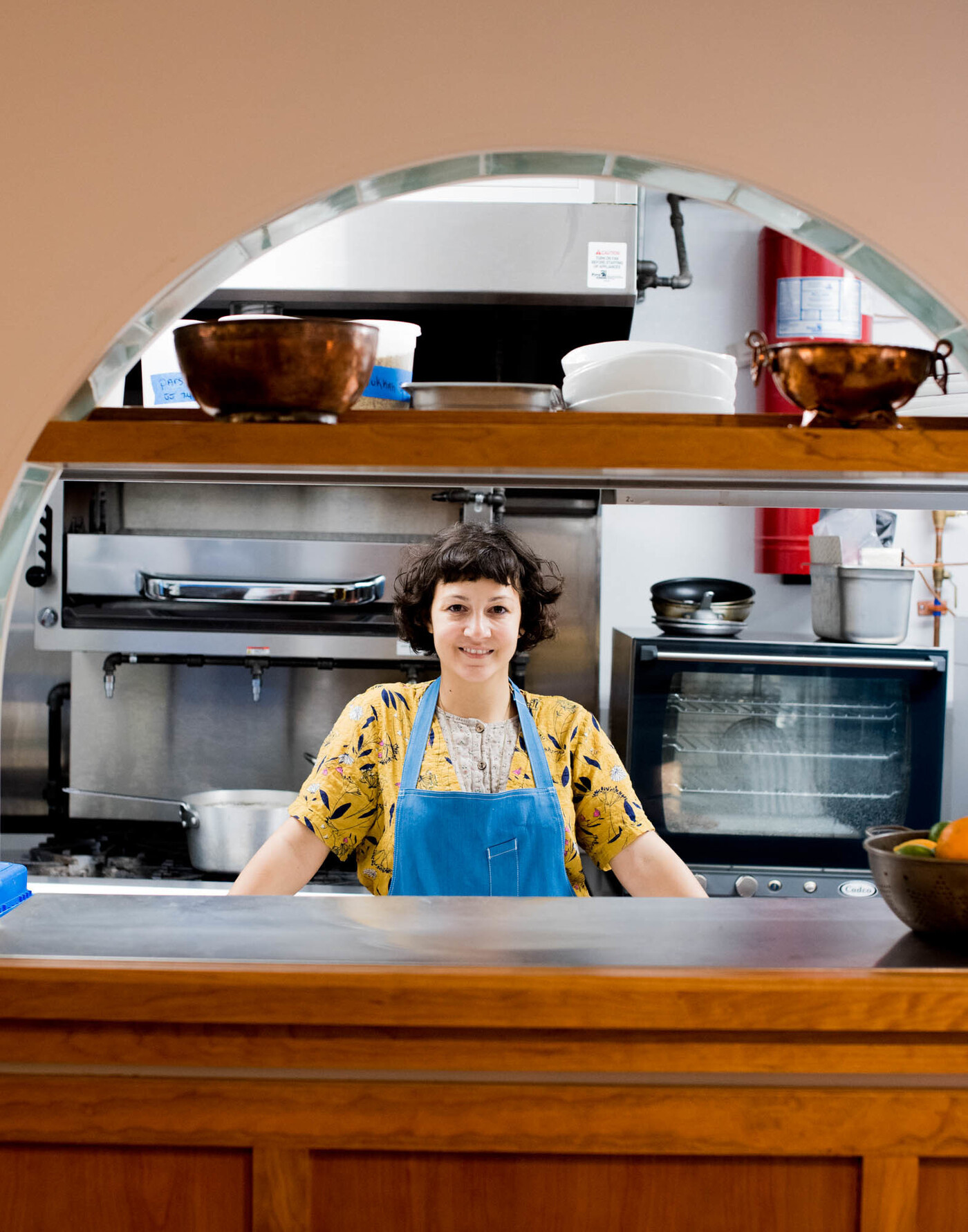 Melanie Shurka, the owner and chef at Kubeh in Manhattan, making some of her Middle Eastern dishes.

Taking that as her cue, Shefi set out to learn to make kubeh. "We by reading recipes —tons of them," she says. But, it was clear from the start that she and Itamar Lewensohn, who oversaw the kitchen for the three-week pop-up called The Kubbeh Project, would need to learn from cooks around Israel before bringing kubeh to New York.

Shurka had a similar realization, launching her kubeh quest with the few resources that exist in cookbooks and online — there are fewer than 10 videos on YouTube that show how to make the dumpling soup. She quickly realized she would need to travel to Israel to learn to make the soup properly. Before leaving, she made numerous phone calls, but people were puzzled by her interest and not eager to share their recipes. "But as soon as I got there — with Israelis, everything has to be done in person — all of the sudden, people were like, 'I'll teach you, come to my restaurant.' "

A post on Facebook led to meeting a distant family friend's aunt in her 70s who shared her recipe for Syrian lamb kubeh, which replaces the bulgur and semolina exterior with a shell of ground meat and rice. This take on the dish was born because of Passover laws that forbid Jews from eating wheat. "I hadn't had this on the agenda," Shurka says. But, a riff on that recipe, warmed with cinnamon, is now on her menu.

At another home, Shurka became something of a fascination. A cook of Kurdish descent invited several friends over who shared their tips for making the dish. They were all curious about "the American girl who wanted to make kubeh," Shurka says.

There were also the two days she spent at Rachmo, a restaurant known for its kubeh in Jerusalem, where the owner initially balked at her request. "How you dare you come into my restaurant and ask for [its] heart and soul?" she recalls him saying. After some cajoling, he welcomed Shurka into his kitchen and ultimately wished her well with her project in the U.S. 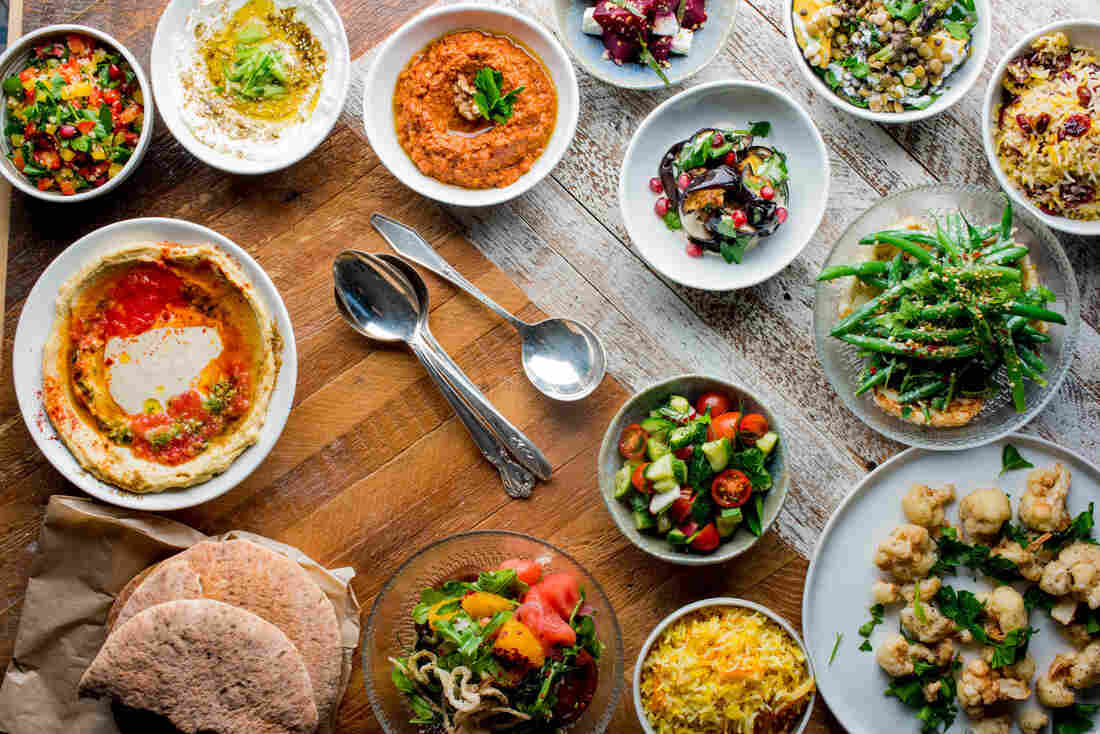 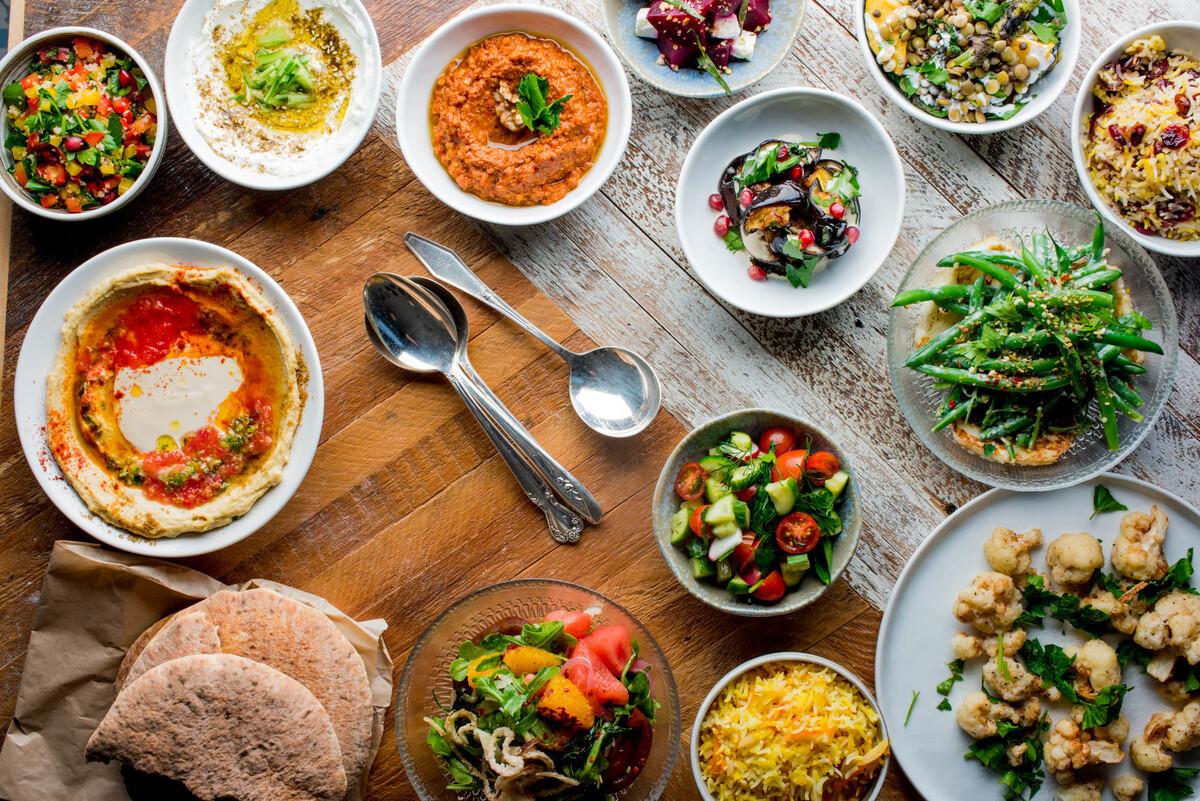 An assortment of dishes at Melanie Shurka's restaurant, Kubeh, in Manhattan.

Drawing upon research, Shurka has twisted the tradition a bit by braising instead of sauteeing the meat filling for her classic siske kubeh, and mixing and matching broths and varieties of dumplings, some of which will change throughout the year.

Still, there's skepticism about whether an American audience will embrace the dish. Shurka says when she pitched her restaurant to investors, "Israelis would say, 'We're happy you're opening, but do you think [Americans will] like it?' " Shurka is banking on the comforting nature of the soup, the universal appeal of dumplings, and a growing love of Israeli flavors within the U.S.

For Shefi, introducing kubeh to new diners may also be the key to safeguarding the food from the fate Roden foreshadowed. "In order for food to be passed from generation to generation ... the only way is to cook it and for other people to crave it," she says. "If you're not exposed to something, you won't crave it."

Devra Ferst is a food writer, editor and cooking teacher based in New York City. She's on Instagram @dferst