Accessibility links
Why ASMR Food Videos Get Senses Tingling : The Salt A growing number of food videos aim to trigger ASMR — Autonomous Sensory Meridian Response, or pleasing sensations in the brains of some viewers — by focusing on sounds like chopping and stirring. 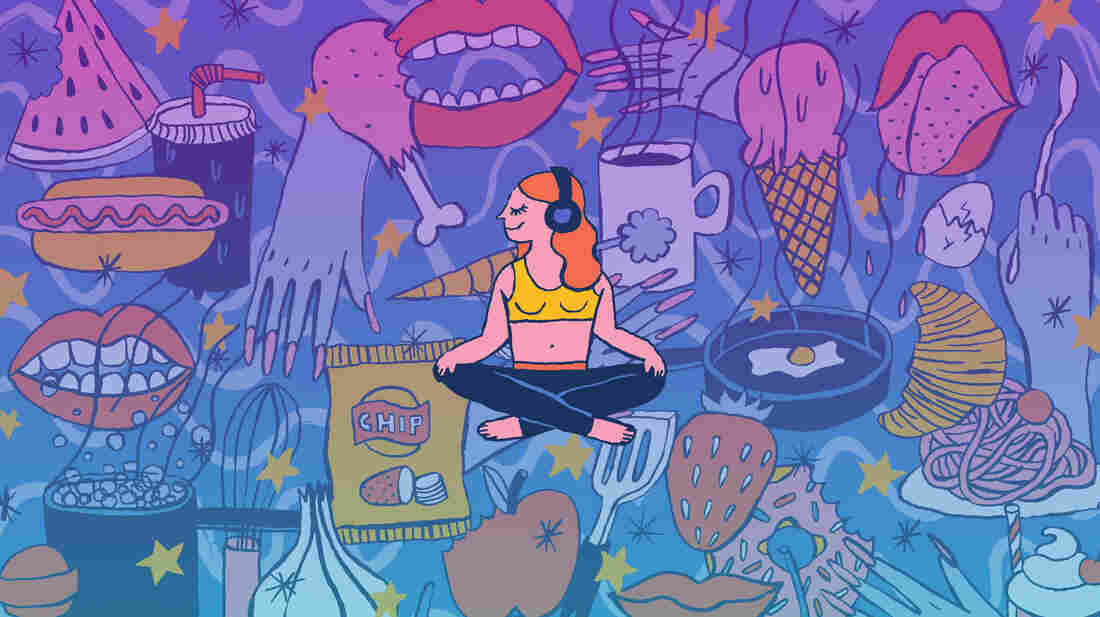 A growing number of food videos aim to trigger ASMR — Autonomous Sensory Meridian Response, or pleasing sensations in the brains of some viewers — by focusing on sounds like chopping and stirring. Christina Lee for NPR hide caption 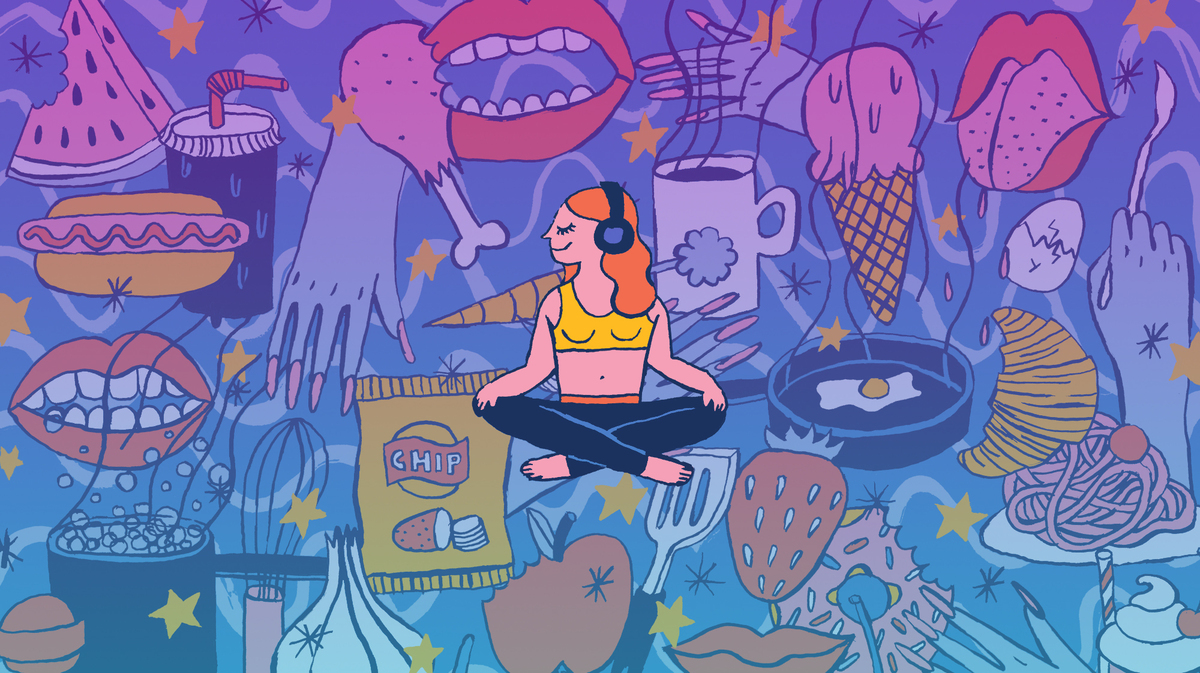 A growing number of food videos aim to trigger ASMR — Autonomous Sensory Meridian Response, or pleasing sensations in the brains of some viewers — by focusing on sounds like chopping and stirring.

Shhhhh! Come closer. A little bit closer. There you go. That's better. There's a growing food trend we want to tell you about, but it's being done in hushed whispers by video bloggers known as ASMRists.

Look away, folks with misophonia. These aren't your mama's cooking videos intended to teach you a new recipe. Instead, these are meant for viewers who experience ASMR, which stands for Autonomous Sensory Meridian Response. They're videos created to trigger pleasing tingling sensations in the brains of some viewers by focusing on specific sounds like crinkling, chopping, sautéing and stirring. Intense eating sounds like slurping, swallowing, chewing or crunching do the trick for others.

The trend is making stars out of vloggers like Taylor, a 20-year-old Florida resident with a soft giggle who goes by the moniker ASMR Darling. (She asked us to withhold her last name because of safety concerns.)

She made a 21-minute video of herself whisper-chatting viewers while slurping an icy Dr. Pepper (her "favorite"), tapping her fingernails across the top of a box of Chick-fil-A boneless chick-n-minis (another "favorite") and performing a muffled show-and-tell with a side of hash browns ("the best!," she tells her viewers.) Her ultra-quiet video drew more than 1.5 million views.

ASMR Darling's videos aren't limited to eating Chick-fil-A. In another, she role plays making breakfast "just for you." Others focus on makeup, cleaning her room or Game of Thrones role play. Chick-fil-A, however, is reserved for celebrations.

"People want another Chick-fil-A video, but I'm holding off until I hit another milestone on my channel," Taylor says. "If I hit a million subscribers, I'll probably do another."

Think of a food genre and it probably has ASMR videos: recipe reading, extreme crunching, vegan cuisine, and an ASMR spin on the Korean phenomenon known as mukbang — in this case, the vlogger quietly chats while eating surprisingly large quantities of food. Still others focus on carefully taking food apart for the camera. A Houston-based woman known as ASMRTheChew produces videos of herself snacking on candied apples, chewing gum, cracking crabs, nibbling cookies and more. But it's her pickle-eating videos that have gone viral, grabbing more than 4.6 million views combined and prompting a wave of strong feelings across social media.

My mom over here eating a pickle and all I can think of is this lady. pic.twitter.com/zXBT5YzfpD

Stephen Smith, an associate professor of psychology at the University of Winnipeg, says reports of ASMR experiences first started appearing in 2010 on YouTube and Reddit. But he says only a handful of scientific studies have been done on ASMR.

"One of the reasons is that it's the type of experience that's difficult to explain," says Smith. "From a scientific perspective, what's limiting study is that the name itself sounds unscientific. Scientists who are risk-averse don't want to study something that sounds new-agey."

He says ASMR is not recognized as a response or a mental disorder, but it's considered a perceptual sensory phenomenon — an experience some people have, similar to synesthesia, "except the tingles are associated with a feeling of relaxation."

Smith's own study, published in February in the journal Frontiers in Psychology, looked at the personality traits of people who experience ASMR. As part of that, he found that whispering, tapping and scratching sounds (used frequently in ASMR food videos) ranked high among ASMR triggers for those tuning in.

But exactly how much of the general population actually experiences ASMR is unclear.

There are currently over 134,000 subscribers to the Reddit ASMR group, says Smith. "So it must be relatively common."

Food-focused ASMR content has caught the attention of companies like KFC, Pepsi and Tastemade, which have created their own brief ASMR-style videos. Gibi, a vlogger who goes by the name GibiASMR, has done sponsored videos for Blue Apron and Thrive Market. She says she's better known for her role-playing and cosplay videos than her food-focused ones. But she's amassed more than 407,000 subscribers in the last year and now makes ASMR videos as her full-time career. (Like Taylor, Gibi asked us to withhold her surname and location over safety concerns — she's had to involve police in multiple stalking cases and says she frequently receives unsavory messages.)

"Cooking videos make for some really good sounds. You have bubbling, cutting, washing — all the good stuff," she says.

Since August 2016, Blue Apron also has been working with a handful of other well-known ASMR vloggers like Gentle Whispering ASMR, Tony Bomboni ASMR and Fairy Char ASMR to produce videos packed with ear-to-ear cardboard tapping, package crinkling, slicing and plenty of pan sizzles. Combined, these vloggers' YouTube channels have just under 2 million subscribers.

"We thought our product would be perfect for a video because the sounds of cooking with Blue Apron are so unique — the crinkling of our packaging, chopping of a knife on a cutting board, salmon sizzling on a pan, peeling carrots, etc.," says Allie Evarts, a spokesperson for Blue Apron.

Jay Holzer, global head of development and production for Tastemade, a digital food and lifestyle network, says the viewers who gravitate to ASMR videos "almost have a chemical reaction to it."

"It's bigger now than it ever has been — especially when you see companies like Blue Apron get into sponsoring it — that's never happened before," Holzer says. "The people who are into it are addicted to it, almost in a weird way. Whether it grows 10 times over the next few years, who knows?"

Tastemade's ASMR salmon carpaccio video — a minute and a half of sound-pleasing slicing, chopping, stirring and grinding, accompanied by mouth-watering close-up camera shots — has scored 4.4 million views since it was posted on Facebook in March 2016.

"That wasn't our first, but it's our biggest hit," says Holzer. "I'd say we've probably done 50 of them. A lot will run on SnapChat first. If they're successful there, we'll put them on other platforms."

While scientific studies lag behind the ASMR phenomena, Smith says he doesn't think the videos present any dangers to viewers who are able to experience the sensations they spark. And in fact, he says the videos can be used in helpful ways.

"Some [people who experience ASMR] use it to help them relax. It's like meditation for them. They watch the video and go into a meditative state, which is associated with health benefits," says Smith.

But what's clear is that the genre isn't for everyone.

"When you post an ASMR video, there's no neutral reaction to it," says Holzer. "You either think it's the greatest thing ever, or are offended by the sounds."